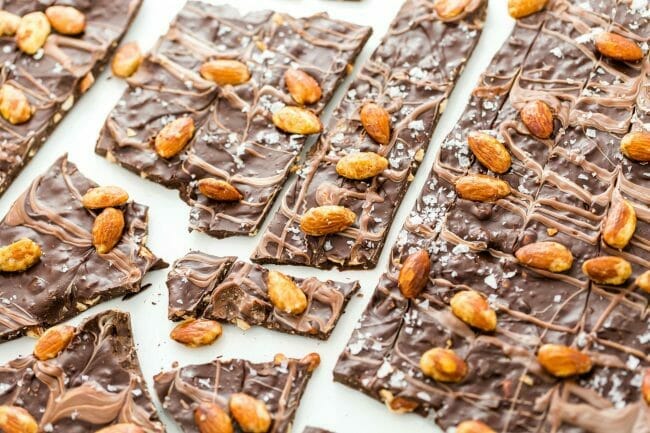 I would guess that I have made thousands of homemade chocolate confections for my kids’ parties over the years. They are fun to make and can perfectly fit into any party theme!

I do have a little secret that helps me make my homemade confections look and taste incredible- almond bark.

It melts so perfectly and coats everything with smooth, glossy chocolate that is unbeatable.

However, I often run out of almond bark and, as we all know, a kids’ birthday party must go on!

That is when I use one of these great chocolate almond bark substitutes to help me complete my candy projects.

Lots of people prefer to use almond bark to make perfectly dipped treats. Let’s take a look at what you can use in place of almond bark. It’s always good to have a backup plan!

I have often looked in my pantry for almond bark but found an empty shelf. I do use almond bark a lot so I am often running out!

However, I have found some great substitutes for almond bark that work well.

Candy melts are chocolate-like candy that are made from sugar, vegetable oil, powdered milk, and flavoring.

Candy melts also come in a whole array of colors. You don’t need to worry about dying the confection, just buy the colors you want!

Candy melts melt super smooth, just like almond bark. The melted mix may be a little thicker than almond bark but you can add a very small amount of vegetable oil to make it thinner.

Candy melts also have a similar vanilla flavor. They can be used exactly the same way as almond bark and are easily found in most craft stores.

Compound chocolate is imitation chocolate made with vegetable fats rather than cocoa butter.

Compound chocolate does have some real cocoa powder. This makes it a very flavorful substitute for chocolate almond bark.

Melt compound chocolate exactly the same way you would melt almond bark. It can be heated slowly in the microwave or over a double boiler.

Dip your treats in compound chocolate then let them set. The result will be very much like using almond bark.

Couverture chocolate is fairly expensive. It can be hard to find as well. You will need to order the chocolate online or head to a specialty chocolate store.

Couverture chocolate has a fantastic taste and is easy to use. It is a perfect substitute for almond bark when it comes to dipping.

Grab a bag of chocolate chips from your local grocery store and melt them over a double boiler. This can work well to replace almond bark for dipping treats.

Chocolate chips melt very thick. You may have to add a teaspoon of vegetable oil for every one cup of chocolate chips.

This will help thin the melted chocolate chips and make it easier to dip with.

Candiquik is a brand of chocolate candy coating that you can find in lots of grocery stores.

It is very similar to almond bark and can be used in the exact same way. Candiquik has a nice, chocolate flavor that will taste good with your dipped confections.

This will help make the white chocolate smoother and easier to use for dipping.

Vanilla frosting is a good substitute for white almond bark. It has a similar vanilla taste despite having a different texture.

Rather than dip your confessions, ice them with vanilla frosting. The appearance will be a little different but the flavor you are looking for will be there!

Melted marshmallows can be used to coat your confections in place of white chocolate almond bark.

Melt one cup of mini marshmallows in a pot over low heat along with one tablespoon of butter. Stir the mix until melted and smooth then dip in your treats!

Marshmallows are much stickier to work with but they will make your desserts sweet and tasty. The white color of the marshmallows mimics the color of white almond bark, too.

Bark Thins is a brand of chocolate snack that can be found in most grocery stores. Bark Thins are skinny pieces of chocolate that are packed with chopped nuts.

Try the dark chocolate sea salt flavored bark. It is definitely what you need as a snack substitute for almond bark.

Try your hand at making your own almond bark. It is not hard to do at all!

Check out our quick recipe below to see how you can make your own almond bark snack.

You can also follow this detailed recipe from The Beaming Baker. You only need three ingredients to make a tasty almond bark dessert!

Want to make a delicious, picture-perfect dessert? Try making your own, homemade almond bark! Here is how it is done.

It only takes about ten minutes to make homemade almond bark. Put the pieces in small, cellophane bags and give them as gifts. Everyone loves to receive homemade chocolates!

What Is Almond Bark?

Almond bark is a chocolate-like confection that is made with vegetable fats instead of cocoa butter fats.

It has flavorings and colors added in to make it look and taste like chocolate. However, chocolate almond bark isn’t chocolate at all!

Almond bark is sold in blocks or squares. It is primarily used to melt and dip confections.

Anything that you would dip into chocolate, you can dip into melted almond bark! Pretzels, dried fruit, cake pops, oreos, or even potato chips are great when dipped in almond bark.

Sometimes, almond bark has almonds mixed into the chocolate-like bars. Other times it is completely smooth. The smoother almond bark is best for melting and dipping.

Does Almond Bark Have Almonds?

Almond bark does not usually have almonds. It actually got its name since it was created to be a chocolate-like coating for almonds and nuts. The name “almond bark” just stuck!

You may see almonds sprinkled on top of almond bark but this type of bark is meant to be eaten, not used for melting.

You want a nut-free chocolate bark if you plan on dipping confections! The smoother, the better.

Is Almond Bark Better Than Chocolate For Dipping?

Many people wonder if almond bark or chocolate is better. My answer is simple. Almond bark is much better for quickly dipping treats. However, real chocolate tastes better.

Let me give you a very quick look at the pros and cons of using chocolate or chocolate almond bark to make dipped confections.

Since almond bark has vegetable fats, it melts very smooth. It also sets nicely, creating a glossy, smooth coating. It is easy to work with and makes pretty, tasty dipped treats.

Almond bark is made with artificial flavorings. It can have a “fake”, sweet taste that some people do not like. This is a matter of opinion!

Almond bark is fairly soft when it dries. It is easy to bite into or break apart. This is thanks to the vegetable fats in the almond bark.

Chocolate can burn quickly when melted. It can be very thick and hard to dip. Real chocolate also dries quite streaky unless you properly temper the chocolate.

Chocolate does have a delicious, rich taste that we all know and love. It is hard to get the taste of chocolate without using real chocolate!

When tempered chocolate dries, it has a beautiful snap and crunchy texture. It then melts in your mouth, coating your tongue in rich, vanilla goodness.

Still, have questions about almond bark substitutes? Hopefully, these frequently asked questions and answers can help you!

Can You Substitute Baking Chips For Almond Bark?

You can use baking chips in place of almond bark. However, you may want to add about 1 teaspoon of vegetable oil to the melted baking chips. This will help them be smoother and easier to dip confections into.

Is Almond Bark The Same As Baking Chocolate?

Almond bark is made from vegetable fats and flavorings. It has no real chocolate in the mix. Baking chocolate is made with cocoa butter and chocolate solids.

Can You Substitute Candy Melts For Almond Bark?

There are quite a few substitutes for almond bark that you can try. Each one will work well in place of almond bark and give you the exact results you are looking for.

I hope these substitutes help you on your next candy-making project! Enjoy.