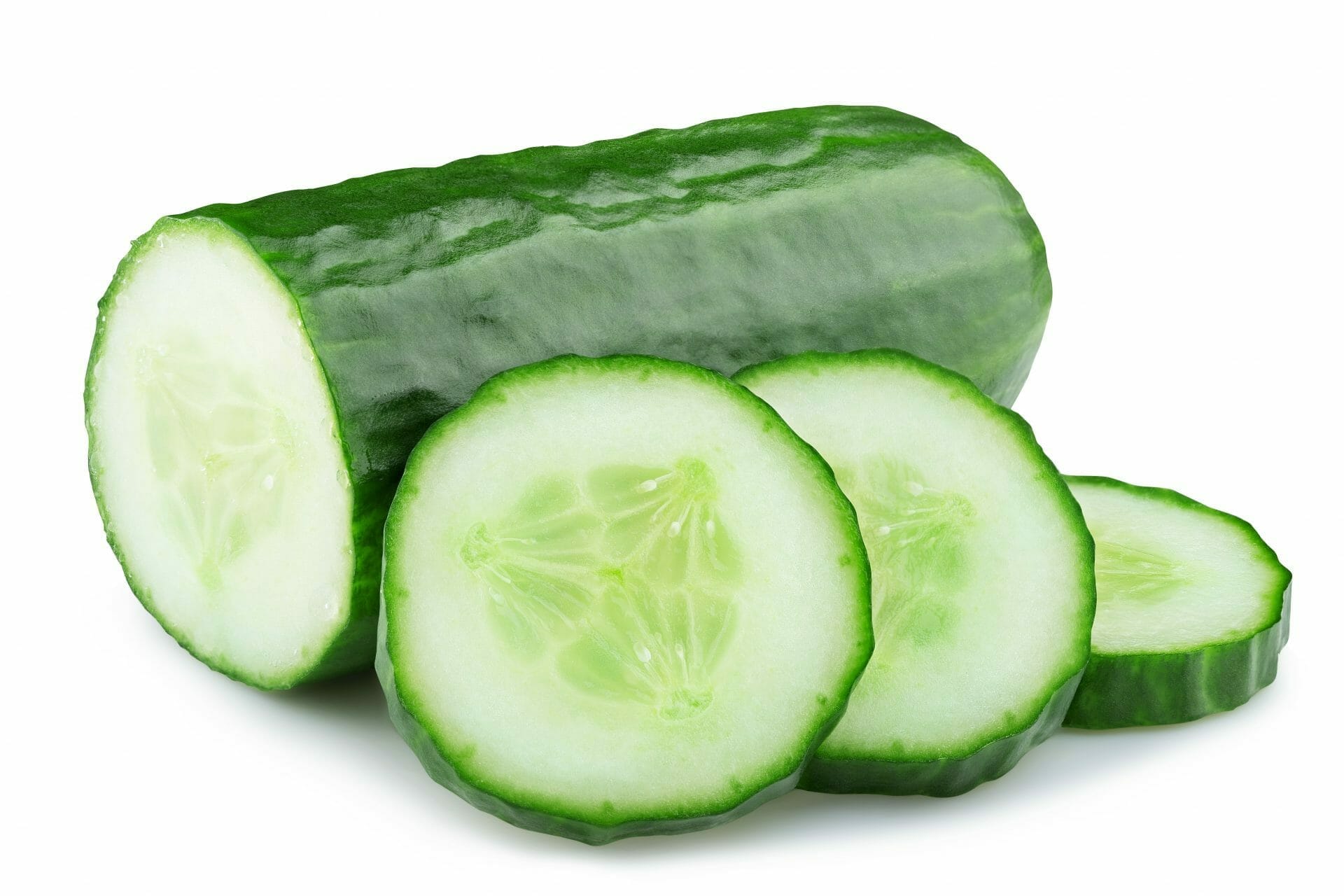 Cucumbers! A succulent fruit that’s packed full of nutrients and water to both nourish and hydrate the body.

It’s perfect by itself with a dipping of ranch dressing, with a tasty salad, or to reduce the puffiness around one’s eyes.

Crazy, right, that a single fruit can have so much usefulness all in one sitting depending on your wants and needs?

But just imagine one day grabbing the bag of cucumbers you’ve purchased only to discover a weird, white film that’s decorated the surface of the cukes skins.

Generally speaking, eating cucumbers with white film or ones that possess a slimy surface is not safe to eat. It does not matter if the slime is on the inside, outside, on slices, or as a whole. Any changes in color, odor, texture, and taste are definite factors in determining whether the fruit has spoiled.

Is It Alright to Eat Slimy Cucumbers?

Cucumbers live a very short life, and, if you wait a week until you eat it, you’re going to need to check if it’s gone bad because you can get sick from eating bad cucumbers.

So, because of this, it’s not a good idea to eat cucumbers that are spoiling or have aged.

Fruit or vegetables that have spoiled will often change in color, odor, and texture. These are the clearest indicators to note whether something has gone bad. With the most obvious being smell, then sight, and, finally, texture.

And, as always, it does not matter whether the slime is on the cucumber, sliced, or whether it’s in the inside or outside.

Slime is a different texture than how the cucumber typically is – which, yes, the cucumber does hold a lot of water – which is why it’s important to know the difference between a fresh cucumber and a spoiled one.

Even if the cucumber is firm, it is generally not safe to eat a cucumber that feels slimy against the skin.

This is because the slime is a clear indicator of the cucumber going bad due to not being stored properly.

And, despite them being firmer than other fruits or vegetables, they still need to be stored properly and away from pesky airborne particles.

The slime occurs when the texture of the inside of the cucumber has started to change and, as a result, the liquid that is inside the cucumber starts leaking out becoming a white film.

Cucumbers are majorly made of water so the existence of this white film when they start to spoil makes sense and is a good indicator without having to cut the cucumber open to find out whether it’s gone bad.

What Happens When You Eat Slimy Cucumbers?

These include symptoms such as vomiting, diarrhea, nausea, and dizziness. Gastric health issues that could come up alongside these are constipation, irritable bowel syndrome, nausea, food poisoning, gas, bloating, GERD, and diarrhea.

While the symptoms depend on the type of contaminant eaten, common food poisoning symptoms are nausea, vomiting, watery or bloody diarrhea, abdominal pain and cramps, and fever.

Surprisingly enough, experts at Mayo Clinic state that these symptoms can start within several hours of eating the food or can even start days and weeks after eating it.

Gastric distress would be the overall issue that deals with the negative impacts on gut health such as constipation, irritable bowel syndrome, nausea, food poisoning, gas, bloating, GERD, and diarrhea are common examples.

There are plenty more symptoms that can happen because of gastric distress that can occur not just because of food poisoning but because of other factors that play into it as well.

What Is the Shelf Life of Cucumbers?

Cucumbers last about one week in the refrigerator. However, the length of time can increase or decrease depending on the way that they are stored.

For example, cucumbers that are just bought from the store and are stored in an airtight container with a paper towel will last the maximum amount of time.

On the other hand, cucumbers that are cut up or have been mixed in with other types such as salad will have a shorter timespan than other methods of storage.

These generally last about one to two days when stored in the fridge compared to one week like whole cucumbers.

A keynote to make upon further research is understanding that waxed versus unwaxed cucumbers have different shelf lives.

For example, if you are to select an already wrapped cucumber, then odds are the cucumber is more likely to last about a week than an unwaxed cucumber.

Especially since the unwaxed cucumber has been exposed to the room temperature environment for longer periods of time than the other options.

Above showcases the expiration dates for the three most common forms of cucumbers, not including others that can be found all over the globe.

*Unknown simply refers to the unstated amount of time that cucumber can last in the freezer.

Through speculation, cucumbers, no matter how they are stored if it’s in an airtight container, will last approximately the same length of time as fresh cucumbers stored in the freezer.

Your average cucumbers at the local grocery store are often stored in an airtight wrap that protects them from annoying airborne particles. However, not all cucumbers are stored this way.

For example, at Fred Meyers, they have their cucumbers both in the airtight wrap as well as loosely placed in the produce section.

This allows them to be cleaned by the sprinklers. Upon arriving home, it’s important to not leave them exposed and, instead, store them in airtight containers either in the refrigerator or the freezer.

The overall location should be in the fridge or freezer away from other fruits or vegetables such as avocados, bananas, tomatoes, or melons they are more likely to yellow quickly due to the exposure to ethylene gas.

Make sure to store the cucumbers, whether in the refrigerator or freezer, in an airtight container to avoid being exposed to annoying airborne particles.

Cucumbers that are stored in refrigerators should be wrapped in a paper towel and stored in an airtight container such as glass or, sometimes, plastic.

Plastic in the fridge is an okay usage of storage space.

However, it is often better to store them in glass containers to avoid compromising the integrity of the fruit, itself.

Freezers help the cucumbers last longer by introducing them to temperatures below 41 degrees.

This helps keep cucumbers, or cukes, out of the danger zone which is more apt to cause a product to gain bacteria.

Any cut of cucumber, whether it is freshly bought from the store or untouched – to cut slices – can be stored in the freezer to increase the amount of time their freshness lasts.

How To Tell If a Cucumber Has Gone Bad?

Always be sure to check for any change in color, odor, or texture because these will always be clear signs that the cucumber has aged.

A good note to make when it comes to any fruit or vegetable is that when there is a significant change in these three components, toss it out.

There is not a printed expiration date on the cucumber, so it’s best to check through the following: color, odor, texture, and taste.

The overall skin may not change significantly, but there will be areas that have grayish spots that mean there is mold coming out of these specific areas.

Other signs relating to color include spots that are more yellow than green, as well as those splotches of mold. Of course, there are other signs that the cucumber has spoiled.

But because cucumbers are made the way they are, the clearest distinctions are going to be color and texture.

Cucumbers will have a smell that’s akin to rotten milk because of the moldy spots penetrating from the inside to the skin’s surface of the cucumber, itself.

However, this is the only indication through smell that the cucumber has gone bad or spoiled, as the cucumber is made up of mostly water.

Think of the smell when you remove sunflowers from a vase of water and how the water smells nasty and is murky – this would be the exact smell the cucumber would have.

Cucumbers that are going bad will become wrinkled and, with time, mushy.

There will also be wrinkled or soft spots on the surface of the cucumber or cuke, for short.

Usually, when enough time has passed, the cucumber will inevitably appear soggy and mushy if it’s stored in those produce bags from the produce section at the grocery store.

Therefore, it’s important to keep in mind the length of time that cucumbers last, approximately, as well as store them in a way that doesn’t expose them to the “danger zone” that impacts the freshness of fruits, vegetables, and other products that are sensitive to bacteria and viruses.

The taste of cucumbers that have spoiled is rancid and bitter. The moment you bite into a cucumber that has this taste, just throw it out. Because, odds are, that the cucumber has spoiled and aged.

Therefore, it’s important to make sure that you double-check the above before biting into a slice of cucumber to avoid biting into something that could be moldy or aging.

However, it’s sometimes difficult to do this as the cucumber might already be sliced and diced before serving.

Storing cucumbers in airtight containers that are protected from room temperature environments helps to prevent them from going bad quickly.

As well as storing them away from certain kinds of fruits and vegetables to prevent them from yellowing faster.

Food poisoning and gastric distress are never fun to deal with when it comes to eating rotten cucumbers, or any other foods, for that matter.

So, by always following proper guidelines in terms of prepping and handling the food will help to save you a one-way trip to the hospital!