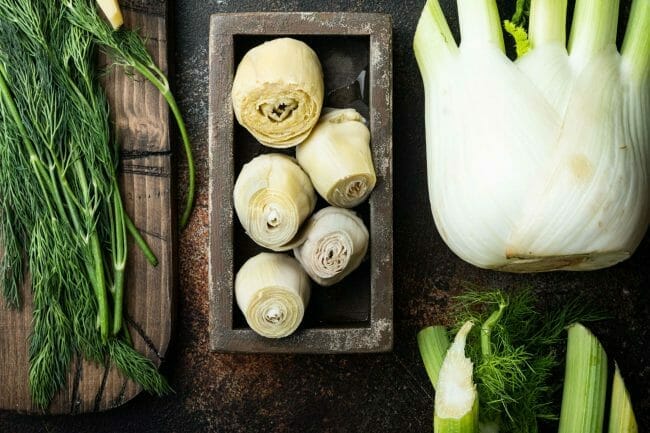 Artichoke hearts. They’re toothsome, flavorful, sweet, and delicious. But they can be a bit pricey at times and hard to find during the holiday season!

Or maybe you just don’t want to go through the hassle of trimming a batch of artichokes just for the little heart.

Artichoke hearts are not always every person’s cup of tea, and some people even have allergies or dietary restrictions that make artichoke hearts off the table.

We’ve got you covered here with a list of easy alternatives for any of your cooking needs. These swaps are all vegan and gluten-free, making them easy to fit into any dietary needs!

While kohlrabi, broccoli stems, or frozen artichoke hearts would work better in a soup. If your recipe calls for stir-frying or baking, asparagus, brussels sprouts, or Cardone are all great substitutes that won’t break the bank.

In this article, we’ll be going over the best ways to use these vegan and gluten-free substitutes for artichoke hearts and answering some common questions you may have about artichoke hearts!

Bamboo shoots are a fantastic alternative to marinated artichoke hearts. They have a similar texture to artichoke hearts and are easy to find the canned variety in any grocery store, especially in the Asian aisle.

Bamboo shoots are the inside part of the bamboo plant.

The canned variety is stored in a brine similar to the one used for marinated artichoke hearts, making it a great alternative in terms of flavor and texture.

If they are not marinated, you can always make your own quick marinade with oil, vinegar, and Italian seasoning to flavor your bamboo shoots.

The canned variety of artichoke leaves is perfect in spinach dip because it is pre-peeled and brined which adds a wonderful tangy flavor to the dip.

Heart of palm, also known as palm cabbage or palmetto, is another excellent substitute for artichoke hearts. Heart of palm is easy to find canned in the Asian aisle of the grocery store.

The canned heart of palm will appear like long sticks. If you are looking to use it as a substitute for marinated artichoke hearts, you will need to marinate the heart of palm in vinegar, oil, and some Italian seasoning to give it a similar flavor.

Chayote is a squash with a very light and crisp flavor, almost like a cucumber. It doesn’t have the same earthy flavor you will find in an artichoke heart, but its crisp texture makes it an excellent substitute for artichoke hearts.

Chayote are a squash native to Mexico, have a lime green color, and somewhat resemble a summer squash.

They work perfectly sliced or diced and added to a salad in place of artichoke hearts.

Funnily enough, Jerusalem artichoke is not actually an artichoke at all! It is technically a sunflower, which is why it is also called a sunchoke.

They are nuttier and sweeter than regular artichokes, but they have a very similar texture to artichoke hearts, which makes them a perfect substitute for a salad.

Kohlrabi, or German turnip, makes an excellent substitute for artichoke hearts, especially when it is cooked. Once cooked, the kohlrabi takes on a similar flavor and texture to artichoke hearts.

It has a slightly savory flavor and will also taste a bit fresher than artichoke hearts, which can be a welcome addition to hearty stews.

Kohlrabi is also low calorie and high in vitamin C, and naturally gluten-free and vegan.

It is a healthful alternative to artichoke hearts that will enhance any soup or stew you are whipping up in the cold months.

Broccoli stems are a great substitute for artichoke hearts. High in fiber, vitamin C, and vitamin E, broccoli stalks are the perfect veggie to add to your soups or stews.

They have the same bulking qualities as artichoke hearts, though the flavor is a bit different.

Broccoli stems have a vegetal and slightly bitter taste. Their flavor differences make them not the perfect substitute, but they are highly versatile and can be added to almost any recipe.

When vegetables are reheated from frozen, there is always a risk that the cell walls will burst, which can make the vegetable limp and lifeless.

This is much less of an issue in a soup, where all of the vegetables will be soft and meld together.

Asparagus is such an easy swap for artichoke hearts. It is found in every grocery store and available all year round.

Asparagus is fibrous and woody and has a much more vegetal flavor than artichoke hearts.

It is a great source of potassium and a naturally gluten-free and vegan substitute. It pairs well with many types of dishes and has a crisp texture when cooked which is a great substitute for artichoke hearts.

When using asparagus as an alternative for artichoke hearts, cut it up into slices about an inch long before sautéing or stir-frying for best results.

Be careful when cooking asparagus. It cooks up much faster than artichoke hearts or any of the other substitutes on this list. If you choose to use this swap just be sure to keep an eye on it as it is cooking.

Brussel sprouts are another nutrient powerhouse! Chock full of Vitamin C and Iron, brussels sprouts are a healthy alternative that can be found in any supermarket in the country.

Brussels sprouts can be cut in half before baking or sautéing to add a nice umami flavor to your dish.

Bear in mind that the texture will be fairly different than artichoke hearts. However, the flavor match from brussels sprouts is much closer than some of the other items on the list.

Cardone, also known as cardoon or artichoke thistle, is an ideal substitute for artichoke hearts.

It is high in potassium, magnesium, and fiber, and is naturally gluten-free and vegan. The Cardone looks a bit like celery stalks but tastes very similar to artichoke hearts.

Cardone might not be as easy to find as some of the other items on this list, but it can make for an excellent substitute for artichoke hearts if you are able to get your hands on it.

Cardone must be cooked before being eaten. Once cooked, the texture changes and it is much softer than artichoke hearts.

However, the flavor is similar enough that it will work beautifully as a substitute in any dish where the most important thing is the artichoke heart flavor.

Are Artichoke Hearts And Bottoms The Same Thing?

Artichoke hearts and artichoke bottoms are from the same plant but slightly different parts of the plant.

Artichoke bottoms have a fleshy texture and are very flavorful, much like the artichoke heart. In a pinch, you can substitute one for the other.

Many recipes that call for artichoke bottoms are very similar to recipes calling for artichoke hearts, such as appetizers, dips, and salads.

How Can I Flavor Artichoke Hearts?

You can marinate them yourself at home by adding vinegar, oil, and spices to artichoke hearts and letting them sit in the marination for several hours or up to a few days.

Or you can purchase jarred artichoke hearts which are typically packed in flavorful liquids which will pack a punch of flavor to your artichokes.

Cooked artichoke is also delicious dipped in butter or steamed and seasoned simply with salt and pepper.

How Do I Get The Artichoke Heart Out?

The leaves will remove easily once you have cooked them. When you get to the fuzzy choke, scoop it out. What is left is the heart.

Alternatively, you can use the following method. Remove the thorny stems with scissors from each leaf -or if you are not using the leaf at all, cut away each leaf.

Peel the outer layer of the stem with a vegetable peeler and remove the tough outer leaves until you get to the tender inner leaves. Slice off the top crown of leaves from the stem.

Inside you will see the fuzzy choke. Remove this with a lemon baller. Clip off any remaining fuzzy parts of tough bits. Now it is ready to cook!

Are Artichoke Hearts And Jerusalem Artichoke The Same Thing?

Artichokes are green and round and have many leaves with a prickly end that come up around a central stem.

Artichoke hearts are such a flavorful and tasty treat, even if they can be a bit cumbersome to harvest.

Whether you are whipping up a light salad or flavorful dip, we hope you found some inspiration here for some easy substitutes for artichoke hearts.