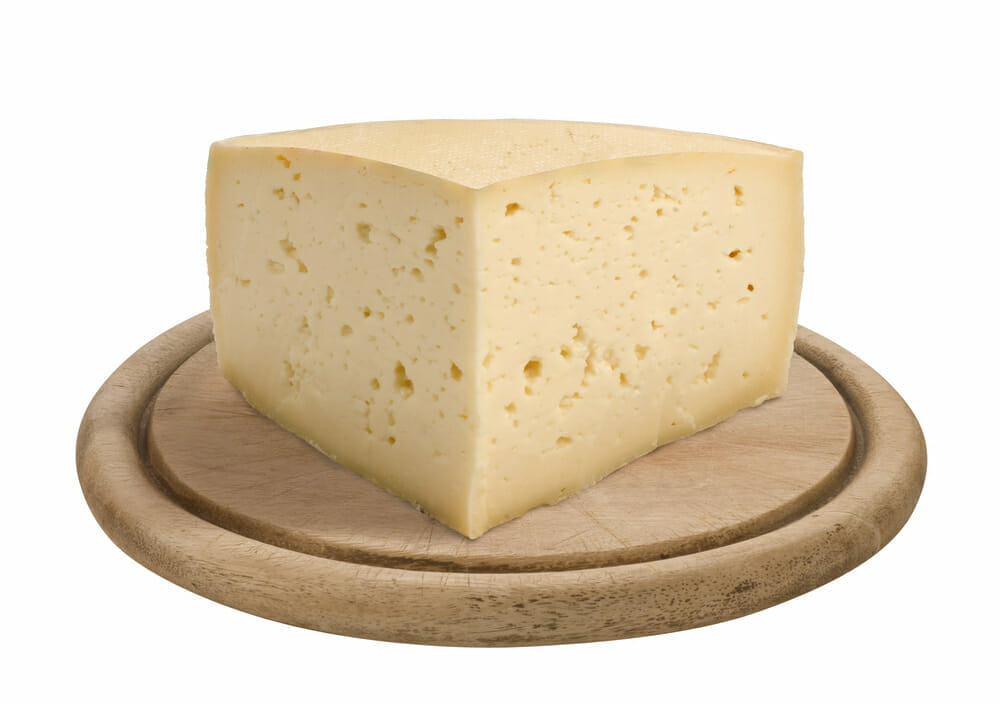 While we love asiago cheese, I have been trying to eat healthier lately and went looking for asiago cheese substitutes.

I wanted to find some low fat substitutes, vegan substitutes and just other cheese that would switch up my routine.

I cook a lot of Italian foods which means I almost always have parmesan cheese on hand. Parmesan is very easy to find in any grocery store so you should have no problem picking up this perfect asiago substitute.

My kids love this substitute because it is a cheese they are already familiar with. We do use a lot of parmesan in my house!

Grana Padano is a little harder than asiago cheese. It is best when grated or melted. Use this asiago substitute to sprinkle over pasta or to melt into a cheese sauce.

You can use the same quantity of grana padano to replace asiago cheese. Since the flavors are similar, there is no need to adjust the recipe.

I recommend getting genuine grana padano cheese from Frank and Sal. It is imported from Italy and has an incredible flavor.

Gruyere cheese and asiago both have similar grainy textures. However, gruyere is a little bit softer than asiago cheese and has a much nuttier, rich taste.

When replacing asiago with gruyere, you may want to use about ¾ of the amount of gruyere. Since it is a bolder tasting cheese, you can use less and still have a great flavor.

Gruyere is best as a grated cheese but it also melts well. I love serving sliced gruyere on cheese plates and charcuterie boards. My guests always go for the gruyere slices first!

Manchego is actually a Spanish cheese so it has a different origin than asiago. It is also a sheep’s milk cheese. However, it is still a fantastic substitute, no matter where it came from!

Manchego is usually a hard cheese but you may find softer versions that are not as aged. Both types of manchego will work great to replace asiago cheese.

Fresh, soft manchego makes a great asiago cheese substitute for cheese platters and melted cheese sauces. I have a hard time finding fresh manchego but when I do, I always buy extra- it is so good!

Aged, hard manchego is perfect for grating over pastas and salads. Replace asiago cheese with the same quantity of creamy manchego cheese and your recipes will be delicious!

Pecorino romano cheese can be made with goat’s milk, sheep’s milk, cow’s milk or a combination of milks. Check out our post on Goat Cheese Brands.

The hard Italian cheese has a very sharp, tangy taste that many people adore. In fact, romano cheese is becoming more popular than the classic parmesan cheese!

Use pecorino tomato to replace asiago in any recipe. It works well as a grated cheese, a sliced cheese or a melted cheese. I like to pre grate a bunch of pecorino cheese so I can quickly sprinkle it over my pasta. It adds so much flavor!

Comte cheese has a similar texture to asiago. Both cheeses are hard, a little grainy and aged for years.

Comte is a French cheese that is made with unpasteurized cow’s milk. It has a nutty and buttery taste that is similar to asiago.

It is a little bit sweeter than asiago so you want to keep that in mind when using it as a substitute.

Comte is great for melting and has a beautiful, thick texture when melted. I like to use comte to replace asiago in cheese in alfredo sauce recipes. You can replace asiago with comte using a 1:1 ratio.

Grab a pound of French comte cheese and you can start cooking today!

Nutritional yeast is almost like crumbled, dry parmesan cheese. It does not melt so it is best to use as a grated asiago substitute.

Sprinkle some nutritional yeast on your pasta or salad to get a great cheesy taste in a vegan way. I am not personally a vegan but I still love the taste and texture of nutritional yeast. It gives my foods an interesting, healthy twist.

Grab a bag of Bragg nutritional yeast online and have it delivered right to your door. I love the flavor of this brand. It will also keep in your fridge for up to a year!

Add 1 cup of cashews, 3 Tbsp nutritional yeast, ½ tsp sea salt and ¼ tsp garlic powder to a food processor. Pulse everything together until the cashews are fine and powdery.

You probably know that cashews will not melt so this vegan cheese mix is best as a grated “cheese” or a sprinkle. I love using it on pasta dishes and my kids don’t even realize that it isn’t real cheese!

I always buy cashews in bulk because we eat them as a snack and now also as a cheese! Happy Belly cashews are always super fresh and have the perfect amount of salt.

Provolone is a great asiago substitute thanks to its strong taste. Both asiago and provolone are slightly tangy and rich. The similar flavor profile is perfect for using these two cheeses interchangeably.

The texture of provolone is slightly softer than asiago but it melts well, grates perfectly and slices beautifully.

Use the same quantity of provolone to replace asiago in any recipe. Everyone loves provolone slices on a cheese board and provolone grated over pasta is quite delicious.

Sap Sago is an interesting, herby cheese. It is made in Switzerland and is surprisingly low in fat.

Two teaspoons of grated Sap Sago has only 20 calories and 0 grams of fat. Asiago, on the other hand, has about 111 calories per ounce and 7 grams of fat. Sap Sago is clearly a great, healthy asiago substitute.

Sap sago is a very hard cheese so it is not great to slice. However, it is perfect for grating.

Try sprinkling a little Sap Sago over your pasta and you will get a tangy, herby taste! I love the unique taste and have used this asiago substitute many, many times. Look for the cone shaped cheese in your grocery store and grab at least two!

Did you know you can use seasoned breadcrumbs instead of grated asiago cheese? I absolutely love this asiago substitute because it is an out of the box idea!

You will get a great, Italian flavor especially if you use 4C brand of breadcrumbs. They are my favorite by far!

Breadcrumbs are also such an easy asiago cheese substitute. They keep in the pantry for months and all you need to do is scoop and sprinkle!

Breadcrumbs are a wonderful vegan substitute for asiago cheese as well. I love the bit of crunch they add to my pasta and salads. Who knew breadcrumbs could work in place of cheese!?

I was surprised to find out that monterey jack is a really good substitute for asiago cheese.

Monterey Jack is a softer cheese than asiago but it has a similar tangy taste. Monterey jack cheese is a little spicier than asiago so I like to use a little less. I replace 1 cup of grated asiago cheese with ¾ cup grated monterey jack.

Monterey jack cheese is also a fantastic sliced cheese. It is good on crackers and sandwiches.

I especially love monterey jack cheese as an asiago cheese substitute because it is very easy to find. Almost every grocery store carries Monterey Jack!

What is Asiago Cheese?

Asiago cheese is a hard, Italian cheese made from cow’s milk. Asiago cheese has to be made in the Asiago Plateau in Italy.

The cheese actually has a special certification and only cheese from this area can be labeled as true Asiago. Pretty cool!

Asiago cheese has been around since the 10th century. It started off as a sheep’s milk cheese and switched to cow’s milk as the popularity of cattle farming grew.

However, the cheese didn’t gain special certification until 1979 when it quickly became super popular through the new, special branding.

Asiago cheese is a hard cheese that grows in flavor as it ages. It has a nutty, buttery flavor that is fairly mild. It is also quite salty, a little bit sweet and has a texture reminiscent of parmesan cheese.

Wondering what to make with Asiago cheese? It is actually very versatile!

Asiago melts beautifully so it is great as a cheese on top of pizza, in a pasta dish or as a cheesy dipping sauce.

It is also a perfect cheese to grate and can be added as a finishing touch to salads, sandwiches and even into soups.

The flavor does grow stronger if the cheese is aged longer than 9 months. If you want a more powerful asiago, make sure to get an aged version!

I mentioned before that I was looking for a cheese that may be a little healthier than asiago. But what exactly is the nutritional content of asiago cheese?

Here is a quick look at the nutritional facts for one ounce of asiago cheese.

Asiago cheese sure is delicious but all of these substitutes are great, too. There are so many cheeses you can use to replace asiago and each one is unique and tasty in its own way. Let me know which ones are your favorite!