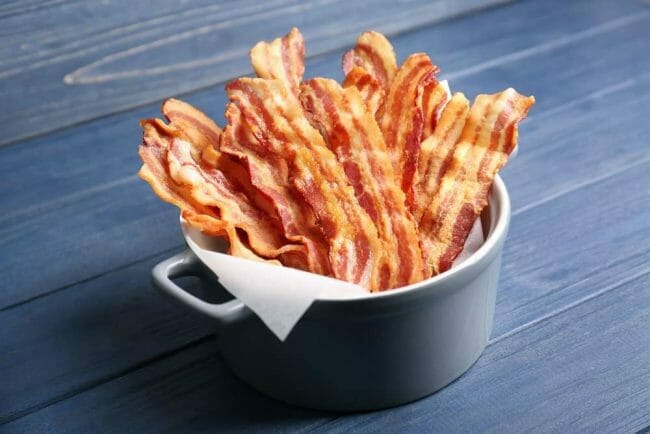 Everybody loves a nice rasher of bacon. Streaky with fat, salty, and smoky, bacon and its drippings add incredible flavor to a wide variety of dishes.

It is a traditional form of fat that was typically collected while cooking and used to elevate the flavor of many savory dishes. Yet bacon drippings can be laborious to collect.

As a pork product, bacon drippings (or bacon grease/fat) are also forbidden in several religious traditions, necessitating an alternative.

Whether you avoid bacon drippings for religious or health reasons or simply don’t have any on hand, the following substitutes will allow you to continue your cooking without missing a beat. If you are looking to whip up some jambalaya, there are many other animal-based fats you can use such as schmaltz, beef fat, or lard. Baking tends to require a lighter flavor, making butter or canola oil a great option. Vegetarians and vegans may prefer plant-based options of olive oil, peanut oil, or sesame oil.

In this article, we’ll go over these substitutes and the best ways to use them and answer a few commonly asked questions about bacon drippings.

Schmaltz is the traditional Jewish alternative to bacon grease because it is within kosher guidelines.

Schmaltz is the rendered fat from chicken skins. Robust and flavorful, schmaltz can be used to crisp up vegetables, sauté aromatics, and cook meats.

Schmaltz does not have the same smoky flavor that bacon drippings do, but it still adds a wonderful meaty flavor to dishes, albeit a bit more delicate.

Schmaltz can be found in some specialty stores or made at home. To make schmaltz, take all the skin and fat from the chicken, place it in a sauté pan, and cook on low heat until all the fat has melted, and the skins are crisped up.

The crisped-up skin can be eaten like pork rinds, with a little salt. The schmaltz can be stored in a jar in the refrigerator and used within two months.

Beef tallow is the rendered fat from beef. Much like schmaltz, it is made by melting the fat from the beef and then letting it cool and harden.

Beef tallow has a stronger flavor than schmaltz but still lacks the smokiness from bacon drippings.

Cooking up your veggies in beef tallow will impart a wonderful meaty flavor to your dishes.

Like schmaltz, beef tallow is both kosher and halal, making them excellent choices for those with religious dietary restrictions.

It can be difficult to find in some stores because it is not as commonly used today as it used to be used, however, some specialty stores may carry beef tallow.

The final meat-based fat is lard. Lard is the rendered fat from pork. It is the easiest animal-based fat to find on this list and is probably the closest in flavor to bacon drippings.

Lard is a very popular fat to use in Mexican cuisine and is a key ingredient for the dough in tamales.

It has a strong flavor, making it excellent to use in savory dishes such as gumbo and other creole dishes.

There are also plant-based “lards” as well, such as Crisco. Plant-based lard is even more versatile because it has a neutral flavor, meaning it can also be used for baking or sweet recipes.

Butter is a great alternative to use in baking recipes. Slightly sweet and beautifully creamy, butter can be used melted or hard, much like bacon grease.

When cold, it can be used to make delicate and flaky crusts, and when melted it brings cookies together beautifully.

Butter can be used at a 1:1 ratio in replacement of bacon drippings. Be sure to adjust your salt levels (you will need more salt with butter than with bacon grease).

It is a great neutral oil that can be used in all sorts of recipes. Canola oil is low in saturated fat and has a high smoke point, making It great for frying and sauteeing. It also makes an easy swap to use in savory or sweet baking recipes.

Canola oil is excellent in cakes and brownies because of its neutral flavor but can also be used to make a beautiful pie crust.

Oil crusts will not be as flaky as butter crusts but will still be delicious and tender.

To use canola oil in place of bacon drippings, use at a 1:1 ratio and taste for salt adjustments.

Vegan aficionados are always on the lookout for the next best meat-alternative products out there.

Food like Impossible Burger or Beyond meat has changed the game for plant-based meat alternatives.

New products like Magic Vegan Bacon Grease are great options to add to the arsenal for those seeking a flavor extremely close to real bacon grease yet entirely plant-based.

Vegan bacon grease can be used in the exact same way as real bacon grease, making it an easy swap in any recipe you are using that calls for it.

Olive oil is a perennial favorite for many vegetarian and vegan cooks looking for plant-based fat.

Originating in Italy, olive oil is the basis of a wide variety of Mediterranean dishes. Olive oil has many excellent health benefits, including lowering cholesterol and improving heart health.

The robust olive flavor is at times both smooth and sharp, lends a luxurious mouthfeel to any dish, and absorbs other flavorings like acids beautifully.

It works as a delicious oil base for sauteing vegetables or creating rich stews. It also works beautifully as a dressing or finishing oil, giving a smooth sheen and rich mouthfeel to your food.

Peanut oil is a fantastic versatile plant-based oil with many health benefits. It is naturally free of trans fat, cholesterol, and low in saturated fat.

It is also very high in vitamin E, making it a popular addition to skincare products.

Beyond is myriad health benefits, peanut oil is also highly aromatic, making it a great oil base for all kinds of recipes.

Peanut oil will add a delicate nutty flavor to any of your dishes when used uncooked.

It is also an excellent oil for frying with because it has a very high smoke point. It can easily be used as a replacement for bacon drippings in a 1:1 ratio.

Like many of the other oils on the list, you will need to add more salt to make up for the salt in the bacon drippings.

One of the earliest known plant-based oils, sesame oil is another oil chock full of antioxidants and good fats.

It is very popular in Asian cuisine and adds a beautiful nutty flavor to any dish you cook with it.

While sesame oil can be used for cooking and sautéing, it is most popular used raw as a finishing oil because of the delicate flavor it imparts.

Sesame oil is a wonderful oil to use as a dressing or marinade. Its flavor is very distinctively different than bacon drippings, so be judicious about which recipes you choose to use it for when replacing bacon drippings.

However, it can easily be used in a 1:1 ratio in most marinades or dressings. Be aware though that Sesame oil is very expensive and is not commonly used to fry or sauté in the U.S.

Can You Buy Bacon Drippings?

Bacon drippings can be hard to find in some grocery stores. Traditionally you would only be able to procure them by making a rasher of bacon and saving the grease.

However, nowadays some manufacturers sell jars of bacon grease that you can buy in the grocery store. It can be used in the same you would use homemade bacon drippings.

Can you Make Bacon Drippings?

You can! Bacon drippings are very easy to make. Cook the bacon at a medium temperature to render out all of the fat from the bacon.

Remove the bacon, then leave the grease in the pan to cool. When it is cool it will be solid, and you can easily scoop it into a jar to keep.

Are There Other Uses For Bacon Drippings Besides Cooking?

There are many other potential uses for bacon drippings. You can use it to season your cast iron pan, make candles, or even make bacon-flavored lip balm.

It can be used to grease a cake pan, make bird food, and even make fire starters with them.

Bacon drippings can go bad if left out at room temperature. The best way to store bacon drippings is in the refrigerator, where it will stay fresh for up to 6 months.

To use the bacon drippings, simply scoop out the amount that you will need to use and heat it up.

Bacon drippings are a flavorful and versatile fat that can be used to cook up a variety of flavorful dishes both savory and sweet.

Because it is derived from pork, bacon drippings are not allowed for some religiously observant people, making substitution options especially important.

Hopefully, this article gave you some ideas about the easy swaps out there that will make your recipes delicious and nutritious!