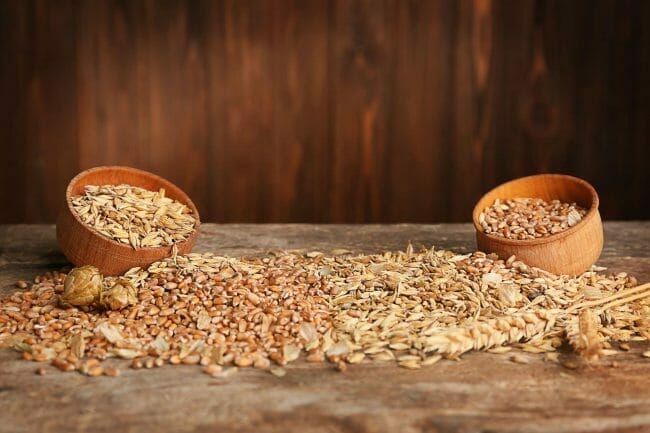 In fact, it’s one of the main ingredients when making bagels, sauces, pretzels, and many other bakery products.

The dark, thick, and sticky substance also comes in powder form and is less sweet than other syrups on the market.

Barley malt syrup is becoming more common, but when it’s not available there are some great substitutes in supermarkets and sometimes right in the home.

Generally speaking, agave and coconut syrup are ideal substitutes for barley malt syrup. Honey, molasses, and maple syrup are the best overall substitutes in baked goods. In cooking, this syrup has two popular substitutes, such as brown rice syrup and Korean rice syrup.

Choosing the best substitute for barley malt syrup will depend on the dish and the expected result. In the article below we’ll discuss how to choose the substitute and what those substitutes are in more depth.

A natural sweetener acquired from different species of agave is common in vegan cuisine. This table sweetener has started to gain popularity in recent years and can be found in most supermarkets and smaller stores.

Even though it’s normally used as a table sweetener much like sugar, it can substitute barley malt syrup in baked goods.

Agave syrup is an ideal substitute for barley malt syrup because of its color and sweetness level.

Though it is a little thinner in comparison to barley malt syrup, it has a similar consistency to honey and still works in baked goods.

The similarities between agave and barley malt syrup mean the same amount is used (ratio 1/1) when cooking as the recipe requires; the same is true for a table sweetener.

Extracted from sugar coconut saps, the process is complex and laborious. A caramel-colored sweetener, coconut syrup has a taste reminiscent of brown sugar.

This is not a common substitute or ingredient; likely if there is no barley malt syrup on hand, it’ll be more difficult to find coconut syrup.

But if by any chance it is available, it works great as a table sweetener as well as in various baked goods.

Coconut syrup provides a sweet and nutty flavor to anything it gets added to, which is why it’s good in ice cream, cakes, and pancakes.

Coconut syrup has the same sweetness level as barley malt syrup which means it’s a one-to-one ratio with no need for adjusting the recipe.

Rather obvious and common, but sugar is a good substitute for barley malt syrup. Great for baking, cooking, and as a table sweetener, it’s an ingredient that’s likely found in most kitchens.

Sugar is nothing fancy when it comes to available sweeteners, but it gets the job done in a pinch.

However, if sugar is all that’s available, it’s important to remember it is much sweeter than barely malt syrup and only about half of what the recipe asks should be used. Cut the recipe amount by half and if needed work your way up from there.

Considered one of the best substitutes for barley malt syrup, honey is one of the oldest sweeteners in the world. Available almost anywhere, not only is it cheaper to come by sometimes, it could also prove cheaper.

One of the many benefits of honey as a substitute is that it also has a very similar consistency. It’s especially popular with individuals who are looking for a gluten-free alternative.

Honey is useful to substitute for various reasons throughout the kitchen. From baked goods such as cookies, it works well as a sweetener in tea and water to give it some flavor.

Honey is twice as sweet as barley malt syrup, so if using it as a substitute, it’s important to remember to cut the recipe amount down to half.

For instance, if the recipe calls for 2 tablespoons of barley malt sugar, you’d use only 1 tablespoon of honey. The best way not to overdo it is to taste as you add if possible.

Thick syrup made from sugar, water, and citric acid like lemon juice, it’s a popular ingredient in traditional British desserts.

The simplicity of the ingredients also makes it easy to make at home with items lying around the kitchen if barley malt syrup isn’t available.

Golden syrup is sweeter than barley malt syrup and should be used sparingly.

Since this is something that can be made right at home, the sweetness level will depend on the maker.

If used as a substitute for barley malt sugar, tasting the dish as you add it is vital to make sure the dish isn’t too sweet. Start with half of what the recipe asks in barley malt syrup and work your way up from there.

A by-product of sugar production, this thick sweetener has a lot in common with barley malt syrup.

Molasses and barley malt sugar are compared to one another since they have a similar color, sweetness, and viscosity, even though the two are not the same.

Great substitute for bagels and other baked goods, molasses is sweeter than barley malt sugar and should be used with great care.

Start with half of what the recipe calls for and work your way up from there; instead of a required 2 tablespoons, for example, use only 1 and see if more is needed.

When substituting barley malt syrup with molasses fewer molasses goes a long way and tasting the dish as it’s cooked is the key.

This easy-to-make cookie recipe is a surefire way to test how well molasses work in desserts instead of barley malt syrup.

Most everyone is familiar with maple syrup, especially when they’re pouring it on their pancakes. This thick syrup is extracted by boiling sugar maple saps until they form into delicious syrup.

Apart from honey, it’s one of the best barley malt syrup substitutes for many different recipes, however, it tends to work best in desserts.

With a deep nutty flavor, this sweet thick syrup has a similar taste to that of barley malt syrup.

Though it’s a slightly thinner consistency, it’s a one-to-one substitution in various recipes.

There’s no need to make any conversions to accommodate a higher or lower amount, simply use what’s in the recipe.

A common ingredient in many foods, maltose is likely to be found in bread and beer. Less sweet than sugar, maltose contains only glucose making it a more popular choice for those looking to avoid fructose.

As a matter of fact, many manufacturers switched from corn syrup to maltose because of the lack of fructose.

A good substitute for barley malt syrup in baked goods such as bread and bagels, the amount has to get adjusted.

Though it’s less sweet than sugar, it is still sweeter than barley malt syrup and less has to get used in recipes.

Rather than slashing the amount by half of what the recipe calls for, use a little more to get the sweetness without going overboard.

This sweet syrup is extracted from dates of palm trees using a rather complex process. Though this syrup option is as old as honey, it’s only recently that it’s become more popular and widely available.

Not something many people have found in the past, it is now on the shelves of more supermarkets.

Date syrup is a little less sweet than barley malt syrup. When substituting barley malt sugar with it, a little more date syrup has to be used in the recipe for the right amount of sweetness.

For recipes that call for 2 tablespoons of barley malt syrup, start with at least 3 and add more as needed.

Extracted from breaking down brown rice through fermentation, brown rice syrup is a great alternative to barley malt syrup, much like molasses and honey.

A vegan and healthier option, it adds sweetness to any dish without adding any extra calories.

Brown rice syrup is less sweet than barley malt syrup. Substituting correctly in any recipe means using a little more than what’s written into the recipe.

Sweetness is a personal preference, but it’s usually good to add a teaspoon or two more to any recipe.

As the name suggests, it’s a staple in Korean dishes as a glaze and for adding an extra level of sweetness.

A traditional recipe that uses barley creates this thick Korean rice syrup which makes it the closest alternative out of all the sweetener options. Flavorful and sweet, Korean rice syrup has an earthy and nutty flavor.

Substituting barley malt syrup with this Korean rice syrup alternative is easy since they have roughly the same level of sweetness.

In a perfect one-to-one ratio, use the exact same amount the recipe calls for concerning barley malt syrup.

Is Barley Malt Syrup Bad For You?

As with almost any food on the market, it’s all in the moderation. Overall, barley malt syrup is a healthier alternative to using sugar, but it can cause health concerns when consumed in high quantities.

In high quantities, it’s been linked to obesity, diabetes, and heart disease. The key is to reduce the amount of sweetener used.

Can I Make Bagels Without Barley Malt Syrup?

It might be tempting to forgo using barley malt syrup altogether especially when it’s not readily available, but bagels cannot be made without them.

Not only does barley malt syrup add the necessary level of sweetness and flavor, it also adds the right consistency.

Barley malt syrup is thick and sticky, something that is very much needed for the recipe to work.

Barley malt syrup is becoming a rather common substitute for sugar, but there are instances where it needs to be substituted.

The thick and sticky sweet substance adds a certain level of richness to recipes that call for the ingredient.

Of course, in situations where it’s not available, there are plenty of options that provide just as much flavor and the correct consistency for the recipe to work as expected.