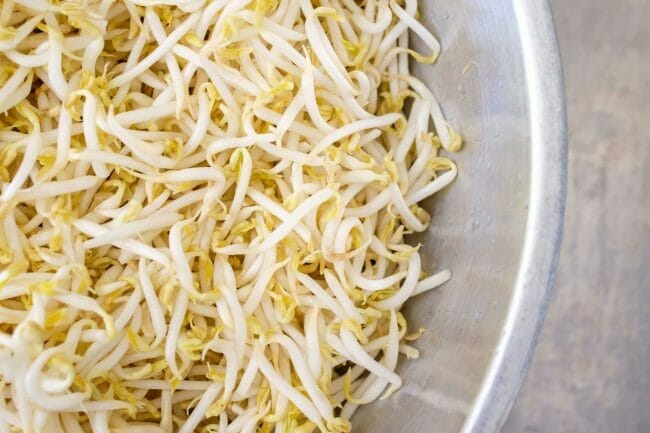 I have often needed a substitute for bean sprouts when cooking. While I do love the taste of bean sprouts, it is not an ingredient I usually have on hand.

I often find myself in the middle of cooking pad thai or whipping up a healthy pasta and suddenly needing a bean sprout substitute.

Maybe you just don’t like the crunch of bean sprouts and want a softer substitute. No matter the reason, I have the perfect bean sprout substitute for you!

Soybean sprouts are created the same way mung bean sprouts are made. Soybeans are soaked and held in a damp environment. After a few days, small sprouts pop out of the soybeans.

Soybean sprouts have a stronger flavor than mung bean sprouts. They are a little chewy and thicker.

They work well as a substitute for bean sprouts in pad thai since they are cooked and tenderized.

Thinly sliced snow peas are a fantastic substitute for bean sprouts. Snow peas may be a little thicker and crunchier but the watery, crisp flavor is almost identical.

Use snow peas to replace bean sprouts in pad thai and other cooked dishes. Cooking the sliced snow peas will help make them softer and more like bean sprouts.

Canned bamboo shoots are often added to pad thai to give the dish a nice crunchy texture.

Slice the bamboo shoots into thin strips and use them to replace bean sprouts. You will get the crunch you are looking for without adding any crazy flavors to your meal.

Still, wondering what to substitute for bean sprouts in pad thai? Bok choy may be your answer!

Bok choy is white Chinese cabbage. It has young, tender leaves and a thick, crunchy base.

Thinly slice bok choy and add it to your pad thai in place of bean sprouts. You will love this easy, flavorful, healthy substitution for bean sprouts.

Sunflower sprouts are made just like mung bean sprouts. A small sprout pops out of a damp seed and is ready to eat!

Sunflower sprouts are larger than mung bean sprouts. Some people find them to be bitter but this may work well in your favorite salad or sandwich.

Try tossing the sunflower sprouts in dressing or with some herbs before adding them to your recipes.

This will help reduce the bitter taste and make them just as delicious as classic bean sprouts.

Have you ever wondered if you can use canned beans in place of bean sprouts? The answer is yes! You definitely can.

Try replacing bean sprouts with canned beans. They are both beans, after all! Canned beans will add instant nutrition to your salads.

Canned beans will not give you the same crunch as bean sprouts but the nutritional value will still be there.

Can you substitute alfalfa sprouts for bean sprouts? This may be one of the most frequently asked questions I receive!

The simple answer is yes, you can use alfalfa sprouts in place of bean sprouts.

Alfalfa sprouts are usually sold fresh. You can find them in the produce section of your local grocery store.

However, they are quite nutritious, tasty, and great on sandwiches and salads.

Enoki mushrooms look a lot like bean sprouts. They are long and skinny with a cap on the end. They even have the same bean-like taste as mung bean sprouts.

Enoki is best when cooked. Add them to your pho or any soup at the beginning of the recipe so they have time to simmer and soften.

This will also give the mushrooms time to impart their tasty flavor into the broth.

Both bean sprouts and cabbage have very high water content. Both have a similar mild and watery taste. That is exactly why you can easily use cabbage in place of bean sprouts.

Cabbage is much larger than bean sprouts so you need to slice it thin to be a similar size.

Add the cabbage to your soup right before serving to ensure the crispy texture stays.

Bean sprouts are made from mung beans. Why not replace the sprouts with the beans themselves?

Mung beans have a tasty sweet and nutty taste. They are very high in protein and make a wonderful addition to soups, especially pho.

Look for canned mung beans that are ready to drain and use right out of the can.

What Are Bean Sprouts?

Bean sprouts are the sprouting seeds from certain types of beans. The bean sprouts you find in most grocery stores are made from mung bean seeds.

However, almost any kind of bean seed can be sprouted and eaten as a young, tender shoot.

Since most bean sprouts that you find in grocery stores are mung bean sprouts, I will be looking for a replacement for these.

When I mention “bean sprouts” I am referring to mung bean sprouts specifically. These are the type of bean sprouts most often used in food, salads, and pho.

How To Use Bean Sprouts In Cooking

Bean sprouts are very common in Asian cuisine. They add a nice crunch to many different dishes.

Bean sprouts are made up primarily of water. They are quite refreshing and juicy. They also have a very mild taste that is appealing to many people.

You can find bean sprouts in many different salad recipes. They are also added to noodle dishes and soups. Pad thai and pho dishes often have bean sprouts added for crunch and flavor.

Bean sprouts are often sold canned and can be found in the Asian section of your local grocery store.

Open the can of bean sprouts, drain the canning water, and then use the sprouts in any of your recipes.

You may be able to find fresh bean sprouts in specialty grocery stores. Fresh sprouts can be tossed right into any dish as-is.

How To Make Bean Sprouts

Making your own bean sprouts is actually insanely easy. You will need whole dried mung beans and a flat tray or container to hold the growing sprouts.

Here is how to grow bean sprouts at home.

Isn’t it easy to make bean sprouts? Only sprout about 1 cup of mung beans at a time. This will make quite a lot of bean sprouts. They expand as they grow!

Bean sprouts are considered to be very nutritious food. They are low in calories and high in vitamin C. Bean sprouts have a good amount of protein and fiber as well.

There is a high concentration of peptides in bean sprouts which are good for reducing blood pressure.

The antioxidants in the sprouts can help improve eye health and prevent certain types of cancer. The fiber in the sprouts helps with digestive wellness.

All in all, bean sprouts are very healthy food. There are actually almost no downsides to eating bean sprouts.

So pile them on high or use one of these other healthy bean sprout substitutes to take their place!

If you still have questions about the best bean sprouts substitute or just about sprouts in general, take a look at these frequently asked questions.

Hopefully, these direct answers will help!

What Is A Good Substitute For Mung Bean Sprouts?

Alfalfa sprouts are the best substitute for sandwiches and salads. Enoki mushrooms are a good replacement for bean sprouts in soups.

Can Bean Sprouts Be Eaten Without Cooking?

You can eat bean sprouts without cooking them first. In fact, they are deliciously served raw on top of a sandwich or in a soup.

Can I Use Canned Bean Sprouts Instead Of Fresh Ones?

Canned bean sprouts are convenient and easy to find. They taste just as good as fresh bean sprouts.

Drain the canned bean sprouts and give them a good rinse. They are then ready to use in any recipe!

Next time you are making pad thai and need the best bean sprout substitute, remember this list!

There are many delicious ingredients that mimic the flavor and texture of bean sprouts perfectly.

Don’t forget to try to grow your own sprouts! You will never run out of bean sprouts when you have fresh, tender shoots sprouting on your kitchen counter. Enjoy!