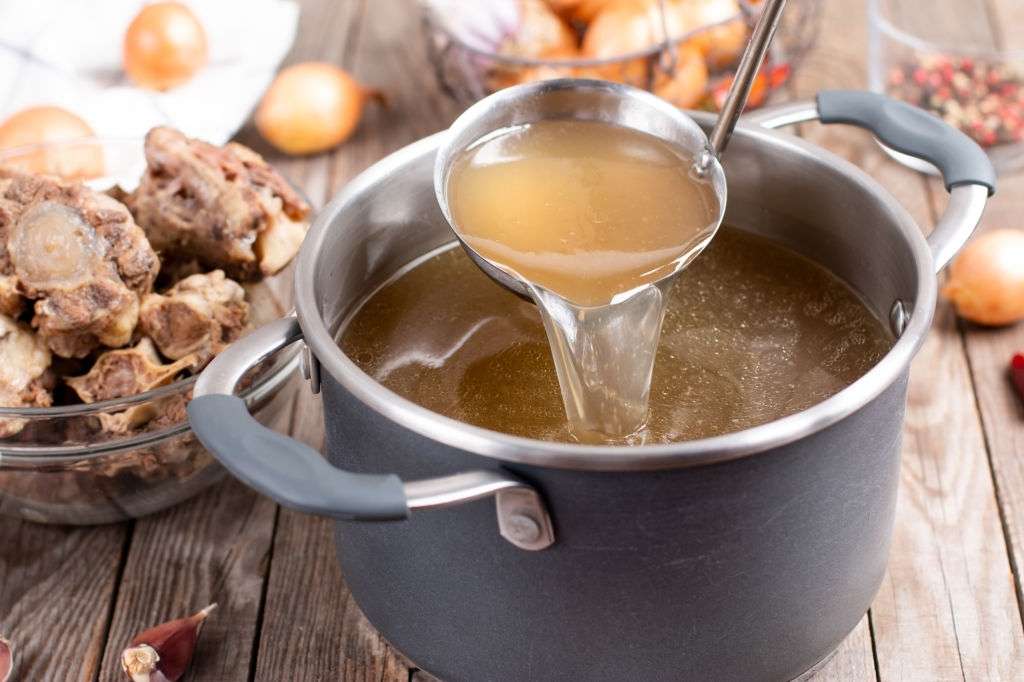 I use beef broth in a lot of recipes. I use it to make soups, gravies, sauces and stews. Beef broth adds such a rich, deep flavor that is key to so many great recipes.

While I try to always have a carton or can of beef broth in my pantry, I do occasionally run out. I have found myself needing beef broth many times and scrambling for an acceptable substitute.

Read our recommendations below and learn how to make your recipes more flavorful when using water to replace beef broth.

Beef broth and beef stock can be used interchangeably. One can replace the other in any recipe, using the exact same quantity. Beef stock has the same number of calories, fats and proteins when compared to beef broth.

Beef stock has no additional spices of flavorings so it has a pure, beef flavor. You may want to add a little more spice to your recipe when using beef stock to replace beef broth.

Beef consomme is a clarified beef broth. It is made with ground beef, eggs, onions, carrots, parsley and tomatoes.

The mix is simmered slowly for several hours without stirring. The meat, veggies and herbs are then skimmed off the top, leaving behind a very clear, flavorful beef broth.

Beef consomme is often eaten on its own as a soup. However, you can use it to replace beef broth in any recipe using the same quantity of consomme as broth. Your recipes will have even more delicious beef taste when you use consomme!

Beef consomme does have more calories than beef broth with about 75 calories per serving. It is also higher in protein with 15 grams of protein per cup.

Chicken broth is made the same way as beef broth except using chicken bones and meat rather than beef. It has a lighter flavor and lighter color than beef broth. However, it is still very flavorful and tasty.

You may want to add a teaspoon of soy sauce or Worcestershire sauce for every chop of chicken broth. This will enhance the flavor and also make it a darker color, more similar to beef broth.

Use the same amount of chicken broth to replace beef broth in any recipe. Chicken broth only has 10 calories per one cup serving and one gram of protein.

Add bullion cubes to boiling water according to the package directions. Once the beef bullion cubes are completely dissolved, the broth can be used to replace beef broth in any recipe.

Bullion cubes have the same nutritional make up as beef broth since they are essentially the same thing!

Making your own beef broth may be the best way to replace canned beef broth in any recipe.

You can control the spices and herbs in the recipes, making it suited to your personal tastes. Making beef broth is also a great way to utilize leftover beef bones or meat.

Use my easy beef broth recipe below to make a tasty, homemade beef broth. I highly recommend doubling or tripling the recipe and freezing some of the broth. Anytime you need beef broth, you will have it on hand!

Soy sauce is a good substitute for small quantities of beef broth. It is especially great to replace beef broth in Asian style recipe. You can find soy sauce in almost every grocery store so it is a convenient beef broth substitute as well.

Soy sauce has a stronger flavor than beef broth. For every tablespoon of beef broth, replace it with one teaspoon of soy sauce and two teaspoons of water.

Soy sauce has about eight calories per tablespoon and one gram of protein. It is very high in sodium with about 902 mg per tablespoon. Keep this salty taste in mind when you use it to replace beef broth.

Liquid aminos taste very similar to soy sauce. It even looks the same as soy sauce with a black, liquid appearance. Liquid aminos are vegetarian, gluten free and lower in sodium than soy sauce.

Use liquid aminos to replace beef broth by replacing every tablespoon of beef broth with 1 teaspoon of aminos and 2 teaspoons of water or chicken broth. Using chicken broth with the aminos will give your recipe a creamy, bright flavor.

Worcestershire sauce is often served alongside beef. The interesting, umami flavor brings out the flavor of beef and also makes a good substitute to beef broth.

Worcestershire sauce has 11 calories per tablespoon and 167 mg of sodium which is less than soy sauce. It contains no protein or fats.

Add a splash of wine or beer to your recipe in place of beef broth. This is a great way to add rich, interesting flavors without using broths.

Wine and beef are often used in gravies, sauces and soups already. You might as well add a little more!

Use about ⅓ cup of red wine or beer and ⅔ cup water to replace beef broth in a recipe. Red wine is low in calories but high in minerals and flavor!

Using water to replace beef broth can leave your recipes tasting a little bland. Add a splash of soy sauce, Worcestershire sauce or red wine to increase the flavor.

You can also adjust the herbs and seasonings in your recipes, adding a little extra and giving it a taste after every addition.

Bone broth is essentially beef broth that is cooked for twenty four hours or longer. Cooking the beef bones for an extended period of time helps extract all the nutrients from the bones.

Bone broth has lots of collagen, amino acids and protein. It has been shown to help increase bone strength, build muscle and promote skin health.

Use bone broth to replace the same quantity of beef broth in any recipe. Bone broth has about 40 calories per cup, no fat and no carbohydrates.

Aquafaba is the liquid found in a can of beans. It is a great source of vegetarian and vegan protein. It is also a very useful ingredient.

Use the aquafaba mixed with water to replace beef broth in a recipe. ½ cup of aquafaba and ½ cup water can replace one cup of beef broth.

Your recipes will still get a protein rich ingredient that has a nice, mild flavor.

Vegetable broth is a wonderful replacement for beef broth. It is a perfect vegetarian option to make your recipes meat-free.

Vegetable broth is made by boiling vegetables and herbs to make a broth. The herbs and veggies are discarded and a light colored broth remains, ready to use!

You can use the same quantity of vegetable broth to replace beef broth. Vegetable broth only has 15 calories per one cup serving and about 1.5 grams of protein.

Mushroom broth is not only vegetarian but it is also a vegan substitute for beef broth.

Mushroom broth is made like vegetable broth but using only mushrooms and herbs. It has a rich, umami flavor that is quite similar to beef broth.

Mushroom broth can be used to replace beef broth with a 1:1 ratio. Mushroom broth only has 5 calories per serving, no fat and 2 grams of protein per one cup serving.

What is Beef Broth?

Beef broth is made by boiling beef bones and meat in water. Any cuts of beef can be used to make beef broth and it is a great way to use any scraps of meat or leftover bones.

Sometimes vegetables and seasonings are added to the mix as well to add even more flavor.

Carrots, onions, celery, thyme, basil and garlic are all popular additions to beef broth. The vegetables and meat are strained and discarded, leaving behind a rich, dark brown broth.

Broth is usually made fairly quickly. The mix is brought to a boil and cooked for a few minutes before being strained.

Beef broth has a very clean, mild flavor. Since it is cooked for such a short time, the beef flavor is not too strong. The light taste of beef broth makes it great in all types of soups as it won’t overpower the dish.

How to Use Beef Broth

Beef broth is most often used to make soups and stews. It is the base broth for many different types of soups in all different cuisines. French onion soup and classic beef stew are two great examples of soups that rely on the flavors of beef broth.

Beef broth can be used to make light gravies, in au jus or sauces like this one from Creme de la Crumb. It is also a good ingredient to use to cook grains.

Pot roast is often cooked in beef broth and beef broth can be a main ingredient in your favorite chili recipe. Slow cooker recipes frequently depend on beef broth to keep meats tender and juicy as they roast.

Beef broth is a nutrient dense food. It is high in Selenium, iron, vitamins B2, B3 and B12 and also sodium. It is also a very low calorie food. Here is a quick look at the nutritional makeup of one cup of beef broth.

As you can see, beef broth, on its own, is a very low calories, low fat food.

Beef broth on it’s own may be a streamlined food but adding pastas, grains, vegetables and meats to make a soup will greatly alter the nutritional values of the meal.

Beef broth has been shown to have many health benefits. Here is just a few of the benefits of beef broth:

I love the flavor that beef broth adds to recipes. I also know that many of you may not love beef broth as much as me. Hopefully one of these perfect beef broth substitutes will work well for you!