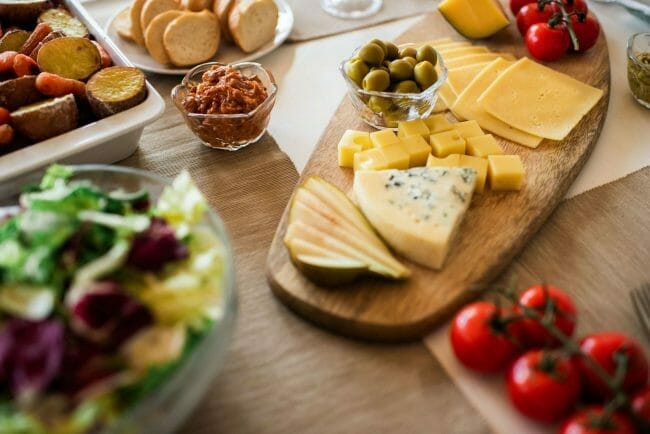 I am a huge fan of Butterkase cheese. The soft German cheese pairs so well with a cold glass of beer at the end of a long day. The only problem is that Butterkase cheese can be hard to find.

Unless you live in Germany or Austria, your local grocery store probably doesn’t carry Butterkase cheese.

Luckily, there are some great substitutes for Butterkase cheese that you can try. They may not be identical to the real, soft cheese but they are pretty darn close!

Raclette cheese is a semi-hard cheese that is made in the Swiss alps. The cheese comes in blocks or wheels and is perfect for melting into mac and cheese.

Raclette has a buttery taste just like Butterkase. It is a little more tangy so you will want to replace Butterkase with half the amount of raclette.

If your mad and cheese recipe asks for 1 cup of shredded Butterkase, use ½ cup of raclette to get the same flavor.

The cream cheese is a nice soft cheese that is much softer than the butter case but blends into mac and cheese just as buttery.

Cream cheese will add a nice tangy flavor to your mac and cheese that Butterkase does not have. However, the creaminess will be the same!

If your recipe asks for 1 cup of shredded Butterkase, use ¾ cup of cream cheese. Cream cheese is much more dense and tangy so you will need less of it in your recipe.

Cheddar cheese is the classic mac and cheese. It is in almost every mac and cheese recipe out there! This is thanks to its creamy texture when it melts and its mild flavor.

Use cheddar cheese to replace Butterkase, using the exact same amount of shredded cheese as Butterkase in your recipes.

Brick cheese is an American cheese that is fairly hard. It has a delicious, buttery taste just like Buttercase.

Brick cheese can be shredded and mixed into your mac and cheese recipe in place of Butterkase.

You can use the same amount of shredded brick cheese to replace shredded Butterkase. The flavors are so similar that you may not be able to tell the difference!

Gouda is a sweet and creamy cow’s milk cheese. It is a little more yellow than Butterkase and will give your fondue and orangish hue. However, the buttery taste is very close to Butterkase.

Use the same amount of gouda to replace butterkase. Shred or sliced the gouda before tossing it into the fondue. This will help it melt faster and easier.

This is another cow’s milk cheese, just like Butterkase. Gruyere is cured for about 6 months, giving it a much stronger taste than Butterkase.

You can replace Butterkase using gruyere with a 1:1 ratio in your fondue recipe.

Gruyere melts very well making it perfect for fondue. Gruyere will help make any fondue recipe thick and smooth. It is perfect for dipping your favorite crackers and veggies!

Emmental cheese is harder than Butterkase. The Swiss-type cheese is made with unpasteurized cow’s milk and has a fairly mild taste.

Emmental may be more firm but it is just as creamy as Butterkase once you pop a piece in your mouth.

Emmental can be shredded and added to fondue just like Butterkase. Use the same amount of Emmental to replace Butterkase in any fondue recipe.

Beaufort cheese is much more firm than Butterkase but it has a very similar, buttery taste. It is perfect for melting into fondue.

You can replace Butterkase with shredded Beaufort cheese, using the same quantity of cheese.

It may be a firm cheese but it will blend right into your favorite fondue, giving it a delicious, salty flavor.

Fontina is a semi-hard, Italian-style cow’s milk cheese. It has a rich, creamy and nutty flavor. It also has a buttery taste that gets smoother with age.

Fontina is a great substitute for Butterkase on a cheeseboard. It is sliced well and tastes similar. You can find fontina cheese in most grocery stores making it a convenient substitute as well.

Sliced havarti can be perfect for replacing Butterkase on a cheeseboard. The similar texture and flavor makes it a great substitute.

Brie cheese is a nice replacement for Butterkase on a cheeseboard. It has a buttery texture and tastes just like Butterkase.

Brie is a little softer than Butterkase. It is best when spread on crackers or bread and is too soft to slice on a tray. It will taste great to anyone looking for the buttery flavor of Butterkase.

Sliced mozzarella cheese is a delicious addition to any cheese board. It is softer than Butterkase but has a similar, mild flavor.

Mozzarella is also very easy to find so you can likely get it in any local grocery store.

Look for fresh mozzarella which has the most flavor and best texture.

Butterkase cheese is a semi-soft, cow’s milk cheese. It is very popular in Germany and Austria.

Butterkase cheese has a mild buttery flavor. It has a similar flavor to gouda or munster cheese.

The name “butterkase” literally translates to mean “butter cheese”. While it does have a buttery taste and texture, the cheese is not actually made with butter.

The pale yellow cheese may be confused for a stick of butter. They do look quite similar.

How To Use Butterkase Cheese

Butterkase cheese is most often used to make macaroni and cheese. It melts to be creamy and thick, perfect for coating pasta. It is great for making fondue thanks to the buttery taste and texture.

Buttercase cheese is also perfect for slicing and serving on a cheeseboard. The soft cheese is interesting and different, giving your cheeseboard versatility.

How Is Butterkase Cheese Made?

Making Butterkase cheese is a fairly straightforward, classic cheese making process. It starts by pasteurizing milk and letting it sit to allow natural cultures to develop. Rennet is added to the milk and left to coagulate.

The length of time the milk is heated and cooled will determine the taste of the cheese. Butterkase is more acidic when the curds rest for a short period of time.

A sweeter Butterkase cheese can be made by removing some of the whey and adding extra water in order to slow the acid development.

Is Butterkase A Melting Cheese?

Yes. Butterkase is a fantastic cheese for melting. It melts into a creamy, smooth mix that is great for fondue and mac and cheese.

What Is Similar To Butterkase Cheese?

Havarti and fontina cheese are the closest cheeses to Butterkase. They both have a similar taste and texture.

What Kind Of Cheese Is Butterkase?

Buttercase is a semi-soft cow’s milk cheese. It is made with pasteurized milk and aged for just one month before it is ready to enjoy.

Butterkase is such a fantastic cheese. However, a good substitute can work well, especially when you can’t find butterkase in a store near you.

Give these butterkase replacements a try and let us know which you like best. Do you love creamy gruyere in your fondue? Or maybe you will fall in love with sliced havarti. You really can’t go wrong with any kind of cheese!