Why Is Butterscotch Amber So Expensive? [Top Four Reasons, Plus Its Alternatives]

It is the stuff of legends. This beautiful Jurassic jewel has been in the spotlight for decades, but it has actually been around for millions of years. While considered a gem, Butterscotch Amber is surprisingly not a real gemstone. It is actually fossilized tree resin. Want to know why butterscotch amber is so expensive? The answer is in its origins.

Butterscotch Amber prices can range from tens to tens of thousands of dollars, with the price per gram averaging between $13 to $15. However, just like a diamond, the color and carat, or in this case grams, plays into the price of this precious gem. Additionally, baltic amber is harvested by hand. This increases labor costs. It also must be shipped from Northern Europe.

Lastly, butterscotch amber is the purest form of Baltic Amber. This type of resin is said to have healing properties.

Top Four Reasons Why Butterscotch Amber Is So Expensive

1. Color Of The Butterscotch Amber

Butterscotch Amber is the most genuine form of Baltic Amber. The BBC reports that “more than 90% of the world’s amber comes from the Russian exclave, sandwiched between Poland and Lithuania. [..] It’s a major source of income for the region [with] the local Kaliningrad Amber Factory [extracting] 250 tonnes (550,000 pounds) of it in 2014.”

One would assume that because this amber, otherwise known as succinite, is readily found in the region, it would come at an affordable price. However, the value in this substance stems from the coloring. Most individuals think of the classic, clear golden coloring showcased in the Jurassic Park movies. In case you didn’t know, there are over 250 different colours of amber.

Butterscotch Amber, has very unique coloring, taking on a gorgeous milky appearance similar to that of an egg yolk. Hues range from white to sunshine yellow. This coloring is due to tiny bubbles that have accumulated in the resin, giving it that opaque appearance.

The butterscotch coloring of the amber is more rare in nature, making it more valuable, and thus, more expensive. This is especially true of the white varieties, which constitute less than 2% of the world’s amber. This shade closely follows blue and red amber — the rarest amber colors. However, this is not the only price factor.

2. Shading Of The Butterscotch Amber

According to the International Gem Society, “Amber has been preserved for at least 30 million years.” Otherwise, it is classified as copal. One of the attributes that leads to a more expensive price tag is the age, and therefore the shading, of the gem. The Gemological Institute of America notes that “Baltic amber is geologically older in origin and generally more valued in the market”.

One of the indications of age is the physical appearance of the resin. “As polished amber continues to [mature], it oxidizes and darkens on the outside. Many people prefer the look of oxidized amber.” Thus, the richer the color, the more expensive the butterscotch amber will be for purchase! 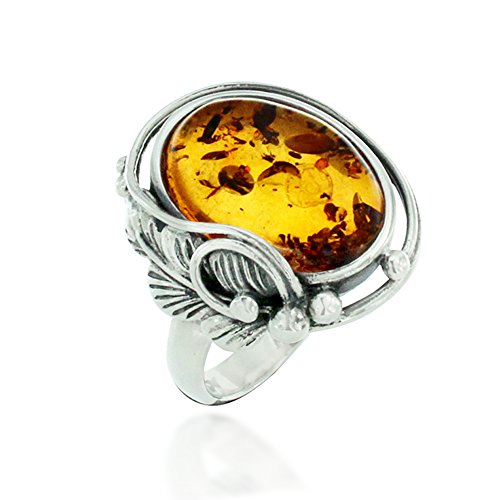 3. Process Of Obtaining The Butterscotch Amber

Baltic Amber is the most prevalent version of this gem and it takes millions of years to form. In addition, finding the product is not as simple as tapping into a tree trunk. While you would assume that a tree resin is harvested from a forest, it actually washes up out of the sea and other water sources. While there are deposits in Arkansas and California, this variety comes from across the globe.

Baltic Amber “comes mainly from around the shores of the Baltic Sea, from today’s Lithuania, Latvia, Russia (Kaliningrad), Poland, southern Sweden, northern Germany, and Denmark. […] Amazingly, the fossil resin ‘was apparently eroded from marine sediments near sea level, carried ashore during storms, and subsequently carried by water and glaciers to secondary deposits across much of northern and eastern Europe’ over a period of approximately twenty million years. […] Most amber from the Baltic shore was harvested from shallow waters and beaches where it had washed up”.

Unfortunately, this means that there will be lucrative years as well as times when this coveted gem seems to be scarce. Moreover, gemologists must then identify the different types of amber. This process takes time and manpower. Consequently, this leads to an expensive price tag on your butterscotch amber.

Additionally, just like with any other imported good, there are taxes, insurance charges, and other shipping fees that factor into the cost of this product. 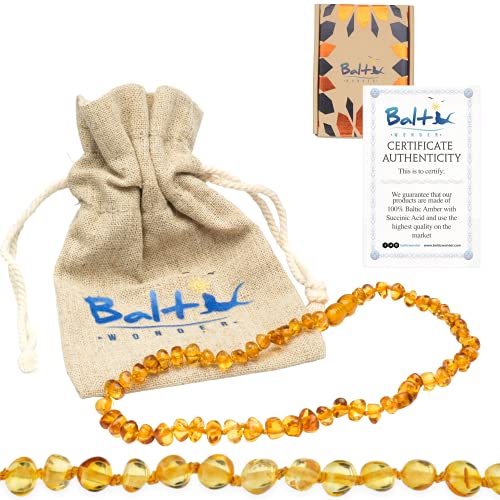 Every parent has heard of the old wives’ tales about amber teething necklaces and their magical ability to soothe an infant’s pain and colic symptoms. Infants naw on the amber beads and it works as a natural pain reliever. Additionally, adults use it to moderate their thyroid function, lower stress, and even fight off the common cold.

These benefits come from the succinic acid present in the resin. There have been plenty of skeptics over the years. However, research presented by the American Chemistry Society found that these superstitions may hold some truth.

“For centuries, people in Baltic nations have used ancient amber for medicinal purposes. Even today, infants are given amber necklaces that they chew to relieve teething pain, and people put pulverized amber in elixirs and ointments for its purported anti-inflammatory and anti-infective properties. Now, scientists have pinpointed compounds that help explain Baltic amber’s therapeutic effects and that could lead to new medicines to combat antibiotic-resistant infections.” 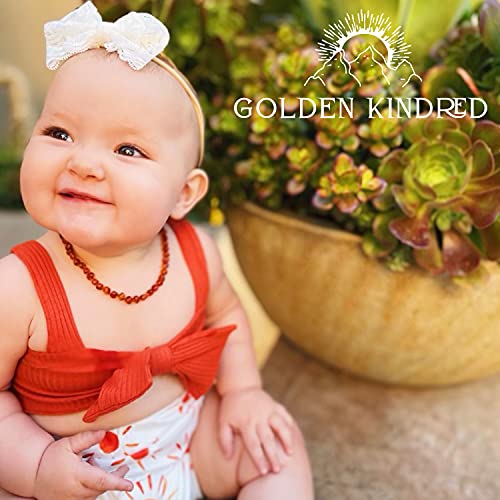 As of the Spring of 2021, “Elizabeth Ambrose, Ph.D., who is the principal investigator of the project, [notes that] we have now extracted and identified several compounds in Baltic amber that show activity against gram-positive, antibiotic-resistant bacteria. […] Abietic acids and their derivatives are potentially an untapped source of new medicines, especially for treating infections caused by gram-positive bacteria, which are increasingly becoming resistant to known antibiotics.”

This is a major breakthrough for science. One that will drastically raise the price of this already coveted substance. Therefore, if you are looking to obtain some butterscotch amber, it is best to invest soon before the expensive price tag skyrockets!

Unfortunately, not all people are honest. Many times individuals will pass off other materials as genuine baltic amber. These can include glass, copal, celluloid, to name a few. This means that you need to have this gem authenticated. This will ensure that you are getting the health benefits and your money’s worth!

However, the easiest way to determine if amber is real is to essentially damage it. It is about as durable as your fingernail. Thus, you can scratch it or apply heat to quickly figure out if it is genuine.  Of course, when purchasing amber, the last thing you want to do is damage the gem in order to authenticate it. The saltwater test is a fantastic alternative!

When you place this gem in saltwater, it will float! Therefore, dissolve six teaspoons of salt into a glass of water. If the beads rise to the top, you have ruled out all other materials, except copal.

Thus, there are a few other steps to take in order to determine if the amber is real. “Copal should produce a resinous smell if rubbed hard on the heel of the hand….[However,] the ‘when all else fails’ test (applied with discretion) is a test of the effect of acetone on the specimen.” If it is amber, the gem will remain unchanged. Copal will soften within seconds.

Amber is a very lightweight material. This means that jewelers can make a seemingly large piece for a reasonable price. Most baltic ambers range from $13-$15 a gram. A gram equals five carats.

Therefore, you can get an unpolished teething necklace for as little as $30. Conversely, this price increases with polished beads and larger stones. These changes can lead to genuine amber jewelry costing hundreds, if not thousands of dollars.

Unfortunately, unless you have the means to head to the areas surrounding the Baltic Sea, the price for this healing gem is not going to change very much. While the price of amber is highly dependent on the color, it can increase tremendously if there are inclusions. The coveted insect entrapped in the resin can bring a big price tag. However, the opaque shading of butterscotch amber takes this expensive factor out of the equation.

If you are looking for a more local deal, your best bet is to purchase from a reputable jeweler or gemologist. Many times after the holiday season, they offer temporary price cuts. This is your time to purchase for the best price!

If the price of amber is too much, consider purchasing copal instead. As mentioned above, this is a fossilized tree resin that has just aged for less time. It will have similar imperfections and coloring, just without the health benefits. However, it will theoretically help to reduce anxiety and stress like amber.

Glass and celluloid beads can also provide a similar look. All of these options cost just one to two dollars per gram, making them extremely affordable. 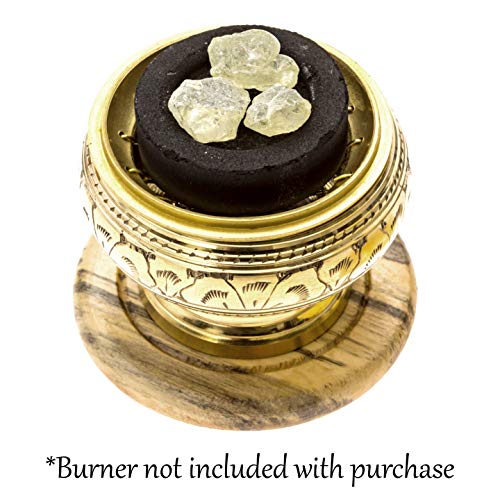 Whether or not you believe in the healing qualities of this Succinic Acid, butterscotch amber is a beautiful gem that comes is a unique shade of yellow. This makes it a gorgeous accessory for those who love black, white, and blue apparel.