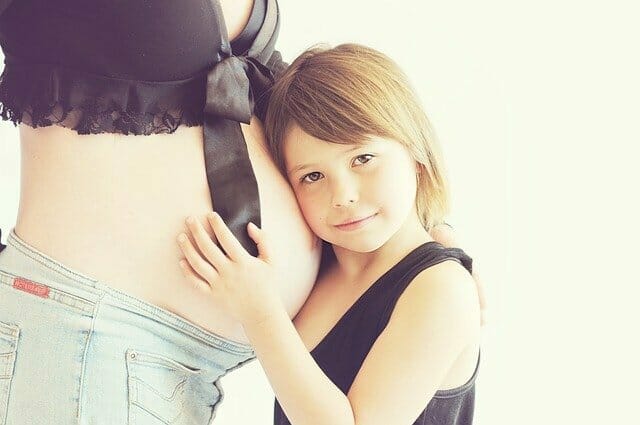 There is a phenomenon amongst women experiencing a second, third, or even fourth pregnancy where their children can sense their pregnancy before being told.

You can find hundreds of stories on the Internet about mothers’ experiences with their toddlers and little ones talking about their pregnancy – sometimes even before the mother knows she’s pregnant.

How is this possible? Do children have a “sixth sense” when it comes to their mothers being pregnant?

After speaking to a few moms, we concluded that children can sense pregnancy. Many times, it is a result of vibes or clues they read of the mother. In fact, some even believe that children have a unique sense. However, the academic and science world did not prove it.

In this article, we will explore these firsthand experiences so you can decide for yourself whether or not children can sense when their mothers are pregnant.

Can A Child Sense When You’re Pregnant?

There is no official answer to this question. While some children have shown that they sense when their mothers are pregnant, others do not.

Unfortunately, the answer to this question is not one-size-fits-all and depends on the child and the situation.

There are a number of factors that contribute to a child’s sense when their mother is pregnant.

As mentioned above, official scientific studies have not been conducted to reveal an answer.

However, if we go off the experiences and stories written on multiple forums such as Quora, What to Expect, and Netmums, you may lean towards the possibility that it’s true.

Whether or not you believe that children can sense pregnancy is ultimately up to your own experience and beliefs. There are common behaviors and experiences seen in toddlers, though.

Can Toddlers Tell When Someone Is pregnant?

According to the message boards and forums, toddlers are able to tell when someone is pregnant.

In fact, there is a trend in the behaviors that children show when they can sense that their mothers are pregnant.

While this could be a coincidence and simply chalked up to the development and natural behavior of toddlers, you may decide otherwise.

Child Behavior When Mom Is Pregnant

Many pregnant mothers find that their children start to touch and rub their bellies, even if they are not showing a baby bump yet.

Children are often very touchy and enjoy cuddling and being in contact with their mothers.

However, when a mother is pregnant, toddlers may feel more drawn to touch her stomach.

Lianne R shared her experience on Netmums about her child touching her stomach before she even knew she was pregnant.

“Before I found out I was pregnant, My 18-month-old daughter kept cuddling my tummy, which she had never done before. She’s not done it since, though.”

As toddlers age, they become more independent. They’ll begin playing by themselves and insisting that they can do certain things alone.

However, when they sense that their mother is pregnant, they can become more dependent on them.

Toddlers will become clingy with their mothers and follow them around the house. If left with another family member, such as a grandmother, they may cry when their mother leaves.

Some mothers describe their toddlers as having trouble sleeping unless they are in bed with them.

Others want to constantly have physical touch with their mothers. One user, Loops81 on Mumsnet.com, shared her experience of her toddler becoming very dependent before being told a new sibling was on the way.

“Does anyone have experience of this? One of the staff at my daughter’s nursery mentioned it to me – babies/toddlers getting clingy and upset when they sense their mum is expecting (as in, before being told).

I’m seven weeks pregnant and we haven’t told anyone, but my 2.5 year old (who is normally easy to put to bed and reliably sleeps through) has been acting up at bedtime, waking screaming in the early hours, and won’t sleep if I’m not sat by the bed holding her hand.”

Speaking About A New Baby

It’s difficult to tell if the reason why a toddler may be talking or mentioning a new addition to the family.

They may have seen an episode of their favorite show where a character gets a little brother or sister.

Maybe they overheard someone talking while in daycare or preschool about a baby on the way.

Whatever the reason, pregnant mothers will often be shocked if they hear their toddlers talking about babies before knowing it’s a reality.

Quora user Ann Sheaffer Gibert shared her experience when her daughter bought books about being a big sister without anyone knowing she was pregnant.

“Over the Christmas holidays, my husband took our 4-year old to the library to check out some books, and when they came back and I looked at her selections, I asked him if he’d had anything to do with her selections. He hadn’t.

But Every. Single. Book. was about new babies, being a big sister, etc. So, we told her, since she “knew” anyway. Her response, which I’ll never forget, was “Oh, Mommy! This is a very special day!”

There are even some instances where children outright tell their mothers that they are pregnant before the mothers even have a sense of it.

A number of women have shared that their children pointed right at their stomachs and said something along the lines of “There’s a baby in there!”

Surely enough, after taking a pregnancy test, there was, in fact, a baby before they even knew it.

This could be the most shocking behavior mothers see from their toddlers when considering whether or not children can sense pregnancy.

Our Observant Little Ones

We often don’t give toddlers and children the credit they deserve when it comes to observing their surroundings.

As everything is new to them, they are keen on paying attention to what’s around them and soaking it all in.

From physical experiences to listening to conversations to being in tune with the emotions that are around them, children can sense more than we may think.

For example, children are often very in touch with their mother’s emotions. If a mother is feeling stressed or sad, her child will automatically pick up on these feelings and do what they can to comfort her.

The same may go for when she is pregnant. Children may be able to feel the shift in hormonal balance during their mother’s pregnancy. This idea isn’t so far-fetched, though.

Just think about how that child grew inside his or her mother for nine months, completely in touch with her emotions and being.

Now, being out in the world for a short amount of time, there’s a high chance they are still very much in tune with her.

Of course, there are always other explanations for how children could sense pregnancy.

For those who truly do not believe children have an extra sense about these things, the following reasonings are used.

As previously mentioned, children and toddlers are very aware and observant of their surroundings.

No matter how quiet you may think you are when discussing your pregnancy, there are always little ears listening.

Now, you’re probably wondering how a child can understand these types of conversations.

While they may not understand the full extent of the conversation, they surely have a sense of the topic.

Even just the word “baby” mentioned can trigger their response of expecting a new sibling.

If your child goes to a preschool or daycare, they are exposed to external factors you are unaware of.

For example, a friend of theirs may have a new sibling on the way and told your child his or her mommy is pregnant.

This then introduces the vocabulary to your child to use when they see you.

It could be merely a coincidence that they mention this, and you find that you are, in fact, pregnant.

It’s extremely common for toddlers to go through a regression stage. During this stage, they become more dependent and revert to having the needs of an infant. This is perfectly normal and simply a stage of their development.

However, the behaviors shown in toddler regression can also be the same behaviors discussed earlier.

As your toddler experiences a regression stage and you find yourself pregnant at this time, you could be under the impression your toddler senses you’re pregnant.

Whether or not you believe that children can sense pregnancy is ultimately up to you.

There are numerous instances where pregnant mothers have been told by their children that they are having a baby.

Whether you go by science or documented experiences, there is no denying that children are in tune with their surroundings, especially their mother’s emotions.
You have the freedom to believe what you wish when it comes to children having the ability to sense pregnancy before they’re told about it.

I lean more towards the likeliness of this “sixth sense” based on all of the stories and the fact that children have such a close and intimate relationship with their mothers.

In all honesty, though, the deciding factor of whether you think children have this sense or not falls into your own personal experiences with the matter.