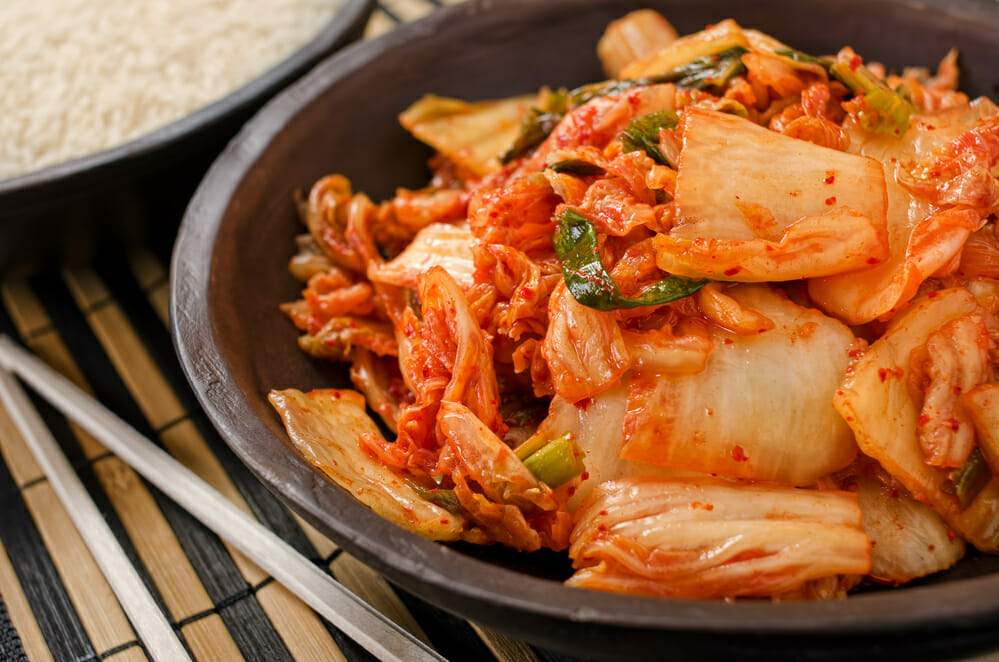 With the explosion of popularity that Korean cuisine is experiencing, it’s not surprising to hear that people are digging into kimchi.

Kimchi is a great way to add a spicy, low-calorie pop of flavor to salads, sushi, and rice.

The way it’s prepared, though, makes many people worried about it being a safe food option for pregnant women. Is it safe for pregnancy?

As long as kimchi is prepared and stored properly, there is no reason to worry about eating it as a pregnant woman. However, improper storage can turn this dish into a breeding ground for bad bacteria. The level of spiciness does not have an impact on kimchi’s safety in most cases.

Before you cook that next meal for your pregnant friend, it’s best to make sure that you know the full details of why kimchi is a “caution meal” among many parenting groups.

Kimchi is one of the most popular foods to come out of Korea. It’s fermented lettuce that has been carefully seasoned with a wide array of spices.

At times, some kimchi can also incorporate peppers and other vegetables.

Koreans love to use kimchi in a wide range of different methods, which means it’s very versatile. It’s a side dish, a garnish, or even a full snack on its own.

Pregnancy makes many foods that are typically very healthy a risk. Thankfully, most fermented foods are not part of that list of risky foods. Fermentation is totally fine—provided that it is done properly and contains no alcohol.

Does Kimchi Offer Any Benefits to Pregnant Women?

Yes! It’s true. Kimchi features a wide array perks for women who are expecting. These are the biggest ones you should be aware of.

Some studies actually show that eating fermented foods like kimchi can prove to be beneficial to a pregnant woman and her unborn child.

It can help increase the amount of healthy bacteria in her system and also potentially alleviate morning sickness.

Kimchi, in particular, happens to be a great pick for preventing gestational diabetes.

Along with helping balance the bacteria in a pregnant woman’s system, it also happens to reverse some of the adverse effects of eating sugar. This can help prevent gestational diabetes and improve your weight.

If you suffer from anemia, you’ll be happy to hear that kimchi has 14 percent of your daily recommended value in every 100-gram serving.

It also has 15 calories per serving and 1.1 grams of protein. So, it’s not a bad choice by any means.

Contains a Variety of Nutrients

Kimchi is a strong source of vitamins A, B1, B2, and C, as well as being rich in calcium, potassium, folate, and selenium.

Probiotics help with the prevention of yeast infections which means Kimchi is beneficial for women who are pregnant.

Kimchi has long been a staple of Korean women who yearned for something spicy and salty during those later trimesters.

This is a common choice of food for people in Korea, which is why you generally won’t see doctors asking people to restrict their intake when pregnant.

Can Kimchi Get Pregnant Women Sick?

If prepared or stored incorrectly, the answer is yes. With that said, a slightly bigger risk for some women is the smell of the kimchi.

Depending on how your morning sickness is behaving, you might end up getting sick to your stomach from the smell.

Why do Doctors Tell Pregnant Women to Avoid Kimchi?

Kimchi can be infested with pathogens like e.Coli, which can be potentially dangerous to both the mother and child.

Many doctors would prefer to be safe rather than sorry, since they can’t confirm whether the mother will be cautious and choose the right kimchi.

When Does Kimchi Become a Risky Food to Eat?

Kimchi is generally a safe food, but the problems you hear about start to occur when kimchi is improperly made or poorly stored.

Poor making and lackluster storage makes it easier for kimchi to become contaminated with harmful bacteria.

On a similar note, having kimchi that is extremely spicy can irritate both the mother and fetus.

So if you’re a fan of extreme amounts of ginger or ghost pepper, it may be time to set that aside for the time being.

So, kimchi has two main methods of preparation. The first is the “raw” method, and that means it’s fermented.
This can prove risky if done incorrectly. The second is the cooked method, and this includes exposing it to a high enough heat to kill pathogens.

Cooked kimchi is the use of kimchi in a cooked recipe. Common recipes that involve cooking kimchi include kimchi stew, kimchi ramen, as well as kimchi fried rice. (Yum!)

The pasteurization process kills off bad bacteria, and is often used in foods that are prone to bacterial contamination like milk and cheese. Kimchi can be pasteurized too.

The hard part about dealing with kimchi is that this food relies on good bacteria to ferment properly—and pasteurization kills off all bacteria.

However, many companies and restaurants have a method of pasteurization which involves reintroducing beneficial bacteria after the process. So, it’s a real thing.

Do you love raw kimchi? If so, then you either have to cook it or limit what type you buy.

Due to the sensitivity that pregnant women have towards pathogens, getting pasteurized kimchi is a must.

If you or your pregnant friend are getting craving some Korean food, then it’s important to keep a couple of guidelines in place.

These are the ones that you should strongly consider as part of your pregnancy diet:

1. Do not eat raw homemade kimchi unless you’ve sterilized it before.
Even if it’s your mother’s kimchi, the truth is that it’s a major risk.

Homemade kimchi has a higher chance of being exposed to pathogens, and you have to be fairly well-versed in sterilization and fermentation to make it work.

As a result, you’re going to have to skip out until it is time for the baby to arrive.

2. If you want to make quick raw kimchi at home, eat it as soon as you prepare it.

This is always an option, and it is a fast way to ensure that you don’t have to worry about pathogens in your kimchi.

Feel free to make as much of this stuff as you want, as long as you eat it ASAP and don’t let it ferment for more than 4 hours.

3. Stick to buying kimchi from stores, and make sure it’s pasteurized.

It’ll say if it’s pasteurized on the label. Some might also consider restaurants as store-bought, but it’s always best to ask about safe handling if you aren’t sure if it’s a good idea.

4. Do not eat kimchi that smells strange or spoiled.
There’s a distinct smell that kimchi gives when it gets moldy. It’s almost musky or nauseating. If eaten, rotten kimchi can cause nausea and vomiting—not good for a pregnant woman!

5. Don’t eat kimchi that has been open for more than three or four days.

If you buy store-bought kimchi, make sure that you keep tabs on it when you open it. Eating it within three to four days will ensure that pathogens have minimal time to take hold. Once your baby arrives, you can go back to enjoying that super-long lifespan kimchi has in a fridge.

6. When in doubt, throw that stuff out. If the kimchi doesn’t smell quite right or if you’re not sure when you last ate it, it may be time to toss that jar out.

7. Always ask your doctor about your food choices if you aren’t sure what to eat. A qualified doctor or dietician can help you steer your way through pregnancy. If you have a complicated pregnancy, then discussing your diet with your doctor is a must.

How Frequently Can You Eat Kimchi as a Pregnant Woman?

The current standard is that there is no need to limit your intake of all kimchi to a set amount.

It’s a low-calorie food that can help prevent gestational diabetes, so if you have a craving, eat as much as you like.

The big issue that people have with kimchi for pregnancy is the type of kimchi available and the preparation method.

As long as you avoid raw kimchi that has a tendency towards spoiling, you should be good to go.

If you are looking for a healthy Korean snack that will make you happy during pregnancy, cooked kimchi or raw pasteurized kimchi is a good option.

However, it’s always important to exercise caution when you’re eating kimchi that isn’t pasteurized or has remained open for quite some time.

The best way to make sure that you avoid the pitfalls of kimchi during pregnancy is to keep an eye on food safety procedures.

That little difference can make or break the experience you have eating kimchi during this special time of your life.