Can You Eat A Rooster? [+Recipes] 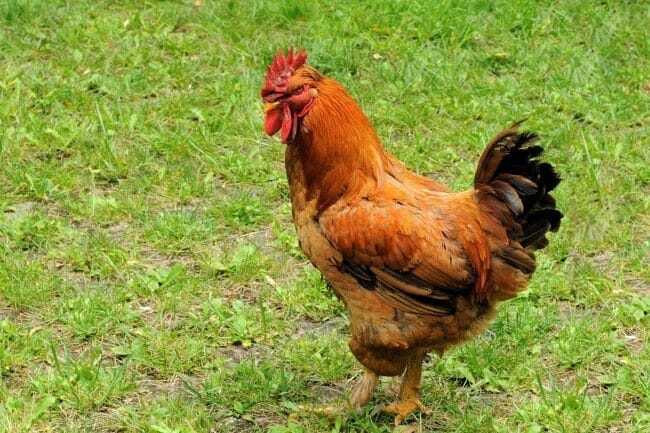 Cock-a-doodle-doo! If you’ve ever been woken by this sound in the pre-dawn hours (or worse, had to listen to it all night long), you’ve probably wondered if you can go out and strangle the rooster making it.

While rooster is not a common dish in Western culture, it is not only edible but can be quite delicious.

Generally speaking, you can eat a rooster. It tastes just like chicken because it is chicken. Rooster is often tougher and stringier than hen meat.

While rooster is less common in dishes due to the higher cost to raise them, its taste can actually be fuller. Some people say that the texture is different as well, although it can be used interchangeably with chicken when cooking.

The Differences Between Roosters and Chickens

First, let’s get clear on the different kinds of chicken you can eat and what to expect from the taste. Chickens can be divided into two groups: roosters (boys) and hens (girls).

Most chicken sold commercially is hen meat. While less common, rooster meat can be found on smaller farms and in specialty stores.

Understanding the types of rooster and chicken meat can help you learn what to look for when buying rooster meat.

Generally, roosters are not the easiest animals to keep. They can get angry, territorial, and often fight with other roosters that try to infiltrate their flock. For this reason, most flocks only have one or two roosters at most.

Farmers and commercial chicken production facilities that produce eggs or chicken meat to eat probably don’t have any roosters at all. The high cost of raising roosters means that they are rarely kept for their meat.

Instead, roosters are included in flocks to fertilize eggs and create more chickens. Silkie roosters and bantam roosters are two breeds that are popular. Some farmers get too many roosters or need to separate a temperamental rooster.

These birds can make great dinnertime additions. So why don’t more people eat roosters? The main reason is due to the high cost.

Most farms can’t afford to raise roosters for meat. Chicken is much easier to produce and can be sold for cheaper at the store, making it the top choice for many consumers as well.

Most chicken sold at the store is made from broiler chicken meat. These hens are fat and plump and are often kept in large facilities.

Hens can be kept in close quarters to other hens, making them a good and economical option for meat production.

This is the cheapest option to eat chicken meat but the flavor may not be as rich and full as rooster meat. For most diners, however, they are indistinguishable. Broiler chickens are the best choice for those on a budget.

These chickens lay eggs, which are then sold or consumed. Depending on the size of the farm, these hens can enjoy free-range lives where they get to graze and roam around a larger space or be kept in more cramped quarters.

While called chickens, capons are actually castrated roosters. This reduces the overall testosterone and makes them easier companions for other capon roosters. Most roosters sold for meat are capon roosters.

Capon rooster meat can be expensive since it still takes more space, money, and time to raise a capon than a cheaper broiler hen.

If you are looking for rooster meat, searching for capon chicken is one of the best places to start. They have the health benefits of rooster meat (less fat, rich flavor) and are easier to find than regular rooster meat.

This can be a great way to try rooster meat prepared by a chef who knows how to keep it moist, delicious, and flavorful.

Here are a few places to purchase rooster or capon online:

What To Do With Roosters On Your Farm

Chicken keeping is becoming more and more common, even for amateur or hobby farms. You may raise chickens and want to know if you can eat the roosters on your own farm.

Eating roosters might actually improve the well-being of your animals. If you have too many roosters in your flock, they can fight or be very difficult for animals and people to tolerate. How many are too many? Most farms only need one or two roosters.

You only need a few roosters to breed new chicks, if that is your goal. If you keep chickens for eggs or meat, you may not need roosters at all.

Keeping too many of these temperamental guys can actually do harm to your flock’s overall health.

They tend to fight and could cause injury to other animals, pets, or children. Even agreeable young roosters take up valuable resources like feed, space, and water.

To keep your farm operating efficiently, you may want to consider eating the roosters that do not contribute or that are not needed.

You can enjoy the health benefits of rooster meat as well. Chicken, including roosters, is a great source of lean protein.

Because rooster meat is often leaner than broiler chickens, it can contain even less fat. For those looking to decrease their fat intake but still enjoy the taste and texture of chicken, a rooster is a great option.

Tip: Make sure to cook your rooster meat to a safe temperature. The FDA recommends cooking poultry to an internal temperature of 165 degrees Fahrenheit.

Rooster meat is also great at taking on flavors of spices and herbs. You can enjoy a flavorful dish without adding a lot of chemicals, preservatives, or unhealthy ingredients.

The Taste Of Rooster

Rooster tends to be stringier and tougher than traditional or broiler chicken meat. Some foodies claim that it has a richer flavor and actually prefer rooster over chicken.

Compared to chicken, rooster meat can also be darker in color. They can also have fuller breasts, although this may not be the case with commercially-farmed chickens.

Overall, rooster and chicken are very similar in taste and can be used in the same types of dishes and cuisine.

The age of the rooster can impact the taste and texture. Older birds are often stringier and tougher.

They may require special preparation to make sure the meat is tender. This is true of both older hens and roosters.

Where To Find Rooster To Eat

Not a farmer? Don’t worry, you can still find a rooster to prepare and eat. Just be ready to search a little bit harder than just stopping to buy chicken at the grocery store.

It can be difficult to find rooster meat at your local supermarket. Your best path is to contact small, independent farmers.

They may have roosters that they need to part with to keep the rest of their flock healthy.

Don’t forget the hobby farmers who may not have the capability or expertise to slaughter roosters. You can do it yourself or pay a local butcher to prepare the meat for you.

You can also look for capon chicken, which is actually a castrated rooster. A mainstream grocery store may not carry it, but many specialty food stores do. You can also order capon chicken online and have it delivered right to your door.

Once you have your rooster meat, you should consider taking extra steps during cooking to make sure the flavor and texture are rich and tender. Rooster meat can be stringier and tougher than chicken.

This means you should cook it in plenty of juices. You can also brine it before cooking to help break down the tougher meat.

Brining uses salt and sugar to break down the tougher fibers. It is often used to tenderize turkeys for holiday cooking. Rooster meat can be tough, which makes brining a great first step for cooking roosters.

If you do decide to brine the rooster, make sure to heat the water before adding salt, sugar, and spices.

Then let it cool completely before letting the bird soak for 14-24 hours. You’ll get to enjoy a delicious and tender meal without worrying about food poisoning.

Tip: Add spices to your brine to boost the flavor. Spices that go well with poultry include paprika, cayenne pepper, garlic powder, onion powder, thyme, and rosemary. You can also season the bird directly with salt and pepper.

You can roast the rooster just like you would a chicken. The trick is to keep the temperature low and include plenty of liquid in your roasting pan. A slow cooker is another great way to do this with little work for you.

You can use rooster meat in the same way you would chicken. Some of the best recipes focus on keeping the meat tender and moist, as well as boosting the already rich flavor.

Cook a rooster in chicken broth, add carrots, celery, and potatoes (or any other veggie that you like in soup), shred the meat and add it back to the soup

Brine the rooster for 14-24 hours, season it with salt and pepper, roast until the internal temperature reaches 165 degrees Fahrenheit

Brine the rooster, season it with salt and pepper, and cook the rooster low and slow until the internal temperature reaches 165 degrees Fahrenheit. Let the meat cool and shred it with two forks.

Combine with barbecue sauce and simmer on low for 1-2 hours, making sure to add liquid (more barbecue sauce or chicken broth) as needed. Serve on toasted rolls or buns.

Put filling into a prepared pie crust (I like store-bought to save time). Add another pie crust on top. Cut slits to let it vent and bake in the oven according to pie crust instructions.

Tip: Many of these recipes can be adapted for a slow cooker. Adjust the cooking time as needed and make sure there is plenty of liquid. You can always add chicken broth to keep it moist without changing the flavor profile.

Rooster is a versatile meat and works in many different types of cooking. The thing to remember is to keep the meat moist and brine it ahead of time for the most tender dish.

If you have extra rooster meat, you can put it in the freezer raw for up to nine months.

For prepared dishes with rooster meat, you can follow similar steps. Remember to press as much air out of your freezer-safe container or bag to prevent freezer burn.

It’s also a good idea to put new freezer dishes in the back and move older ones to the front to encourage you to use them before they reach their expiration date.

Eating rooster meat is great for your health, taste buds, and farms. While not available in most supermarkets, you can talk to your local farmer or look for capon chickens to find rooster meat.

To keep it tasting its best, make sure to brine it before cooking and keep it moist with lots of liquid and herbs for the best flavor. You may just find your next favorite dish!

Katie is an experienced writer, who wrote for big magazines like The Spruce. She is also a mom of three (Sebastian, Lincoln, and Hannah). In her spare time, she likes to read, day hike, and explore hidden gems around her home in North Carolina. You can connect with Katie on Instagram @katiebwriter or her website, www.katiemelynnbegley.com.