Can You Eat Slimy Mushrooms? 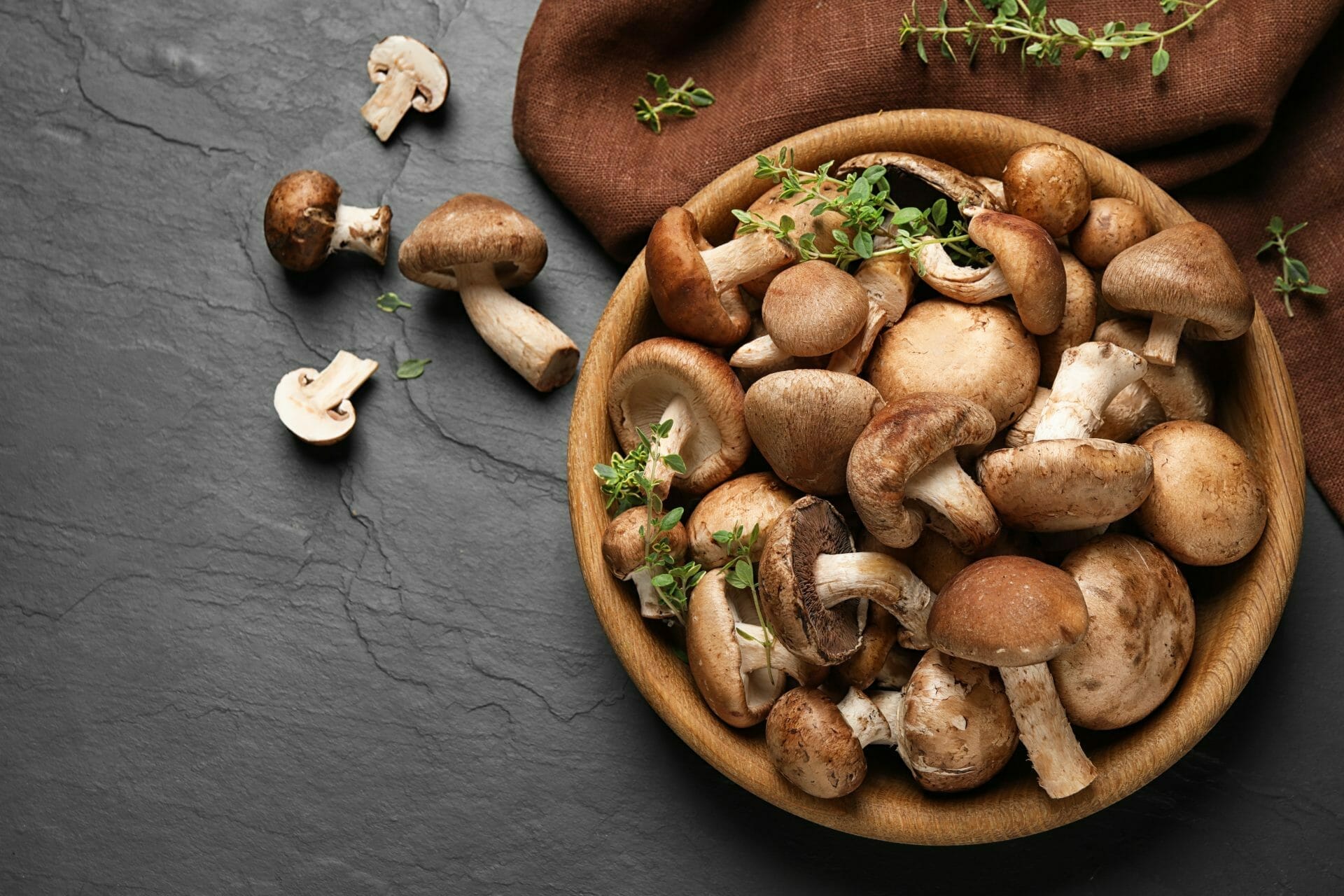 Mushrooms can be a versatile ingredient to have in your kitchen. You can throw them in your eggs, pasta, stir-fries, and soups without worrying about calories.

However, the fungi can get slimy after seven to ten days in storage. Considering how expensive this ‘meat’ can be, I don’t blame you if you want to eat slimy mushrooms.

Generally speaking, you shouldn’t eat slimy mushrooms. When mushrooms get slimy, it is the first sign that they are bad. It shows that bacteria or fungi are growing on the mushrooms causing them to decompose, lose taste, and make you sick.

Someone might have advised you to wash off the slime. That might not be the best idea, though.

Can You Eat Slimy Portobello Mushrooms?

Eating mushrooms in the hunting and gathering era was a bit of touch and go. You could get a full belly or die from a harmful fungus.

The ingestion of a harmful mushroom was probably the death of King Charles VI of the Holy Roman Empire.

However, not all mushrooms are harmful. Mushrooms can be a good source of vitamins and nutrients with low calories.

While you probably don’t want to go foraging for mushrooms, you can still enjoy a good meal from the store-bought ones.

The mushrooms sold in stores are cultivated, making them harmless and healthy to eat.

They can be sold loose or packaged in bunches. While the packaged ones come with expiration dates and storage advice, you can decide how you want to use your mushrooms.

So, you have bought some mushrooms for a while. You want to use them, and you notice a glistening slime.

For a minute, you’re not sure of what to do. The best course of action is to throw it out.

However, if the slime is the only sign of going bad noticed, you might still redeem your mushrooms.

But, if your mushrooms exhibit other signs of decomposition, you should avoid them completely. Bad mushrooms can make you sick.

Signs That Your Mushrooms are Bad

While slime is one of the first signs that your mushrooms are getting bad, there are other things you should watch for.

If your mushrooms have these signs along with being slimy, it has gone bad. It would be best if you did not eat it.

However, if it is only slime you find, you might have found that some people wash and cook slimy mushrooms. Does it make the mushrooms okay to eat? Let’s find out!

Can You Wash Slimy Mushrooms?

You can wash your slimy mushrooms. However, washing the slime does not necessarily make the mushrooms more edible.

The mold and bacteria already growing in the mushrooms would still be there. The taste and flavor of the fungus wouldn’t be restored.

Generally, mushrooms absorb water which changes their texture. So, if you want to wash your slimy mushrooms, you should do it quickly.

It will reduce the amount of water absorbed. You can also use a soft brush over them gently.

However, the best way to keep your mushrooms and prevent spoilage and slime is to keep them away from moisture.

A dry towel or cloth over your mushrooms can help you get rid of any dirt.

You don’t have to dip it in water to get it clean before storage. But, you can wash your mushrooms before cooking. However, don’t soak it in water.

Can You Eat Slimy Mushrooms If You Cook Them?

Cooking can help you get rid of several impurities in a meal. Cooked meals usually have less danger of causing infections than uncooked meals.

However, cooking might not help when it comes to slimy mushrooms.

Eating cooked mold from slimy mushrooms would only lead to nausea, stomach cramps, vomiting, and diarrhea.

Cooking in the case of slimy mushrooms does not make them okay. If you bought a packaged bunch and not all are slimy, you can select the ones without slime as long as they’re not exhibiting other signs of decomposition.

Though it might be hard to let go of your slimy mushrooms, your health is way more important.

Mushrooms can be expensive, but treating a sickness can cost you more. If you’re in doubt about how good it is, err on caution and get rid of the mushrooms.

Is It Okay to Eat Slightly Slimy Mushrooms?

Mushrooms can last for up to two weeks if stored right.

Though most of the time, mushrooms can start to get slightly slimy at ten days. At this point, you want to use it before it goes completely bad.

It is possible to use slightly slimy mushrooms. You can sauté it in oil, cook it, or dry it in an air fryer.

Mushrooms are mostly composed of water and get slimy as the cell walls break down.

If the decomposition has not gone far, you might still get some use out of the mushrooms.

There is no hard and fast rule about when you can stop eating your mushrooms. However, there are signs you can watch for.

The decomposition is way more than slight if the mushroom has a shriveled and dark stem or black inside.

If the mushroom smells weird, you should throw it out. You don’t want to try to rescue it if there is mold.

The ball is in your court. But you shouldn’t forget that the results might not be palatable if the mushrooms are bad.

You also might not enjoy mushrooms that have started to go slimy. The texture, taste, and flavor would not match fresh mushrooms.

What Happens If You Eat Slimy Mushrooms?

When you eat slimy mushrooms, there is a possibility that you will get sick. It could be something slight like nausea, but it could also be fatal.

Some of the symptoms you might feel from eating slimy mushrooms include:

Old mushrooms that have gotten bad can cause e. coli, salmonella, and botulism. Within 20 minutes to 4 hours, you would know if you would get sick from the mushrooms.

Ensure you contact your doctor if you get sick. Mushroom poisoning can be dangerous.

What Can I Do with Old Mushrooms?

We understand deciding not to take the risk on slimy mushrooms. You don’t want to end up in the hospital after a simple meal.

However, your mushrooms don’t have to go to a total waste when they get slimy.

You can add the old mushrooms to the compost for your home garden. The mushrooms will make a good addition since it serves as a good source of potassium,  phosphorus, and copper.

Adding your old mushrooms to the compost gives your plants an extra boost of nutrients.

Your plants can grow faster and better with the addition of mushrooms to your compost.

However, it can still be really painful when your mushrooms go bad. While you can still find a use for them, that’s not your purpose for buying the mushrooms.

How to Store Your Mushrooms?

Here are some of the ways to store your mushrooms:

Without proper storage, your mushrooms are not likely going to last. It would help to track how long your mushrooms were bought and whether they have started to go bad.

How Long Do Mushrooms Last?

The length of time to preserve your mushrooms depends on the method of storage and other conditions.

Keeping your mushrooms at room temperature might not last for more than two to three days.

You can also slice up the mushrooms before storing them. But, sliced mushrooms would only last 5-7 days in a fridge.

Cooked mushrooms would also last for 7-10 days. If you want a longer storage time, the best option is to freeze your mushrooms.

However, the moisture content of mushrooms can make freezing hard.

You would have to cook it and then freeze it. Mushrooms can last for 9-12 months in a freezer.

Note that you wouldn’t get the same texture, flavor, and nutrients from frozen mushrooms.

However you decide to store your mushrooms, don’t forget to watch them. Once they start getting slimy, you know that the end is near.

Slime on mushrooms is a sign that they are going bad. Coupled with other signs, you should throw out the mushrooms immediately.

However, you might still salvage your slimy mushrooms in the early stages. But, be careful not to eat bad mushrooms as they can make you sick.