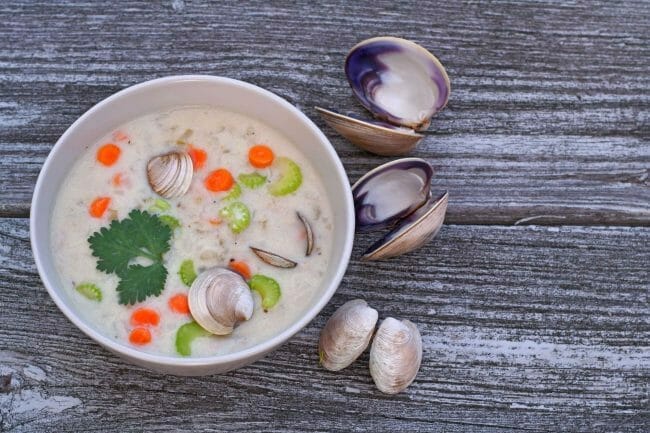 There’s nothing better than a cup of steaming clam chowder on a chilly day. But say you have some leftover chowder, and you’d rather save it for later.

Or maybe you want to plan ahead and prep extra batches for an easy dinner. Either way, you are probably wondering, can you freeze clam chowder?

In short, yes, you can freeze clam chowder. Both homemade and store-bought varieties of clam chowder can store in the freezer for up to four months. However, when you freeze clam chowder, there’s a risk that the heavy cream will curdle or the vegetables will get mushy.

If you choose to freeze your clam chowder for longevity, it’s important to note that it may not have the optimal consistency or flavor once you thaw the chowder.

While freezing clam chowder does allow you to keep it longer, the ingredients will break down in the freezer, and the longer the chowder remains frozen, the more the chowder’s texture and flavor will suffer.

Before freezing your chowder, keep in mind that several ingredients of a class chowder recipe don’t freeze well. These ingredients cause frozen chowder to lose its optimal flavor and consistency.

Your chowder will contain either heavy cream or milk as its base, depending on the recipe. Both of these dairy ingredients can curdle or split in the freezer. When freezing milk or cream, you’ll notice that the fats separate from the water, resulting in a cloudy or curdled appearance.

Unfortunately, there is not really a way to avoid this separation. The separation of the fats and water contributes in part to why clam chowder will lose some of its texture as the ingredients unbind. Additionally, dairy ingredients, including butter, will lose their flavor after freezing.

Vegetables have a high water content, and usually, you can freeze them just fine. However, some trouble can pop up after you have cooked the vegetables and saturated them in soup. Cooked vegetables will grow mushy and, in some cases, squishy after a round of freezing and defrosting.

Unfortunately, you can’t avoid this textural issue unless you omit vegetables from the soup until you are ready to defrost and heat it up for dinner.

You probably wouldn’t think that the fresh herbs would cause problems when frozen, but they can. Many recipes for clam chowder call for rosemary, thyme, and other leafy herbs.

While these plants provide a delicious addition to fresh chowder, when frozen, they can become acidic and bitter, creating a sour flavor in the chowder when you defrost the soup.

Now that you know all the challenges that can come from freezing chowder, you can start taking steps to freeze your chowder. Homemade chowder has a bit more leeway for freezing than a store-bought option. However, you’ll want to keep a few important steps in mind to preserve your chowder in the best fashion possible.

As previously mentioned, chowder ingredients like celery, onions, and carrots don’t freeze the best. But you can prepare your homemade chowder. If you plan to eat some of your chowder and freeze the other half, take the time to split the batch before cooking the vegetables.

If you have made a fresh batch of chowder and find yourself with enough leftovers to freeze some, consider removing the vegetables before freezing the chowder. You can use a strainer to remove vegetables from chowder.

After removing the vegetables, you can eat them or use them in another meal for the week – the cooked vegetables can last for up to three days in the fridge. Just remember that you’ll just need to add some new vegetables when you defrost the chowder.

Before freezing your chowder, you’ll want to make sure it’s relatively cool to the touch. Split up your chowder into smaller containers to speed up the cooling process. Freezing chowder that has completely cooled will prevent condensation from compromising the chowder’s consistency as it freezes.

If you have heated up a can of store-bought chowder for dinner and find yourself with leftovers, you can freeze the chowder. However, consider straining any vegetables in the broth and adding in your own vegetables when defrosting the soup to ensure better long-term consistency.

Freezing Straight From The Can

Maybe you meant to heat up the chowder and had to change your plans, but the can is open on the counter. Don’t worry; you can freeze store-bought chowder straight from the can. You’ll want to pour the chowder into a freezer-safe container since metal soup cans aren’t freezer-safe.

Never freeze chowder in a metal container. Metal contracts when subjected to extreme cold, and the container can crack or explode in the freezer if enough pressure develops from the temperature change.

Watch Out For Consistency Problems

Just prepare yourself for a possibly weird-textured chowder when you defrost it.

A Tip For Store-bought: Chowder: Do Not Add Ingredients Before Freezing

If you like to add ingredients to your store-bought chowder to add flavor or authenticity, don’t do it until you’re ready to cook the chowder for dinner. Adding your extra seasoning, veggies, or clams after defrosting the soup can help improve the flavor and texture of previously frozen chowder.

Never defrost chowder in the microwave, as this can cause problems with the dairy ingredients and contribute to mushy, grainy textures in the chowder. If you’re ready to pull the chowder out of the freezer to enjoy for dinner, two methods work best.

Plan ahead if you know when you want to defrost chowder for dinner. Place the chowder in the fridge to defrost overnight. The refrigerator method prevents bacteria from growing in the chowder as it defrosts and helps avoid any abrupt changes to its consistency.

It usually takes about twenty-four hours for clam chowder to defrost in the fridge. If you need it defrosted sooner, you’ll want to do the next method.

It’s essential to reheat your clam chowder to a safe temperature before consuming it. The USDA notes that reheating chowder to at least 165-degrees Fahrenheit or to boiling will kill off any bacteria hiding in the soup.

To help evenly reheat the soup, stir the chowder as it reheats. Then, bring the chowder to a boil while stirring.

Note that you should never refreeze a reheated chowder. Doing so can introduce harmful bacteria into the chowder and reduce the texture to a grainy, gross mess.

While you reheat your clam chowder, you may notice an extremely fishy or ammonia-like smell. If you do, throw the chowder out. When chowder begins to smell overly fishy or sour, the soup has likely gone rancid and can cause food poisoning when consumed.

Storing your chowder correctly in the freezer will prevent bacterial growth, freezer burn, and other problems with the chowder. Follow some of these tips to preserve your chowder:

The faster your chowder cools down, the less risk of it developing dangerous bacteria it has. To quickly cool your bacteria, place it in a basin of cold water. Then, stir the soup as you keep cold water running around the container; stirring helps the soup to cool evenly.

Store chowder in smaller portions. That way, you can thaw and reheat only what you need for an evening, instead of reheating a large batch and having to throw extras away.

Label your chowder container the day you put it in the freezer. Frozen clam chowder will deteriorate over time. The best flavor and texture will stick around for about a month. If the chowder is more than four months old, throw it out.

When you store your chowder, remember to do so while leaving room for expansion. Liquids expand when they freeze, and overfilling your container can result in chowder overflowing into the freezer and creating a huge mess.

If you reheat chowder and discover the flavor or texture to be lacking, you can improve it by doing some of the following:

If your dairy products have split or curdled, you can add more cream or milk to your chowder while reheating to improve the texture. Start by adding a few tablespoons to a ¼ cup and see how the texture improves from there.

If you find your chowder smelling or tasting bland after freezing, add some fresh seasoning like salt, pepper, or herbs to improve the flavor.

If you removed the vegetables in the chowder before freezing, you’d want to add some fresh vegetables to the mix. Adding fresh onions or potatoes to the mix can improve the flavor and texture of the chowder, too.

To speed up the vegetables’ cooking time, blanch the vegetables in boiling water for about three to five minutes before adding to the reheating chowder.

If you’ve defrosted your clam chowder and find yourself with leftovers, don’t refreeze it. Instead, you can store it in the fridge for up to five days. You can find more tips on storing clam chowder at room temperature and in the refrigerator here.

Freezing clam chowder can provide a safe, effective way to keep a delicious dinner on hand for when you’re craving a hot soup. Keep in mind that frozen chowder won’t have the same consistency as fresh chowder. Additionally, remember to reheat chowder to a boil to prevent any bacterial illness and help reconstitute the soup’s dairy products. Enjoy!