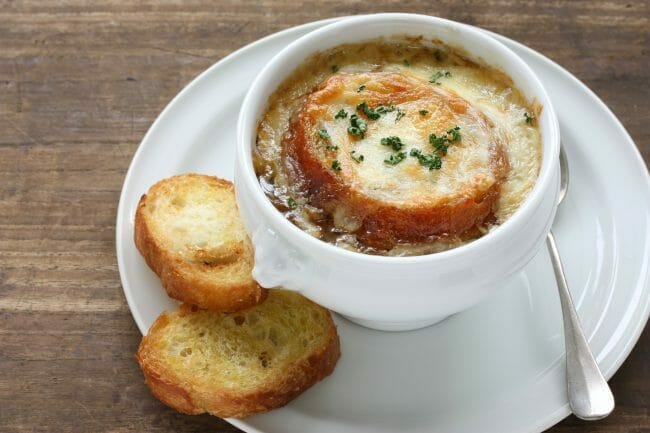 French onion soup is a rich and delicious broth with onion that is served immediately after being topped with a large toasted piece of bread and cheese and broiled until toasty and melty.

It is simple to make and warms you all the way through on a cold, blustery day.

Since it is so easy, you might make it by the gallon, but then you will need to deal with the leftover soup so that you can eat it later.

You can freeze homemade French onion soup before you add the crouton and cheese for up to 3 months. Make the rich onion broth and let it cool. Then freeze it into the portion sizes you plan to use.

You can freeze single portions in zip-top bags and quickly heat up a delicious toasty lunch. Or freeze a large container of the broth, and you will be ready to have a soup course for a dinner party in only about 20 minutes.

Continue reading for tips on how to freeze french onion soup with the best results, how to reheat it easily, and recipe variations so you can find your favorite version.

After making the French onion soup, pour servings into individual stoneware or ceramic bowls, which you laid out on a baking sheet.

Place a thick slice of toasted bread into each bowl and top with a piece of cheese. Place the whole tray in the oven and broil until the cheese melts.

You shouldn’t try to freeze french onion soup that already has the crouton and cheese added.

The bread will disintegrate in the liquid. When you try to reheat it, the texture of the bread will be unpleasant.

You can thaw just one or two servings just enough to put them into each bowl before popping them in the oven.

After making the soup, allow it to cool to room temperature before preparing to freeze it.

For individual servings, use zip-top freezer bags. Label the bags before you add the soup.

Then, pour in less soup than the individual bowls will hold. Remember that you will be adding a sizeable toasty slice of bread to the soup, so you need room to displace some of the soup. For example, if your bowl holds 10 ounces, pour 7-8 ounces into the zip-top bag.

Be sure to seal the bags tightly and then lay them flat on a baking sheet and place them in the freezer.

This will make the soup freeze in a flat, easily stackable, and storable format. Let the bags freeze for 4-5 hours; then, you can move them into another container or to your deep freeze for up to 3 months.

Perhaps you are planning a party, and you want to make the soup in advance and freeze it.

You can make the broth and then freeze a whole batch of French onion soup at once. Let the soup cool to room temperature after cooking it.

Store the soup in a freezer-safe bowl. You will want to use a bowl that leaves only a little air space for the soup to expand as it freezes, but not so much that it can be freezer burned.

Another option is to freeze larger amounts of soup in gallon-sized freezer bags. Label the bags before pouring in the soup.

Then seal tightly and lay the bags on a baking sheet in the freezer. After 6-7 hours, the soup should be mostly frozen so you can move it to the deep freeze until you are ready to use it.

It is not a good idea to refreeze soup that has been previously frozen. If you are concerned with food waste, freeze your soup in individual portions to reduce the possibility of having leftovers.

The best way to defrost your French onion soup is to place the frozen soup in the refrigerator overnight or in the morning that you plan to use it.

If your soup is frozen in bags, place the bags upright in a bowl to prevent any possible spills.

A quicker method for defrosting is to place the bags or container of frozen soup in a larger bowl of cool water. The cool water method will help thaw the soup more quickly.

Any time you freeze and reheat soup, you may need to add a bit of liquid to it for the best quality. Keep a little beef broth on hand to add to your soup if you lose some liquid in the freezing and thawing process.

Preparing Multiple Servings In the Oven And Broiler

If you are hosting dinner for more than just your immediate family, heating multiple servings of French onion soup in the oven and then under the broiler makes the soup course easy to manage.

This soup is popular and appealing to so many people because it is simple, yet rich and flavorful.

Start by thawing your soup in the refrigerator. Next, arrange the individual crocks on a baking sheet, one for each person at the dinner.

Fill each one almost full, leaving enough room for the crouton. Cover the whole baking sheet with plastic wrap and place it in the refrigerator.

When you are ready, preheat the oven to 350. Remove the plastic from the tray and place it in the oven. Bake for 20 minutes to heat the soup.

Arrange your thick slices of french bread or Italian bread cut to fit the bowls on another baking sheet. When 10 minutes remain, add them to the oven as well.

Remove everything from the oven and switch it to broil. Place one piece of toast in each bowl and cover it with a slice of provolone cheese.

Return the soup bowl tray to the oven and broil for approximately 5 minutes, or until the cheese is golden bubbly.

Preparing French Onion Soup On The Stovetop And The Broiler

If you need to heat the soup more quickly, you can put the soup into a pot or saucepan on the stovetop as soon as you can get it out of the freezer bag.

While the soup is heating, toast thick slices of French or Italian bread on a baking sheet. When the bread is toasty, remove it from the oven and switch the oven to broil.

Arrange the ramekins on the baking sheet and fill them with soup. Add one piece of toast to each bowl and top with a slice of cheese.

Place the soup under the broiler for 3-5 minutes until the cheese is melted and golden.

French onion soup is a rich beef broth with caramelized onion. Everyone has their favorite twist on the recipe.

If you are new to the French onion soup game, start with the basics, and then add some of our suggested alternatives to find your favorite.

Begin by caramelizing the onions. Peel and thinly slice 4 pounds (about 8) medium onions.

Melt 3 tablespoons of butter over medium heat in a large heavy-bottomed stockpot. Add the onions and cook until they caramelize (about 30 minutes).

You will need to stir them every 3-5 minutes as they turn golden brown then to a darker brown.

If needed, you can add a liquid to prevent them from burning, like ½ cup of beef broth or red wine.

When the onions caramelize, add 4 cloves of minced garlic and sauté for 2 minutes. Then add 3 tablespoons of flour and continue stirring and cooking for one minute.

Deglaze the pan with ½ cup of wine or broth, scraping to remove any little bits of onion that may stick to the bottom.

Reduce heat and simmer for 10 minutes. Remove and discard the bay leaf.

Toast thick slices of bread so they will be ready to put into the soup. Next, place the individual oven-safe bowls on the baking sheet and set the oven to broil.

Fill each bowl with soup, place a slice of toasted bread in each one, and top with a slice of cheese. Broil for 3-5 minutes.

French onion soup is a simple recipe, which makes it extremely flexible. You can swap out just about any ingredient, except the onions!

Create a vegan or vegetarian version of French onion soup. Use vegetable broth and white wine instead of beef broth.

Then, you can use a dairy-free cheese instead of regular cheese for the top of the soup. These straightforward substitutions can make French onion soup adapt to anyone’s dietary needs.

Sweet yellow onions are ideal for this soup. The natural sugars in these onions make the caramelization process ideal.

However, if you prefer white onions for a little more robust flavor or red onions for less sweetness, they will also work in the soup.

While you must have both, it does not have to be beef broth. If you do not eat red meat, you can use chicken broth or vegetable broth instead.

Some recipes call for red wine, others for white wine, and others don’t mention wine at all. If you don’t drink wine, don’t include it, you can use water or broth instead.

If you do like the flavor of wine, choose a dry red or white for this soup.

What bread should you use? A Baguette is a natural choice for French onion soup. The thick crust will hold up to the soup, so it doesn’t become soggy as quickly as other kinds of bread.

However, you should use whatever you like as long as it is in thick toasty slices.

Another bread option is to make cheesy garlic bread as a separate dish entirely and serve it on the side instead of as a crouton in the bowl.

This is an excellent option if you don’t have oven-safe ramekins or don’t like the texture of the bread when it is in the soup.

Gruyere, Swiss, provolone, mozzarella, or gouda are all good choices for French onion soup. Choose your favorites and give them a try.

You can freeze French onion soup before you add the bread and cheese.

After the bread is added to the soup, it will become soggy and disintegrate in the freezer, making an unpleasant texture.

Freeze individual portions in zip-top bags for easy re-use without any food waste. You can keep the soup frozen for up to 3 months.

Defrost the soup by setting the bags in the refrigerator overnight or in a bowl of cool water for a few hours.

Reheat on the stovetop or in individual ramekins for 20 minutes in the oven before adding the crouton.