Can You Mix Peanut Oil and Vegetable Oil? 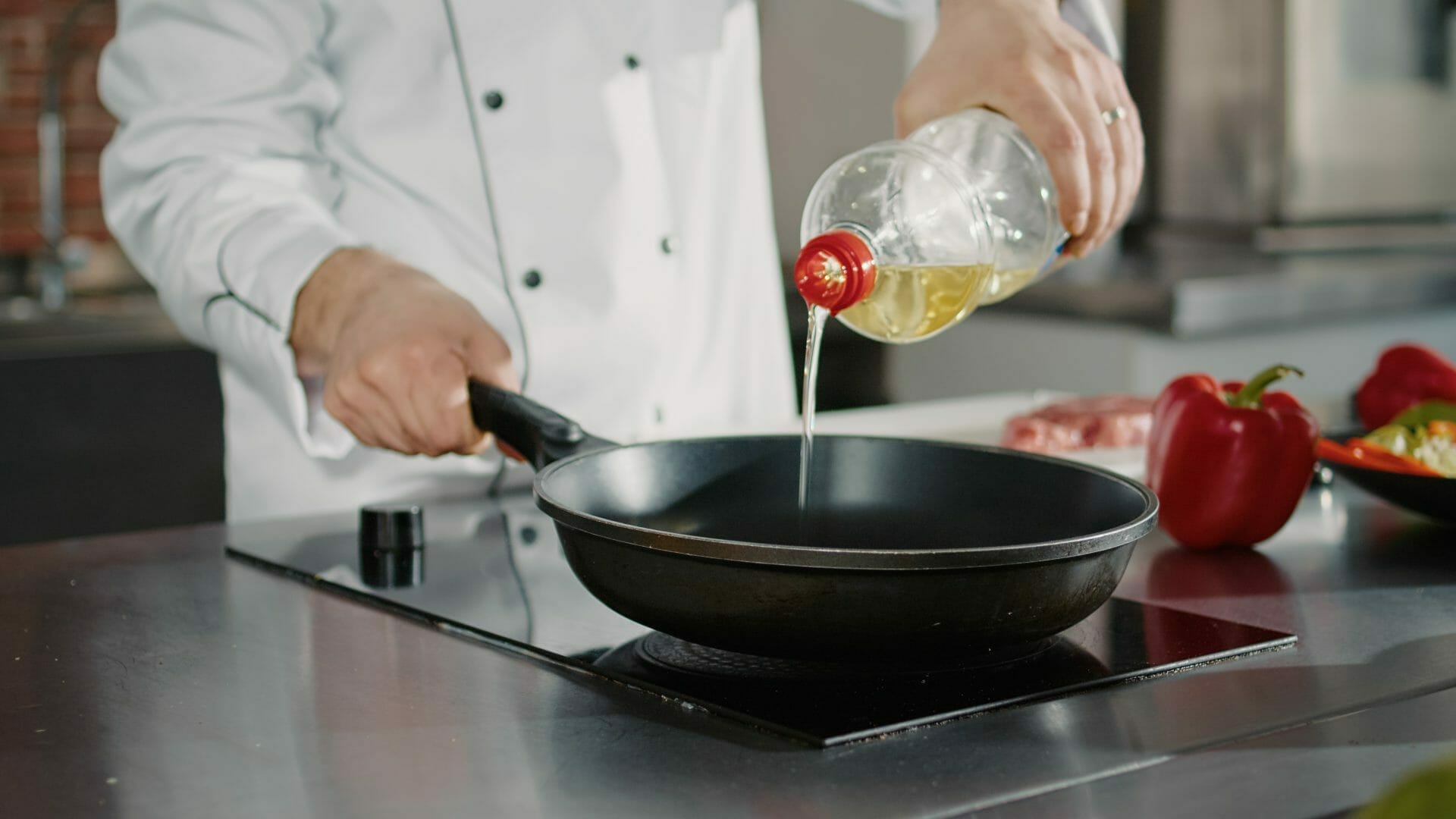 If you’re an avid home cook — you may have run into this oil predicament before.

You have two nearly empty bottles of peanut oil and vegetable oil and you’re wondering to yourself, “Can I just mix these together?”

When you’re mixing any two oils together, there are a few things to keep in mind to ensure success.

Peanut oil and vegetable oil are both popular choices for home cooks around the world as they are versatile and can be used in any number of cuisines.

They are also both good choices for frying as they handle high heat well.

Peanut oil and vegetable oil can be mixed together and are fairly compatible in their flavor profiles — which range from neutral to slightly nutty. Since they both have high enough smoke points, you can use the combined oil to safely deep fry your favorite foods.

Whenever you go to mix two oils together, you’ll want to take into consideration what their individual smoke points are in order to determine what the resulting smoke point will be. If you plan on frying with the oil mixture, this number will be key.

There is some fluctuation when it comes to vegetable oil as it typically consists of a blend of different oils as shown in the table below with their corresponding smoke points.

Once you’ve mixed both your peanut oil and vegetable oil together, you can safely assume that the resulting oil has a smoke point of at least 400°F.

This is the smoke point of the vegetable oil, the lowest number of the two.

Why Is the Smoke Point of Oil Important?

Oils with a low smoke point, such as flaxseed oil (225°F) would do very poorly if you attempted to fry with them.

For deep-frying, you’ll want to look for an oil with at least a smoke point of 375°F. It’s even better to stick around the 400°F range.
If you exceed the smoke point of your oils when you’re frying, then it can result in a breakdown of the oil that can destroy healthy nutrients and result in an unpleasant taste and aroma.

Can You Mix Peanut Oil and Vegetable Oil When Frying?

These two oils are popular choices when it comes to deep-frying, so it would make sense to try and combine the two.

However, you need to stay mindful of the two different smoke points.

With peanut oil and vegetable oil, you’ll be looking at a smoke point of closer to 400 degrees — as opposed to peanut oil’s 450 degrees.

However, 400°F is still high enough to deep fry with and you can proceed as planned.

As long as the two oils that you’re trying to mix have a high enough smoke point, you’re good to fry with them from a safety standpoint.

From a flavor profile standpoint, you may still need to consider if they’re complimentary.

Can You Mix Peanut Oil and Vegetable Oil to Fry a Turkey?

It’s an increasingly popular choice to deep fry a turkey on Thanksgiving Day. There’s less fuss involved when compared to the more traditional basted and baked turkey and you’re more likely to end up with a moist main dish.

If you want to pop your turkey into the deep fryer, you may find yourself needing to mix a couple of oils together in order to have enough.

After all, most deep-fried turkey recipes call for several gallons of oil!

Using peanut oil and vegetable oil to fry a turkey is a great way to infuse a bit of peanut oil’s nuttiness into your main course.

If you’re worried about the additional flavor it may be best to steer clear of the peanut oil.

How to Mix Peanut Oil and Vegetable Oil for Frying

Instead of just pouring both of your oils into a pot and bringing them up to temperature, it’s best to combine the oils separately and whisk them to ensure that they’re thoroughly mixed.

Oils may try to separate from each other, which can lead to them heating up at varying rates.

By taking the time to mix them completely until they’re emulsified, you’ll ensure a more even fry on your food.

Without mixing the two oils properly, you may find that there are some “hot” spots in your pot that make for uneven cooking.

You can also choose to combine the oils into a jar and secure the lid before shaking them together. This will ensure that they’re completely combined.

Can You Reuse Peanut Oil and Vegetable Oil to Fry With Again?

Peanut oil can be a bit more expensive than vegetable oil, so you may want to conserve the remaining oil and use it again.

To do so, you’ll want to thoroughly filter out any food particles from the oil.

Once the oil has been filtered, you can feel free to reuse it. There’s no hard and fast rule around how many times you can reuse oil in this way — though it’s best to throw it out once it darkens in color.

What Happens When You Mix Two Oils for Deep Frying?

When you use a mixture of two oils to deep fry with, you’ll need to take into consideration that the resulting smoke point will be that of the oil with the lowest smoke point.

Always make sure that the smoke point is at least 375°F before you attempt to deep fry something.

For instance, you can’t take a high heat oil and mix it with a low heat one and expect the resulting oil to be able to deep fry your turkey.

You’ll likely end up with a dangerous situation on your hands, with smoke everywhere.

Once you mix two oils together, such as peanut and vegetable oil, you can fry as normal.

You don’t need to add any extra time due to it being a mixture. Remove your food once it has been cooked through and it’s golden brown and crispy.

A common concern that people have when they mix two oils together is whether or not the flavor of their dish will be negatively affected.

Vegetable oil is considered a neutral oil, as it is flavorless and is suitable for a variety of cooked and baked dishes.

While peanut oil isn’t considered completely neutral — it also isn’t as strong as say, olive oil or avocado oil. Peanut oil has a light flavor but is fairly mild in taste.

When combining oils, especially for deep frying, it’s important to ensure that the flavors will be complementary to each other.

If the mixture is largely made up of vegetable oil with a small percentage of peanut oil, then you shouldn’t notice the flavor.

However, if your mixture is heavy on the peanut oil you should expect a bit of a nutty infusion to your final dish.

What Other Oils Can You Mix Together?

Many cooks have a variety of oils in their pantry cupboard. The usual suspects can include, olive oil, vegetable oil, canola oil, peanut oil, and avocado oil.

Depending on what your preferences are, you may find yourself needing to mix up a couple of leftover bottles.

Depending on what your goal is, you’ll need to ensure the smoking points are appropriate for frying.

Can You Mix Vegetable Oil and Canola Oil?

There are quite a few other oils that work well when mixed with vegetable oil. Canola oil is a great choice as vegetable oil oftentimes has a bit of canola oil already in it.

These are both plant-derived oils, so they mix well and their neutral flavor profile makes them ideal for frying and cooking.

Can You Mix Vegetable Oil and Avocado Oil?

Avocado oil can be on the pricier end of the oils, as it is produced in smaller quantities.

However, it’s an incredibly versatile oil and it possesses one of the highest smoke points of all of the plant-based oils at 520°F.

Mixing vegetable oil and avocado oil will leave you with a mixture that has a smoke point of 400°F.

Both oils are fairly neutral in taste and you would be able to deep fry with the combination.

Most people don’t choose avocado oil for deep frying, despite the high smoke point. It can be expensive to purchase the oil in the large quantities needed for frying — as opposed to the cheaper vegetable oil.

However, avocado oil is a heart-healthy oil and it may be linked to an array of benefits.

Can You Mix Soybean Oil and Canola Oil?

You would be safe to fry with this mixture of oils as the smoke point would be at least 400°F.

Soybean oil and canola oil are both inexpensive, which makes them ideal for frying. You’ll usually need a large amount of oil to fry, so you don’t want to use the pricer options.

What Oils Can You Mix With Peanut Oil?

Peanut oil can be safely combined with a number of other oils — such as vegetable, olive, canola, sunflower, safflower, and even avocado.

All of these combinations will have a high enough resulting smoke point to safely fry with.

Experimenting with different combinations will lead you to unique flavor profiles that you may find yourself enjoying.

A fried Asian recipe may do very well with a combination of peanut and olive oil, as those flavors complement the cuisine.

There are a wide variety of combinations of oils that will work well together — so long as their compatible in flavor.

If you plan on frying with your oil, the resulting smoke point will need to be in the range of 375°F to 400°F.

When you mix vegetable oil and peanut oil, be mindful of the nuttiness that the peanut oil may bring to your final dish.

The mixed oils will have a smoke point of 400°F, which is that of the vegetable oil.

Both vegetable oil and peanut oil are popular choices for many home cooks, as they work for a wide variety of dishes and cuisines.

If you plan on deep-frying a turkey for Thanksgiving, some people even enjoy the extra flavor profile that the peanut oil brings to the bird.