So, You Over Boiled Potatoes (A Quick Fix) 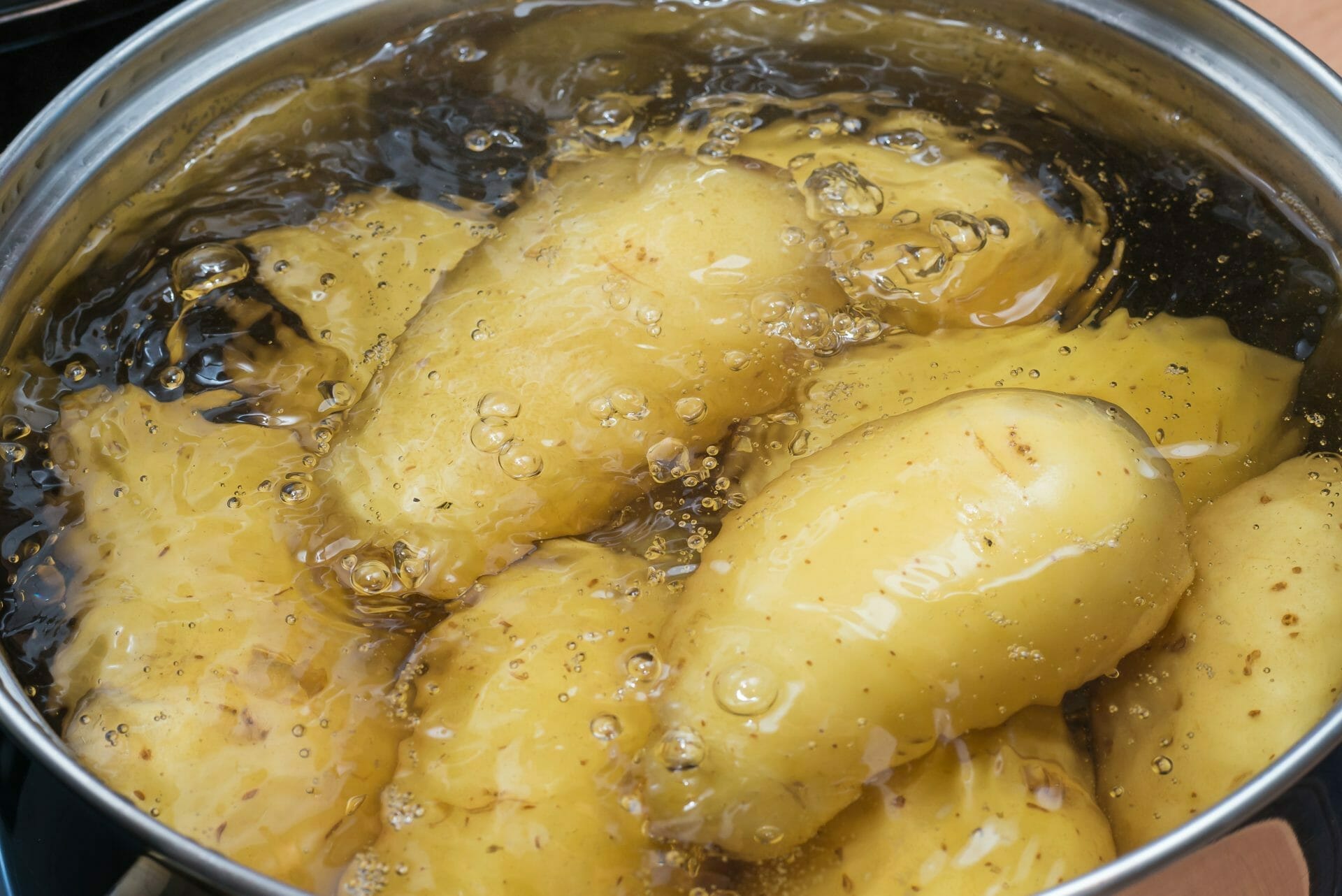 Potatoes are a hearty staple you can find in almost any kitchen. Since they’re such versatile vegetables, you can prepare them in hundreds of different ways.

For certain potato dishes, they come out much better if you boil them first. For example, to make perfect mashed potatoes, you have to boil potatoes in salted water for about 15 minutes.

But sometimes when you’re prepping dinner, it’s easy to lose track of time, and you might leave the potatoes in the water for too long.

Unfortunately, you can overboil potatoes. When you leave potatoes in boiling water for too long, they will absorb too much water. So then, when you cut or mash them, the water releases, and you are left with a soupy mess.

However, you can still eat overboiled potatoes. Keep reading to learn the different ways you can accidentally over boil potatoes and how to fix them.

Over Boil Potatoes for Mashed Potatoes

The good news is that it’s hard to over boil potatoes for mashed potatoes!

Because you need so much liquid for mashed potatoes, even if your potatoes end up being too liquidy, all you have to do is add less milk/half and half, or other wet ingredients.

Cook them on low heat to evaporate some of the water.

Once they are at the consistency you want them at, then remove them from the skillet, and you can continue making your dish!

Can You Over Boil Potatoes on the Stove

The stovetop is the most traditional way to over boil potatoes, and you can over boil them on the stove.

If you leave the potatoes in water for too long, they will absorb excess water and become a runny mess once you try to cook with them.

Use a timer to avoid over boiling potatoes. Bring a large pot of salted water to a boil and then add your potatoes.

If you have already cubed the potatoes, they should be done in about 15 minutes. However, if you are boiling whole potatoes, those will take longer, about 20-25 minutes.

Can You Over Boil Potatoes in the Microwave

However, with the microwave, you have a few added risks.

With the microwave, you’re not just worried about them getting too mushy. You also have to worry about drying them out.

If you leave your potatoes in the microwave for too long or don’t cover them up, you risk certain sections of the potato becoming dry and rough.

And if you are using water to microwave your potatoes, you risk them absorbing too much and being runny.

To boil potatoes properly in the microwave, first wash the potatoes thoroughly and puncture them several times with a fork.

Then, place the potatoes in a microwave-safe bowl and cover the bowl with plastic wrap.

Cook large potatoes for four minutes to start, then use the same knife test to check if they are done.

If you want to use water in the microwave with your potatoes, you can do that as well.

First, wash and dice your potatoes, then place them in a microwave-safe bowl with just enough water to cover the bottom of the bowl.

Cover them with a lid or cling-wrap and microwave the potatoes on high for three minutes. Check if they are done with the knife test.

Can You Over Boil Potatoes for Roasting

However, you are less likely to accidentally over boil potatoes before roasting them because you don’t want the potatoes to be fully cooked before they go in the oven.

To boil potatoes for roasting, you want to halve them and wash them. Bring a pot of salted water to a boil, then add the potatoes.

Cook them for ten minutes, then remove them. When checking for doneness, you do the same knife test.

However, you don’t want the center to be fully cooked, so you should be met with some resistance.

Can You Over Boil Potatoes in the Instant Pot

Since the Instant Pot is a timed cooking device, it’s near impossible to over boil potatoes in one.

You don’t have to worry about checking the stove or accidentally leaving them in for too long because the Instant Pot stops cooking after the amount of time you set.

It’s a hassle-free way to get perfect boiled potatoes every time.

To boil potatoes in your instant pot, quarter two pounds of potatoes. Throw them into the Instant Pot with a cup of water.

Select pressure cook and set the timer for three minutes. Once the timer goes off, wait for five minutes to natural release.

Your potatoes will then be ready to serve or to be used in another recipe.

Can You Over-Boil Potatoes in Milk

If you are making mashed potatoes, having a little extra milk in your recipe can give more flavor to your recipe. Also, it just means you have to add less dairy later.

If you don’t want the extra milk in your potatoes from over boiling them, just cook some of that milk off in a skillet over low heat until you get the consistency that you are looking for.

I love to make mashed potatoes with milk because if you save the milk you made the potatoes in, you get this lovely starchy milk that makes a great base for creamy soups.

Save the milk so you can make some extra-delicious potato soup the next day!

How to Fix Potatoes that Have Been Over Boiled

If you have overboiled your potatoes, you just need to use a skillet or pot to evaporate some of the excess water.

To fix over boiled potatoes, drain all the water first with a strainer. Place the potatoes back in the pot that you cooked them with.

Stir the potatoes while you do this so that the excess water comes out of them. You’ll know the potatoes are done once you drag a wooden spoon across the pot, and you can see a layer of potato left behind.

There are other methods you can try as well to fix your over boiled potatoes. If you want to not have to be constantly stirring, try throwing them in the oven at a low temperature (try 275°F).

Put the drier ones on top. Check on them every five minutes or so until they are dry enough for your recipe.

The other thing you can do to fix potatoes is to change the recipe that you are doing. For example, if you over boil potatoes for a roast, the potatoes will not be firm once they are done cooking in an oven.

Consider changing your side dish to mashed potatoes, which is a much more forgiving dish for overboiled potatoes.

What is the Optimal Temperature to Cook Potatoes

If you are boiling potatoes, you want the water temperature to be at 212°F. This is boiling and you’ll know your water is boiling when large bubbles are rising quickly from the bottom of the pot to the surface.

However, there are different options for when to throw your potatoes in. If you are making whole boiled potatoes, it’s recommended that you put the potatoes in cold water and let the water come to a boil with the potatoes inside.

You can put cubed potatoes in when the water is cold or wait until the water is boiled. Since they are smaller pieces, it doesn’t make as significant of a difference.

Something to be aware of, high-temperature cooking comes with a higher risk of acrylamide forming.

Check-in with your doctor if acrylamide is an issue for anyone in your family before boiling potatoes to serve to them.

If you want to reduce the risk of acrylamide in your potatoes, store your potatoes outside of the fridge and soak them in water for 30 minutes before cooking with them.

What to Make With Overboiled Potatoes

The good news is that if you overboil your potatoes, you can still eat them, and there are lots of different dishes you can make with them!

The easiest dish to make with overboiled potatoes is mashed potatoes. Because this dish is already liquidy, a little extra water won’t hurt anything.

Of course, you can also remove some of the water using the previously listed methods.

And if you’re not sure if the half and half that’s in the fridge from last week that you want to use for your mashed potatoes is still good, know that half and half lasts for 7-10 days typically.

You can also make a smashed potato salad with overboiled potatoes. This delicious dish is perfect for a picnic or your child’s lunch.

The recipe uses slightly mashed potatoes, and it’s okay if there is a little extra liquid.

Chop and combine all your dry ingredients, just add the mayo and vinegar a little bit at a time in the end until the salad is the consistency you’re looking for.

The smashed potato salad will taste a little better if you remove the extra liquid first out of your overboiled potatoes, but sometimes you just don’t have the time!

Another fun recipe for overboiled potatoes is fried mashed potato cakes. Kids will love these tasty treats, and it only requires a little bit more work than making mashed potatoes.

You toss some flour, egg, and salt with your mashed potatoes and then basically cook the batter like pancakes! It’s a fun way to reuse leftovers.

You can also use overboiled potatoes to make potato soup. Because potatoes are often the last thing you add to potato soup, you can just throw in your overbaked potatoes once the rest of the soup is done cooking.

And really, you can use an overboiled potato for most dishes. All you have to do is follow the steps to remove some of the excess water, then they are ready to go.

You can over boil potatoes, and you know if your potatoes are runny once you mash or cut into them.

But over boiling potatoes is an easy problem to solve. Simply drain the water and throw them back on the stove or into a low-temp oven.

If you want to avoid over boiling your potatoes, set a timer and keep an eye on them, or use an Instant Pot, so you don’t have to worry about them over boiling.

Potatoes are forgivable foods, so even if you over boil them for roasting, it’s easy to switch gears and use them for different dishes, like mashed potatoes.