Freezing Rum (How Long Will It Last?) 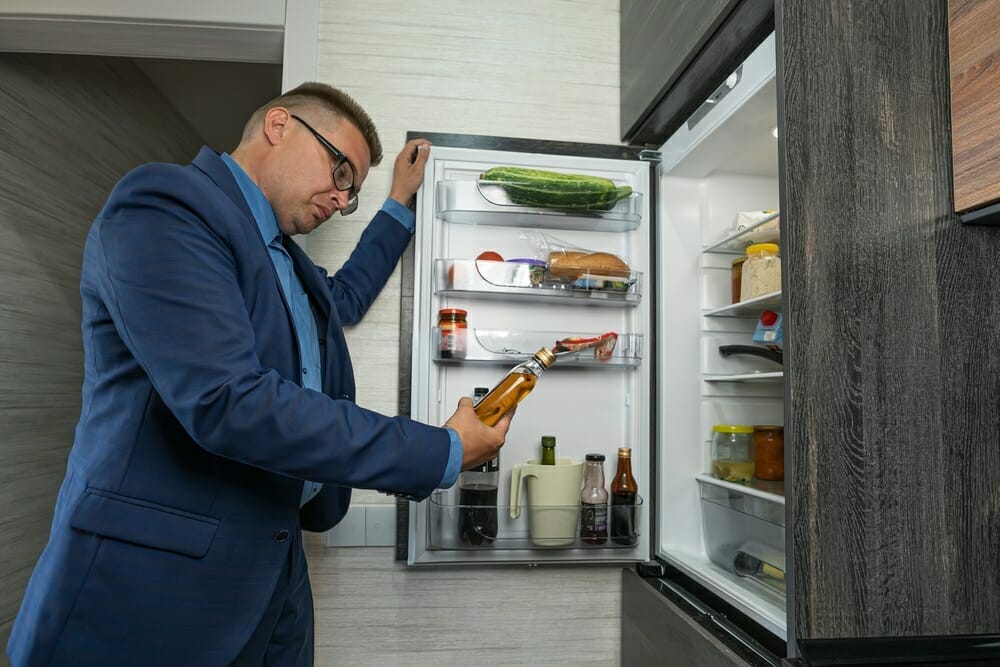 Rum is a great drink in any season. It can make a great addition to a refreshing beverage in the summer. Or you can drink spiced rum to warm yourself up during the winter.

Part of ensuring that you enjoy your rum is knowing how to store it. Using the best storage practices will help the alcohol keep its taste for longer.

One question that you might have about this is whether you should be putting your rum in the freezer.

It’s usually okay to put rum in a freezer. Pure rum won’t freeze until it reaches -17 degrees Fahrenheit. Most home freezers are kept at zero Fahrenheit. So placing your rum in the freezer will keep it chilled without completely freezing the liquid.

Is It Okay To Put Rum In The Fridge?

It’s perfectly fine to keep your rum in the fridge. Doing so is one way that you can keep it cold. It may be a better option if you don’t like your rum as cold as it gets in the freezer.

That’s because they have high alcohol content. This preserves the integrity of the liquid, eliminating the need to keep it chilled.

The general rule of thumb is that you should put drinks with 15% of alcohol or less in the refrigerator.

This includes drinks like wine and beer. These beverages don’t have enough alcohol in them to preserve them when left unchilled after being opened.

How Long Can Rum Stay In The Freezer?

If the bottle or container of rum is properly sealed, it will stay fresh until the ‘best by’ date on the bottle, usually around six months after opening.

How Long Does Rum Last When Opened?

Once you have opened a bottle of rum, the quality does begin to deteriorate, despite most people’s belief.

It is recommended that rum be consumed within a couple of months of opening in order to enjoy the taste and drinkability.

While some alcohol does get stronger with age, that does not mean it stays fresh.

Does Freezing Alcohol Ruin It?

This depends on the type of alcohol that you’re talking about. Most spirits won’t freeze in a home freezer. This is a list that includes:

You can place any of those in the freezer for as long as you want. They’re put in containers that are okay to handle the cold temperatures.

Nothing will happen to the drink besides it getting chilled when you place it in a freezer.

But you wouldn’t want to freeze alcoholic beverages with lower alcohol content. For example, beer and wine should only be placed in the freezer for a limited time.

You can use the freezer to chill these drinks before consuming them. But don’t forget to take them out. Otherwise, the liquid could freeze solid.

Should Rum Be Chilled?

Rum can be served in several different ways. You don’t have to keep it chilled if you don’t want a cold drink.

In fact, most alcohols can be served at a variety of temperatures depending on your personal preference.

That being said, most people do serve rum chilled. The flavor and scent of rum are best between 55 and 62 degrees Fahrenheit.

So you should try to serve it at that temperature if you want to optimize the taste of your drinks.

There are also some popular rum drinks that are served with warm rum. So the way you serve rum could depend on the season you’re in and the drink you want.

There’s ultimately no right or wrong way to consume rum. It just depends on what you like best.

Malibu rum will not freeze in a typical home freezer. It may, however, turn icy. Depending on the quality of the rum, it may even turn to syrup rather than freezing.

Unfortunately, this happens to many alcohols when put in the freezer.

Captain Morgan is one of the most popular brands of rum. If you have a bottle, you might be wondering if you can freeze it.

The answer is yes, you should almost always be able to put Captain Morgan in your home freezer.

The only issue would be if your freezer is much colder than normal. The magic number is -17 degrees Fahrenheit.

If your freezer is colder than this, then your Captain Morgan rum will freeze in it.

This means you probably don’t have to worry about the bottle shattering in your freezer.

That only happens when the liquid gets frozen and expands. This is what places pressure on the bottle and causes it to explode. Since your rum won’t be frozen, this won’t occur.

Can I Put Bicardi In The Freezer?

This is a question that comes down to personal preference. You absolutely can store Bicardi in the freezer.

It has a high enough alcohol content to make it okay to do so. But you’re certainly under no obligation to put your Bicardi in the freezer.

In fact, Bacardi itself recommends that you don’t put its beverages in the refrigerator or the freezer.

The company says that its drinks taste best if you serve the rum at room temperature. Then you can add ice to the drink if you want it to be cooler.

It’s worth mentioning that Bicardi has a slightly lower alcohol content than some other rums do.

Putting ice into a cup with Bicardi may weaken the taste more than it would for other types of alcohol.

So what do you do if you want your Bicardi cold? You could freeze it or refrigerate it. But you could also try using whiskey stones. These will keep your drink cold without interfering with its taste.

What Alcohol Should Be Kept In The Freezer?

There’s no type of alcohol that has to be kept in the freezer. Virtually every type of spirit can be served without chilling it in the freezer first. It’s really all a matter of personal preference.

If you want a colder drink, toss the alcohol into the freezer before consuming it. But if you don’t care about that, you can go ahead and drink the spirit at room temperature.

You can even go back and forth between both strategies depending on your preferences from day to day.

However, there are some liquors that will taste better when served chill. Gin and vodka are two of the most common examples of this.

Does Rum Improve With Age?

Certain types of hard alcohol do get better with age. But only when they are left in the barrels they’re held in before bottling. Whiskey is a great example of this.

It’s typically stored in wooden barrels. These barrels break down the rougher flavors in the alcohol.

They leave it with a smoother taste. So the longer you leave whiskey in a barrel, the better it usually tastes.

Rum is also aged in this way sometimes. But practices vary from manufacturer to manufacturer. The key thing to know is that rum and other alcohols stop aging once they’re bottled.

So there isn’t really any point in saving a bottle of rum for a long time. It will still taste the same once you open it.

How Do You Drink Expensive Rum?

Investing in an expensive bottle of alcohol is a great way to celebrate a special occasion.

Maybe you’ve recently done that by purchasing an expensive bottle of rum. You might be curious about the best way to drink it so that you get your money’s worth.

There are two strategies here that are worth considering. The first is to just drink the rum neat.

Put a bit in a small glass and let your hands warm it slightly while you drink. This will allow you to experience the expensive rum in its purest form.

Or you can drink an expensive rum just like you’d drink a good whiskey. You could place a splash of water or ice in a cup.

Then add the rum to it. You could even try adding a slice of lime to the glass to help bring out the rum’s flavor.

What Is The Best Mix With Rum?

There are lots of different things that you can mix with rum. The things that are best will vary based on your personal taste preferences.

For example, lemons and limes make great additions to rum. Their taste compliments the flavors of rum quite nicely.

You could also add tropical juices like pineapple or coconut water to rum. Or, maybe you prefer something sparkly like club soda, ginger beer, or tonic water.

Of course, coca-cola and rum is a classic flavor combination that still is worth trying today.

Is Rum Good For Health?

Most people drink rum for its taste. But doing so in moderation could actually be healthy for you.

Rum can give you a healthy and strong heart. It’s also a blood thinner, which could help to combat artery blockages and heart disease.

Just keep in mind that rum is still alcohol. As such, it should not be consumed in excessive quantities. It’s best to stick with a glass or two a week.

Can I Drink Rum Every Day?

Excessive alcohol consumption is risky. It can lead to liver disease and other serious health concerns. But having a glass of rum every day isn’t necessarily bad on its own.

It says that adult men should drink no more than 12 alcoholic beverages. The maximum for women is set at 6 drinks per week.