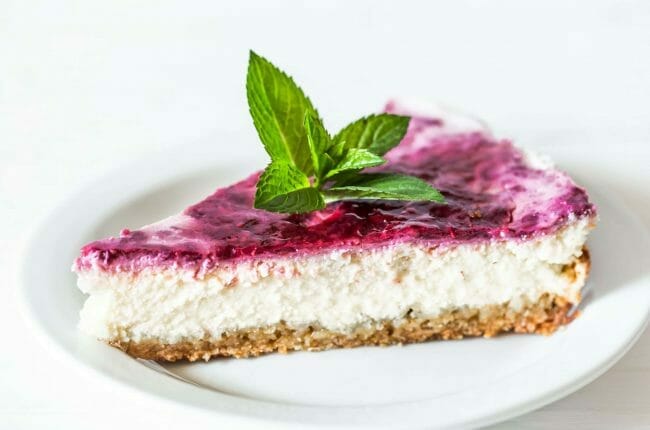 Whoever decided that cheese belonged in a cake was a genius. Cheesecake is a favorite dessert in my family.

We aren’t particular, either. Store-bought and homemade cheesecake are equally delicious in our eyes.

But there have been times that we pull a cheesecake out of the freezer only end up having leftovers, despite our love of cheesecake.

If that’s happened to you, you’ve probably wondered, can you refreeze a cheesecake?

You can also usually freeze homemade or fresh cheesecake, but only if you put it in the freezer within two hours of the cheesecake sitting at room temperature. However, you should not refreeze a cheesecake once two months have passed since its original date of freezing. After about two months, frozen cheesecake loses its consistency and degrades in quality and flavor.

It’s not uncommon for people to freeze and refreeze cheesecake two or three times, especially if they aren’t eating more than a few slices at a time.

The USDA has pretty straightforward rules regarding when someone can safely refreeze a cheesecake.

They note that if the cheesecake still has ice crystals on its surface and remains cold to the touch, you can safely refreeze it.

However, the USDA also notes that you should not refreeze fully thawed cheesecake that has sat out at room temperature for more than two hours. They recommend discarding it instead to avoid foodborne illness.

Steps To Refreeze A Store-bought Cheesecake

If you plan to refreeze a cheesecake, you’ll want to do it properly to ensure it keeps its quality and flavor as long as possible.

1. Store The Cheesecake On A Firm Surface

When storing cheesecake, you’ll want to keep it on a piece of cardboard or freezer-safe plate.

Cheesecakes set up well in the freezer, but if they get squished or jostled too much in the freezer, they can break into smaller chunks. A cardboard cake base or large plate can help prevent breakage.

2. Wrap It In Plastic Wrap

Cheesecake degrades in the freezer faster if air makes contact with the cake. Wrapping the cheesecake in plastic wrap will help prevent exposure.

After wrapping cheesecake in plastic wrap, you’ll want to follow up with tin foil. The foil helps prevent airflow from getting to the cake, and it also can help prevent freezer burn.

4. Place It In A Freezer Container

While a freezer-safe container may seem like overkill, it’s not. The USDA notes that dairy products don’t freeze well, so it’s best to give it the greatest storage environment possible for freezing.

For example, a Tupperware container will keep the cake lasting longer in the freezer and prevent it from getting banged around too much by your other frozen goods.

5. Freeze For Up To Two Months Total

You should not keep cheesecake for more than two months from its first date of freezing to its last. After two months, cheesecake starts losing its flavor, consistency, and texture.

Homemade cheesecake comes with a freshness and texture that a lot of store-bought variations can’t beat.

However, homemade cheesecake usually doesn’t last as long as store-bought because it doesn’t contain preservatives.

In general, you need to keep the homemade cheesecake in the fridge or freezer, the same as you would a store-bought cheesecake.

The USDA does not recommend keeping any dairy-based products out at room temperature for more than two hours, regardless of if they are homemade or store-bought products.

If you like to make cheesecake in bulk at home, you can definitely freeze some to save for later.

The same rules apply in regards to keeping homemade cheesecake in the freezer; don’t keep it in there for more than two months total.

Step One: Cool The Cheesecake Completely

Before you can freeze the homemade cheesecake, you need to ensure it has cooled completely before chilling it in the fridge or placing it in the freezer.

Not cooling the cheesecake first will cause condensation to develop on the cake, leading to a soggy, mushy cheesecake.

You’ll want to use plastic wrap throughout the duration of your freezing and refreezing of homemade cheesecake.

The better you wrap the cheesecake, the better it will taste on each subsequent defrost.

When you wrap the cheesecake, ensure that you seal the plastic wrap well and flatten out any air bubbles. This process will help the cheesecake survive in the freezer longer.

Similar to refreezing cheesecake, the initial freezing of homemade cheesecake should follow plastic wrap with a layer of tin foil to prevent any freezer burn.

Step Four: Place It In A Freezer-safe Storage Container

Keeping your cheesecake in a freezer-safe container will protect it from damage in the freezer.

Homemade cheesecakes are usually more delicate than storebought, so they need the extra protection of the container walls.

Step Five: Freeze For Up To Two Months Total

After you have frozen and refrozen homemade cheesecake for a period of over two months, you’ll want to throw any remainder out to avoid food-borne illnesses or risk eating a slimy cheesecake.

Always push out any air bubbles in the plastic wrap and foil, and never leave the cheesecake out on the counter for more than two hours, or you’ll have to toss it in the trash.

You can freeze Cheesecake Factory cheesecakes or cheesecakes from any other restaurant if you can guarantee that they haven’t sat out at room temperature for more than two hours.

However, you need to calculate how long the cheesecake sat out at your table, the drive home, and the storage conditions at the restaurant to determine its safety.

Keep in mind that your cheesecake may have sat in a hot kitchen for a few minutes, or it could have been in the fridge for several days; not all restaurants make cheesecake fresh, after all.

Because the storage history of the cake is likely a mystery, it’s generally best not to freeze restaurant cheesecake leftovers at your house.

However, if you buy a Cheesecake Factory product from a grocery store’s frozen aisle, you can definitely refreeze those products by following the refreezing process listed previously in this article.

But, again, just don’t let the cheesecake fully defrost or sit at room temperature for more than two hours.

You can typically refreeze a partially thawed cheesecake using the same methods previously mentioned in this article.

You’ll know a cheesecake has only partially thawed if it is still cold to the touch and still has ice crystals on areas of the cake.

However, if the cheesecake has thawed completely, you can’t refreeze it. Fully thawed cheesecakes have warmed enough to allow bacteria to grow and the dairy to begin to spoil.

Signs You Shouldn’t Refreeze A Cheesecake

If you are concerned about the safety of refreezing a cheesecake, you can run a few tests to determine if it’s safe to do so.

If you plan on eating your cheesecake in the next week, you can store it in the fridge instead of the freezer.

To store cheesecake in the refrigerator, do the following:

2. Remove cheesecake from its original packaging and store it in plastic containers.

If you’ve previously frozen a cheesecake or have a frozen store-bought cheesecake you want to eat, do not try and defrost it at room temperature.

Still, you won’t have to worry about the cake going bad or developing bacteria like you would if it defrosted at room temperature.

You can usually keep cheesecake defrosted at room temperature in the fridge for a period of three to five days.

Always put the defrosted cheesecake in the fridge while it is still cold to the touch to prevent bacterial contamination.

Things To Know About Cheesecake At Room Temperature

The USDA defines anything between 41 degrees and 140 degrees Fahrenheit as “The Danger Zone.” Room temperature, usually defined as around 70 degrees, sits in that zone.

Because cheesecake is made of perishable ingredients like eggs, milk, and cheese, it can’t sit out indefinitely at room temperature. So it is usually best to keep it in the fridge unless you plan on eating it in the next hour.

However, if you have a party or guests over, you can safely keep cheesecake out at room temperature for two hours. Any longer, and the perishable ingredients in the cake start going bad.

You Can Get Food Poisoning From Spoiled Cheesecake

While it’s not as prone to getting people sick as hamburgers or raw lettuce, cheesecake can cause food poisoning.

Usually, food poisoning occurs because the cheesecake was left out at room temperature for more than two hours or has sat in the fridge for more than a week.

Therefore, it’s best not to risk it; if the cake might have sat out for too long, just throw it away to avoid getting yourself or others sick.

If you find yourself with an abundance of cheesecake, never fear; you can pop that delicious dessert into the freezer for next time.

Just ensure that you wrap and store the cheesecake properly, and never for more than two months. Enjoy!