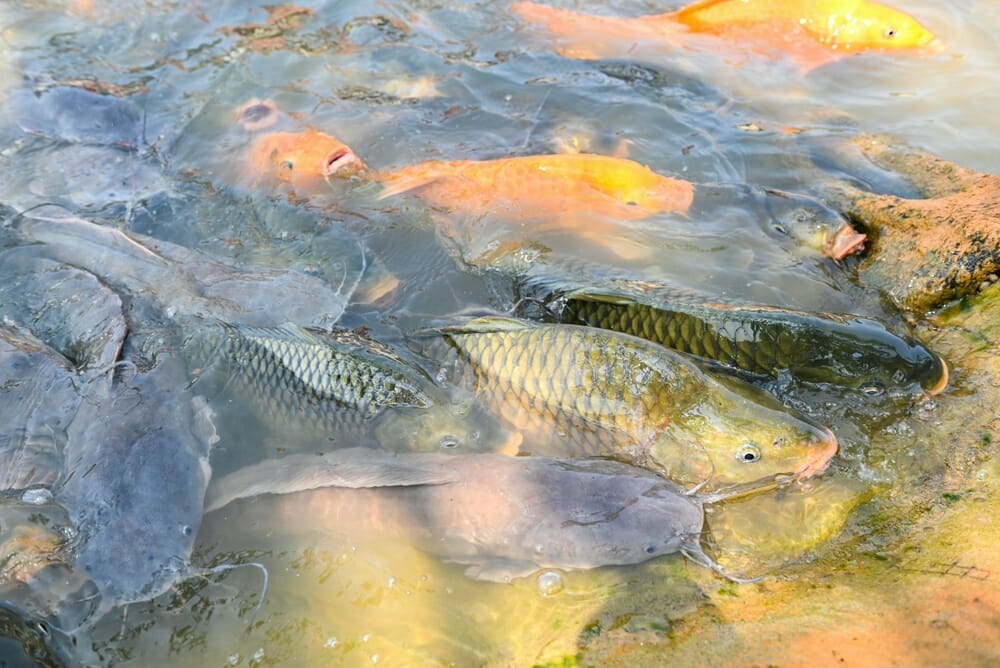 If you’re like most home cooks, you probably have a few different types of fish in your regular rotation.

Maybe you love salmon, or you can’t resist a good tilapia fillet. Or maybe catfish is your go-to for a healthy and affordable option. But which one is healthier? And which one tastes better?

The taste and texture of tilapia and catfish are similar as well. They’re both flaky, white fish that can be cooked in a variety of ways.

However, catfish has a slighter stronger, more fishy taste than tilapia, which has a milder, sweeter taste.

To top it off, catfish and tilapia tend to cost the same. The only time you’ll usually see a difference is if one of them happens to be on sale.

In fact, since tilapia and catfish are so similar, it can be hard to determine the difference sometimes.

Thankfully, that’s what we’re here for. In this blog post, we’ll compare catfish and tilapia to see which one is the healthier choice.

We’ll also discuss which fish tastes better and provide some recipes for both types of fish. So read on to learn more about catfish and tilapia!

Catfish vs. Tilapia: Which is Healthier?

Both catfish and tilapia are low in calories, making them excellent choices for a diet-friendly fish.

However, catfish has more cholesterol than tilapia does, so catfish may not be the best choice if you’re watching your blood cholesterol levels.

Catfish is low in calories, high in protein, and has no carbs. It’s also a good source of vitamin B12.

However, catfish does have more cholesterol than tilapia does, so you may want to limit your consumption if you’re watching your cholesterol levels or are at risk for heart disease.

Here is the full nutritional information for catfish:

The nutrition facts for tilapia are similar to that of catfish, but tilapia has fewer calories and less cholesterol.

All in all, this makes tilapia a great healthy choice!

Here is the full nutritional information for tilapia:

As you can see in the table below, tilapia has less cholesterol than catfish does. So tilapia is the healthier choice when it comes to cholesterol levels.

But tilapia isn’t the only one that has omega-3s! Catfish also contains these healthy fatty acids, which are good for your heart health.

So catfish and tilapia both make excellent choices as far as omega-3 content goes.

Catfish is still a healthy choice for other reasons as well. For example, it is still low in calories and high in protein.

Tilapia is, however, healthier than catfish in these regards.

Catfish vs. Tilapia: Which One Tastes Better?

So catfish and tilapia are both healthy fish choices. But which one tastes better? It’s hard to pick a clear winner here!

Both catfish and tilapia have mild, white meat that is flaky when cooked. They also take on the flavor of whatever they’re seasoned with very well, so they can be paired with a vast array of spices and sauces.

However, catfish has a slightly stronger taste than tilapia.

If you prefer mild fish flavors, tilapia might be your best bet. But if you don’t think tilapia will stand up to strong spices or bold sauces that mask the flavor completely, then go for catfish instead!

The flavor of catfish is mild and slightly sweet. It can be described as similar to cod or haddock.

If catfish is breaded, it takes on a slightly nutty flavor that might remind you of pecans.

Compared to tilapia, catfish has a slightly stronger, fishier taste.

The texture of catfish is flaky when it’s cooked, similar to cod or tilapia. However, catfish is less flaky than tilapia, and may be a little chewier.

Tilapia has a very mild and delicate flavor, making it well-suited to many different types of spices and sauces.

Since tilapia is a white fish, it has a slightly flaky texture that needs to be handled carefully in the kitchen.

Compared to catfish, tilapia has a more subtle, sweet, and less fishy flavor.

Tilapia is slightly more flaky than catfish, making it a harder fish to fry. But tilapia doesn’t have as strong of a flavor as catfish, so it still works well when breaded or seasoned with bold flavors.

If you like seafood dishes with bold flavors and textures, catfish and tilapia both make excellent choices.

But if you prefer milder flavors in your fish, then tilapia is probably the better choice of the two!

Which is Cheaper? Catfish or tilapia?

When it comes to buying seafood, your best bet is usually going with a less expensive option. So if you’re on a budget, catfish or tilapia both make great choices.

So which one will be cheaper? It all depends on where you buy from!

In California, catfish tends to be more affordable than tilapia. But in Texas, tilapia is the most affordable option.

This makes farmed catfish and tilapia a great choice for those who want to save money.

However, farmed fish is usually less healthy than wild-caught fish. So if you’re concerned about the environment and your health, stick to tilapia or catfish that is labeled as “wild”.

In most places, you’ll find catfish and tilapia frozen. This also cuts down on the cost.

For reference, here is the cost of catfish and tilapia from Walmart:

Catfish is a freshwater fish that is native to the Mississippi River and East Coast of the United States.

It’s known for its cat-like whisker-like appendages, also called barrels, around its mouth.

What catfish lacks in looks, it makes up for in taste! Catfish is low in calories and has a mild flavor. It’s also less flaky than tilapia, making it ideal for catfish fillets that are breaded or fried.

Tilapia is a type of fish that is native to the Nile River and other tropical areas of Eastern Africa.

It’s one of the most commonly farmed fish in the world due to its high tolerance for different types of water and climate, as well as its ability to reproduce rather quickly.

Tilapia has a mild taste, flaky meat texture, and is low in fat. It’s also high in protein and an excellent source of omega-3 fatty acids!

Since tilapia has less mercury than catfish, it has become increasingly popular as a healthy fish choice.

What are the Best Tilapia Dishes to Cook?

Tilapia is a popular fish choice in many other countries around the world. This means that tilapia recipes are influenced by different flavors from different cultures.

Tilapia can be prepared using a multitude of spices and will taste different depending on how you prepare it! Here are a few recipe ideas for tilapia:

Oven-baked tilapia fillets are great topped with a light coating of olive oil and bread crumbs, or you can get more creative!

Here is a simple easy recipe for delicious baked tilapia:

Chunks of tilapia grilled on skewers with peppers, onions, cherry tomatoes, and pineapple.

Tilapia is a great fish to use for fish tacos! Try making some tasty tilapia tacos with a crunchy cabbage slaw wrapped in corn tortillas.

This tilapia recipe features breaded and baked filets and is topped off with marinara sauce and Parmesan cheese.

What are the Best Catfish Dishes to Cook?

Catfish is popular in North America, which means that catfish recipes are often influenced by American tastes. That’s why catfish fillets are often breaded and deep-fried!

However, catfish can also be pan-seared or grilled. You can season catfish with any traditional mix of spices for a classic catfish taste.

Here are a few recipe ideas for catfish:

1.Baked Catfish With Lemon and Herbs

This dish features catfish fillets baked in the oven with lemon juice, garlic, salt, and pepper.

Here is a simple easy recipe for grilled catfish:

These spicy blackened catfish fingers are baked instead of fried and dipped in a creamy Creole sauce.

Catfish Po’Boys are fried catfish fillets in a toasted bun topped with lettuce and tomatoes.

As you can see, a popular way to prepare both tilapia and catfish is frying. But which fish is actually better for frying?

The truth is that tilapia and catfish both taste delicious when fried. However, tilapia does not hold up as well as catfish during the frying process.

If you’re cooking a larger batch of fish sticks or fish sandwiches, you’ll notice that the bread crumbs fall off of tilapia more easily than they do with catfish.

Tilapia is also a flakier fish than catfish, so tilapia tends to break apart more easily when you bite into the fish stick or sandwich.

This isn’t necessarily a bad thing – just something to keep in mind if you’re planning on making fried tilapia!

Catfish, on the other hand, holds up well when fried. This means that catfish is less likely to break apart and fall off of your food.

Catfish is also a thicker fish than tilapia, which makes it an ideal choice for frying.

With all the information we’ve gone over, it’s no surprise that catfish and tilapia are two of the most popular fish choices on menus today.

They’re both healthy because they have low mercury levels and are high in protein. Despite their tendency to be breaded and fried, they’re also low in calories.

The mild white meat of tilapia and catfish is flaky when cooked, making it easy to pair with different sauces/seasonings–so there’s a dish for everyone!

The biggest difference is that tilapia farms are a major contributor to ocean pollution.

So if you want a fish that’s both tasty and good for the environment, catfish is your best bet!

If you still have questions about either one or want some tips on how to cook them best so they taste even better than before, let us know in the comments below.

We’ll be happy to answer any questions you might have or provide more helpful recipes. Now go enjoy your meal!