Is It Cheaper to Make Your Own Beef Jerky? 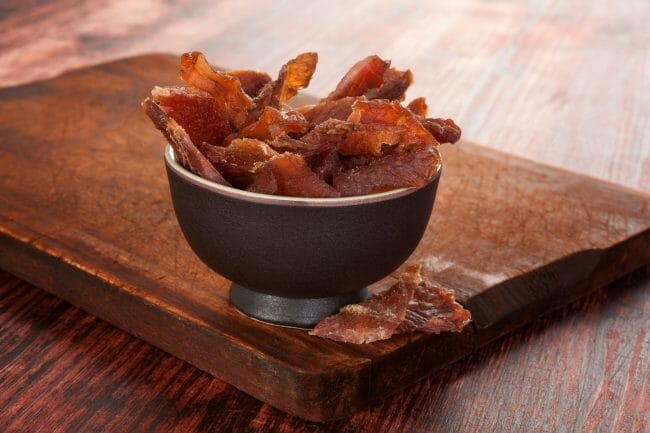 Beef jerky is a uniquely American phenomenon. Jerky is a curing technique originally called “char’qui,” employed by indigenous peoples of North and South America, which was later shared with European settlers.

Without jerky, the colonies likely wouldn’t have survived.

It also isn’t surprising that many people have held onto the convenient meaty snack of beef jerky, and that it has remained a popular cooking method for Americans, especially in the South, as well.

Unfortunately, jerky has gone from being the primary method of preserving meat, to the average beef jerky package costing $10 for 10 servings. This causes a dilemma for people deciding if the cost is worth the convenience.

First and foremost, it is cheaper to make your own beef jerky. Once you’re set up with the items you need, you can make up 18 servings of beef jerky for as little as $10.

Making beef jerky can cost more if people select expensive ingredients, but most ingredients are items that many household kitchens already have.

Some more benefits to making your own beef jerky are being able to control what is going into your jerky to avoid allergens and cross contamination, and you can cater the flavors to your preferences.

Keep reading to see how this article comprehensively covers the general nutrition, ingredient choices, and potential costs of beef jerky.

The demand for beef jerky becomes more pronounced as many fitness blogs also start declaring jerky as a health food. Beef jerky is definitely an ideal snack for people looking to easily increase their protein consumption in a low-fat form, or people who are frequently on-the-go and want something that’s easy to carry around.

Beef jerky is full of a lot of vitamins and nutrients besides protein; however, it does have some drawbacks.

For such a small strip of meat, beef jerky certainly packs a punch, as it’s loaded with a long list of vitamins and nutrients.

One serving (28 grams) of beef jerky has:

It should be noted that except for zinc (21% of DV) and vitamin B12 (12% of DV), there is only between 3-9% of your recommended Daily Value for each of the other listed nutrients.

Beef jerky may not be the best frequent snack item for those on low-sodium diets, as the meat curing process results in beef jerky having very high sodium. Additionally, beef jerky is still a red meat, and overconsumption of cured red meats has been linked to increased risk of cancer.

So, while beef jerky can be a healthy snack, it should be consumed in moderation like everything else.

How Much Does Beef Jerky Cost?

Depending on the brand, beef jerky at Walmart can between $0.98-$1.72 per ounce. One serving of beef jerky is an ounce, so its easy for this snack to get costly.

Since the average bag for one person holds around 2 ounces, if this is a grocery cart regular you should keep reading to find out how much money you will save making beef jerky at home.

How Much Money Will I Save By Making Beef Jerky At Home?

Under the assumption that you do not have any of the ingredients already, the first time you make jerky will cost you about $20. However, this will be to produce 12-18 ounces of jerky (depending on how much beef you buy), so while you may not necessarily save money the first time, you may only spend $3 more than if you just outright buy the same amount of jerky.

Generally, you will begin saving money by the second time you make jerky. If you buy more expensive cuts of meat, you won’t be saving quite as much, but alternatively you get to do quality control for your jerky.

Is Making My Own Beef Jerky Worth It?

Besides the benefit of saving money, homemade beef jerky may be a solution for people with food allergies or sensitivities. Often times, regular store-bought beef jerky is not gluten-free and has cross contamination with other allergens. This is due to traditional soy sauce typically being used, and the jerky being processed in a facility that also houses other contaminants.

To avoid the risk and financial strain of searching for gluten-free beef jerky, you can make homemade jerky that people with wheat allergies, celiac disease, or gluten sensitivity can enjoy!

There are some ingredients that frequently appear on homemade beef jerky recipes. I put them together so you can have an idea of what your grocery list may look like as you prepare to make jerky.

The good news about jerky ingredients is, besides the beef, once you make the initial purchase, they’ll likely last you through several rounds of jerky making.

Not every recipe requires all of these ingredients, so it’s best to pick a particular recipe before making that trip to the store!

Soy sauce is used for jerky because it contains enough sodium for curing the beef and, according to a study from 2013, actually enhances the long-term flavor of the jerky!

For those with wheat or gluten sensitivities, substitutes for traditional soy sauce can be gluten-free soy sauce or liquid soy aminos. A cheaper allergen-free alternative is beef broth.

Liquid smoke is a liquid that is either brushed onto meat or mixed into a marinade, in order to provide smoky flavors like hickory, applewood, pecan, and mesquite to meat without using a smoker.

A little bit goes a long way with liquid smoke, so you can consider it to be a long-term investment in regards to your jerky aspirations!

Normally a recipe features either Worcestershire sauce or liquid smoke, but not both.

Typically, beef jerky recipes call for a tablespoon or two of brown sugar, maple syrup, or honey. Since jerky is a sodium-loaded snack, a little bit of sweetness goes a long way in enhancing the flavor to umami instead of just salty.

If sugar is not an option for you, sweetener substitutes can be used as well.

Spices are a key component in beef jerky, as the beef is marinated prior to the curing process.

Common spices for beef jerky are:

It is important to get the correct cut of beef when making beef jerky, because the wrong cut could make it too chewy to eat.

The top three recommended cuts of beef for jerky are:

Generally, the most popular is round. This is because the meat is particularly tender and low-fat, which is ideal for making jerky.

Can I Make Ground Beef Jerky?

Yes, you can save a few dollars by using low-fat ground beef instead of whole cuts of meat. However, if you use ground beef you may need to purchase a jerky gun to help you make jerky strips of equal thickness.

A jerky gun can cost anywhere from $19-$40, depending on the quality. Therefore, it may be worth it to consider how dedicated you are to making jerky before you make that investment.

Do You Need A Food Dehydrator To Make Beef Jerky?

Many recipes mention using a dehydrator; however, you can use just a regular oven. There are certain benefits and drawbacks of a dehydrator that you should consider before deciding.

Pros Of A Food Dehydrator

Because food dehydrators only have one purpose, they tend to dehydrate beef jerky more evenly than an oven can. Additionally, they have their own temperature controls and are pretty hands-free once you get them going.

Cons Of A Food Dehydrator

The biggest detraction of using a dehydrator is how expensive they are. Unless you’re making jerky very frequently or prefer to dehydrate multiple types of foods, it may not be worth the investment.

Additionally, dehydrators cannot typically hold as much jerky as an oven can. A dehydrator that can fit the same as an oven pan sheet is going to get expensive very quickly.

On a final note, before you go, I put together a basic beef jerky recipe for you to get started with.

Whisk the Worcestershire sauce, soy sauce, paprika, brown sugar (or other sweetener), black pepper, red pepper flakes, garlic powder, and onion powder in a large bowl. Once thoroughly combined, add in sliced beef and mix thoroughly. Cover the bowl in plastic wrap or aluminum foil and marinate in the fridge for at least 3 hours.

Preheat oven to 175 °F (or 80 °C) for at least 10-15 minutes. Prepare baking sheet by lining it with aluminum foil and then placing the wire rack on top of the aluminum foil. This is to make sure the jerky does not sit in any fat drippings, which will ruin the drying process and make it chewy.

Discard marinade and pat dry excess marinade off the beef strips. Line beef strips in a single layer on the wire rack.

Once oven is preheated, bake the beef for 3-4 hours, or until dry and leathery. Afterwards, cut into desired sizes and store in an air-tight container or bag.

Jerky is an interesting way to stay connected to indigenous American roots while also getting the benefits of beef jerky.

Beef jerky is high protein, low fat, full of vitamins and nutrients, and is a convenient snack for busy people.

While individuals who are okay with paying around a dollar per serving may not be sure about the value of making jerky at home, multi-person households, people with food allergies or sensitivities, or anyone who has access to large amounts of beef for cheap will probably be running to make jerky later today.

If you already have a well-stocked sauce and seasoning pantry, you may only need to purchase the beef. Ultimately, every time you make jerky from 3 pounds of beef, you’ll be saving around $5-10.