How Long Can Cooked Bacon Sit Out? [Plus Best Ways to Cook & Store It] 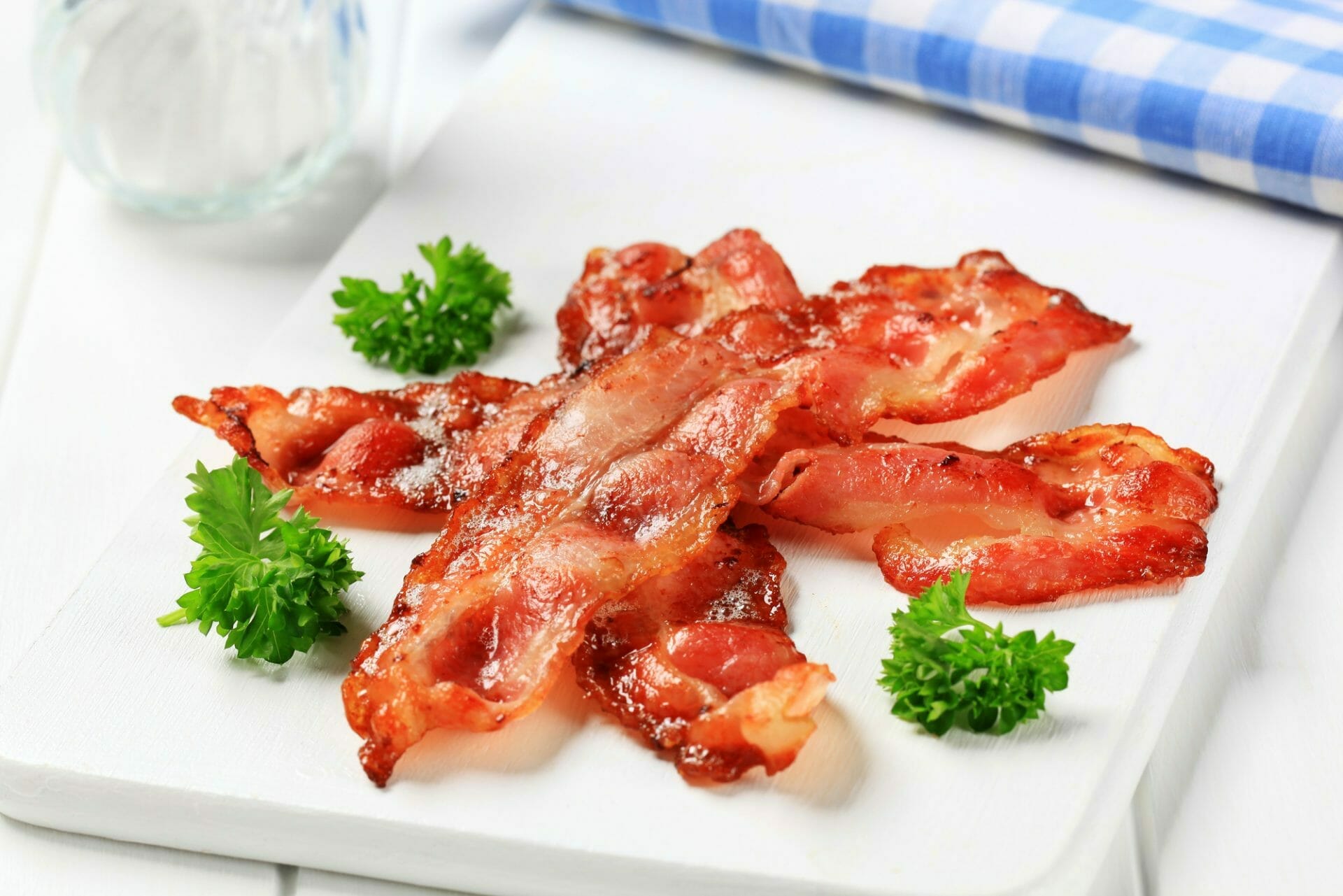 The family has finished eating breakfast, you’ve washed the dishes, and everyone has gone about their day. A while later, you discover leftover bacon that you’ve left on a plate on the counter. It’s tempting, but is it still safe to eat? Should you toss it in the trash or the refrigerator?

Bacon is a breakfast staple in our house. It’s a rare occurrence for bacon to go uneaten, but it’s essential to consider how long it may have been sitting out when it does. The last thing you want to do is make yourself or your family sick.

This article will discuss when and why it might be a good idea to throw out your cooked bacon and how to store and use up cooked bacon in the future safely.

How Long Can Cooked Bacon Sit Out At Room Temperature?

While this is a comfortable temperature for us, your meat can grow dangerous bacteria in temperatures between 40 and 140 degrees Fahrenheit. Unfortunately, this is also true for cooked and cured meats.

It’s a common belief that you can leave out cured meat at room temperature for a long time, possibly even overnight, and still eat it without getting sick.

While this could be true for many healthy individuals, to be on the safe side, it’s still not advised to exceed the two-hour mark since some people could become extremely ill.

Bacon is a cured meat that goes through a curing process to add flavor, remove moisture and preserve the meat.

The curing process uses ingredients like salt, sugar, sodium nitrite, and other seasonings or chemicals to make a brine injected or used to soak the bacon.

Naturally sourced nitrites come from celery, beets, parsley, cherry powder, or another similar product that is naturally high in nitrates.

According to the USDA, uncured bacon can carry the “natural” label since it contains no artificial ingredients.

For this reason, the chances of getting sick from uncured bacon could be slightly higher than with cured bacon due to the preservatives.

What Are The Risks Of Eating Cooked Bacon That Has Sat Out?

The risks of developing an illness from cooked bacon are slightly lower than other uncured, cooked meats due to the curing process.

However, a considerable threat from consuming cooked bacon sitting out too long is Staphylococcus aureus. Staphylococcus is a salt-tolerant bacteria that thrives on cured meats and can multiply rapidly.

In addition, Clostridium perfringens, Listeria, and Trichinosis are other parasites and bacteria that can infect and grow on pork products like bacon.

Therefore, if you experience symptoms such as nausea, diarrhea, or stomach cramping after eating, the bacon could be to blame.

Food spoilage bacteria is also a risk that comes with cooked bacon sitting for too long.

While food spoilage bacteria won’t necessarily make you sick, you still won’t want to eat bacon which has been allowed to grow this type of bacteria due to the “Ewww” factor.

Signs That Your Cooked Bacon Has Gone Bad

If you’re concerned that your cooked bacon may have spoiled on the counter, look for these signs.

If your cooked bacon has gone from the usual red or pink color to a greyish or greenish hue, then it’s probably no longer safe to eat and should be thrown away. Also, if it has developed mold, you should steer clear.

The smell of your cooked bacon could be a good indication that it has gone bad. If it’s lost that savory bacon smell and instead has a rotten or off odor, it might have dangerous or spoilage bacteria growing, and you should avoid eating it.

Your cooked bacon can develop a slimy texture if it’s turned bad. However, if it’s still ok to eat, it should have a nice and crispy feel.

How To Properly Store Cooked Bacon?

If it’s been less than two hours and the room temperature of your house isn’t overly warm, good news! Your cooked bacon may be salvageable.

You can safely store cooked bacon in the refrigerator for four to five days. However, to extend the life of your bacon, you can keep it in the freezer for two to three months.

To store cooked bacon in the refrigerator, place it in a plastic Ziploc bag or wrap it in plastic cling wrap or heavy-duty aluminum foil.

You can also keep it in shallow, airtight containers for extra freshness, but make sure the containers aren’t too large, or it will expose it to too much air.

If you have a good amount of cooked bacon leftover, you may want to save it in the freezer.

Start by arranging your cooked bacon on a parchment-lined baking sheet. If you need to, you can do multiple layers and place the pan in the freezer.

Once frozen, remove from the freezer and place the frozen bacon in an airtight Ziploc freezer bag to store.

How Long Can Cooked Breakfast Sausage Sit Out?

If you’ve left some breakfast sausage out with your bacon, the same rules apply.

Due to bacteria growth and the risk of illness, you should discard cooked breakfast sausage if it’s been sitting at room temperature for two hours or longer.

You may need to be even more cautious with breakfast sausage since it’s typically not cured and could be more susceptible to bacteria growth than bacon.

How Long Can Cooked Eggs and Bacon Sit Out?

The FDA recommends never leaving cooked eggs or egg dishes out of the refrigerator for two hours or more.

This includes hard-boiled eggs, fried eggs, or dishes containing eggs such as souffles and quiches.

If you plan to make an egg dish for a party or picnic, plan and make sure you’re transporting them properly by placing them in an insulated cooler with plenty of ice or ice packs.

Although thoroughly cooking your eggs will kill dangerous pathogens such as Salmonella, hazardous bacteria and parasites can still grow if cooked eggs are left out too long.

What About Shelf Stable Bacon?

It is safe to eat straight out of the package, but refrigerate once the box is open. If you expose shelf-stable bacon to air for too long, Staphylococcus aureus and other bacteria can grow just like with regular bacon.

Once open, shelf-stable bacon can last between 5-14 days refrigerated, but it’s essential to inspect it before eating just in case.

What Is The Best Way To Reheat Cooked Bacon?

If you’ve managed to save some cooked bacon from your breakfast feast and are looking to reheat it later, the best way to do this is to throw it back on the skillet or pan.

Step 2. Arrange the bacon in a single layer on the pan to prevent sogginess.

Step 3. Reheat the bacon for 1-2 minutes per side, using tongs to flip halfway through.

Step 4. Remove from the hot pan and enjoy!

Tips To Use Cooked Bacon

If you need some fun and delicious inspiration on ways to use up that leftover bacon, below are some excellent ideas.

Add It To A Salad

Bacon is delicious as a salad topper, so why not break it up into homemade bacon bits and toss it into your greens for lunch.

Put It In A Sandwich

Make a BLT or add a slice or two to your turkey or ham sandwich for a delicious and savory addition to your next meal.

Top Off Your Soup

Kick your soup up a notch by adding in some bacon bit toppers. Clam chowder, corn chowder, potato soup, and tortilla soup are just a few types of soup begging for that leftover bacon in your fridge.

Don’t Forget To Save The Grease

A great culinary trick is to save the bacon grease and use it for cooking oil. It makes for delicious fried potatoes or beans.

To save your bacon grease, do the following:

Pour the bacon grease into a resealable, clean glass jar for storage. Make sure you don’t use plastic as the hot liquid could melt it and make a big mess.

Store your bacon grease in the refrigerator for up to 3 months or in the freezer for one year. Make sure you let the grease cool completely before placing it in the freezer.

We know there is nothing more delicious or tempting than cooked bacon in the morning.

However, when it comes to your family’s health and the safety of your food, it’s best not to risk it.

Remember that even the most cured meats can still be dangerous when left out too long, and your health should always come first.

If you enjoyed this article, make sure to check out the article about how long can uncooked bacon sit out.