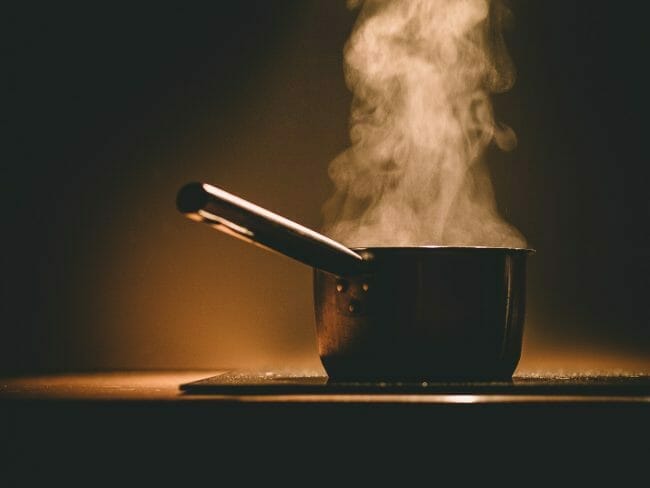 We are all concerned about maintaining a safe kitchen for our families. The dangers of starting a fire in the kitchen are very real. If you are wondering whether cooking oil is flammable, the short answer is yes.

However, as you dig into this topic, you will find that technically speaking, the answer is no. Are you confused yet?

Cooking oils can catch fire in your kitchen when they are heated on the stove or in a deep fryer. It would be best if you had a plan in place for putting out a cooking oil fire like placing a lid on the pan, smothering it with a fire blanket, or using a kitchen class (k) fire extinguisher.

Never try to put out an oil fire with water, as this will cause the fire to spread even farther. Also, if you do have a fire, call 911. It is not the last resort.

Keep reading for definitions and details about various cooking oils, how to store them, safely use them, and your options for fire safety in your home.

Canola oil is flammable. It has a smoke point of 410 degrees Fahrenheit; beyond this temperature, canola oil will catch fire.

In order to ensure it does not catch fire, cook with oil in a well-ventilated area with no combustible cooking components.

The flashpoint of canola oil is 600 degrees Fahrenheit; at this point, you may see little flames swirling around. This should cause alarm. Quickly take off heat and allow oil to cool.

Peanut oil is safe as long as you don’t go over 450 degrees. While peanut oil is great for frying and sauteing, it has a flashpoint of 450 degrees Fahrenheit.

This oil is great for low to moderate heat cooking, but beyond that, it is best to be watchful of the temperature this oil rises to.

You may think that flammable means something that can catch fire, and in a general sense, that is correct.

However, when we begin talking in technical terms about fires and the reactions involved in starting them, we quickly find that there are many more terms to sort out.

To understand all the technical jargon, we must begin with the flashpoint. This is the temperature at which a liquid will spontaneously ignite the air above it.

Any liquid with a flashpoint below 199.4 Fahrenheit is considered to be flammable.

Any liquid with a flashpoint over 199.4 is classified as combustible, meaning that it will catch fire and burn easily.

Even if a cooking oil reaches the flashpoint, it has to stay at the fire point to sustain the flame.

The flame point is the temperature required to keep the ignition of the flashpoint burning.

When you are cooking with oil, if it reaches the flashpoint and you immediately remove the pan from the heat source, the fire will likely go out because the fire point will not be met. Another critical quality to know about the oils you cook with is the smoke point.

The smoke point is a warning signal that the oil is nearing the flashpoint.

In some cases, oils may spontaneously combust. You may have heard of compost piles or improperly stored oily rags catching fire suddenly. These fires are a result of the oils reaching their ignition temperature.

The cooking oils that you have in your home are quite stable and safe to store. However, for the sake of safety, keep them stored away from heat sources.

The most significant danger of cooking oils igniting spontaneously is if you have rags with oils on them that have been allowed to dry and sit around in a pile for a long time.

If you clean up spilled oil with rags, go ahead and wash them to prevent this danger.

You may have a variety of cooking oils in your home. The first sign that your oil is getting too hot while you are cooking is the smoke point.

Therefore, you should know the approximate smoke point of the oils you commonly cook with and be ready to reduce the heat or remove it if the oil is heating too quickly.

Peanut, Sunflower, and Soybean oils have smoke points of 450 degrees Fahrenheit. Canola oil is right in the middle of the pack with a smoke point of 435 degrees.

Corn, olive, and sesame oil have smoke points around 410 degrees, while sunflower oil’s is about 390 degrees.

Many people enjoy the benefits of coconut oil these days, but you should be aware that it has a much lower smoke point of 350 degrees Fahrenheit.

Coconut oil is not the best choice for frying due to its low smoke point. If you are committed to using coconut oil, look for highly refined coconut oil with a smoke point of 400 degrees.

Is Gas Or Electric Safer?

When you imagine an oil fire, you may think that a gas stovetop contributes to the most significant number of fires. However, you will be surprised to know that electric stovetops are more likely to cause grease fires.

Most professional chefs and experienced cooks prefer gas stoves for their ability to directly control the amount of heat applied to the pan.

This holds true for oil fires as well. As explained previously, if you can remove the heat source from burning oil just at the flashpoint, the fire will go out because it needs sustained heat to establish a burn. On a gas stovetop, when you turn the fire off, it is off.

Even when you turn the burner off on an electric stove, some residual heat remains as it cools down.

The heating element can produce enough heat to keep an oil fire burning even after turning off the burner. If you use an electric stove, you would have to remove the burning pan from the stovetop altogether.

Furthermore, there is no color change on some electric stoves when a burner is hot, so you may think it is cool even when it is still hot enough to fuel an oil fire.

This lack of control over the heating element is why electric stovetops are more likely to cause oil fires than gas stovetops.

Is Frying A Turkey Dangerous?

Another common oil fire is from frying turkeys at Thanksgiving. These fires occur because people use the wrong kind of oil, put the turkey in while it is still frozen or has too much water on it, or use the fryer in an enclosed area.

Also, the turkey must be completely thawed, and all excess water should be patted dry before carefully lowering the bird into the oil. Also, always use the fryer outdoors in an open area.

How To Put Out A Small Oil Fire?

Any fire in your kitchen is frightening, and you need to move quickly to put it out. You should plan ahead and know how to put out a fire so that you don’t panic if one breaks out.

Anytime you are cooking with oil at a high temperature, you should be prepared to put out a fire.

Keep a lid for the pan and a fire blanket or fire extinguisher handy.

Oil fires must be removed from the heat source and smothered to be put out. The first signal your oil is too hot is the smoke point.

If your oil starts smoking or boiling, turn down the heat and remove it from the burner until it cools down.

Smother With A Lid

If your oil reaches the flashpoint and you can do so safely, turn off the burner and put a tight-fitting lid on the pan.

Hold the lid like a shield and lay it on the top of the pan from front to back so that you don’t stick your arm into the fire.

How To Put Out A Large Oil Fire?

If you cannot safely move the pan or smother the fire with a lid, call 911. This is not a last resort move.

The fire department is equipped to handle fires better than you are. Oil fires can be deceptive. You may think that you have put it out, only to have it pop up again in a few minutes.

However, if the fire is still confined to the stovetop, you can smother it with a fire blanket. Hold the blanket in front of you and lay it over the fire front to back.

Learn how to use it before you find yourself in a dangerous situation. You won’t have time to read the instructions during a fire.

If the fire spreads beyond the pan on the stovetop, call 911 and leave the house. You should not try to put out a fire that is spreading. Your belongings are replaceable; you are not.

What NOT To Do For An Oil Fire?

Do Not Try To Put It Out With Water

Never try to put an oil fire out with water. This will only cause it to pop, explode, and spread. Check out this video by the Slo-Mo Guys to see what happens when water hits an oil fire.

Do Not Try To Smother It With Flour, Sugar, Or Non-Dairy Creamer

Some people suggest that you can put different kinds of powders on an oil fire to put it out. This is not a great idea.

Any kind of powder that diffuses into the air can catch fire in the air and spread . . . well. . . like wildfire.

Flour and Sugar mills have been known to explode due to the particles in the air.  Watch this Mythbusters video for an understanding of how grain dust can cause explosions.

What About Baking Soda Or Salt?

When you research this question, you will find that you can pour salt or baking soda onto an oil fire to smother it.

While this is true, it requires a lot of salt or baking soda, and you have to be up close and personal with the fire.

So unless you are prepared with a large bucket of baking soda, the other methods we have recommended are safer.

The cooking oils we commonly use are safe and stable when used properly. Be aware of the smoke points and fire points of the oils you normally cook with and remove the heat if they are too hot.

Never leave oil unattended on a hot burner as a fire can start quickly. Keep your home and family safe by investing in a fire blanket and a fire extinguisher, and teach everyone how to use them safely.