Is A Diaper Genie Worth It? [Find Out Now] When you prepare your home for your new baby, you set up the nursery, paint the walls, buy a rocking chair, and pick out some onesies. You also buy tons of diapers and wipes. But what will you do with the dirty diapers? You might want to throw them in the kitchen trash and take it out once a day.

On the other hand, with a newborn, maybe running to the dumpster frequently is not feasible. A Diaper Genie can be an excellent solution for controlling the mess and odor of a baby’s dirty diapers.

The Diaper Genie provides easy-to-use diaper disposal and odor control. It traps odors from dirty diapers inside, and its large storage capacity allows you to carry out the dirty diapers less often.

Although it has a higher initial cost than a garbage can, a Diaper Genie will offer convenience for managing dirty diapers and blocking their odor.

Other diaper pails offer similar benefits but have additional disadvantages. Furthermore, there are other uses for your Diaper Genie after your little one is out of diapers that you may not have considered. Find out all about the Diaper Genie and its benefits below. 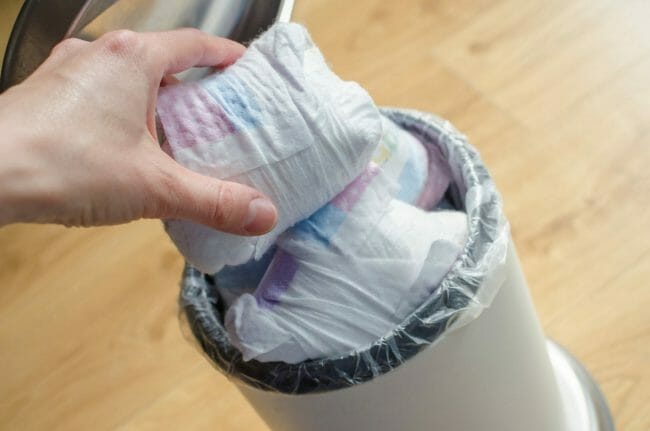 What Does A Diaper Genie Do?

A Diaper Genie is a trashcan with an easy to open lid. Inside is a specially designed trash bag that you can determine the length of by tying off the end to start and stop it.

At the top, you will find a clamp that keeps the bag closed to keep the diaper smell locked in. There is also a charcoal filter inside the lid that will help control the smell of the dirty diapers.

Once the canister is full, you take the bag out, tie a new knot for the bottom and restart the process. The Diaper Genie has a bag refill that holds 270 newborn diapers (but not all at one time).

How Many Diapers Will A Diaper Genie Hold?

Therefore, you will be emptying the trash every 2-3 days. On the other hand, the Expressions is larger and will hold up to 50 newborn diapers before needing to be emptied. This translates to 4-5 days between trash carryouts.

Each of the Diaper Genie models has its benefits. The Complete model is taller, so you don’t have to bend down to dispose of a diaper. It also has a foot pedal that opens the lid. You simply press with your foot, drop in the diaper, and release. It’s effortless to do with a fussy baby in your arms.

Furthermore, the Complete model has a built-in carbon filter to help reduce odors from the diapers. Removing the filled bags from the Complete is easy. The front panel tilts outward so you can cut and tie off the bag and easily lift it out.

If the style is one of your concerns, The Diaper Genie Complete comes in four soft colors to match your decor: white, gray, blue, and pink.

The Diaper Genie Expressions is shorter than the Diaper Genie Complete by about six inches. A button opens it on the lid that you operate manually. Then you also have to close the lid after depositing the diaper. The Expressions model doesn’t have a carbon filter; instead, it has an air-tight seal to keep odors tightly inside the canister.

Furthermore, the Expressions will hold up to 50 newborn diapers so you can make fewer trips to the garbage. When the canister is full, you flip open the top of the Diaper Genie and lift out the filled bag.

One disadvantage of the Expressions model is that the opening to put in the diapers is smaller; therefore, you must wrap the used diaper tightly so you can push it into the Diaper Genie without a mess.

In order to suit your sense of style, there are fabric sleeves available to fit over the Expressions model to make it visually appealing in your nursery. 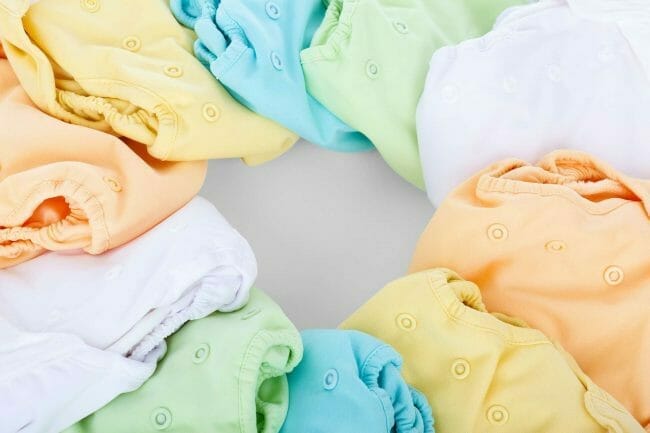 What Is The Cost Of A Diaper Genie And Bag Refills?

The Diaper Genie Complete costs about $40, while the Expressions is about $25. A package of 3 bag refills is about $20. There are two bag refill options, original and Clean Laundry scent. Both refill options are a patented 7-layer bag system designed to reduce odors and resist tearing.

If you want to do a little maneuvering, you can save some money by using regular trash bags instead of diaper genie refills. First, save the ring from a Diaper Genie refill. Next, place a regular trash bag into the canister of a Diaper Genie. Then snap the ring of a diaper genie refill down to hole the bag in place. Of course, you have to pop out the ring and tie up the bag each time you need to change the bag, but it is a significant cost saving on the refills.

How Does The Diaper Genie Compare To Other Diaper Pails?

The Munchkin Step diaper pail is a large, heavy-duty model that will stand up to rigorous diaper demand. It is foot-operated, so you can more easily manage a fussy baby and a dirty diaper. It accepts two different types of refills, the ring style similar to the Diaper Genie and the snap, seal, and toss style.

The Ubbi diaper pail is constructed from steel for better odor protection. It is available in a variety of colors to blend with your nursery decor. The Ubbi has a sliding lid to reduce air disruption and keep odors to a minimum. A child safety lock on the lid keeps curious little fingers out of the canister.

Unlike other diaper pails, Ubbi has a unique inner ring that can be used with any regular trash bag, saving money in the long run. The Ubbi steel diaper pail costs between $65 and $70.

The Skip Hop Diaper Pail has a unique feature that other diaper pails lack. It has an outer lid that you open to deposit the dirty diaper. Then, when you close the lid, an inner door opens, and the diaper falls into the trash bag below. This construction prevents odors from the trash bag from creeping up into the room.

This diaper pail is made of steel for durability and odor prevention. The Skip Hop uses any trash bag that you choose. It also has a caddy on the top for holding a few baby-changing necessities.

One disadvantage to this model is that the inner doors open downward into the storage space; therefore, it cannot be filled completely to the top, or the doors won’t open. Furthermore, you should ensure that the diaper you are throwing away is wrapped tightly so that it doesn’t leak onto the inner doors.

The Skip-Hop diaper pail costs about $85.

Ways To Reuse A Diaper Genie After Potty Training

Once you have invested so much in an odor-blocking trash can, you want to get good use out of it even after your child is potty trained. An odor-blocking diaper pail is great for other uses. It can be your kitchen trash can to collect smelly foods.

Disposing of Pet Products in the Diaper Pail

You can also use the diaper pail for disposing of puppy training pads or bags of dog poo. The odor-blocking diaper pail will also serve as a suitable receptacle for scoops of used cat litter. In fact, a little bit of cat litter in the bottom of the bag will also help absorb odors.

Dispose Of Personal Hygiene Products In The Diaper Pail

The diaper pail would make an excellent trash can for the restroom. Women know those feminine hygiene products need to go in the trash, and a diaper pail is a discrete and odor-blocking receptacle for these products. Furthermore, anyone who uses a restroom wipe or even has poor plumbing can dispose of toilet paper or wipes in the diaper pail to manage the trash and smell.

Use A Diaper Genie For Adult Diapers

For homes with people who have bladder problems or difficulties with incontinence, the Diaper Genie works just as well for Depends, or other adult diaper products as it does for infants.

As the parent of an infant or toddler, you will be dealing with many dirty diapers. Running to the outside trash several times a day is not feasible to keep your home smelling fresh.

A diaper Genie is an affordable and worthwhile solution for disposable diapers. For only an investment of $60, your nursery can be fresh-smelling, and diaper disposal will be convenient.

When you are thinking about the best diaper pail, consider the features like being foot-operated, having more capacity, or requiring specific bag refills. Remember that a sturdy, good-quality diaper pail can last through multiple children and even into the post-baby years as a repurposed tool for pet or personal products.