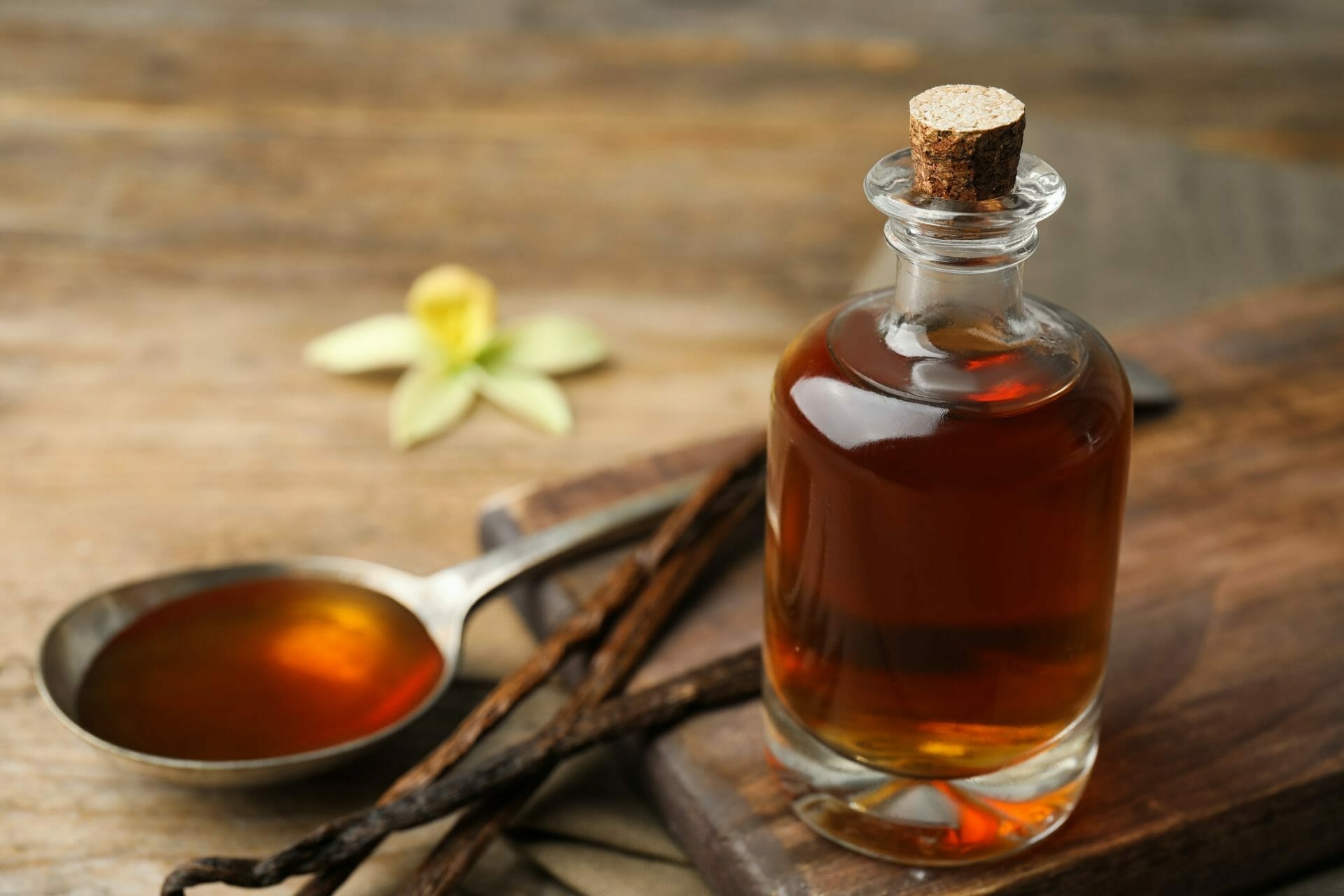 Vanilla is one of the most popular flavors out there. In fact, nearly 30% of Americans say their favorite ice cream flavor is vanilla!

So it’s no surprise that vanilla extract is the most popular extract by far for its enhancement of both sweet and savory dishes.

However, it can also be quite expensive, so you don’t want to waste any of this precious flavor.

The good news is that vanilla extract doesn’t go bad. It has an indefinite shelf life, but the alcohol slowly evaporates over time. This makes the flavor of your vanilla extract change slightly over the years, but it is still safe to use for cooking and baking.

Read on to see if different types of vanilla extract go bad and how to store them properly.

Does Vanilla Extract Go Bad in the Fridge

Even though vanilla extract has an indefinite shelf life, it can go bad in the fridge.

When you store vanilla extract in a humid environment, like the fridge, it promotes mold growth.

You cannot use vanilla that has mold in it and should throw it out for your own safety.

Do not store it near a stove, dishwasher, or refrigerator since the temperature changes by these appliances can make your vanilla extract go bad.

Does Vanilla Extract Go Bad in the Heat

Unlike the fridge, you can still use a vanilla extract that has been exposed to too much heat.

However, it’s going to taste different than the vanilla extract that has been stored in a cool, dry place.

After vanilla extract has been exposed to high heat, it will lose some of its potency and will become cloudy.

This vanilla extract is still safe to cook with, but you may not get as satisfying of a product.

To avoid overheating your vanilla extract, keep it at a cool room temperature, somewhere between 60°F to 80°F, and in a dark place.

How to Tell if Vanilla Extract Has Gone Bad

You know Vanilla Extract has gone bad if there is mold in it. If your vanilla extract is homemade, this could look like white floating pieces at the bottom of the bottle.

The mold may be different if you bought your vanilla extract from the store. Check the bottom of the cap for any mold, since that’s where it will grow if kept in the fridge.

While the mold will probably be white and fuzzy, food mold can be tons of different colors, including black, pink, orange, green, red, and blue.

Another hint to know that your Vanilla Extract has gone bad is if there is no smell.

But fear not, this much cheaper vanilla extract alternative still has a long shelf life, anywhere from two to four years after you purchase it.

Plus, if you can no longer taste the vanilla in your baked goods, it’s time to buy new imitation vanilla.

Fortunately, imitation vanilla that has gone bad won’t make you sick, it just stops adding flavor to your food.

The one exception to this is if your imitation vanilla is moldy (and that’s only if you keep it in the fridge, which you shouldn’t do), then you should throw it away.

Similar to vanilla extract, Mexican vanilla pretty much never goes bad and it has a shelf life of ten years.

Most Mexican vanilla in the US is made out of an extract of a vanilla plant, but be wary of any Mexican vanilla that is made from tonka beans or shows no ingredients at all.

FDA studies showed that coumarin, a flavor compound in tonka beans, produced liver damage in dogs and rats and is not safe to eat.

But like other types of vanilla, Mexican vanilla needs to be stored at room temperature in a dark place in order to maintain its long shelf life.

Madagascar vanilla has a shelf life of four to five years if you store it properly in a cool, dry place.

This type of vanilla doesn’t really go bad after five years, it just starts to lose its potency and color.

Once this happens, you won’t taste it as well in your dishes and you need to replace it.

Maybe you live next to a Farmer’s Market that sells precious vanilla beans, a rich ingredient that’s even better than vanilla extract.

Vanilla beans will go bad in about four years, so be sure to use up this expensive productbefore then!

To maintain their four-year shelf life, keep them in a cool, dry place and store them in a Ziploc bag. Never refrigerate or freeze your vanilla beans.

You can tell your vanilla beans are bad if they become brittle and dried up in their bottle. And don’t try adding water to rehydrate your beans because that won’t work!

When your beans dry up, the best thing to do with them is make vanilla sugar.

Split open the pods and place them in a few cups of white sugar in a sealed container.

Even though vanilla bean powder is simply ground-up vanilla beans, it has the shortest shelf life of only one year.

After a year, your vanilla bean powder has probably gone bad. While it’s probably fine to use unless it has mold on it, it’s not going to have much flavor.

If stored in a cool, dark environment, vanilla paste goes bad after three years. Vanilla paste is a mix of vanilla extract and vanilla powder, so you get a similar product as a vanilla bean without having to scrape any pods.

Some websites might tell you to store your vanilla paste in the fridge, but this is a bad idea.

Your vanilla paste will collect condensation (vanilla’s greatest enemy!) and will only last a year instead of three. Plus, this makes it grow mold, which is not safe to consume.

You can use vanilla that is twenty years old and it won’t hurt you. One thing to note is that this vanilla might taste different if the alcohol is evaporated, but it’s safe to eat.

How Can You Tell if Vanilla Extract Has Gone Bad

Since vanilla extract has such a long shelf life, it doesn’t go bad very often. However, if it is growing mold or doesn’t smell right, throw it away because it has gone bad.

Your nose is your best friend when it comes to knowing if your food has expired. If your vanilla extract doesn’t smell right to you, then it’s not right, and you need to throw it away.

The one exception with the smell is if you’ve bought a fancier bottle of vanilla extract than you usually do.

More expensive vanilla extract has a deeper and richer smell than cheaper vanilla extract, so it’s going to smell different, and your nose may not be used to it.

Storing your vanilla extract in the fridge causes condensation to form inside the bottle.

This is not good for your vanilla extract and makes mold grow.  Once mold appears, there is no saving your vanilla, and you need to throw it away.

How to Store Vanilla Extract After Opening

Whether your vanilla extract is opened or unopened, store it in a cool, dry place (like your pantry or a spice cabinet) at 60°F to 80°F.

Can You Get Sick From Expired Vanilla Extract

Even though it is not likely, you can get sick from vanilla extract if it is moldy. Certain molds produce mycotoxins, which are poisonous and can make someone sick.

To keep you and your family safe, always throw out vanilla extract that is moldy.

However, if your vanilla extract is just expired and not moldy, it’s highly unlikely it will make your family sick.

Vanilla extract lasts indefinitely, so if it’s “expired,” that just means it will have less flavor, not that it will make you sick.

Vanilla extract is a versatile ingredient that you can use in place of other extracts when necessary and never goes bad as long as it is stored in a cool, dry place.

Even though it never goes bad, it may lose its flavor and need to be replaced after it starts to lose its color.

Other types of vanilla, like Madagascar vanilla, have shorter shelf lives and will need to be replaced more frequently.

You don’t have to worry about getting sick from vanilla extract unless there is mold on it. When there’s mold, take no risks and throw it away.

So rest easy and use that whole bottle of vanilla extract down to the last drop.