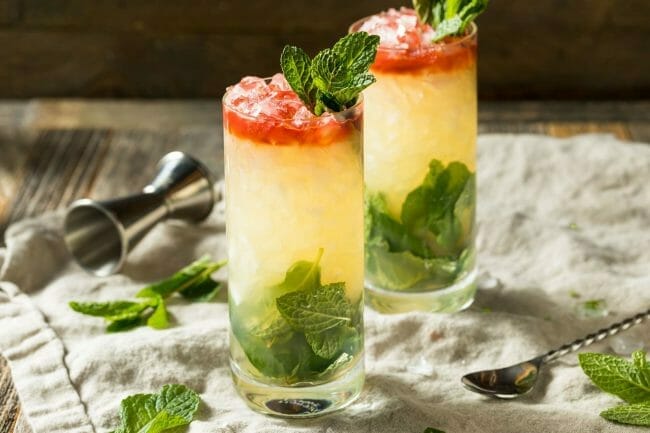 During the pandemic, I became interested in mixing my own drinks at home, like many others. In the process, I became more acquainted with fermented liquors, especially Dubonnet.

With a very high alcohol content, Dubonnet Rouge has a thick, almost syrup-like texture and it’s a full-bodied and robust drink.It tastes like an herbal port. However, Dubonnet is sometimes hard to come by. Luckily, Dubonnet can be substituted with a variety of more well-known liquors.

In this article, we will look at 10 different substitutions, in what applications they work best, and our favorite Dubonnet recipes.

Like Dubonnet, Vermouth has a red wine base and flavored herbs, spices, and barks. In Spain, Vermouth on the rocks is a common aperitif with a spritz of soda water and garnished with a skewered green olive or citrus twist.

Vermouth is a fine substitute for Dubonnet as an aperitif. Substitution: 1 oz : 1 oz

Amaro, an Italian herbal liqueur, is traditionally served straight up or on the rocks in a tumbler as either an aperitif or digestif. A slice of lemon is sometimes added and the bitterness can be diluted with seltzer water on a warm day.

Amaro is another great substitute for Dubonnet as an aperitif. Substitution: 1 oz : 1 oz

Lillet is a brand of three types of aperitifs: rouge (red), blanc (white), and rose. In place of Dubonnet, one would choose Lillet Rouge, though the other two Lillet’s are great options for another day.

Lillet Rouge is a blend of 85% Bordeaux region wines and 15% liqueurs, mostly citrus liqueurs. The mix is then stirred in oak vats until blended. Substitution: 1 oz : 1 oz

Pimm’s is sweet with an herbal-spice flavor accented by caramelized orange and is very popular in England. It can be served as an apéritif or digestif.

It has a similar taste to Dubonnet because it shares one key ingredient: quinine. Substitution: 1 oz : 1 oz

Cynar (pronounced like Cheetos: chee-nar) is a bittersweet Italian liquor made from artichokes. Known as an aperitif or digestif, Cynar is sometimes consumed straight up before or after a meal or afterward due to its main ingredient.

Cocktails made with Dubonnet are usually quite simple, making the ingredient easy to substitute.

Campari is an Italian alcoholic liqueur from the infusion of herbs and fruit in alcohol and water. Like Dubonnet, it is usually used in simple cocktails and garnished with citrus.

Invented in 1860, today it remains one of the most popular Italian drinks. Substitution: 1 oz : 1 oz

If your cocktail recipe doesn’t already call for gin, it might make a good substitute for Dubonnet. The botanicals found in gin make it the ideal hard liquor for apéritifs and cocktails. After juniper, gin tends to be flavored with botanical/herbal, spice, floral or fruit flavors or often a combination, but there are now many different styles and flavors of gin.

It is distilled from wine or a fermented fruit mash and gets its color from the wooden containers it is stored in. Brandy is also often used to fortify sherry, Madeira, and other dessert wines.

Sherry is a Spanish fortified wine made from white grapes. In Europe, “Sherry” has a protected designation of origin status, and under Spanish law, all wine labeled as “Sherry” must legally come from the “Sherry Triangle”.

The ritual of vanencia is used for pulling Sherry samples from the aging barrels in the cellars, consisting of a small cylindrical steel cup at the end of a long wicker handle performed by venenciadors in a uniform consisting of a red sash and short black coat. (For a demonstration, click here >>) Substitution: 1 c : 1 c

Sometimes referred to as a quinquina (aromatized wine usually used as an aperitif), Dubonnet is a liquor made from a blend of fortified wine, herbs, and spices that contains cinchona bark, which provides quinine – an ingredient originally used to prevent malaria.

Dubonnet tastes like a combination of Port or Sherry and a herbal liqueur. The red version of Dubonnet is sweeter with spice flavors, such as thyme, rosemary, fennel, anise, orange zest, and nutmeg.

The relatively new white variation of Dubonnet is dryer with more intense spicy and herbal notes.

How To Select A Substitute For Dubonnet

The first step is to determine the way Dubonnet will be used in your recipe. Most people think of Dubonnet as an aperitif that might only be required in cocktails.

But actually, there are quite a few interesting recipes that call for this sweet, aromatized wine-based drink. Some sweet desserts, like pashed pears, or savory dishes that call for sauteed mushrooms in Dubonnet can easily be made without this unique liquor with a few adaptations.

Next, choose a substitution. Dubonnet comes in white and red, and different recipes will call for one version or the other. When choosing a replacement, it’s best to stick with a similar profile (color and taste).

Popular Recipes With Dubonnet (And Substitutions)

The Queen of England’s favorite cocktail is a Dubonnet and Gin. Whether you and your friends are binging The Crown or holding your own high tea, this could make the perfect party drink recipe.

Although many popular Amaros are Italian, an English Amaro like Gerry’s or Asterly Brothers might be a better fit for The Queen’s Cocktail.

Poached Pears in Dubonnet is a simple gluten-free recipe for a fun morning start or an evening dessert. Poaching is gentle, stove-top cooking. Winter pears are ideal candidates for this recipe since they keep their shape.

Substitution: Try Sweet Vermouth. Sweet vermouth usually comes from Italy, is sweet, spiced, herbal, and sometimes notably vanilla – perfect to make this poached pears recipe interesting. While Martini & Rossi and Noilly Prat are the most notable brands, Carpano Antica Formula makes an exceptional sweet vermouth that would be perfect in this poached pears recipe (just be sure to refrigerate after opening).

This recipe is an easy gluten-free and dairy-free crowd-pleaser perfect for a date night in or an evening with friends.

Substitution: Try Sherry. Since this bite sizes appetizer would make the perfect tapas, a Spanish Sherry would be the perfect substitution for this recipe. It’s boozy and thick, but also comes in many different flavor profiles to enhance this quick, delicious small plate.

Interestingly enough, the best cooking sherry will have just the right amount of salt added to the batch without destroying the recipe. While there are actually cooking Sherrys out there, Taylor makes a great dry and cheap sherry that many chefs swear by.

Adapted from: Only Gluten-Free Recipes

Is Dubonnet A Vermouth?

No, Dubonnet is not vermouth, but both could substitute for one another. Like a vermouth, Dubonnet is a fortified, aromatized (by herbs and spices) wine.

Is Dubonnet Similar To Campari?

Dubonnet and Campari are both aperitifs concocted from herbs and spices, but Dubonnet is said to be sweeter than Campari.

Dubonnet tastes like a strong wine that has a thick, syrup-like quality and is full-bodied.

What Is Dubonnet Similar To?

Dubonnnet is most similar to Lillet and vermouth.

Is Dubonnet Similar To Port (Or Sherry) (Or Vermouth)?

Similar? Yes. The same? No. Let’s provide some context: Vermouth, port, and sherry are all “fortified wines”. A “fortified wine” is a wine that has a distilled spirit added to it, to increase its alcohol content — fortifying it.

As we learned earlier, “distilled spirits” include brandy and cognac – grape spirits. But more interestingly, ​​fortified get more distinct. For example, Madeira is a fortified wine that only comes from Portugal’s Madeira Islands.

Port wine only hails from Portugal in the Duoro Valley. Marsala only comes from Marsala, a city on the Italian island of Sicily. There is a sub-group of fortified wines called “aromatized wines”.

Vermouth is specifically an aromatized wine – a fortified wine that has also been flavored with herbs, spices, or natural flavorings. Another kind of aromatized wine is quinquina (mentioned above) – making Dubonnet and Lillet Blanc aromatized wines.

Dubonnet is a unique aperitif that is favorited by Queen Elizabeth II and mixologists across Europe. It comes in red and white, and is ideal for those who are interested in creating traditional cocktails or jazzing up recipes that call for aromatized liquor.

Depending on your use, there are many great alternatives out there. Among them, Vermouth, Amaro, and Aperol make easy-to-find and easy-to-use replacements.