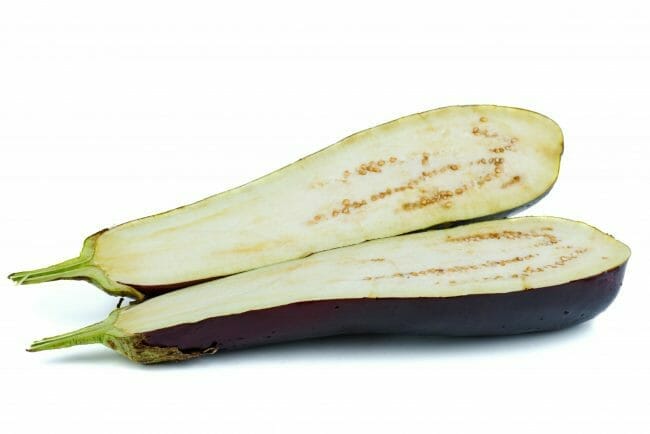 So you bought an eggplant, sliced it open and found it has seeds! If you were alarmed, you are not the only one.

My husband asked me something I had never considered before – is it okay to eat the seeds of the eggplant?

I had never considered removing the seeds of an eggplant before cooking it, so I immediately started to do my research.

Generally speaking, eggplant seeds are completely safe to eat. Younger eggplants have larger and better tasting seeds than mature eggplants. Once the eggplant is mature, the seeds are much smaller and darker in color. They taste more unpleasant and bitter.

Eggplant has many health benefits, which can be found right in the seeds and the skin of the eggplant.

There is a common misconception that eggplant isn’t safe to consume because it is a part of the nightshade family of produce, but it’s actually one of the best vegetables out there.

Overall, it is a versatile ingredient that can be used in any dish, right down to its seeds.

Ok so we now that I am clear that you can eat eggplant seeds, the next thing that comes to mind is the skin.

Can You Eat Eggplant Skin?

The thick purple skin of an eggplant is what makes it stand out in any garden, but is it safe to eat? Of course it is!

Sometimes it’s easier to remove the skin if you’re going to use the meat of the eggplant in a lasagna or eggplant parmesan, but roasting eggplant with the skin intact can make for a delightful dish.

If you choose to remove the skin, it’s easy to do with a vegetable peeler or a knife.

Most people choose to remove the skin because it is thick and sometimes bitter tasting. Other reasons may come down to cleanliness, but it’s easy to clean the outside of the eggplant before preparing to cook it.

By removing the skin, you risk losing out on a lot of nutrients like fiber. Whenever possible, you should try to keep the skin on your eggplant to enjoy in any dish.

Eggplant flesh is generally sweeter, which balances the bitterness that can come with eating the seeds themselves.

Once you pick the right dish, it’s easy to make the whole thing taste delicious. Eggplant can be a great alternative in vegetarian dishes as a meat substitute.

It takes on any flavor you want it to, and it is good for you!

The Benefits Of Eggplants

As a vegetarian, one of my favorite vegetables to cook with is eggplant. I love how versatile it is and how easily it takes on whatever flavor you introduce to it.

Since becoming a mom I am always making sure that we are cooking the best and healthiest meals to share with our toddler, and she loves eggplant just as much as we do.

Now that we know we can safely consume eggplant seeds, let’s talk about what eggplants do for us.

Eggplant has been known to help prevent heart disease in men and women.

Anthocyanins, which are the pigments that give eggplants their purple hue, have antioxidant properties linked to anti-inflammation, which can help those who suffer from inflammation such as arthritis.

Another, called nasunin, is particularly good at fending off free radicals, and protecting cells from damage that can lead to premature aging and disease.

Eggplant has chlorogenic acid, which supports immunity through its antimicrobial and antiviral activities.

A cup of eggplant also provides about 10% of the daily target for manganese, a mineral that helps produce collagen and promote skin and bone health. Eggplant also has smaller amounts of folate and other B vitamins, potassium, and vitamin C.

Does Cooking Eggplant Take Away The Health Benefits?

Eggplant isn’t a veggie that you can just slice up and call a sandwich, it’s much better to enjoy this distinct vegetable when it’s been cooked thoroughly.

Luckily, cooking eggplant doesn’t take away any of its amazing health benefits! Sometimes cooking the eggplant can actually increase the benefits when added to certain dishes.

Who knew eggplant had some much to offer? The best part is how versatile they can be when incorporated in any dish, and you can feel good doing so.

Overall, this purple vegetable is an important staple in anyone’s diet!

How To Easily Remove Eggplant Seeds

Eggplants are one of the seediest vegetables out there. If you slice into an eggplant, you will find hundreds of tiny seeds in the white flesh.

Eggplant seeds are completely safe to eat, although different varieties – and the ripeness –  of eggplant will affect how the seeds taste.

There are easy ways to remove the seeds from the eggplant before cooking or for eating the seeds on their own.

Sometimes it could benefit a dish if you remove the seeds from the eggplant. Cutting an eggplant in half and scooping out the seeds is one easy way to quickly remove the seeds, although this will potentially cause you to lose some of the vegetable itself.

Another option is to cut the eggplant into cubes, add them to a steamer with some salt, and once the eggplant is soft you can mash it into a colander to rinse the seeds out.

How To Pick The Best Eggplant Seeds

As mentioned above, eggplant seeds hold a lot of the health benefits found in eggplant itself. Unlike most fruits and vegetables, eggplant seeds are completely edible and nutritious.

While they may not be for everyone, you may find that you enjoy them if you find the right eggplant with the best tasting seeds.

When choosing the best eggplant to eat the seeds, be sure to select a younger eggplant from your garden.

Younger eggplants have larger seeds that taste better, and it makes it easier to remove the seeds.

Once the eggplant is mature, the seeds are smaller and may start to turn brown, which makes them taste more bitter.

What To Look For When Preparing Eggplant Seeds

It is completely normal to see some brown spots around the seeds of the eggplant, but if you cut into your eggplant and notice that the seeds are black, it would be wise to throw it all out.

Black seeds are a sign that the eggplant may have been sitting around for too long and could have some harmful bacteria on it.

If you cut into the eggplant and the flesh is more brown than white, the eggplant could be close to spoiling and should be thrown out.

Raw eggplant seeds may be a little tough to consume on their own and considered slightly bitter, it’s always best to cook the eggplant seeds if you choose to enjoy them this way.

Even though eggplant seeds are more palatable than most vegetables, they blend into dishes better when they’re cooked thoroughly.

How To Prepare Eggplant Seeds

You can bake the eggplant seeds similarly to pumpkin or sunflower seeds. Once separated, the seeds can be sprinkled with some salt and other spices, and baked until they have a toasted flavor.

Cooked eggplant seeds could be delicious sprinkled on top of salad, pasta, or roasted veggie bowls.

It’s great to see that not only is eggplant so versatile, but that the different parts of the eggplant can be used in so many different ways!

How To Store Eggplant Seeds For Planting

Mature eggplant seeds are best for saving to plant in the spring. Once the eggplant’s skin starts to turn brown, set it aside for about a week until it turns soft.

You can easily slice the eggplant and remove the seeds this way.

Once the seeds have been separated from the flesh, allow them to soak in a cup of water.

The best seeds will sink to the bottom, separate the seeds that are floating and dry the ones that have sunken to the bottom.

Pat the seeds dry and be sure to lay them in a single layer on a towel or plate for at least 24 hours to fully dry out.

Once completely dry, place the seeds in an envelope or airtight container with date and variety labeled.

The seeds can be stored for up to three years until you’re ready to plant them in your own garden to grow your own eggplant.

Once spring rolls arout, you can start your eggplant seeds indoors with a plan to plant them in the ground about 6-8 weeks after your last frost.

Eggplants thrive with a warmer climate, so it’s important to be sure the threat of frost is gone before planting them in the ground.

Keeping them in a sunny environment with lots of water will ensure that your eggplants will thrive!

Do Eggplants Cause Inflammation?

There’s a common misconception when it comes to eating eggplants. You may have heard that eating eggplant can lead to something called “nightshade poisoning,” this is false. Eggplants are in the nightshade family of vegetables.

Plants in the nightshade family — which also includes potatoes, peppers, tomatoes and tomatillos — contain an alkaloid called solanine, which in very large doses can be poisonous.

It’s important to note that steaming, boiling, or roasting nightshade vegetables can help lower the alkaloid content by about 40-50%.

When you avoid the entire group of nightshades, you lose out on the anti-inflammatory and other nutrients they provide.

While we now know that eggplant seeds are edible, they may not be for everyone. This unique vegetable has a lot to offer, and can be prepared in so many different ways – with or without seeds.

With all of the different options to cook eggplant, you will be sure to find the perfect dish for you.

Whether it’s in a salad, pasta, or just roasted with some delicious spices, there’s a possibility for anyone.

However you choose to enjoy eggplant, you can feel good about including it into your family’s diet.

Challenge yourself to learn a new recipe that includes eggplant and see how you enjoy it.

Once you feel comfortable preparing eggplant in many different ways, we hope you find new ways to enjoy the seeds themselves.

Hopefully you’ll feel comfortable saving the seeds for your own garden one day, you may find that growing your own eggplant makes it even more enjoyable!