Can You Eat Frozen Spinach Without Cooking? [Precautions] 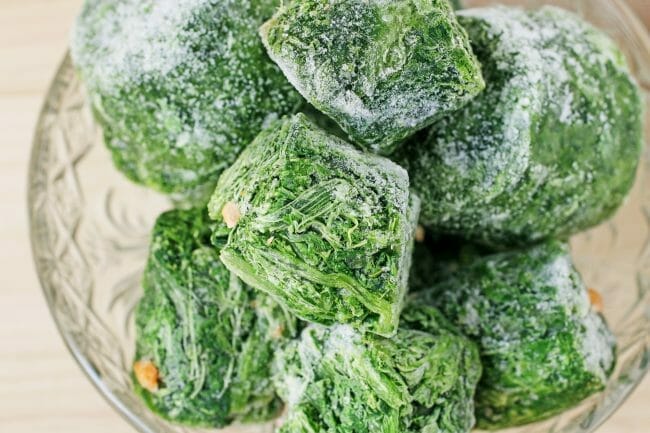 “I’m strong to the finish ‘cause I eats me spinach!” Popeye the Sailor Man was quite the aficionado of this leafy green. Brimming with folate, iron, calcium and vitamins A, C and K, this nutrient rich vegetable is a spectacular part of any diet. However, it is also regularly paired with the word ‘recall’. This leads many to question if you can eat frozen spinach without cooking it first. Don’t leaf without all the details!

Frozen spinach is prepared by blanching and then flash freezing it. This preserves it for up to a year in the freezer. However, while this process kills most bacteria, it does not always kill everything.

This is why the manufacturers of this frozen superfood instruct consumers to always cook the spinach in the microwave or on the stove-top prior to consumption. They also specify that thawing should not be a part of the preparation of frozen spinach. In fact, when done incorrectly, it can actually lead to bacteria growth.

Fresh is always best, right? Before you head to the produce section in the supermarket, take a second look at the frozen spinach in the freezer aisle. Surprisingly, research conducted at Penn State University found that due to the fact that this product is flash frozen, it actually retains MORE nutrients than the fresh varieties! In fact, “the cooler temperatures retained more nutrients for a longer period of time.”

Additionally, spinach is 93% water. This means one cup of blanched frozen spinach is going to pack a lot more nutrients than a cut of the fresh stuff. While it is nice to get this added hydration built into your meal, unless you were planning to use the spinach for a salad, you were likely going to cook it anyways. Thus, reap the benefits of the frozen varieties!

How Frozen Spinach Is Prepared

Blanching is a method of food preparation that involves scalding fresh vegetables for a specific time frame in boiling water. Then the produce is placed in a cold water bath to stop the cooking process. Frozen spinach is made using this method and then it is flash frozen.

According to food preservation experts at Clemson University, “Blanching stops enzyme actions which otherwise cause loss of flavor, color and texture. In addition, blanching removes some surface dirt and microorganisms, brightens color and helps slow vitamin losses. It also wilts greens and softens some vegetables (broccoli, asparagus) and makes them easier to pack.”

Essentially, this ensures that the products stay fresh for longer, prevents them from browning and retains their nutrient values in the freezer. This is a recommended step for individuals who want to freeze their fresh spinach as well.

However, these specialists go on to also note that “blanching vegetables before freezing them is critical to their quality, but not their safety.” This is an extremely important clarification.

Unfortunately, spinach tends to fall under this umbrella of regularly recalled foods. Listeria, E.Coli and Salmonella are all bacteria that seem to thrive on this healthy vegetable. Why is this?

Unlike other fruits and vegetables, spinach and other leafy greens do not possess any other skin or rind to ward off microorganisms that appear in nature. Bird’s poop over open fields. This can cause both the spinach and the irrigation supplies to become easily contaminated.

These factors make this type of produce more at risk. It “gives bacteria countless entry points. A bunch of spinach has tons of nooks and crannies for the nasty stuff to hide, making leafy greens far more vulnerable than other thinly-skinned, yet solid and easily washed produce, like tomatoes.” This, in turn, leads to a higher prevalence of dangerous bacteria.

Blanching Is Not Always Enough

Multiple European countries experienced a deadly outbreak of Listeria tied to blanched frozen vegetables (bfV) between 2015 and 2018. Research conducted to investigate the issue found that “evidence of food-borne outbreaks shows that L. monocytogenes is the most relevant pathogen associated with bfV. The probability of illness per serving of uncooked bfV, for the elderly (65–74 years old) population, is up to 3,600 times greater than cooked bfV”.

More interestingly, they conducted experiments “using vegetables previously heated (e.g. blanched or an equivalent heat treatment) [which showed that] the pathogen seems able to grow faster in heat-treated vegetables”. This means that the initial blanching process does not fully eliminate this type of dangerous bacteria, making the need for cooking your frozen spinach even more imperative. This can be due to a variety of factors.

These can include quality control practices at the facility as well as where the manufacturing plants reside. 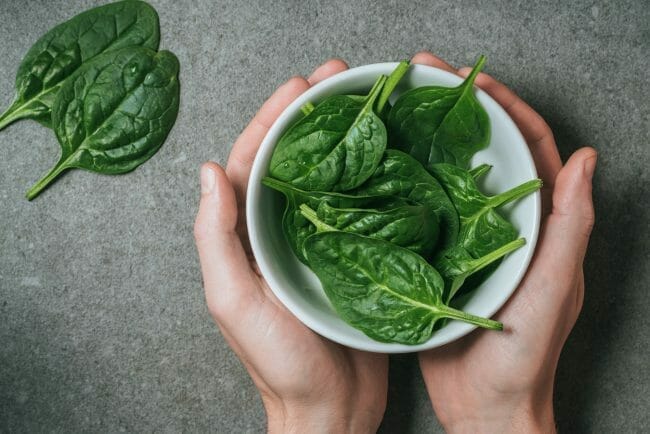 The required time for the blanching of spinach is normally only 1.5 minutes. Interestingly enough though, research shows that “as altitude increases and atmospheric pressure decreases, the boiling point of water decreases.” What does this mean? Manufacturers need to extend the cooking time!

This means that manufacturing facilities that are located in the mountains or at exceptionally higher elevations should make modifications to their preparation regulations. Unfortunately, there are federal standards that are in place that producers must abide by in order to pass inspections. This can lead to problems when the right conditions are in place.

This is another reason why you should never eat frozen spinach without cooking it first!

Freezing Does Not Kill Bacteria

Moreover, “freezing does not destroy these bacteria. E. coli [can] survive [in both] refrigerator and freezer temperatures.” This is also the case for Salmonella and Listeria. Contrary to popular belief, freezing does not eliminate the threat of bacteria. Instead, it renders it inactive until you thaw it out.

Thus, if contamination occurs in the packaging stage of production, the bacteria will stay dormant until you pull it out of the freezer. This is why it is so incredibly important to not eat frozen spinach without cooking it first.

Instructions Are In Place For A Reason

Many individuals will tell you that you can eat frozen spinach without cooking. This is a false statement. One that can lead to some detrimental consequences.

In fact, many frozen spinach manufacturers, like Green Giant, include phrases like “MUST COOK THOROUGHLY” directly on the packaging. The instructions are there for a reason! The company goes on to note “FOR FOOD SAFETY AND QUALITY, FOLLOW THESE COOKING DIRECTIONS. Before eating, cook thoroughly to at least 165 degrees Fahrenheit.”

This guideline is in place because cooking foods for 15 seconds or more at temperatures above 160 degrees will kill both Salmonella and E.Coli. Conversely, Listeria requires a longer cook time of at minimum 30 seconds.

Additionally, take note of the character attributes of the words. Grade school teachers taught us that when words are CAPITALIZED and bolded, the writer is putting an emphasis on their importance. Pay attention to the packaging and follow the explicit instructions! 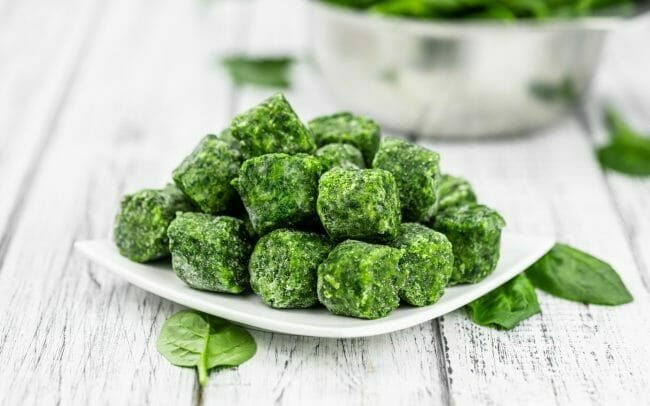 By skipping the cooking process, you risk food poisoning. That is why you continue to see companies recalling frozen spinach products. There is a possibility of these types of infections.

Most recently, “Sprouts Farmers Market of Phoenix, AZ [recalled] Frozen Cut Leaf Spinach conventional and organic 16oz bags, manufactured by National Frozen Foods of Oregon, because it [had] the potential to be contaminated with Listeria monocytogenes, an organism which can cause serious and sometimes fatal infections in young children, frail or elderly people, and others with weakened immune systems.”

This occurred in 2019. However, other countries have noted recalls as recent as March of 2021. The United States produces the majority of its spinach domestically. However, Mexico and Canada import a small percentage of this product into the country. This makes it even more dangerous to eat frozen spinach without cooking it.

It is also imperative to remember that if there was no threat, there would be no recalls. While the likelihood is small, would you risk it?

Proper storage temperatures of zero degrees Fahrenheit or less are imperative for ensuring that all frozen products stay fresh. However, even when taking these measures, contamination can still occur. If you notice color changes, strange smells or a high prevalence of ice on the spinach, it is best to throw it out. Moreover, the USDA advises that consumers “discard foods that have been warmer than 40 °F for more than 2 hours”.

If you do choose to thaw the frozen spinach before cooking, make sure to do it in the refrigerator, a cold water bath or in the microwave. This will ensure that new bacteria doesn’t form. Then, when preparing frozen spinach, read the package carefully. Also, make a point to look for recalls before using any product. This is especially important with foods that have a higher prevalence of contamination like spinach.

If a recipe calls for cold spinach, take the initiative to cook it and then allow it to cool to the optimal temperature. While this takes a little longer, it guarantees the safety of your signature spinach and artichoke dip and the green smoothies you love to start your morning with each day!