Can You Eat Ostrich Eggs? [Plus Opening And Cooking Instructions] 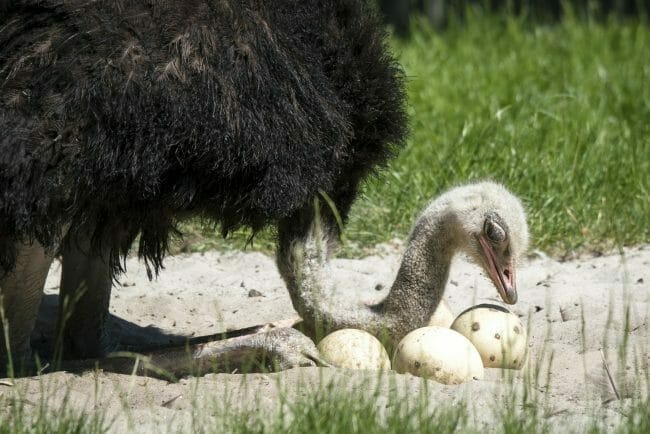 If your family can eat 18 eggs in one sitting, you may have wished for one giant egg to feed them with.

As it happens, the largest egg, the ostrich egg, is good to eat, although it may be hard to come by depending on where you live.

This giant egg is equivalent to about 20 chicken eggs and has a very hard shell.

Ostrich eggs are very nutritious and taste a little more buttery and intense than chicken eggs. Just like a chicken egg, you can boil, scramble, fry, or make omelets from ostrich eggs. The shell is much harder, so you may need to open it gently with a hammer instead of just cracking it on the side of a dish. Because it is so big, you will need your largest pan for cooking the ostrich egg.

Keep reading for information about the nutritional value of ostrich eggs, how to use them, and some recipes to try.

One ostrich egg has almost 2000 calories, so you may want to share this food with the whole family.

Ostrich eggs are high in B12, riboflavin, folic acid, and have more iron and magnesium than chicken eggs. They are naturally low in sodium.

These giant eggs also have high amounts of calcium and omega-3s. All around, an ostrich egg is a healthy choice for your breakfast or breakfast-for-dinner.

Ostrich eggs are the largest eggs laid by any bird. An ostrich egg weighs about 3 pounds and is comparable to the size of a canteloupe.

Where To Get An Ostrich Egg

Ostriches are exotic birds, and you won’t find their eggs at a regular grocery store. Instead, check and see if there is an ostrich farm or exotic game ranch in your area.

You can also look for a market that specializes in wild and exotic meats. One ostrich egg generally sells for $30-$45. You may face a price tag of $100 or more depending on shipping.

When you start to use your ostrich egg, you won’t be cracking it open like a chicken egg. It is too big, and the shell is too thick.

Use a drill and drill a ½ inch hole in one end of the egg and a smaller hole in the opposite end.

Insert a wooden skewer or a chopstick into the larger hole and whisk the egg around, scrambling it in the shell.

Then you can blow the scrambled egg out of the big hole into a bowl and use it in your cooking.

This method allows you to save the shell for another project if you are crafty.

Use a serrated bread knife or a hacksaw and score a line around one end of the egg.

Then take the egg and break it open into a bowl.

Have another person hold the egg on a folded towel for stability. Using a hammer and a small pick or knife, cut a circle around the small end of the egg.

When you tap the knife into the shell, twist it a bit to spread the crack. When you get all the way around, you should be able to lift off the end and pour out the egg into your bowl or pan.

You can cook an ostrich egg pretty much any way that you would cook a chicken egg. It is just a grander scale.

You can cook the ostrich egg in batches to make it easier to handle. A regular chicken egg is about ¼ cup, so the equivalent 3 scrambled chicken eggs would be ¾ of a cup of ostrich egg.

You can boil ostrich egg if you have a large enough pot. Add salt to the water to help break down the shell as it boils.

It takes about 90 minutes to make a hard-boiled ostrich egg, so keep an eye on the water to ensure that it doesn’t boil away.

An ostrich egg’s texture is different from a chicken egg, so those who are experienced with cooking ostrich eggs do not recommend soft-boiling these eggs because soft-boiled ostrich eggs are gelatinous and unpleasant.

Scrambling an ostrich egg is probably the easiest way to handle an egg of this size. You can scramble the egg in a bowl and then cook it in manageable-sized batches.

Try scrambling a small batch of ostrich egg. Measure out 1 cup of beaten ostrich egg. Next, whip it with a whisk to aerate it and blend it smoothly.

Whisk into the egg ½ tsp salt, black pepper to taste, and ⅓ cup of heavy cream. The cream is the magic ingredient that makes all the difference in scrambled eggs.

In a non-stick skillet, melt a tablespoon of butter over medium heat. Pour in the egg mixture and let it cook for a few minutes until the edges start to set.

Use a rubber spatula to fold the eggs gently as they cook to move the uncooked egg to the skillet.

Remove from the heat as soon as the eggs finish cooking, so that they don’t overcook and dry out. Top with a sprinkle of your favorite cheese.

If you are determined to make an over-easy ostrich egg, you will need a large pan. Due to the size, it is challenging to flip an entire fried ostrich egg. Try using 2 large non-stick skillets.

In the first, heat your favorite oil. Carefully pour the egg into the pan. Pour the white first, then ease the yolk into it.

Sprinkle with salt and pepper and cook for several minutes as the whites set up. You can stir the egg white a little bit to help it cook, but not too much or you get scrambled egg white.

When you are ready to flip the egg, grease your second pan, then lay it upside down on top of the egg.

Holding tightly to both pans, flip the egg into the new pan. Celebrate once you have flipped the egg to the new pan!

Cook until the egg whites are thoroughly cooked, then add salt and pepper to taste. Serve to your entire family with a stack of toast.

However, if you have a large enough pan and determination, you can make one large ostrich egg omelet.

For one giant omelet, whisk the ostrich egg and ⅓ cup of heavy cream to thoroughly blend the yolk, whites, and cream and aerate the mixture.

In a large skillet, melt 3 tablespoons of butter over low heat. Carefully pour the omelet mixture into the pan and cook until it begins to set.

Use a spatula to loosen it around the edges. When it has set enough to flip, use your spatula (or 2 spatulas) to flip it to the uncooked side.

Add ½ cup of shredded cheddar cheese on top of the omelet. Poke through the egg with a spatula to ensure it is cooked all the way through.

Fold the omelet in half and move to a plate. Sprinkle with thyme, salt, and pepper to taste.

Maybe you want to try something a little more fancy with your Ostrich egg. Check out this video of the Chef at Fine and Rare NYC making their amazing meal featuring an ostrich egg.

Be inspired by their creativity and make a similar meal for your family with your favorite breakfast meats and roasted veggies.

Recipes call for chicken eggs when baking. And, while an egg is an egg, the recipes we use are designed for the chemistry of chicken eggs.

One study in the Journal of Food and Nutrition research found that chicken eggs produced the best cakes in terms of height, crumb color, and stability of the egg white.

The ostrich eggs made cakes very similar in appearance to chicken eggs, although they were denser.

The authors of the study did not discuss the flavor of the cakes based on the eggs used.

Since the taste of an ostrich egg is buttery, it would be a good choice for a pound cake.

These cakes are already dense and buttery, so substituting ostrich egg in place of chicken eggs will only increase the flavor.

Consider baking a cake inside the shell if you used the drill method and saved the ostrich eggshell.

Rinse it completely and let it dry. Choose a cake batter that doesn’t expand too much, like a coffee cake or a pound cake.

Carefully pour your batter into the ostrich eggshell and bake. Be sure to test the middle of the cake to ensure it is baked all the way through.

When you serve it, provide a mallet for your guests to use to break off the shell. Offer dipping sauces or fruit compote to top the cake with on their individual servings.

Don’t bury your head in the sand when it comes to using ostrich eggs in the kitchen. If you come across one, have some fun with a giant omelet or an over-easy meal for 6, then bake your dessert right in the shell.

These giant, nutritious eggs will add a fun, special treat to your regular egg routine.