Can You Eat Peanut Shells? [Plus Best Ways To Cook Them] 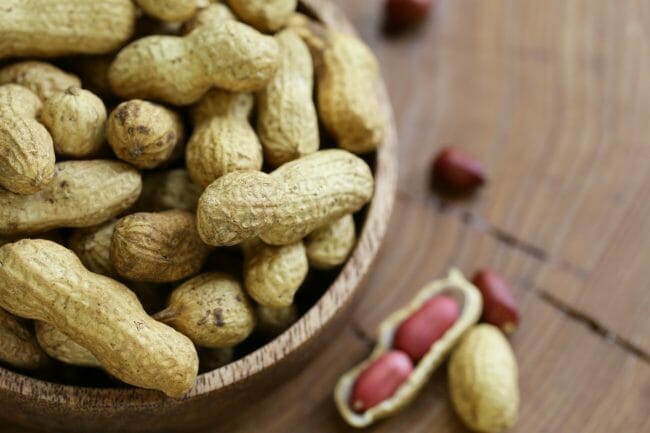 Boiled, salted, roasted. There are so many delicious ways to enjoy peanuts that the choices seem endless.

While peanut butter and jelly is a staple in the American diet, other countries also use peanuts in dishes like pad thai or chicken satay.

With so many options, you may be wondering if any of these delicious foods use peanut shells. The actual nut is tasty, but what about the shell? Can you eat peanut shells?

Yes, you can eat peanut shells. They will not harm your body. But they offer little or no nutritional value and can be tough to digest. Most cultures do not eat peanut shells or use them in cooking. Peanut shells are edible but not very tasty.

Can You Eat Peanut Shells?

You can eat peanut shells, but I’m not sure why you would want to eat them. Peanut shells are mostly fiber in the form of cellulose, which our bodies have a hard time breaking down.

Eating peanut shells would be like eating tree bark or twigs. They’re not really going to hurt you, but they’re tough to chew and won’t taste that great going down.

Peanut shells can have jagged edges, which may scratch or be unpleasant as you eat them.

Your stomach doesn’t digest peanut shells very well, so this discomfort can persist throughout your entire digestive system until they eventually make their exit.

If you eat a lot of peanut shells, you may end up getting blocked up with fiber. High-fiber foods generally help our digestive system but solidifying the waste that needs to get out. But too much fiber can create a blockage that is quite uncomfortable.

You should be wary of eating peanut shells that have been treated with pesticides or other chemicals.

Most growers assume that consumers will discard the shells, so they don’t take any special precautions.

The shell does a good job of protecting the peanut inside from these chemicals. However, if you decide to eat the shell, you may be getting harmful pesticides along with it.

To be safe, look for peanuts that have not been treated with pesticides or harmful chemicals. You may even try growing your own!

What Is In Peanut Shells?

Peanut shells are made up of mostly cellulose. Plant cell walls consist of cellulose. So while not the exact same substance as tree bark, twigs, or grass, all of these items have the same basic structure as peanut shells.

They are also not easily digested by people and are generally not eaten. Peanut shells are also made of lignin, which helps the shells stay firm and structured.

When we eat cellulose and other indigestible parts of plants, it provides us with fiber. This is a necessary part of the human diet because it binds together the other waste products that eventually make their way out of our bodies. Without fiber, that entire process is much less efficient.

But too much fiber can cause blockages and make us uncomfortable. Because they are so high in these materials (and not much else that we can use), peanut shells cause blockages faster than other plants when eaten often.

If you do choose to eat peanut shells, you may be wondering which type of peanuts have the most edible or tastiest shells.

There are countless dishes with peanuts as an ingredient. If you are looking for peanuts in their purest form, here are a few ways that you can find them.

Roasted and salted peanuts are pretty common throughout the United States.

Boiled peanuts are popular in the South (Virginia to Georgia), while deep-friend peanuts are definitely a regional Carolina treat.

Can You Eat Boiled Peanut Shells?

Boiled peanuts are one of the best and easiest ways to eat peanuts. You can find boiled peanuts at almost any store or even try to make them at home. They are as simple as they sound–boil the peanuts in water until they are soft.

Most people open the shells to get to the deliciousness inside, but some do eat the shells.

Boiled peanut shells tend to be a little bit softer than raw peanut shells, but still tough to chew and full of fiber.

Boiling peanut shells can cut down on the hard, jagged edges by softening the shells. If you like peanut shells, this can be one of the best ways to eat them without worrying about scratchy foods.

Can You Eat Roasted Peanut Shells?

If you love salty snacks, roasted and salted peanuts should be on the top of your list to try. They are delicious and easy to eat.

Many even come with added seasoning and flavors. Most of the time, the salt and seasonings are added to peanuts after they are roasted and removed from the shell.

But you can add salt to the shells themselves and eat them, similar to a chip or pretzel.

The same general guidance applies to eating roasted peanut shells. Yes, you can eat them. But be careful of eating too many, as it may back up your digestion.

Can You Eat Fried Peanut Shells?

You can deep fry just about anything and peanuts are no exception. Deep-fried peanuts include the shell and are one of the best ways to eat the shells.

Deep-frying introduces salt and fat to the equation, two things that make them delicious but not the healthiest option out there. It’s best to eat these as a treat rather than your go-to snack.

The shells will still be pretty tough, which may take some getting used to for those who are more accustomed to shelled peanuts.

The same potential concerns exist: possible blockage or backup and addition of pesticides.

Just make sure to keep your deep-fried peanut consumption to a reasonable amount and you’ll be able to enjoy this snack without any guilt or worry.

Deep-fried peanuts are common in North and South Carolina, but you can also order them online or make your own. Just be sure to follow some deep-frying safety guidelines!

Can You Eat Salted Peanut Shells?

Yes, you can eat salted peanut shells, but this is one of the least common ways to eat the shells. Why?

Because without the addition of deep-frying or roasting, there’s not a great way for the salt to actually stick to the shell.

Eating salted peanut shells won’t harm you (unless you eat a lot or eat some with pesticides) but they don’t offer much in the way of taste or enjoyment.

Can You Eat Peanut Shells While Pregnant?

Peanuts are a fantastic food to eat during pregnancy. They have tons of folate (good for baby’s brain development) and protein (good for overall development).

As long as you don’t have an allergy or aversion, including peanuts in your pregnancy diet is a great idea.

You can eat peanut shells during pregnancy, but they may not be the best choice. They don’t offer a lot of nutritional value since your body can’t digest them well.

If you are prone to getting digestive issues during pregnancy, introducing food that can further back you up won’t help.

Stick with the edible, enjoyable parts of the peanut that will help your baby grow and develop while satisfying that salty craving you may have.

If you want to give peanut shells a try, most people who eat them prefer them as a salty snack. Here are a few recipe ideas to try at home or look for at the store.

Deep-frying is one of the best ways to cook and eat peanut shells. Popular in the Carolinas, you can find deep-fried peanut shells online that can ship to your home.

If you want to try making them yourself, follow these simple steps to start enjoying deep-friend peanuts.

1.Heat peanut oil in a large pot. You can use other types of oil, although peanut oil is the most popular.

2.Fry peanuts for about five-six minutes or until crispy.

3.Remove peanuts from oil with a slotted spoon.

4.Place peanuts on a paper towel to drain.

5.Salt liberally or coat with other spices.

You can also roast and salt peanuts whole, then eat the shells and the peanuts inside.

Some people like to do this to get the salty crunch, then spit out most of the shell.

What Nuts Are Better To Eat Than Peanut Shells?

If you like the crunchy and salty texture of peanut shells, you can also try other nuts with shells that are easier to chew and digest.

Seeds are another alternative that can be better on your digestion while still providing the same flavor.

Sunflower seeds are the closest to peanut shells while being much easier to eat.

Do You Eat Peanut Shells?

Even though the general guidance is to avoid eating peanut shells, there are still plenty of people who enjoy this dish. Many of them are quick to share their reasoning and experiences online.

Can You Eat Peanut Shells–Reddit

The crowd-answering platform Reddit was full of replies to questions about eating peanut shells. Some of the most memorable responses include:

“I never got the point of “salted peanuts,” when the salt is on the outside of the peanut shell and you’re supposed to break them open and eat the unsalted inside? Why even salt them then? The outside is where the delicious salt is.”

“I do it with sunflower seeds but not with peanuts.”

“What are you, an elephant?”

It seems that even on the internet, people are divided about eating peanut shells.

Some love them, some could go either way, and some aren’t even sure why eating peanut shells is open for discussion.

Can You Eat The Entire Peanut Shell?

If you’re going to eat peanut shells, you can eat the entire thing. The peanut shell is homogenous, meaning that it is the same throughout. There is not a particular part that is more or less edible or that tastes different.

Some people do like to chew on whole peanuts, then spit out the shells. This allows them to get every tasty bit of salt without having to actually consume and digest the shells.

If you go with this method, you’ll likely get small bits of shell into your digestive system but not enough to really make a measurable difference.

Peanut shells are edible but don’t offer much beyond that. They don’t have nutritional value, are hard to digest, and may cause blockage due to their high fiber content or damage due to pesticides.

If you are looking for a delicious, salty snack, it’s best to stick to roasted or salted peanuts for both flavor and ease of digestion.

You can eat peanut shells but most of us opt for delicious and nutritious peanuts themselves instead.

Katie is an experienced writer, who wrote for big magazines like The Spruce. She is also a mom of three (Sebastian, Lincoln, and Hannah). In her spare time, she likes to read, day hike, and explore hidden gems around her home in North Carolina. You can connect with Katie on Instagram @katiebwriter or her website, www.katiemelynnbegley.com.