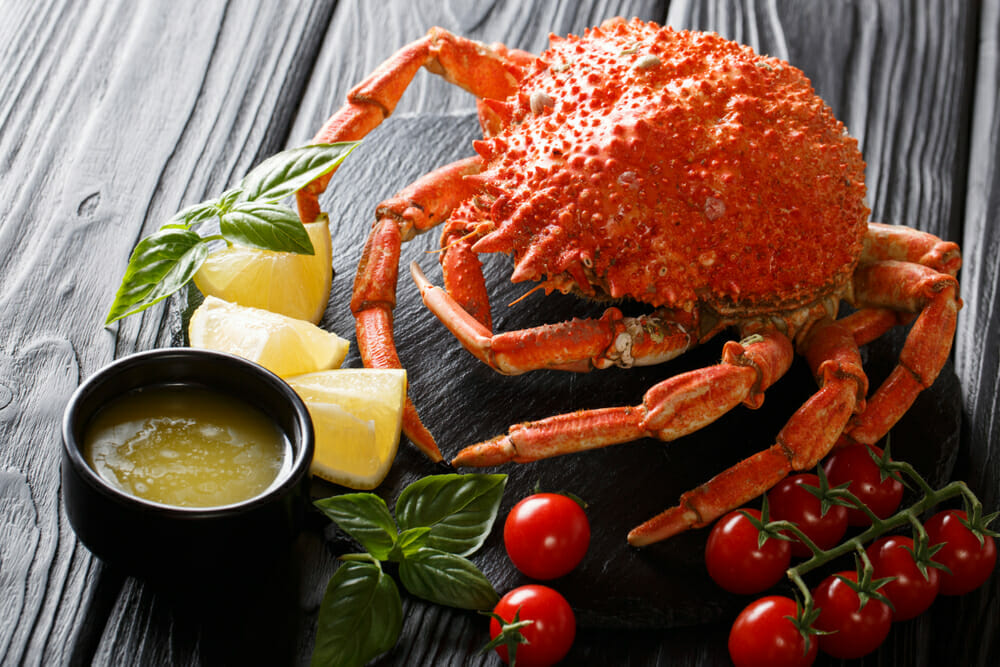 You have been exploring your seafood options and have discovered the mysterious and somewhat creepy-looking spider crab.

There are multiple species of spider crab found around the world from the tiny kelp crab found along the North American Pacific Coast to the Giant Japanese spider crab that can grow to 12 feet from claw to claw!

Some people debate whether or not these crabs are edible, but in fact, they are.

Spider crabs are not only delicious but the meat is even sweeter than that of other crabs. It is typically prepared by boiling. Spider crabs you can dip in butter or pick out the meat and make crab cakes, creamy pasta dishes, and crab rolls.

Keep reading for details about these amazing creatures, how to catch and prepare them, and recipes for using the meat.

The basic way to cook a spider crab is to boil it in salted water. The water should have enough salt in it to taste like ocean water.

Bring the water in a large pot to a boil, and gently lower in the freshly killed crab into the boiling water. Cook it for 20 minutes per pound.

Another option is to boil the crab in a rich broth of garlic and spices.

Add a couple of cloves of garlic, a chopped onion, celery, and bell pepper, to deepen the flavor of the crab as you cook it.

Once the crab is cooked, you will need to break down the crab to remove the meat. The shells of spider crabs are thicker than other species, you may need a heavy-duty knife and hammer to break it apart.

Remove the legs by laying the crab on the back and twisting them inward. Break and lift off the underside shell and remove the gills (sometimes called dead man’s fingers) and the mustard yellow substance you find in the body.

This is an organ that removes impurities from the crab’s body. Once those organs are out, you can pick out the meat from the body and legs.

Read the recipes below for some great ideas on preparing meals with fresh crab meat.

Crab eggs are clumps of thousands of tiny orange orbs that you find inside the shell of the female crab.

The rich and slightly sweet roe is usually eaten raw, but it is also a famous ingredient in She Crab Soup.

While the roe is delicious, it is very high in sodium and cholesterol, so enjoy it in moderation.

The most popular way to eat crab of any kind is to dip the crab meat in butter and eat it. But that should not be the end of your crab meat adventures.

With a little patience, you can pick the meat out of the crab and use it in a multitude of dishes for any occasion.

Preheat the cooking oil in a frying pan on the stovetop. Start with one pound of your favorite crab meat. Spider crab will be good in this recipe.

Combine all the ingredients completely.

Shape the mixture into palm-sized cakes and fry on each side for 3-5 minutes. Drain on paper towels and serve with lemon wedges and tartar sauce.

Crab is a delightful addition to a creamy pasta dish. After you cook and separate the crab meat, use 1 pound of it in this alfredo pasta dish.

Cook and drain 12 ounces of fettuccine or linguine and return it to the pot.

In a large skillet over medium heat, melt 3 tablespoons of butter and add 3 crushed cloves of garlic. Cook for about one minute, then add flour and stir until golden.

Add 1 cup each of chicken broth and heavy cream and simmer for 3 minutes. Next, stir in 1 and ½ cups of freshly grated parmesan cheese and season to taste with Old Bay seasoning, salt and pepper.

Finally, add the crab meat then pour over the pasta and toss until coated. Garnish with parsley and parmesan.

These sandwiches are like lobster rolls but have more ingredients in the filling.

Start with one pound of your prepared spider crab meat set aside.

Fold the crab meat into this mixture. Serve on split-top rolls with potato chips and pickles.

Spider crabs are found all over the world and come in all sizes. They have round bodies and long spindly legs.

They are slow-moving scavengers that make up for their lack of speed with their long legs. There are crab fisheries and some are wild-caught.

You can catch these crabs by hand in shallow waters by picking them up by their bodies.

These crabs migrate and mate in the spring, so many commercial fisheries ban catching these crabs at this time to encourage the propagation of these creatures.

Species Of Spider Crab For Eating

Many species of spider crab are good for eating. They are found up and down both North American Coastlines, in Australia, and in Britain.

The Portly Spider Crab is found on the North American Atlantic coast from Nova Scotia all the way to Florida.

There are also found in the Gulf of Mexico. This crab’s body is about 4 inches across and its legs are up to 12 inches long.

Some people debate whether these are good for eating. They are not poisonous and it is not harmful to eat them.

However, they are scavengers and they taste like what they eat. Some people report that the ones from Florida taste better than the ones caught around New York and New Jersey.

The European Spider Crab also called the common spider crab or the spiny spider crab lives along the eastern coastlines of the Atlantic Ocean.

A variation of this species is also found in the Mediterranean and around North Africa and as far north as the North Sea.

This is the largest crab found in British waters and therefore is a valuable part of the commercial fishing industry in Britain.

The most famous spider crabs are the Japanese Spider Crabs. These are giants of the spider crab order.

The body of these crabs may be up to 16 inches wide while the legs may grow so long that the width is 12 feet from tip to tip.

They live in the deepest waters of all the knows spider crab species, from 150-300 meters, and may live to be 100 years old.

The Japanese Spider Crab is considered to be a delicacy in Japan. As you might imagine they are difficult to cook and prepare due to their size.

Chefs steam these giants over large pots of boiling water with their legs outstretched. They then have to twist off the legs by hand and pick out the meat.

All of this intensive work leads to a high cost for this meal at the dinner table.

The Giant Spider Crab is commonly found in Port Philip Bay, Australia. It is legal to catch up to 15 of these big guys each day.

However, there is some debate about whether it is worth the effort it would take to cook and eat them.

Some people who have eaten these crabs report that despite their size, there is not a lot of meat on these crabs and that they have a somewhat muddy flavor.

They are not as tasty as their European cousins, although they are safe to eat.

Some people worry that spider crabs are poisonous, but this is an old wives tale. There is nothing dangerous about eating these crabs.

There is also an old wives tale about needing to cook them for a long time, but you don’t need to cook them overlong. It will just ruin the flavor and texture of the meat.

If you are preparing a live crab, you should kill it quickly and humanely before cooking it. You handle a  spider crab the same way that you would a brown crab. Lay the crab on its back so that the belly is exposed.

Use your knife or pick to go straight through the middle of the belly until you touch the other shell You can wiggle the knife side to side to ensure that you completely sever the spinal column.

Be strong and decisive in your movements so that you kill the crab immediately.

Despite their potentially off-putting appearance, you can eat spider crabs.

Based on most people’s experience, the best tasting option with the most plentiful meat is the European Spider Crab found around Britain in the North Atlantic.

Others recommend choosing crabs carefully just before they molt to ensure they are at their largest.

The enormous Japanese Spider Crab is considered to be a delicacy due to how difficult it is to catch and prepare. Give these often overlooked crabs a try.