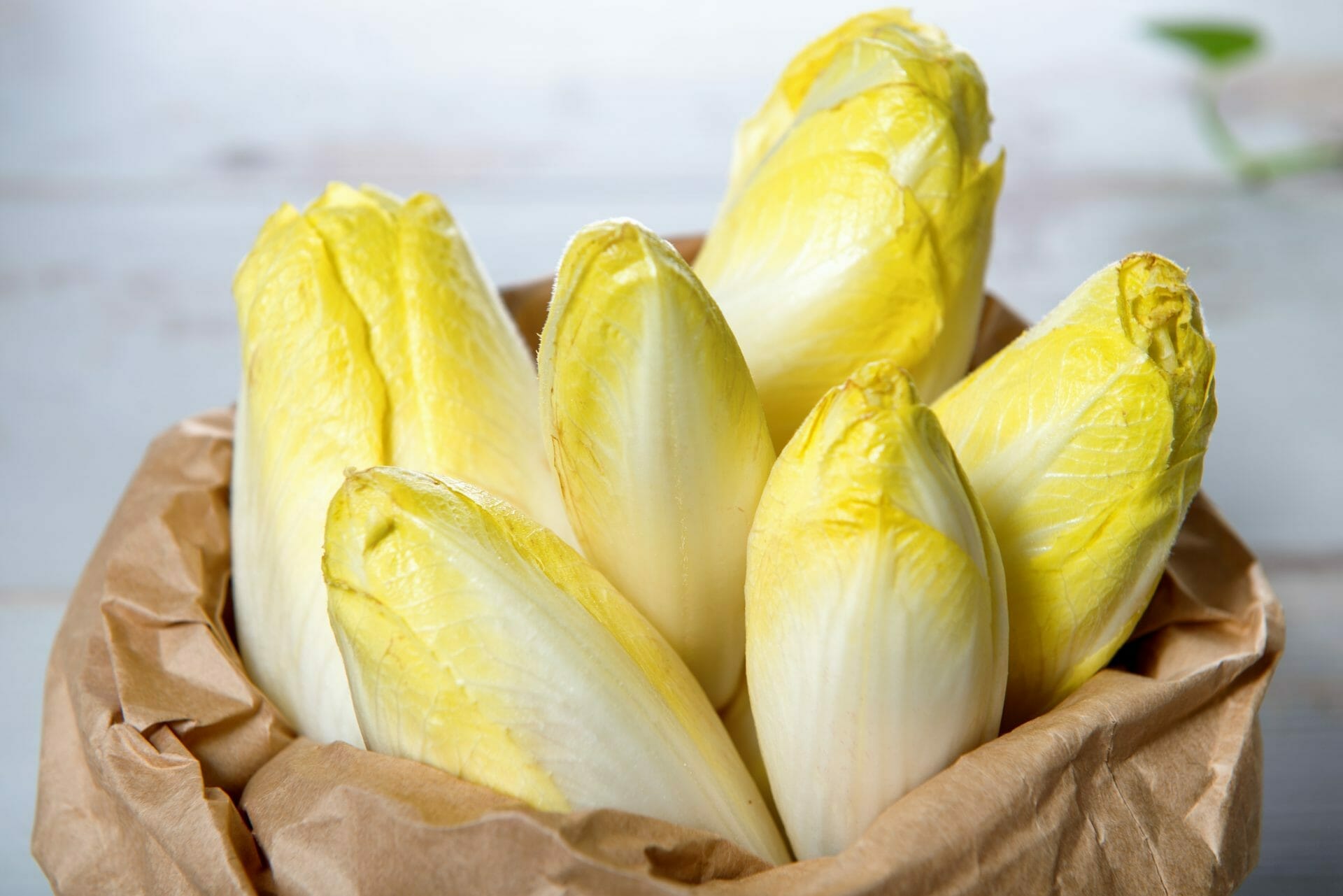 I recently found a recipe for braised endive that looked really good.

The caramel flavors of the roasted veggie sounded amazing and endive is such a low calorie food that I could eat seconds without any guilt!

The only problem was I didn’t have any endive on hand.

Rather than give up on the recipe, I decided to find a good endive substitute. I wanted to make this recipe happen no matter what!

Luckily, there are quite a few endive substitutes that would work well and taste just as great as the real thing.

Can you substitute spinach for endive? Absolutely!

Spinach is a great endive substitute for both soups and salads. Spinach wilts in soup, just like endive, giving you the same soft texture of leafy greens.

It also has a nice mild flavor which is perfect for people who may not like the strong flavor of endive.

Use one cup of baby spinach to replace one cup of chopped endive. One cup of spinach does have more calories than endive with about 30 calories per cup.

It is high in vitamin A and fiber though which makes it a healthy endive substitute.

Kale is often added to soups to boost nutrition and add a little flavor. Kale has a similar bitter taste to endive. It is best when cooked or blanched since the bitter flavor fades.

One cup of kale has about 20 calories and 3 grams of protein. It also contains 2 grams of fiber making it even more fiber rich and beneficial than endive!

Chicory leaves and endive come from the same plant family. This means they have a very similar taste.

Endive leaves are a little tougher than chicory leaves which tend to be softer and tender rather than crunchy and crisp.

Chicory has a high amount of vitamin K, vitamin A and B vitamins. One cup of chicory leaves has 23 calories which is a little more than endive but still a very low calorie food.

Use the same quantity of chicory leaves to replace endive in any recipe. Chicory leaves will cook faster than endive and are best when sauteed rather than roasted.

Escarole is another type of chicory that has a bitter, fresh taste. Escarole is a little bit sweeter than endive so it may be a good kid-pleasing veggie.

Escarole can be wilted and cooked just like endive. It is very often used in Italian cuisine, served as a side, mixed into pasta or tossed in a soup.

One cup of escarole has 93 calories and 6 grams of fiber. It is much higher in calories than endive so keep this in mind when using escarole as a substitute for endive.

Radicchio is a relative of the chicory plant just like endive. You can find red radicchio or green. Both kinds work well as an endive substitute in salad.

Radicchio has that same bitter flavor that endive has. It is crunchy and lettuce-like in texture. Slice a head of radicchio into thin pieces and use it to replace the endive with a 1:1 ratio.

Radicchio is also great braised or roasted. Use it in cooking recipes as a endive substitute.

One cup of radicchio has only 9 calories. It also contains .5 grams of fiber making it a healthy alternative to endive.

Watercress is a small leafy green that is great in salads. It does have a different taste when compared to endive but this can be perfect for those who do not like the flavor or endive.

Watercress is slightly peppery and more tender than endive.

Use the same amount of watercress to replace endive in your salad recipes. One cup of watercress only has 4 calories making it even lower than endive.

It still has lots of vitamin A and C so you don’t have to worry about losing nutritional value with this endive substitute.

Romaine lettuce looks like endive, has a crunch like endive but has none of the bitter endive taste.

This is a great endive substitute for anyone who does not like the powerful flavor of endive. Romaine lettuce is definitely more kid friendly!

Use romaine lettuce hearts that are crunchier and lighter in color. Chop the romaine into strips and use the same quantity to replace endive in your salad recipe.

One cup of romaine lettuce has 8 calories which is exactly the same as endive. It also has a very high vitamin K content which is similar to endive.

Napa cabbage is another common green vegetable that you can use in place of endive. It has a nice crunchy texture and is very easy to find in any grocery store.

The flavor of napa cabbage is very subtle. The leaves are nice and large so they can be used in place of endive as a little bowl.

Stuff those leaves with your favorite chopped salad, like this one from The Reluctant Entertainer, to make a perfect meal!

A cup of chopped napa cabbage has 13 calories. It is a great low calorie, convenient substitute for endive. !

Curly leaf lettuce is often called endive lettuce. While the lettuce is not technically related to endive, it does have the exact same type of curly leaf.

It is a great, mild substitute for endive, perfect for anyone who is opposed to the taste of raw endive.

Curly lettuce is best to use in place of curly endive in salads or raw foods. It does not cook well and will lose all texture and flavor if cooked.

Curly lettuce has just 8 calories per cup. It does not have as much fiber as endive but is still a great, neutral substitute.

Use the same quantity of curly leaf lettuce to replace endive in your salad recipes.

Arugula is a great substitute for curly endive. It has a slightly peppery taste that is similar to the bitter flavor of endive.

However, many people far prefer the taste of arugula to the potent flavor of endive.

Arugula has a similar texture and appearance to endive. It is also best when served cold in a salad, just like curly endive. Use the same quantity of arugula to replace curly endive.

One cup of arugula has just 5 calories so it is very similar to endive in this respect. It also has vitamins A , B6 and vitamin C. Arugula is a fantastic, healthy substitute for endive.

Endive is a young chicory plant that can be eaten raw like lettuce. It has crisp, juicy leaves that are delicious in salads.

Endive can also be cooked, tenderizing the young leaves and making them soft and chewy.

There are several kinds of endive. The most popular are Belgian Endive and curly endive. Each kid is used a little differently so I will cover substitutes for each one!

When eaten raw, endive has a bitter taste. When blanched or cooked, that bitter flavor goes away.
Endive can be a bit of an acquired taste so I tried to include some endive substitutes that are a little more mild and kid friendly.

Endive is very often used in salads. Curly endive is most popular in salad recipes since it has a less bitter taste than Belgian endive. Those curly green leaves are also quite pretty in salad recipes.

Endive is often added to soups. It wilts in the heat of the soup, adding lots of chicory taste in every bite.

You may find recipes for stuffed endive since the boat shaped leaves make great little bowls.

Sauteed endive is a wonderful side dish and grilled endive is also fantastic in the summer. This vegetable is clearly very versatile and useful!

Endives are very healthy. They are a low calorie food that is also high in fiber. Eating endive can help aid in digestion, lower cholesterol and even promote stronger bones.

Endives are high in folate which has been shown to improve brain health. The vitamin A in endive will improve eyesight.

It is a very beneficial food but there are other endive substitutes that are just as healthy!

Here is a quick look at the nutritional facts for one cup of endive. Keep these in mind when looking for an endive substitute.

While I love the crisp, bitter taste of endive, I know that it is not for everyone. Many people may prefer an endive substitute over the real thing.