How to Freeze Gravy with Cornstarch (Storage & Expiration) 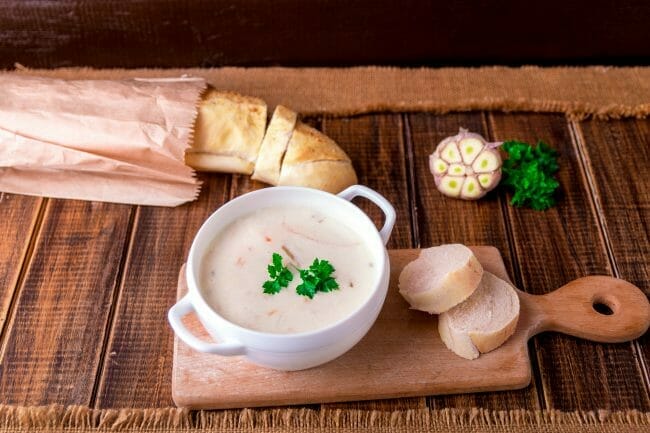 The perfect gravy is rich and meaty with subtle notes of aromatic herbs and spices. The backbone of a good gravy is the meat drippings, stock, or au jus.

This ingredient explodes with a flavor that compliments just about anything you will put gravy on. Once the au jus is mixed in, the gravy gets thickened with either cornstarch or flour.

Gravy is more than a staple on Thanksgiving. It is extremely versatile and goes well with most things.

Gravy is traditionally served with meat and meat-filled dishes, but it’s also served with various vegetables including potatoes.

Gravy is made from broth, stock, or au jus, but the best gravy is made with the drippings of freshly cooked meat.

The fat drippings or broth are often mixed with things like water, butter, milk, or cream. It is simmered and mixed with a thickening agent like flour or cornstarch.

We often differentiate gravy types by noting what kind of meat contributed to the drippings or broth. Is it a turkey gravy, beef gravy, or sausage gravy?

Sometimes we describe gravy in terms of color or even by what kind of thickening agent was used.

Gravy made with cornstarch uses by far the most common gravy thickening agent. Another common way to thicken gravy is by using flour.

When considering to freeze your gravy, make it with flour instead of cornstarch to make the reheating process easier.

What Happens When You Freeze Gravy Made With Cornstarch?

Freezing cornstarch causes its structure to shift from a slightly gel-like texture to a more sponge-like texture.

Cornstarch is an essential component of gravy recipes because it is easy to use and holds up well.

First, if you freeze it and reheat it, your gravy might come out either thinned out or too thick. It also might end up with some extra soupy parts and some thickened parts.

Also, you need to take care when defrosting your frozen gravy made with cornstarch to optimize your results.

How To Freeze Gravy Made With Cornstarch

You significantly reduce issues thawing your frozen gravy made with cornstarch if you minimize the fat you add while you make it.

Additionally, if you want to limit the fat separating from the other liquid ingredients, you can opt for less stock or meat drippings.

To follow through with this step you will need to be proactive and plan before you cook your gravy made with cornstarch.

When you’re ready to freeze your gravy made with cornstarch make sure it is cooled completely.

Your gravy with cornstarch is ready to freeze when you can no longer see steam coming from it. You can cool your gravy but transferring it out of your pot and into a dish that isn’t so hot.

Once your fresh batch of gravy made with cornstarch is cooled, consider sending it through a couple of cycles on your food processor.

Alternatively, you can use your hand electric mixer or a blender. This helps to blend all the ingredients better and cuts back on separation problems when your gravy is reheated.

When freezing gravy made with cornstarch you want to be sure to store your gravy in an airtight container if possible. People sometimes pour their gravy into an ice cube tray for individualized portions.

However, if you don’t have a lid for your ice trays and you want to keep your gravy frozen for a while, use a plastic sealable bag.

Plastic bags are great because they hold up well in a freezer, especially when holding liquids. You can also opt for glass, metal, or plastic containers.

Once you have made, cooled, and stored your gravy, it’s time to freeze your gravy made with cornstarch.

Pop it into a freezer lying flat if possible. Gravy made with cornstarch can be stored frozen for quite a long time.

How Long Can You Keep Homemade Gravy In The Freezer?

Frozen gravy will be in peak condition for up to 4-6 months after freezing. However, after 4-6 months it is still safe to eat.

After 6 months, you may have a harder time reheating your gravy but it is fairly easy to fix the texture issues that come with defrosting frozen gravy made with cornstarch.

How Long Can You Keep Gravy In The Refrigerator?

You can keep gravy stored in the refrigerator for up to 4 days. Some estimate that taste begins to be affected in as little as 2 days.

Freeze your gravy made with cornstarch to preserve it for the longest possible amount of time.

How To Reheat Frozen Gravy Made With Cornstarch

Reheating gravy made with cornstarch takes a little bit of adaptability.

It’s hard to tell how your gravy will hold up when defrosting and thawing but no matter what happens there is a solution. So, don’t fret. Follow these steps and your frozen gravy will be hot in no time.

To thaw frozen gravy made with cornstarch, it is best to transfer your container with frozen gravy into the refrigerator. Allow your gravy to thaw in the fridge which should happen within a day or so.

Sometimes it can be accomplished overnight depending on how much you portioned.

If you’re short on time, you can put your frozen gravy made with cornstarch into a bowl and run it underwater for several minutes to defrost.

When reheating your frozen gravy made with cornstarch, be sure to use gravy that is defrosted.

Add it to a pot on low to medium-low heat. Stir regularly and whisk if separation starts to occur.

If your gravy starts to thin out, add more cornstarch. However, if it becomes too thick, add a bit of water.

If your gravy gets lumpy, also adding water can be helpful. Finally, if your gravy separates stir it rapidly with a whisk until an emulsion forms again.

Can You Freeze Turkey Gravy Made With Cornstarch?

Yes, you can freeze turkey gravy made with cornstarch. In fact, most varieties of store-bought gravy can be frozen and reheated relatively easily due to preservatives.

One thing to consider when freezing turkey gravy made with cornstarch is to avoid freezing gravy that contains milk or cream.

When cornstarch and dairy ingredients, like milk and cream, are combined it causes separation upon reheating frozen gravy.

If you try to limit the amount of turkey fat going into the gravy when you make it, you will cut down on the possibility of changes in texture after freezing.

Can You Freeze Any Sauce Thickened With Cornstarch?

Freezing cornstarch thickened sauces is generally ok to do. However, problems arise when there is a cream-based sauce.

Cream and milk don’t freeze very well because they tend to cause the sauce to separate when being reheated.

Another common issue when freezing sauces thickened with cornstarch occurs when reheating.

Oftentimes, cornstarch-based sauces will either become too thin or too thick while undergoing the reheating process.

To combat a sauce that is too thick, simply add a tablespoon of water at a time while briskly whisking.

To save a sauce that became thin, just add more cornstarch to your sauce mixture and stir regularly.

Can You Freeze Sausage Gravy Made With Cornstarch?

Yes, you can freeze sausage gravy made with cornstarch or flour. Be sure to cool the gravy completely before packaging it up to be frozen.

You can cool sausage gravy by setting it in the refrigerator for a few minutes or by leaving it to cool on the counter.

Once cooled, put your sausage gravy in sealable plastic bags or any airtight container.

Sausage gravy can be enjoyed for up to 3 months from the date you froze it. Consider dating and labeling your freezer bags to help stay organized.

When you’re ready to thaw your frozen sausage gravy with cornstarch defrost by leaving it in a refrigerator overnight then reheat on a stove.

However, when you freeze gravy made with cornstarch, you increase its shelf life to up to 6 months.

It’s easy to defrost and reheat when you need it so follow our guide to freezing your gravy made with cornstarch today.