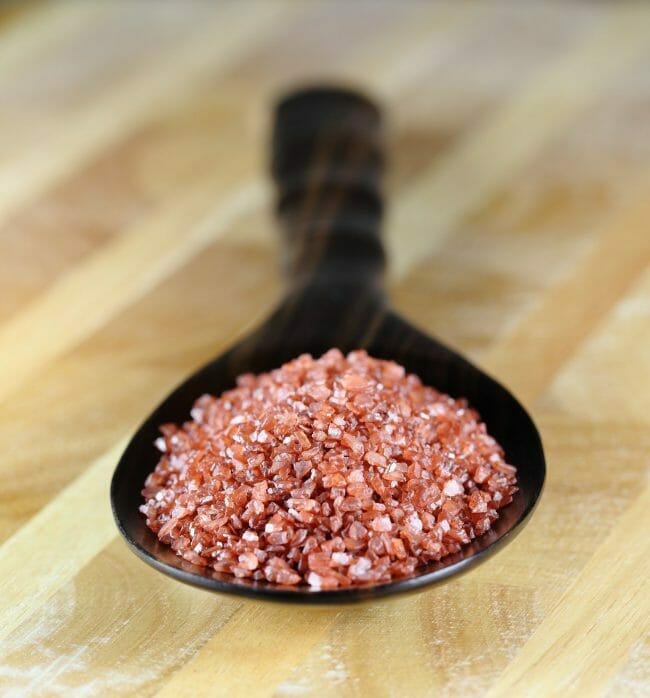 Hawaiian sea salt is that unrefined sea salt mixed with alaea. Alaea is a volcanic clay, rich in iron oxide, among over 80 other minerals. The presence of this alaea gives Hawaiian sea salt its characteristic brick red color, and sometimes, it’s referred to as Alaea salt. It’s almost impossible to make traditional dishes like pipikaula, kalua pig, or poke, without making use of Hawaiian sea salt.

Another beautiful thing about Hawaiian sea salt is that it comes in varieties of colors. If you don’t want to use Hawaiian red sea salt, you can use the black or white variant depending on what you’re trying to achieve.

The Hawaiian white sea salt is used like any other sea salt; ensure you use it in the right proportion to get the extraordinary Hawaiian flavor. Hawaiian black sea salt is the perfect match for dishes from fries to soups and everything in between. Its unique color and flavor made it the apple of our eyes. It also has detoxifying benefits; why on earth won’t you try it out?

The red variant, on the other hand, is infused with clay rich in iron oxide. It also adds more flavor to your dishes. Hawaiian red sea salt is, however, used as finishing salt in meals.

You will agree with me that the Hawaiian sea salt is a must-have seasoning in every home. You would also agree that it can be a scarce commodity because of its many important uses. As a result, we have found a way out in the absence of Hawaiian sea salt. That’s good news, right.

In the absence of Hawaiian sea salt, the following substitutes would do just fine.

If you’re looking for a finishing seasoning, or something to give your dishes a beautiful color, but you don’t have Hawaiian red sea salt at hand, then pink Himalayan salt is your best go to.

If you’re not interested in the color, but you need something to serve as a finishing salt, then you can opt for Fleur de sel instead of Hawaiian sea salt. Sea salt flakes is another perfect substitute.

For cooking traditional Hawaiian dishes, kosher salt would do just as well as Hawaiian sea salt. Fine sea salt can also serve as a suitable alternative.

Kala Namak is a great replacement when it comes to cooking and adding flavor to your dishes.

These substitutes give the same nutritional value as Hawaiian salt; the only difference is in quantity. You must be careful not to over or under season your delicacy while substituting.

Also, remember to check the sodium content when choosing a replacement, Because salts high in sodium tend to cause heart problems such as stroke, diabetes, chronic diseases, and the likes. Hence, it’s wise to go for replacements with similar sodium content with Hawaiian sea salt.

Fleur de sel is light and gray colored. It was initially a French sea salt. If you’re looking for the deep oceanic saltiness Hawaiian sea salt provides, then Fleur de sel is your best bet. It also has large crystals, so you get to enjoy crunch in your recipes.

Sea salt flakes is soft and crunchy, it’s an excellent substitute for Hawaiin sea salt. It gives your dishes a pretty look, and a crunchy finishing. If you would normally use a tablespoon of Hawaiian sea salt, then you should use half of sea salt flakes in order not to over season it.

Kosher salt is a suitable replacement for white Hawaiian sea salt. This salt has big crystals like that of Hawaiian sea salt; hence, it can be used to replace the crunchy nature in recipes in a 1:1 ratio. The significant difference between these two salts is in their mineral content.

One significant advantage of kosher salt is that it is readily available; hence, it’s the easiest option in the absence of Hawaiian sea salt.

For Cooking And Flavor

Kala Namak is another substitute for the black variant of Hawaiian sea salt. Its color is obtained by mixing sea salt with activated charcoal. Kala Namak contains sulfur, sodium, and other minerals.

Because of its strong flavor can’t be used in the same proportion as Hawaiian sea salt. Hence, replace two tablespoons of Hawaiian sea salt with one tablespoon of Kala Namak. You can increase the quantity to meet your taste, though.

Kala Namak also gives a distinct taste due to the presence of sulfur in it. This taste is similar to that of hard-boiled egg yolks; hence it can be used to give your dishes a flavor of egg yolks.

With the above Hawaiin sea salt substitutes, I’m sure you can never be stranded.

Many people prefer Hawaiian sea salt to its substitutes because of its enjoyable flavor of metal and clay. Hawaiian sea salt is a by-product of volcanic clay, rich in minerals and flavor, and goes well as finishing salt for pork, root vegetables, or white fish. Unlike pink Himalayan salt, Hawaiian sea salt contains enough alaea clay, making the salt flavor obvious in dishes.

What Are The Uses Of Hawaiian Sea Salt?

Hawaiian sea salt has been found helpful in preserving roasted meats and the likes of it. Coat your meat or fish with the Hawaiian sea salt before you steam it; this will help to keep the flavor and moisture intact. It has also been found to help fight bad breath and sore throat. All you have to do is dissolve it in water and leave it in your mouth for few minutes.

Hawaiian sea salt also helps with skin health and inflammation. The clay in it is a perfect facial mask when combined with olive or coconut oil. It’s so fast in removing dirt and impurities off the skin, leaving smooth and bright skin. It also has health benefits such as treatment of osteoporosis, a loss of bone density that happens with age.

The iron contained in Hawaiian sea salt also helps to restore iron to an iron-deficient person.

As earlier discussed, Hawaiian sea salt is used for cleaning purposes. Tools, homes, and the likes can be purified with its help. Up to date, Hawaiian use it for ritual purposes.

Are there differences between Hawaiian sea salt and pink Himalayan salt? The significant difference between these two salts is that the latter is mined in Himalayan and possesses a pink color, while the former is mined in Hawaii and has a distinct red color. However, both can be used in dishes to achieve the same goal.

What Is The Difference Between Black And Red Hawaiian Sea Salt?

The Hawaiian red salt got its color from the iron oxide in the alaea clay. However, Hawaiian black salt is made by mixing the salt with activated charcoal and dried under the sun.

Is Black Hawaiian Sea Salt Good For You?

Sometimes, I get skeptical about using the black Hawaiian sea salt, probably because of its black color, but having done my research, this is what I found; Did you know that Hawaiian black salt contains antioxidant properties with low sodium levels? Surprised, right? Essential minerals such as calcium, magnesium, and iron are also found; hence, using this black salt makes you healthier.

Is Sea Salt The Same As Hawaiian Sea salt?

The major difference is the land of origin. Sea salt is gray due to the soil composition from where it was collected, while Hawaiian sea salt got its color from the red Hawaii clay. Because Hawaiian sea salt contains trace elements, it is healthier than regular sea salt, as it helps maintain our bodies’ electrolyte levels.

How Is Hawaiian Sea Salt Harvested?

Hawaiian sea salt is harvested during summer when the land is dry. It is collected from rocky shoreline pools where it was left to dry, using natural solar evaporation. Sometimes, it is harvested on a larger scale using artificial shallow clay ponds, one of which is located on the island of Kauaii.

Environmental factors such as precipitation could also affect the duration the salt takes to be ready for harvest.

How To Use Hawaiian Sea Salt?

Hawaiian sea salt’s pleasantly unique flavor and texture can be enjoyed with grilled or roasted meat, grilled vegetables, salads, or fish. Hawaiian native dishes like Poke and Kalua pig are not complete without the Hawaiian sea salt. The seasoning brings life to Hawaiian foods.

Hawaiian sea salt is one of the most widely used salts. It has many benefits ranging from traditional to medicinal and, of course, cooking. You don’t have to limit yourself in the absence of Hawaiian sea salt since there are other replacements that are just as beneficial as the Hawaiian sea salt.

In terms of expense, these substitutes would be more cost effective too. With these said, go ahead and explore!