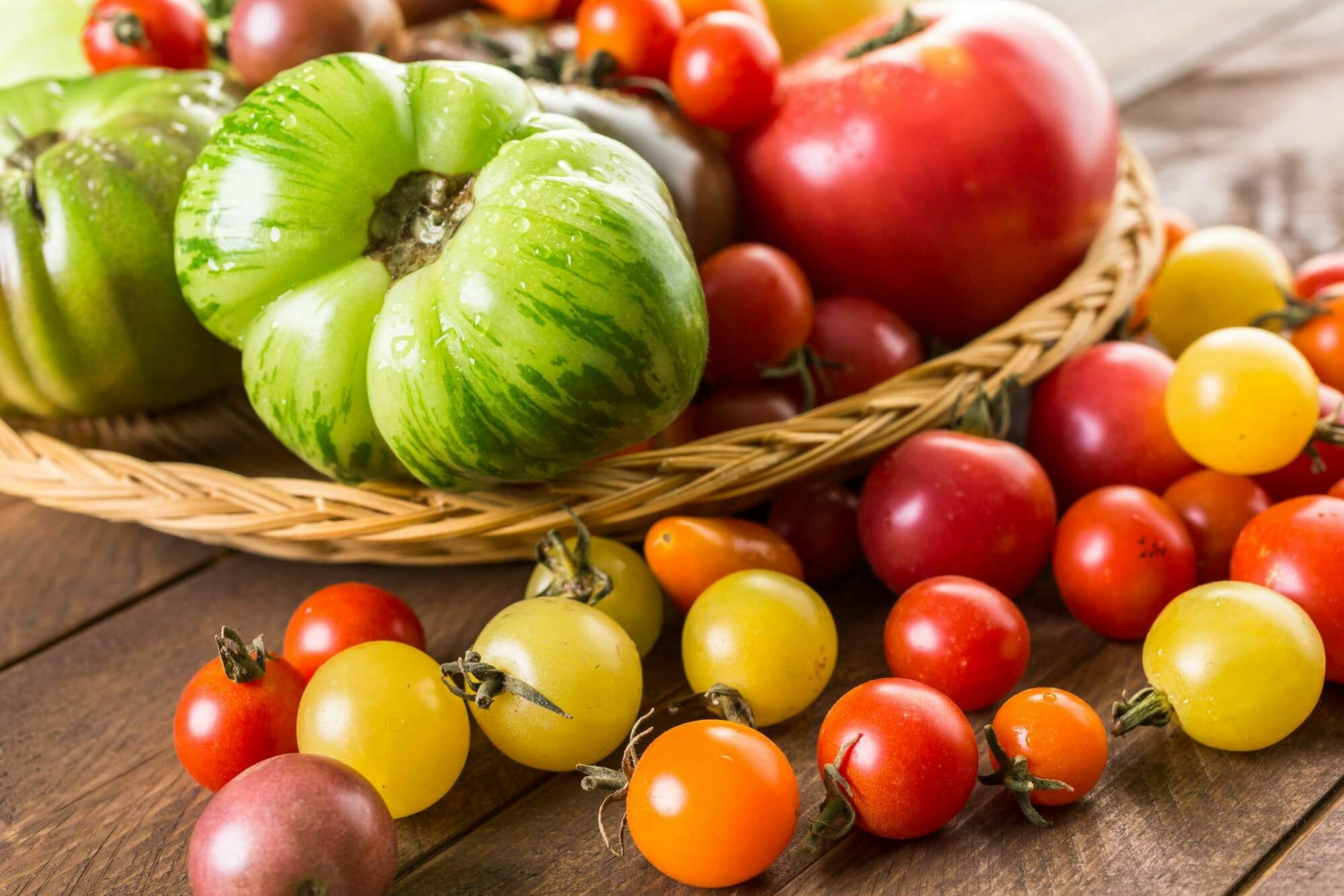 I was at the grocery store last week searching for ingredients to make a beautiful fresh bruschetta. this was a lovely organic recipe and called for heirloom tomatoes. what did this appointment when I ended up at the store and found that they were completely out of heirloom tomatoes?

Luckily for me, there are plenty of easy and delicious substitutes out there for tomatoes that can work just as well as the heirloom varieties.

We’ll be going over all of these substitutes in this article and the best ways to use them in different recipes, as well as answering any questions you might have about heirloom tomatoes.

Heirloom tomatoes are specially bred tomatoes using older seeds that have not gone through the same level of genetic modification as grocery store varieties of tomatoes.

They are wilder than grocery store tomatoes, and as such, they may grow in odd shapes and different colors, and a wide variety of sizes.

As industrialization took over around the world grocers preferred more uniform fruits and vegetables which were easier for storing and stacking and sold better.

In present-day people appreciate the value of heirloom varieties, which are increasingly difficult to get.

Why Do Heirloom Tomatoes Taste so much Better than Regular tomatoes?

Hybrid tomatoes have been bred to have thick skins, be durable, firm, and uniform in size, but they have not been bred for flavor.

Heirlooms are in their natural state and thus have far more flavor than typical grocery store varieties.

Can I Grow My Own Heirloom Tomatoes?

Tomatoes are very easy to grow on your own. You can purchase heirloom tomato seeds from a gardening supply store. Plant the seeds a couple of inches into loamy soil or potting mix, and water.

In about a week they will germinate, at which point you can transfer them to the ground or a pot.

Or if you don’t want to spend the money, you could even save the seeds from an heirloom tomato you buy at the grocery store and plant those!

Cherry tomatoes are that perfect snack size item. They’re round, they’re juicy, and they almost have a pop when you bite into them.

You can add them whole to a beautiful salad, or you can slice them and roast them to bring out the sweetness. at only roughly 3 calories per cherry tomato, this healthy snack is it perfect addition to any diet.

Cherry tomatoes are of course much smaller than heirloom tomatoes. They are actually not quite as sweet as a typical heirloom tomato, but sweeter than a great many other varieties.

If you don’t need your tomatoes to be a particular size and are only looking for something to add a burst of sweetness and tartness, cherry tomatoes are a great option.

Grape tomatoes are like the smaller tougher cousin of cherry tomatoes. They’re about half the size of a typical cherry tomato, but still pack a big punch of flavor.

Clocking in at only about 1 calorie per grape tomato, they make a great health food, snackfood, and all around nutritious option to eat.

Like the cherry tomato, grape tomatoes are going to be much smaller than most heirloom tomatoes that you will find.

Grape tomatoes have a much more uniform flavor and size, which makes them ideal for salads and snacks, but they are not going to be as interesting in flavor.

Plum tomatoes are a variety not seen as often in grocery stores. Plum tomatoes were bred specifically for canning and making sauces. They have an oblong shape almost like a small eggplant, and have very concentrated color and flavor.

Despite being a preferred option for canning, plum tomatoes also taste delicious sliced up with a little salt and pepper, thrown in a salad, or baked to become soft and jammy.

Who doesn’t love a delicious beefsteak tomato? These tomatoes got their name because of their hefty size and juicy beefy flavor.

Beefsteak tomatoes taste best when served at room temperature, and they make a great addition to a club sandwich or a wrap.

If you’d like to learn more about substitutes for tomato products, check out this article about sun-dried tomatoes.

5. Tomatoes on the Vine

You may be familiar with this popular variety of tomatoes. They are typically found in grocery stores with the vine still attached, often with 3 or more other tomatoes attached.

The vine still being attached keeps the tomatoes fresh longer and imparts the natural tomato flavor.

Tomatoes on the vine are known for having a bit more flavor than some of the other varieties, and they hold up well to being sliced up in a sandwich.

Tomatoes on the vine are very versatile though and can be used in a number of recipes and dishes.

Green tomatoes might be a bit harder to find unless you are living in the south. Green tomatoes are not actually a different type of tomato, they are typically tomatoes on the vine that have not fully ripened yet.

Green tomatoes are wonderfully tart, not very sweet, and quite firm compared to fully ripened tomatoes.

Because they are so firm they do not make for great sauces. Some people confuse green tomatoes with tomatillos, a plant related to tomatoes popular in Mexican cuisine to make dishes such as salsa verde.

Green tomatoes are a popular treat in the Southern U.S., where they are sliced, battered with cornmeal, and shallow fried to give a crispy exterior.

They are delicious with grits, pork chops, and some buttered beans. This article is a great reference for all things green tomatoes 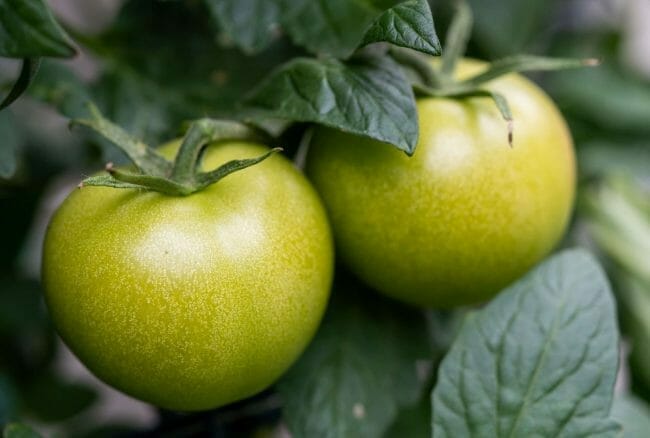 This little tomato is probably the most popular one you’ll find at the grocery store. Inexpensive and unassuming, the Roma tomato often gets some hate for being a tougher and more mealy tomato variety.

What many people don’t know though is that the mealy consistency of Roma tomatoes was bred specifically to make delicious Italian tomato sauces.

If you are looking to make salsas, sauces, or soups, Roma tomatoes are a perfect option.

Romas don’t make the perfect substitute for heirlooms because they are not as flavorful or fruity tasting as a classic heirloom.

If your recipe calls for cooking your tomatoes though, you can’t go wrong with a few roma tomatoes instead.

Like canned whole tomatoes, canned chopped tomatoes are picked, chopped, and preserved at peak freshness, locking in their flavor and texture.

Chopped tomatoes can be an even easier option if you are looking to make soups or other recipes that require a bit of knife skills.

Canned crushed tomatoes may be last on this list, but they are certainly not the least of our options.

Crushed tomatoes are the perfect easy weeknight addition to a bubbly soup or chili, the start of a quick puttanesca, or a beautiful addition to a casserole.

If your recipe calls for cooked or finely chopped tomatoes that get cooked down, save yourself the step and just opt for the canned variety.

Crushed tomatoes can even be a substitute for dishes like bruschetta or tomatoes on toast in a pinch.

Who says your heirloom tomato substitute has to be fresh? Canned tomatoes are picked and preserved at peak harvest times, meaning that they are picked when the tomatoes are the most flavorful and delicious.

Especially if you are shopping in the wintertime, canned tomatoes might taste better than the fresh ones in your grocery store.

It may not be as exciting of a choice as an heirloom tomato, but canned whole tomatoes can substitute for heirlooms in nearly any recipe with no problem.

Especially if you are cooking in the winter, a canned whole tomato can make a salad taste as refreshing as if it were the 4th of July.

If you are looking for a more creative alternative, a bright red pepper can be a great addition to a salad in place of an heirloom tomato.

It is crisp and bright and slightly sweet, and its bright color looks lovely in a garden salad.

Red peppers work wonderfully in many types of salads, and though they are a bit crisper than a tomato, their sweetness will be a great hit. You can replace red peppers for tomatoes at a 1:1 ratio.

Strawberries in place of a tomato? Believe it or not, strawberries make a fantastic substitute for tomatoes in salads.

The fleshy texture of perfectly ripe strawberries matches the beautiful soft texture of a ripe tomato.

Sweet with a hint of tartness, strawberries can take a salad from a boring weeknight dish to a standout star of the show.

Strawberries are noticeably sweeter than tomatoes, so keep this in mind when preparing your salad.

You will likely only need about half as many strawberries as your tomatoes in your salads.

Heirloom tomatoes are a beautiful variety of tomato that are literally bursting with flavor. But they don’t have to be your only option when it comes to cooking and baking with tomatoes.

Substitutes like cherry tomatoes can be great snacking options, while beefsteak or vine tomatoes are great in a sandwich.

Any sauce recipes work beautifully with Roma tomatoes or even canned tomatoes. Any of these options will work great as a substitute for heirloom tomatoes in your recipes.