How Long Are Krispy Kreme Donuts Good For? 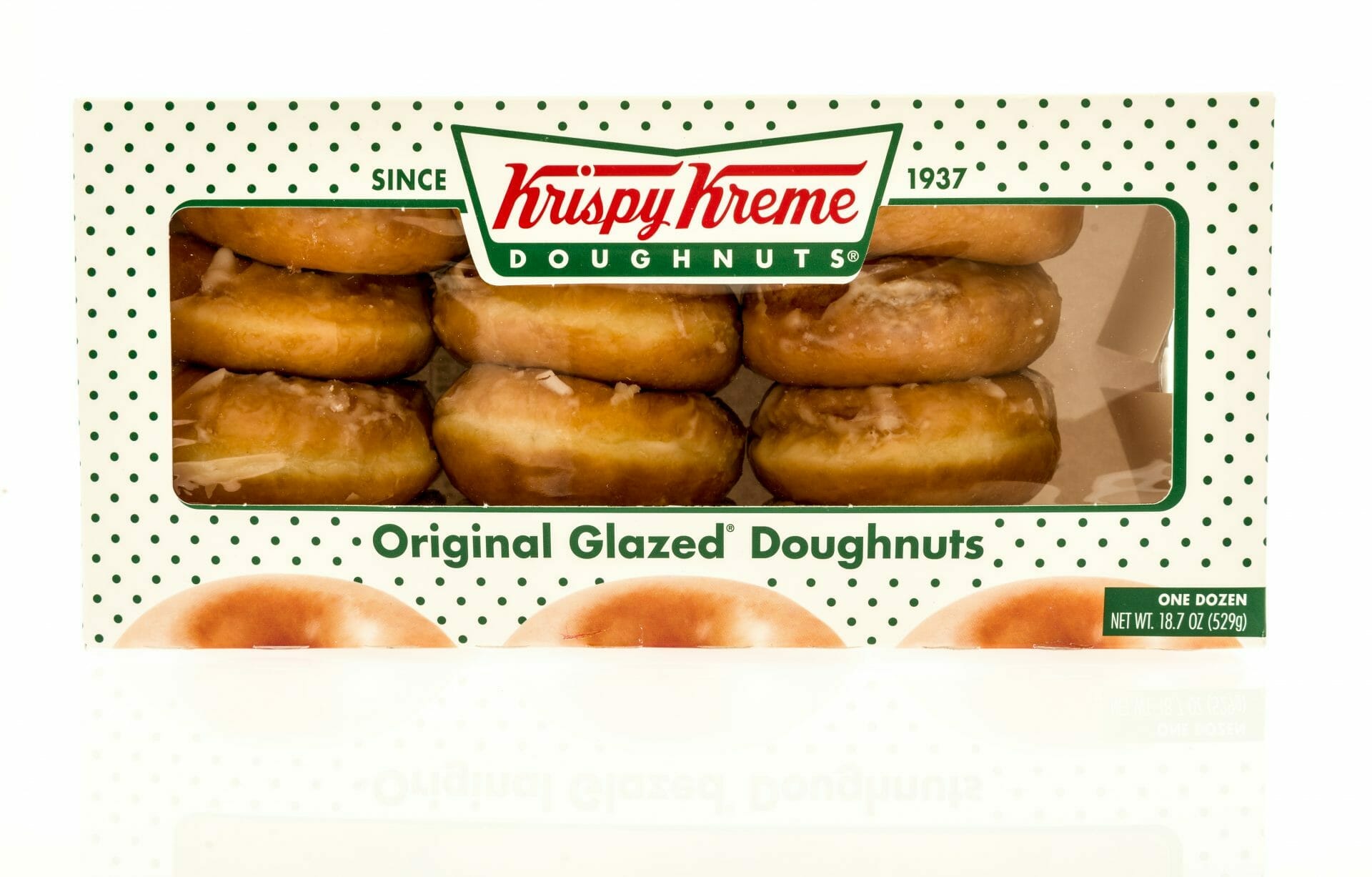 Krispy Kreme donuts have been around since 1937 and there’s no denying they’re delicious and addicting.

They’re a cultural icon and are popular in the U.S., Canada, Mexico, Argentina, Brazil, and Chile.

They’re always best served hot and fresh out of the deep fryer. This leaves the door open for a discussion on how long they’re good for after you’ve purchased them.

Krispy Kreme donuts don’t necessarily go bad, but they just won’t hit the spot as well as they did when they were fresh.

Fortunately, you can keep your donuts fresh with a few different methods that we’ll discuss in this article.

How Long Are Krispy Kreme Donuts Good For?

When properly stored, Krispy Kreme donuts are good for 1-2 days on the counter, 4-5 days in the refrigerator, and up to 8 weeks in the freezer.

Any donut that has a topping or glaze on it won’t do very well after it has been refrigerated.

They tend to lose their soft texture and aren’t as appealing. However, the Krispy Kreme donuts that are powdered and plain will do very well no matter how they’re stored.

With that being said, there are certain measures you can take to keep your donuts fresh for longer.

It’s already been said that Krispy Kreme donuts are best when they’re fresh, but if you have more of them than you could eat, don’t throw them out, even if they lose their luster.

We like to put ours in an airtight container or baggie with as much air squeezed out as possible and placed them in the refrigerator.

If the baggies don’t have air in them, the donuts won’t dry out. We get about 5 days out of refrigerated donuts if they stay at around 45 degrees Fahrenheit.

If you don’t have room in your refrigerator or don’t like the taste of donuts that come from a cold environment, you can leave them out on the counter.

We like to put ours in a container rather than in a baggie because we found that the bags sometimes get moisture trapped in there and it makes the donuts soggy.

If they’re on the counter, they’re only good for a couple of days before they go stale or taste bland.

If you choose to do so, you can freeze your donuts, but they may not taste the same.

This method will allow you to store them for up to 8 weeks. We’ve frozen our Krispy Kreme donuts before, but they just weren’t the same.

If you want to freeze your donuts, you can do so by tightly wrapping each donut with plastic cling film and then placed in a freezer bag.

All the air should be squeezed out of the baggie before it’s placed in the freezer.

Once you’re ready to thaw them, take them out of the freezer and allow them to dethaw at room temperature until they’re soft enough to eat without a knife.

This should only take about 15-30 minutes and you don’t need to thaw them in the fridge.

Also, it’s advisable not to cover the donut while it sits out because the moisture can’t escape. Covering the donut will make it soggy and nobody likes a soggy donut.

Plain and powdered donuts do well in the freezer since there’s nothing else on them.

There won’t be any significant changes in the texture or quality once they’ve been thawed, but the taste might not be the same. These are the best types of donuts to make alternative recipes with.

No matter how you store glazed or topped donuts, they melt. You can freeze them, but as soon as you leave the to thaw, the glaze is going to melt and make a sticky mess.

Refrigeration will also melt the toppings and this is why it’s not recommended to store glazed or topped donuts unless you really feel like you have to.

If you’ve ever eaten a frozen creme-filled donut before then you know that it’s not very tasty and texturally weird.

Freezing filled donuts means the filling will dry out and separate. When you taw it, it could be chunky or odd tasting. This is why we don’t suggest freezing the donuts unless you really have to.

If your donuts have hardened a little bit from being on the counter and exposed to air, you can save them still.

The best way to do this is to put them in the microwave at 15-second intervals if they’re very stale.

It’s not the fanciest solution, but it’s the best way to get the job done and an industry standard.

The employees at Krispy Kreme actually recommend putting their glazed donuts in the microwave at 5-second intervals.

If you’re reheating jelly donuts, remember that it will get very hot and if it’s glazed or frosted, it might melt a little.

If you don’t want to use the microwave, you can use your oven. Preheat your oven to 350 degrees.

Once it’s ready, put the frozen donuts on a baking sheet and pop them in the oven. Check after ten minutes to see if they’re still frozen. If so, bake them for a few minutes longer or until they’re unthawed.

If you don’t want to nuke them in any way, you can simply leave them on the counter to thaw at room temperature.

Keep them covered and allow them to thaw for a few hours. We suggest about three hours before checking them.

Continue to leave them on the counter until they’re thawed if it goes past the 3-hour mark.

If your donuts are older than a day and you notice something is off about them, they may have spoiled.

One of the first signs that your donut may be bad is that it might have an odd odor. We’ve personally never smelled a strange odor coming from our donuts, but it can happen with creme-filled ones.

Sometimes it can be tough to identify a spoiled Krispy Kreme donut because more often than not, they don’t really show signs at all.

Next, check their texture and color. Spoiled donuts will be hard and unappealing to the pallet.

If the color of the donut is different than what you recall when you first bought them, it’s probably time to throw them away.

When it comes to creme-filled donuts, make sure the center still looks moist and doesn’t smell strange.

We don’t like to eat creme-filled donuts that have been sitting on the counter for more than a day or so. The taste just isn’t the same.

It’s completely possible for your donuts to grow mold, although we’ve never actually experienced it.

Even if the donuts are refrigerated, they can still grow mold. Mold shouldn’t be messed around with because consuming it can cause stomach illnesses and other issues.

You may experience shortness of breath, nausea, diarrhea, and an elevated temperature.

Most likely you’ll be okay if you consume just a small amount of mold on your donut that you may not have seen.

Leaving your donuts somewhere other than may speed up the spoilage process, such as outside, which we don’t suggest.

Donuts can be left outside depending on the location and temperature. Donuts shouldn’t be left in extreme heat because they’ll melt, especially if they have icing on them.

Additionally, if your donut has creme-filling in them, the heat may cause them to go bad.

Additionally, don’t leave the donuts in the open air, especially outside. This will cause the donuts to dry out.

If this happens, the donuts will taste bland and be hard to bite. If you have to store your donuts outside, keep them out of the sun and in a shaded, cool place.

Krispy Kreme donuts are delicious, we can all agree on that. If you purchased too many of them or just couldn’t finish the ones you bought, you can store them for later. We don’t suggest freezing them unless you absolutely have to.

The best method for keeping them tasting just as good as the day you bought them is to refrigerate them.

They’re good for 4-5 days if properly sealed in cling wrap or a plastic baggie.

Don’t ever let a Krispy Kream donut go to waste. Use them in a recipe, freeze them if you have to, or invite friends or family over to share the overabundance of donuts with you. We love making new recipes with even stale donuts.