How Long Can California Rolls Sit Out? [At Room Temperature] 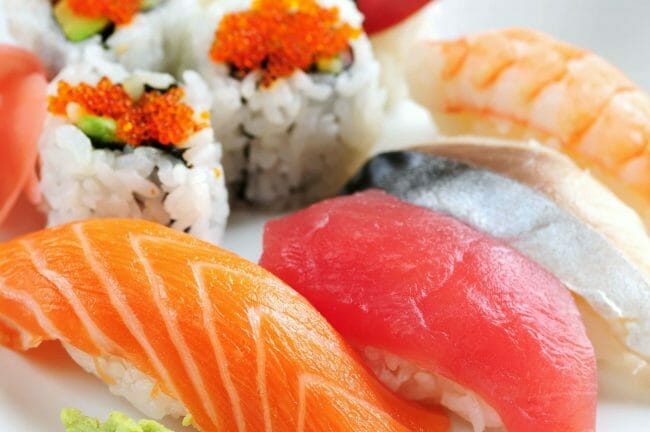 The California Roll first got famous around 1979 when it appeared in the LA Times. Ever since, people have enjoyed eating these delicious sushi rolls.

Their popularity has made them great for everything from parties to healthy snacks. But, if you are making California rolls for yourself to enjoy, you may be wondering how long you can keep them out at room temperature.

However, rolls kept past twenty-four hours become a health risk. Additionally, California rolls and other types of sushi do not freeze well.

The USDA has a tough stance on raw fish – it’s not safe for consumption as far as they are concerned. However, one of the best parts about California rolls is that they use cooked crab meat instead of the raw fish used for traditional roles.

This is a westernized variation on sushi, and because it consists of cooked crab, California rolls last a little longer at room temperature than raw fish.

The Danger Zone And Sushi

The USDA defines the Danger Zone as any temperature between 40 °F and 140 °F. When sushi becomes exposed to the Danger Zone for more than two hours, it becomes too warm and develops bacteria.

If the temperature reaches 90 °F, the sushi can’t be out for longer than one hour, or it will become dangerous to eat.

There Are Dangerous Ingredients In California Rolls

Crab is the primary meat served in California rolls, but some variations use a fish-cake or other form of sashimi, like tuna, to create the California roll.

All seafood can potentially harbor hidden parasites when served raw, which is why the USDA does not endorse sushi consumption. Additionally, even cooked crab can develop food-poisoning bacteria when left at room temperature for more than two hours.

Perishable foods, like cucumbers and avocados, should never sit out at room temperature for more than two hours. Fresh vegetables can become a breeding ground for bacteria that will make consumers sick.

Traditional California rolls contain a mayonnaise sauce. Most mayonnaise contains raw eggs, which can carry salmonella and e. Coli bacteria known to cause food poisoning. When left out at room temperature for more than two hours, the bacteria in raw eggs can grow to dangerous levels.

If you can’t remember how long the California rolls have sat out on the counter, you can usually identify their consumption safety via one of these three methods.

Your nose has a great ability to tell if food is going bad. So give the California rolls a good sniff. Don’t eat if they smell extremely fishy, sour, or moldy. Fresh sushi shouldn’t have an overly fishy smell.

Sushi rolls come to room temperature when left out of the fridge for too long. If you touch the sushi roll with a finger and it is warm or clammy to the touch, it’s not safe to eat. California rolls should always be slightly cold and kept chilled to stay safe for you to consume.

As the rice and seaweed of a California roll stay exposed to room temperature, two things will happen. One, the rice will grow dry and brittle, breaking off from the roll itself. Two, the seaweed can grow slimy or brittle. In either case, the California roll is unsafe to consume.

If you can’t tell how safe your California roll is to eat, you may consider giving it a taste test. Don’t! Sushi that has sat out too long can give you food poisoning, and it may taste fine but still harbor dangerous bacteria or parasites. So never taste test California rolls to judge their safeness. When in doubt, toss the rolls out!

Generally, California rolls are less likely to contain parasites like tapeworms and anisakis (herring worms) because you serve the crab meat inside the rolls cooked. But, undercooked crab meat can harbor these hidden parasites.

Additionally, many California roll variations contain raw crab meat or other types of raw fish. When you leave fish out at room temperature, these parasites thrive, and so do any bacteria living in the fish.

If you are concerned you might have a parasite from raw sushi, keep an eye out for an upset stomach, bloating, intestinal pain, weight loss, and anemia.

Food poisoning can occur with parasites or by itself. Common symptoms include stomach upset, cramps, nausea, and vomiting.

Protect Yourself By Refrigerating California Rolls

Additionally, keeping California rolls in a container with a lid or covered by plastic wrap will prevent cross-contamination by other foods in the fridge and prevent bacteria from contaminating the food.

If you have a party where California rolls are on the menu, you won’t want your guests to keep opening and closing the fridge to get their tasty snack. You can help keep your California rolls cold and safe to eat by using a few of these serving hacks. And, if you’re some complimentary sides for your California rolls, check out our article on what to serve with sushi!

Fill a gallon freezer bag with water and lay it flat in the freezer. Once frozen into a thin sheet, you can remove the bag and place the ice on a serving tray or baking sheet. Next, place the California rolls on a serving tray and rest on the ice to keep the sushi cold.

A quick and easy solution to keeping California rolls cold is to fill a large serving bowl or deep baking dish with ice cubes. Then, rest the serving tray with the rolls on the ice cubes. Refill the cubes as needed, emptying water as the ice cubes melt.

If you want to create a trendy serving arrangement that will keep your California rolls cold for two hours, try using dry ice. Simply keep the serving tray with the rolls on top of the dry ice. Just make sure your guests don’t touch the ice, which can cause minor frostbite!

How To Pack California Rolls To Go

Place an icepack underneath the rolls and one on top of the rolls if possible. If you take the rolls to work, see if you can keep them in the fridge until you are ready to eat them.

California rolls are delicious, so it’s no wonder some people wonder if they can freeze them to save the rolls for later. Unfortunately, California rolls do not freeze well.

In fact, the rice that makes up most of a California roll will fall apart and become dry and brittle when frozen. Additionally, the nori seaweed in the roll can become slimy after defrosting.

Crabmeat is the central ingredient for California rolls. A more economical variation on crab meat is Kanikama, a type of fish cake containing no crab.

Most California roll recipes call for avocado. Avocados were an addition to Westernized sushi but have grown in popularity in Japanese cuisine.

You can’t use just any rice to make sushi. Instead, you should use uruchimai, also known as Japanese rice. This rice variation is stickier than most rice, allowing it to form into sushi rolls easily.

Japanese food does not use just any kind of seaweed for sushi. California rolls and other sushi contains nori seaweed, a specially dried seaweed used specifically for sushi.

Vegetarian California rolls are another popular variation, containing all the traditional ingredients of a California roll but substitute crabmeat for tofu or more vegetables.

California rolls are a delicious offering for lovers of crabmeat everywhere. But, they can make you sick when left out at room temperature too long or stored improperly. So, remember to refrigerate your California rolls when you don’t plan on consuming them in the next hour and keep them in an air-tight container for optimal freshness.

And remember, when in doubt about the sushi’s freshness, it’s best not to take risks. Happy eating!