How Long Can Cheesecake Sit Out? [Vegan & More] 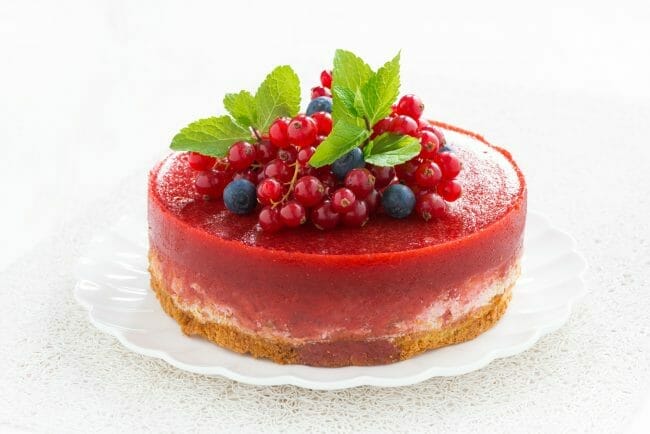 Cheesecake is a delectable dessert, and it’s a great selection for dinner parties or other events. People love it, and there are so many types available.

You love cheesecake so much; you put one out for your guests. But time has gotten away from you. Now you’re wondering, how long can cheesecake sit out before going bad?

Every single type of cheesecake can only sit out at room temperature for 2 hours. This rule applies to dairy and nondairy vegan options. It also applies to cheesecakes that are store-bought and homemade.

Sugar is a preservative; cheesecake is special because it’s made with cheese. There are a few types of cheese you can use to create different cheesecakes.

But they all fall under the 2-hour warning by the USDA. Sugar isn’t enough to protect your cheesecake from contracting toxins that cause foodborne illness.

The main ingredient in most cheesecakes is cream cheese. This ingredient is why they only last out of the fridge for 2 hours.

Of course, some variations don’t use cream cheese. We thought it would be good to cover them all for a comprehensive look at a fabulous dessert.

When talking about cheesecake, classic refers to a mixture of cream cheese, sugar, the juice and zest of a lemon, eggs, salt, and sour cream. It’s typically served with a graham cracker and butter crust.

You can serve it plain, with whipped cream, or drizzle chocolate over the top. You can’t go wrong with this simple yet delectable decision for cheesecake.

Due to the dairy ingredients, you should not let classic cheesecake sit out for longer than 2 hours. Otherwise, you will risk foodborne illness to everyone that eats it.

This type of cheesecake may use some of the same ingredients as the classic style; it’s different.

New York cheesecake calls for more cream cheese and less cream or sour cream. The results are a denser and rich cheesecake that is reminiscent of the Big Apple.

New York cheesecake is typically served plain or with a berry drizzle. It cannot sit out longer than 2 hours or move into the Danger Zone. If you leave it out longer, you must throw it away to avoid harmful bacteria.

The Windy City could not let a type of food go by without creating its version. Chicago Style Cheesecake is fluffier than its New York counterpart.

It’s baked in a greased cake pan, and it uses even more cream cheese. This type of cheesecake can be served plain or with a drizzled topping.

Chicago-style cheesecake will also go bad if it’s allowed to sit out longer than 2 hours. The Danger Zone is a breeding ground for harmful bacteria, and you could get food poisoning.

This cheesecake shares its name with a Pennsylvania city. But it’s named after the brand of cream cheese. This recipe is lighter than most and has a deeper flavor than the other brands we’ve discussed.

Philadelphia cheesecake can only sit out for 2 hours. Otherwise, it moves into the Danger Zone, and you will risk foodborne illness.

Also known as Ostkaka, the original recipe requires the chef to curdle milk. Cottage cheese is an excellent substitute if you don’t have the knowledge or time to complete this task.

Swedish cheesecake isn’t as sweet as the kind served in the States. It comes without a crust and is typically served with jam.

Swedish cheesecake still has dairy, so you can’t let it sit out for longer than 2 hours. When it moves into the Danger Zone, this cake becomes a breeding ground for bacteria.

One of the oldest recipes for cheesecake known to man, Roman cheesecake is crustless too.

The ingredients include flour, honey, eggs, and ricotta or Italian farmer’s cheese. This is our second cake that doesn’t require cream cheese or cream.

Traditionally, this cake is topped with poppy seeds. Due to the dairy, Roman-style cheesecake cannot sit out longer than 2 hours or move into the Danger Zone.

We decided to lump a few of the other cheesecake into one category. Here is a list of the most popular flavors of specialty cheesecake.

Honestly, the list could go on and on. There are very few flavors that wouldn’t work with cheesecake.

Still, all of these cakes have a high moisture content. So they can only stay out for 2 hours. If you left any cheesecake out longer, it should be thrown away.

Who says cheesecake is only for dessert? There’s a myriad of savory versions that you can make. Here are a few flavors that caught our eye.

If you think about savory cheesecakes like quiche, then the options are endless. You can add onions, garlic, zucchini, and more.

You must remember, though, most of these ingredients are perishable. So they need to be put into the fridge before that 2-hour time limit. The Danger Zone shouldn’t be taken lightly.

Neufchâtel is a type of cream cheese that originated in France. It’s named after a town in Normandy.

Neufchâtel is a cow’s milk cheese and has a higher moisture content than cream cheese. It also contains less fat. It’s also softer, so your cheesecake won’t be as dense.

Neufchâtel is a dairy product. Cheesecake created with Neufchâtel can only sit out for 2 hours. Otherwise, it will move into the Danger Zone and could cause food poisoning.

Japanese “Cotton” Cheesecake is probably the lightest cheesecake of them all. It’s made more like a soufflé and quite fluffy. The recipe requires the cheesecake to cool in the oven for an hour.

The texture may be different, but that doesn’t mean it will last out longer than 2 hours. Japanese cheesecake will move into the Danger Zone in 2 hours, so get it in the fridge.

No-bake cheesecakes eliminate eggs, and they “set” while sitting in the fridge. All the cakes we’ve discussed have required baking time in the oven. This type does not, which is why it has the name “no-bake cheesecake.”

Even though it chills to set instead of baking, no-bake cheesecake cannot sit out longer than 2 hours. It still contains cheese and high moisture ingredients, which bacteria love.

Vegan cheesecakes don’t include any cheese or animal products at all. There are several recipes for vegan cheesecake available, and they all call for plant-based ingredients. Some include cashew cheese, and others call for tofu and almond milk.

Even though they don’t require animal-based ingredients, vegan cheesecake is still perishable. This means it can only sit out for 2 hours before going bad.

How Long Can Cheesecake Sit Out Before Going Bad?

Cheesecake of any kind will go wrong if it sits out for longer than 2 hours. This is the rule set by the USDA. The Danger Zone is where bacteria can multiply rapidly.

We all hate to waste food but throw that cheesecake away if it’s not in the fridge in 2 hours. This goes for store-bought, homemade, dairy, and non-dairy cheesecakes.

Every single type of cheesecake out there should be stored in the fridge. This has to do with the high moisture content and the Danger Zone. Harmful bacteria can infest your cheesecake and make everyone sick.

How To Store Cheesecake In The Fridge

Cheesecakes of all kinds should be put into an airtight container or covered well before putting it in the refrigerator.

Air carries bacteria that will still multiply at below 40˚F but not fast. This is why cheesecake lasts longer in the fridge.

This includes dairy, non-dairy, store-bought, and homemade. As we’ve said, bacterial will still collect. They just move slower. After a few days in the fridge, cheesecakes of any kind can be riddled with bacteria.

If you have frozen cheesecake of any kind, we suggest you let it defrost in the refrigerator overnight.

The microwave will cook it, and letting it sit on the counter is dangerous. Cheesecake defrosts on the counter; the outside will move into the Danger Zone.

Meanwhile, the center remains frozen. This type of defrosting can lead to bacterial infection and foodborne illness.

When it comes to sitting out at room temperature, both cheesecakes have 2 hours. Both store-bought and homemade cheesecake can be frozen. And they are both good in the refrigerator for five to seven days.

How To Tell Cheesecake Is Bad

Bacteria that cause foodborne illness are not always detectible by the naked eye. But, if your cheesecake has a sour smell or funny color, throw it away.

Cheesecake is a delicate dessert, and there are so many versions available. The most important takeaway from this article is that they are all at risk if left out for more than 2 hours.

It doesn’t matter if it’s store-bought, dairy, non-dairy, or homemade. If you left the cheesecake out, get rid of it. Your stomach will thank you for it.