How Long Can Clam Chowder Sit Out? [The Best Way To Store] 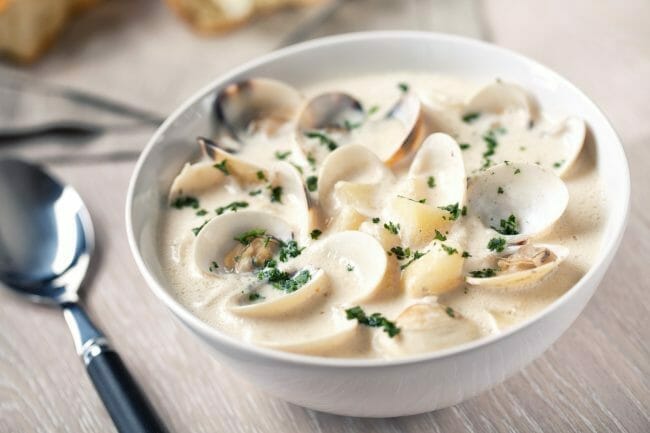 Clam chowder is a broad term for several soups found in the New England area. As a soup lover, you decided to open a can of your favorite brand.

Then the phone rang, and you let your bowl sit out. How long can clam chowder sit out before it goes bad?

This soup, or clam stew, was first introduced to the New England area by settlers from France, Nova Scotia, and Brittian.

From there, it took on a life of its own, and many regions in that area have their version. The 2-hour rule applies to every kind of clam chowder we cover when it comes to food safety.

Before we go on about food safety and how to store your clam chowder, let’s take a look at the different kinds that are out there.

While some believe this is the original clam chowder, fish chowder and stews go farther back than the settlers in the United States. But, for the sake of this article, we will give this style of chowder the props it deserves.

The main ingredients in this brand of chowder are onions, celery, clams, potatoes, and cream. Some recipes call for bacon or salt pork.

All of these ingredients come together to create a smooth, creamy, and clammy dish that sticks to your ribs. New England clam chowder cannot sit out longer than 2 hours. Otherwise, you risk bacterial growth and foodborne illness.

The Union Oyster House in Boston has been serving clam chowder to that area longer than any other American restaurant that has it on the menu.

Manhattan is an island in New York that felt it could not be outdone, so someone there created a unique version.

There are conflicting reports, but the first printed recipe for Manhattan clam chowder could have been in 1919. But it didn’t receive that moniker until the mid-1930s.

As you can see, this style isn’t cream-based and adds tomato. Rumor has it some critics thought that was a horrible combination. But this chowder has lasted through the years. It’s stood the test of time.

Manhattan clam chowder cannot sit out at room temperature longer than 2 hours. That’s when it moves into the Danger Zone, where bacteria can grow.

Rhode Island clam chowder is usually made with a clear broth, but some chefs add tomato puree. The ingredients are primarily the same as Manhattan, and it is also void of cream.

The distinct difference in this chowder is they use quahog clams. These clams can grow to be very large.

New Jersey likes the cream, and that’s why they use it in their version. It’s original because it calls for cream of asparagus soup.

It’s not surprising that New Jersey would come out with something that would make their version special.

New Jersey clam chowder cannot sit out longer than 2 hours. If it does, bacteria will multiply, and you can get ill.

Long Island couldn’t be left out, and their version is a rare mixture of New England and Manhattan clam chowders.

The result is a pink broth. Long Island clam chowder is a fantastic option for those who love cream and tomatoes.

Long Island clam chowder cannot sit out for longer than 2 hours. Otherwise, it will move into the dreaded Danger Zone that the USDA set as a standard.

St. Augustine, Florida, is home to this soup, which is close to Manhattan. It has a heavy tomato base, and they also include peppers native to Cuba. The flavor is unlike their North Eastern counterparts but delicious all the same.

Minorcan clam chowder must also follow the 2-hour rule. This version is just as susceptible to the rapid growth of harmful bacteria in the Danger Zone.

As we’ve mentioned, there is no telling who created the first fish chowder. But, it’s fun to experiment with all the derivatives of this dish.

What’s most important is this. All of these chowders cannot sit out at room temperature for longer than 2 hours.

If you must leave them out for a party, we suggest keeping your chowder on the stove, in a slow cooker or crockpot.

You don’t want the soup to move into the dreaded Danger Zone. Some bacteria can lead to food poisoning and severe symptoms.

Which Chowder Is Best?

This is all up to personal taste and flavor preferences. For those that don’t care for cream, stick to Manhattan, Rhode Island, New Jersey, and Minocin.

If you like cream, then make the others. If you enjoy all the ingredients, you can make it a goal to try them all—the latter sounds like the most fun.

Due to the main ingredients, the best way to store any clam chowder is in the fridge. Refrigerators are kept at 40˚F or lower so that the food stored there will stay out of the Danger Zone.

We all know when food moves into the Danger Zone, the temperature is perfect for rapid bacterial growth.

It’s also essential to put your chowder in an airtight container. Bacteria still grow at temps lower than the Danger Zone, just not as fast.

If you leave your soup uncovered, the air inside the fridge can infiltrate the chowder. It’s also a good idea to put a date on the container, so you remember when you stored it.

How Long Will Clam Chowder Last In The Fridge?

Once your chowder is in an airtight container, it will last for three days. Three days is typical for perishable foods, especially those with fish or cream.

This is the reason why we always suggest dating the food you store. When you see that date, you’ll know that the time is coming to eat it or throw it away.

Maybe you found a container of clam chowder in the back of the fridge. You have to eat it by tomorrow, or it will go bad. But you have reservations at the new place downtown. What do you do?

You can freeze all stews, soups, chowders, and sauces. They have to be sealed well in an airtight container.

It’s also important to remember that liquid expands when it freezes, so leave a half-inch space of air on top. Make sure to make the date you put it in the freezer.

Once you have it in the freezer, it could last up to six months. However, we recommend using it within three to four months. It won’t be filled with bacteria.

The flavor and consistency may be altered if ”freezer burn” gets to it. Freezer burn happens when food loses moisture, which happens every day your food is frozen.

Does The Cream Kind Freeze as Well?

Broth soups freeze but cream, on the other hand, has its disadvantages. Delicate ingredients don’t always freeze well and are at more risk of changes in consistency and taste.

The takeaway here is to make smaller amounts of cream-based soups or eat it all before you have to freeze it.

When you are ready to eat that frozen chowder, don’t take it out of the fridge and let it sit on the counter. This is a great way to invite harmful bacteria into your food. Defrosting takes time.

After the 2 hour window suggested by the FDA, it moves into the Danger Zone. Once there, the risk of foodborne illness increases.

You can defrost it by pulling it out of the freezer the night before and letting it sit on a plate in the fridge. When you wake up, you’ll have thawed chowder.

If you didn’t know you wanted clam chowder, you could leave it out at room temp for under 2 hours.

The contents should begin to separate from the container. Once that happens, you can put it in a pan with a touch of water and put it on a low flame. Cover your soup and let it heat up.

If you don’t have a lot of time to wait, submerge the container in some warm water. The soup will separate from its heavy-duty freezer bag like a block of ice.  Put the frozen soup in the pan and follow the steps above.

Once it’s heated and you shut off the flame, it has 2 hours before moving into the Danger Zone. If you want the soup to sit out, you can warm it with a crockpot or hot plate.

As far as how long you can leave them out, 2 hours is the limit. Canned clams that are unopened can last until the expiration date. Once opened, they have a few days.

When considering which type to use in your clam chowder, both of them have their merits. Fresh clams are not that easy to come by.

Shucking clams is a lot of work. Save yourself some time and get canned clams. The juice is also great for flavor. If you insist on fresh clams, use littlenecks.

Clam chowder is an American tradition. There’s a clam chowder for every taste with all the versions available.

Except for those who don’t like clams or seafood. If you’re reading this, then you must love clams and adore the chowders listed here.

No matter which you prefer, once they move into the Danger Zone, all clam chowders can spoil fast.

Get it into the refrigerator before that time is up. Otherwise, someone could get sick. Food poisoning isn’t worth the risk.