How Long Can Cool Whip Sit Out? [Ingredients & Proper Storage] 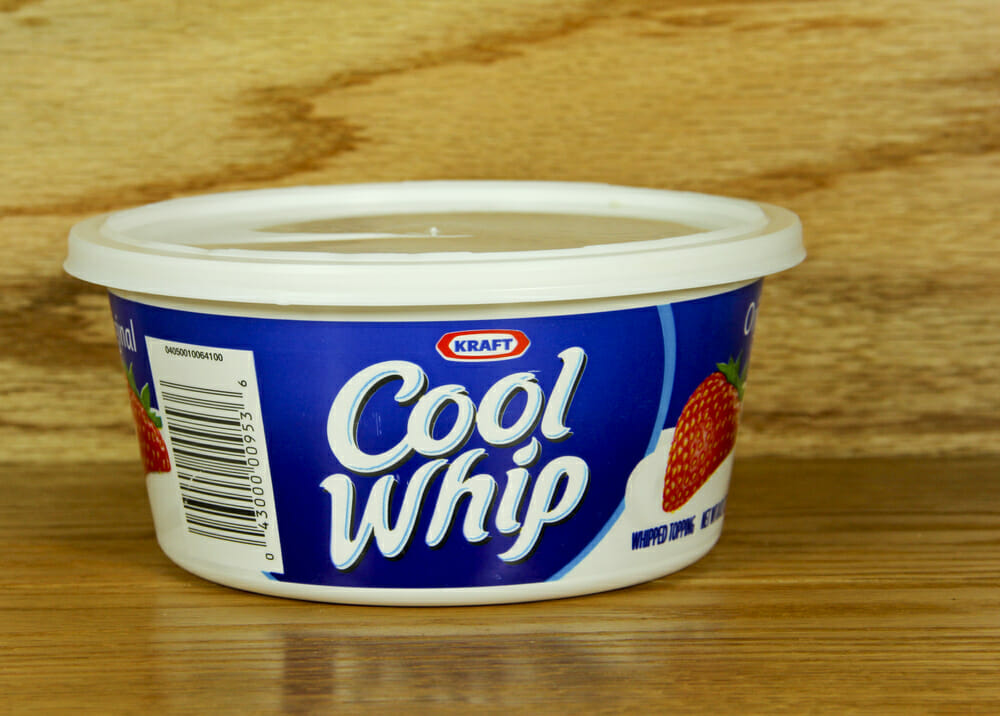 When you have pie or cobbler, you probably enjoy topping it with Cool Whip or whipped cream.

After enjoying dinner and pie, when you finally get around to putting away the leftovers, you may find that your Cool Whip has been sitting out for a long time.

How long can it sit out and still be good to eat?

Cool Whip in its original container or desserts made with Cool Whip need refrigeration within 2 hours of being out at room temperature.

When you have a big dinner and set out Cool Whip with dessert, you can leave it out at room temperature for 2 hours.

After a couple of hours, Cool Whip may lose some of its fluffy texture.

For the best flavor and texture, return the Cool Whip to the refrigerator or freezer within 2 hours of being at room temperature.

Cool Whip is the name-brand whipped topping made by Kraft. It is primarily made of vegetable oils, high fructose corn syrup, and other stabilizing ingredients. It does contain milk proteins, so it is not dairy-free.

However, the milk proteins make up a small percentage, making this product more stable than other whipped cream products.

The presence of these milk proteins also makes the Cool Whip a perishable food item that requires refrigeration.

Kraft recommends that you write the date you buy the Cool Whip on the label when you buy it.

You can refrigerate Cool Whip for 2 weeks, making it convenient and delicious to top the leftover pies from your holiday celebrations.

Finally, and somewhat counter to other products, you can refreeze and thaw Cool Whip up to 5 times! This definitely offers you more flexibility than other similar products.

You can tell if Cool Whip is no longer good to eat if it separates and becomes watery, is growing mold, changes color, or smells bad.

If you have any doubt about whether the Cool Whip is safe, you should discard it and purchase a new container.

The best way to thaw Cool Whip is to set it in the refrigerator for 4-5 hours. This method ensures that the texture will remain light and fluffy.

If you are a little short on time, you can set it out at room temperature. It takes a couple of hours for the Cool Whip to thaw at this rate.

Thawing Cool Whip on the counter at room temperature may affect the texture.

Another quick way to thaw Cool Whip is to place the bowl of frozen Cool Whip in a larger container of cool water.

Be sure to use cool water, not warm water, because warm water will melt the Cool Whip and cause it to separate.

Some people turn to the microwave to defrost Cool Whip when they are extremely short on time.

Be careful with this method because it can completely melt and separate the Cool Whip ruining the texture and flavor.

Remove the lid from the Cool Whip tub and cook for 30 seconds using the defrost setting on the microwave.

Cool Whip is available in several varieties: original, extra creamy, fat-free, sugar-free, and lite. Be sure to read the labels to see which one best fits your dietary needs.

Storing Desserts Made With Cool Whip

Cool Whip is a common ingredient in cool, creamy desserts.

You can create a light and fluffy banana pudding, add Cool Whip as the topping of a pudding-filled pie, Use Cool Wip as frosting for a cake, or make a pumpkin dip for a holiday party.

Keep any dessert made or topped with Cool Whip in the refrigerator. If the desserts are sitting out during a meal, be sure to return them to the fridge within 2 hours.

You may be able to freeze some Cool Whip deserts, but you should check on the other ingredients to see how well they will hold up in the freezer.

Another common whipped topping is the aerosolized whipped cream found in the dairy case.

These propelled whipped creams must be refrigerated, or they will lose their texture and pressure.

These toppings are primarily cream with some stabilizers and sweeteners.

You can keep aerosolized whipped cream at room temperature for a couple of hours but then return it to the refrigerator for the best quality.

According to the Land O Lakes FAQs, you should use the whipped cream by the best by date on the can.

However, many people report that they use these products for 2-3 weeks after opening with no ill effects.

Reddi Whip suggests that you can extend the life of your whipped cream by rinsing the nozzle in warm water before you return it to the refrigerator.

Do not freeze aerosolized whipped toppings.

You can make your own whipped cream in just a few minutes. When you make it yourself, you control the ingredients.

Homemade whipped cream does not last as long as Cool Whip or the propelled canned whipped cream, but you can have the satisfaction of knowing that you made it on your own.

To make your own whipped cream, use a medium or large bowl and a hand mixer. You can whip it by hand if you are authentic, but then you will just be tired.

Pour heavy cream into the bowl and whip it with the mixture until it becomes fluffy and soft peaks form.

You can add a splash of vanilla and a tablespoon of powdered sugar if you like a little sweetness and flavor in the cream.

Keep your homemade whipped cream in the refrigerator for 1-2 days. If it loses its fluffiness, you can whisk it by hand to aerate it.

However, if you continue beating it with the mixer, you will end up with butter.

If you want to decorate a cake with whipped cream or just want it to last a little longer, say 3-4 days in the refrigerator, you can add some stabilizers to your homemade whipped cream.

There are essentially 2 methods to stabilization, adding starch or adding gelatin. If you want to decorate a cake, for example, and need the piping to hold for more than a day, use the gelatin method.

If you just want your whipped cream to keep a few days longer for the holidays, the starch methods are easier and will work just fine.

Add Starch To The Whipped Cream

You can add any one of the following to your whipped cream to stabilize it. Adding additional amounts won’t make the cream stiffer, and it will affect the flavor, so stick to the listed portions.

Start by chilling the bowl. It makes the cream easier to whip. Pour your heavy cream into the bowl and whip it.

Continue whipping the cream until it is fluffy and stiff peaks form. Then stop whipping it, or you will end up with butter.

If you plan to decorate a cake with whipped cream, you should use the gelatin method to stabilize the cream.

This takes a little longer, and you need to pay attention to the steps for the best results.

First, you will bloom the gelatin by placing it and water in a microwave-safe bowl and letting it stand for 2 minutes.

Next, dissolve the gelatin in the microwave in 10-second intervals until all the granules dissolve.

Set aside the gelatin, but keep it warm while you whip the cream. If any foam or bubbles form on top of the gelatin, skim them off. They will ruin the whipped cream.

Next, pour the heavy cream into a chilled bowl and whip. After 30 seconds, add vanilla and sugar.

When the cream reaches a stage between soft and stiff peaks, you will temper the gelatin. Add a tablespoon or two of the whipped cream to the gelatin and stir.

Finally, add the gelatin mixture back to the whipped cream and whip until firm peaks form.

This cream will be stable enough to frost and pipe a cake; however, you should refrigerate this dessert until ready to serve.

Cool Whip whipped topping can sit at room temperature for 2 hours but should be returned to the refrigerator. It will be good in the fridge for a week or in the freezer for several months.

A unique feature of Cool Whip is that you can thaw and refreeze it up to 5 times. Cool Whip does not have a high percentage of milk product in it, although it does have some.

Aerosolized whipped cream is mainly cream with a bit of sugar and propellant added. It can sit out at room temperature for a couple of hours but will be better in the refrigerator.

You should not freeze aerosolized whipped cream. For the best result, rinse and dry the nozzle before returning it to the fridge.