How Long Can Corned Beef Sit Out? [Cooked Vs. Uncooked Varieties] 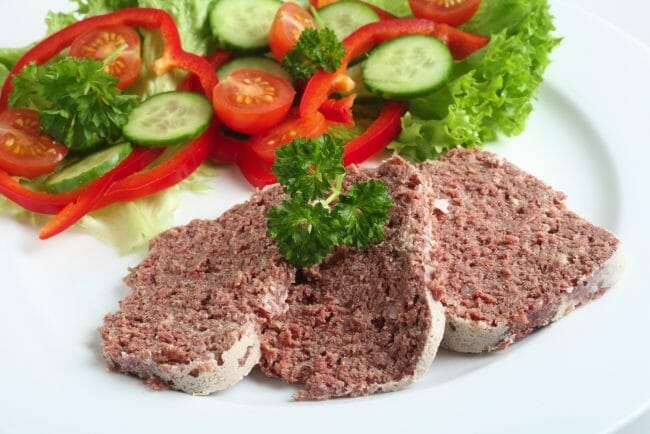 Corned beef and cabbage is a dish that is more synonymous with Irish-Americans than with Ireland itself.

This cut of meat is typically served around St. Patrick’s Day, and it’s used to make a delicious hash. So, how long can this cured meat sit out at room temperature before going bad?

Whether your corned beef is homemade, store-bought, or mixed into a hash, it can only sit out for 2 hours. Corned beef or anything made with it that sits out for longer than 2 hours moves into the Danger Zone set by the U.S. Department of Agriculture. This zone is a temperature area that sits between 40 degrees Fahrenheit and 140˚F.

Corned beef and corned beef hash left in the Danger Zone can become a breeding ground for bacteria. Harmful bacteria multiply rapidly in this zone and can cause food poisoning. Even though corned beef is cured, it is still susceptible to toxins.

What Is Corned Beef?

When first hearing of this dish, your mind might have gone directly to corn. While our favorite yellow veggie is deliciously roasted, it has nothing to do with corned beef.

The term “corned beef” refers to a specific cut of meat cured with salt the size of the kernels. That’s where it gets the name.

This style of cooking was invented in Ireland, but they rarely used beef. Cows were sacred and used in the fields.

Still, the Irish would salt their meat with “sea ash” for preservation. We have refrigerators now, but before they were invented, people had to use other methods.

Corned beef refers specifically to a specific cut of meat, which is brisket. This staple was perfected by Irish immigrants in the North Eastern region of the United States.

The brisket was inexpensive, and the immigrant used methods familiar to their culture. And the St. Patrick’s Day staple was created.

How Is Corned Beef Made?

To make corned beef from scratch, you need a brisket, a ton of seasonings, and at least a week and a half.

Corned beef requires creating a brine and letting your brisket soak in the fridge.

To mix a brine, you need the following ingredients.

Mix it all in a pot and bring it to a boil. Then let the brine cool to room temperature. Put your brine in the fridge and let it cool until it’s cold.

Submerge your brisket in the brine. It must be covered, so you may need to weigh it down.

Cover it tightly and let it sit in the fridge for five to seven days. You should mix the brine and turn the meat every day.

After the seventh day, take your brisket out and rinse it well with cold water. Then put it in your roasting pan or crockpot and let it simmer on low for eight hours.

You’ll know when the corned beef is done because it will separate with a fork.

Take it out of the crockpot and let it rest on the cutting board. You can use the leftover liquid for simmering cabbage.

How Long Can Corned Beef Stay In The Fridge Before Cooking?

There are mixed opinions on this subject. Alton Brown of the Food Network says to let it soak for ten days.

But the University of Minnesota` says it’s good for five to seven days. If you’re creating the brine yourself, it’s best to follow the recipe instructions.

If you’ve purchased an uncooked corned beef in brine, follow the package instructions.

You can skip many steps if you purchase an uncooked corned beef already soaking in a brine.

Consumers can find sealed packages of corned beef soaking in the meat section of the grocery store.

Which is better? Well, we always advocate for homemade. When making your brine, you can tweak the seasonings and create a flavor you love.

But, purchasing one already soaking is a way to avoid some hard work. The store-bought brands are usually delicious and require less hassle.

There are also corned beef options in the deli that have already been cooked. All you need to do is grab a number or find a package in the refrigerated section.

Purchasing corned beef that’s already prepared is a great way to get a fast Irish meal.

All corned beef can become the playground for harmful bacteria if left out of the fridge for longer than 2 hours.

If you left the meat sitting out, it doesn’t matter what stage of preparation. You should throw it away and avoid any possible foodborne illness.

How Long Cooked Corned Beef Last In The Fridge?

Sometimes you cook the corned beef too soon and need to store it. Other times you’ve made more than you need and want to keep it.

We all know the best place for storing this delicious meat is in the fridge. Once you have your leftovers in the refrigerator, you have three to four days.

Food that sits in the refrigerator is still at risk for contracting harmful bacteria. The bacteria grows in cooler temps but not as fast.

That’s why it takes days for the bacteria to multiply. Even if you have your corned beef in airtight, shallow containers, you shouldn’t eat it after four days.

Creating hash with corned beef is one of the tastiest ways to use up your leftovers. It’s simple, and you can use one pan, which means less clean-up.

First, parboil your potatoes. Bring a pot of water to a boil. Add your whole, washed potatoes.

Once you can pierce them easily with a steak knife, pull them out. Let the potatoes cool. When your potatoes are cool, dice them. Now it’s time to make your hash.

Take a pan and add your butter. Keep the flame on medium and add your onion. Let that cook for two minutes and add the garlic.

Let that cook for another minute and add your potatoes. Let the potatoes cook until they’re starting to get brown. Then add your corned beef. Let it all fry until it’s the crispiness you desire.

Serve with a sunnyside egg on top and toast.

Don’t want to go through the trouble of making your hash? That’s okay. Cans of premade hash are typically available at the store.

While we love home cooking, a can of Hormel corned beef hash is delicious, especially when fried to a crisp.

When it comes to storage, there is no difference. Homemade corned beef hash and the canned version are only good at room temperature for 2 hours.

Once they go past that point, they move into the dreaded Danger Zone, where bacteria multiply rapidly.

The best place to store corned beef is in the refrigerator. The same goes for hash. Leftovers of all kinds are best stored in airtight containers.

Corned beef and corned beef hash are good in the fridge for two to four days. If you’ve gone longer than four days, we suggest throwing it away.

While none of us likes to waste food, the bacteria that cause foodborne illnesses can be severe. Food poisoning can lead to abdominal pains, dehydration, and even hospitalization.

Most people love this dish except for vegetarians, vegans, and those who don’t eat beef. Why is it so popular? Because the preparation of it is relatively simple and it’s an age-old tradition.

Curing meat with salt was popular before refrigerators because it helped with preservation. Now, we love corned beef because it tastes fantastic and has so many uses.

Corned beef isn’t only served with cabbage or minced for hash. There are so many other ways to use it. You’ll want to eat corned beef all year long. Here are some of our favorites.

Corned beef on rye with mustard is a great sandwich. A Reuban is a sandwich made with corned beef in mind.

A Reuben comes toasted and includes sauerkraut, Swiss cheese, and Russian dressing. They can come toasted or seared in a pan like a grilled cheese.

Have you ever roasted Brussels sprouts with bacon and pine nuts? Well, you can substitute corned beef to add a unique flavor and something new to the dinner table.

Corned beef and cabbage work well together with chicken broth. All you need are some leftovers and a bit of creativity.

Mix corned beef and cabbage with some cream cheese and blend it well in a mixer. You can add mayo to make the dip less dense.

Don’t forget to add the pepper and top it with some Russian dressing. Serve it with rye toast ends for a Rueben dip.

Quiches are an excellent way to make the best of leftovers. All you need are some eggs and a good pie crust.

Don’t forget to season your egg mixture when creating a quiche. You can add some red peppers and green onion with this for color and flavor.

Corned meat was invented for preservation’s sake. It was taken to a new level in the States. Now corned beef is a dish served everywhere on March 17th.

The essential thing to remember is that all of these creations are susceptible to the Danger Zone.

So get them all into the fridge within that 2-hour limit. Otherwise, you can cause health issues for you and your loved ones. It’s always best to be on the safe side.