How Long Can Deli Meat Be Left Out? [Plus Tips For Freezing & Reheating] 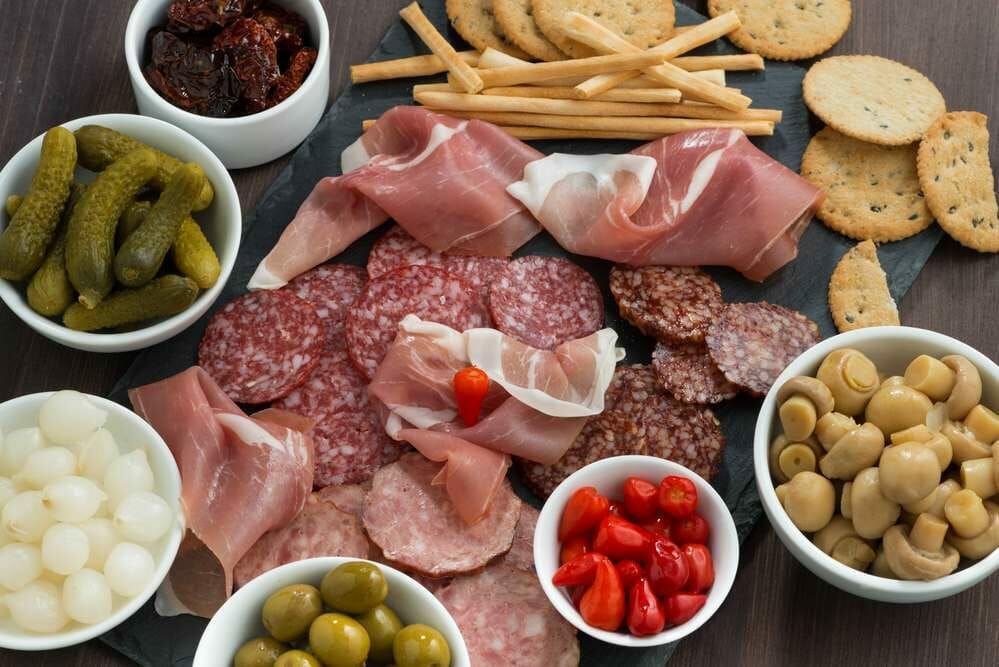 Many of us choose to make a deli sandwich when it comes to simple, fast lunches. The variety of meats available at the deli provides plenty of spice to the everyday lunch box.

But, you’ve accidentally left your deli sandwich on the counter for a few hours, and now you need to know – is it safe to eat?

Generally, you should not consume smoked or deli meat left out at room temperature for longer than two hours. Instead, you should keep fresh and pre-packaged deli meats in the fridge until you are ready to eat them.

Unopened fresh and pre-packaged deli meats within their sell-by or expiration date can last two weeks in the refrigerator, and opened packages last about one week after opening.

However, dry-cured deli meats like salami and pepperoni can sit out at room temperature for up to six weeks when unopened and last about three weeks in the fridge. 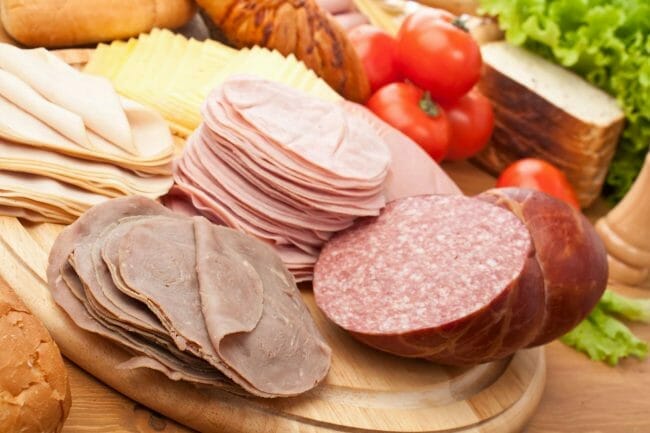 The development of bacteria in food occurs whenever food is in the “Danger Zone,” which the USDA determines sits between 40 degrees and 140 degrees Fahrenheit.

Because room temperature is within that zone, it’s essential to refrigerate any perishables that you don’t plan on serving or consuming within the next few hours.

The Danger Zone timeframe shrinks when foods get left out in 90-degree plus temperatures. If the A/C is down or food has sat out on a picnic table in the heat, toss it after one hour to prevent any food-borne illnesses.

A Note On Cured Deli Meat Left Out Overnight

Cured deli meats occasionally qualify as “Shelf-Stable.” Shelf-stable meats can sit out at room temperature for weeks to months at a time. However, whether cured deli meats are shelf-stable before or after opening varies. 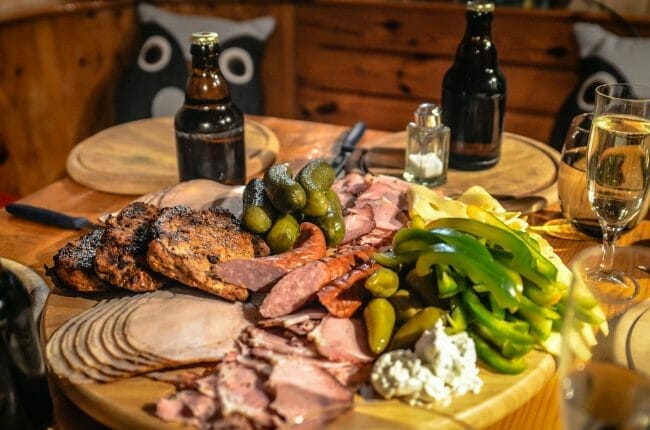 How Long Can A Deli Meat Sandwich Sit Out Of The Fridge?

Deli meat sandwiches are a staple in many lunch boxes. But, they introduce a lot of variables to keeping the sandwich at room temperature, thanks to the addition of ingredients like cheese and mayo.

However, the general rule of thumb is to toss any meat, dairy, or egg products that have sat out more than two hours at room temperature.

Different Types Of Deli Meat Preservation And Their Shelf-Life

Deli meat preservation methods come in various forms, and each one has its own general shelf-life.

Dry-cured deli meats have existed for thousands of years. You’ll recognize many of them, like hard salami and pepperoni, because of their popularity on charcuterie boards and sandwiches. Many dry-cured types of meat are shelf-stable.

Many can stay out at room temperature overnight without risk to the consumer because dry-cured meats have salt or another drying, acidic ingredient applied to dry the meat out. These ingredients create an inhospitable environment for bacteria to grow.

That said, most manufacturers will recommend dry-cured meats stay in the fridge after you open the package to prevent moisture development and exposure to bacteria.

In the meat department, you’ll recognize pre-packaged deli meats as the easy-to-grab box of ham, turkey, etc. These meats usually come flavored with sugar, salt, or from the smoking process.

You’ll get fresh deli meat straight from the deli counter at a grocery store. The butcher will slice and dice the meat for you before packaging it up.

Deli counter meat tends to have fewer preservatives than pre-packaged meats, and therefore, does not last as long in the fridge. Ensure to consume fresh deli meats within six days of purchase, and never leave them out at room temperature for more than two hours.

When strolling down the deli section of the grocery store, you’ll find dozens of types of meat available for your next charcuterie board or deli sandwich. Popular types of deli meat include:

Usually, turkey meat comes smoked with woods like applewood and hickory or flavored with honey. You can purchase turkey as pre-packaged or fresh from the deli counter. 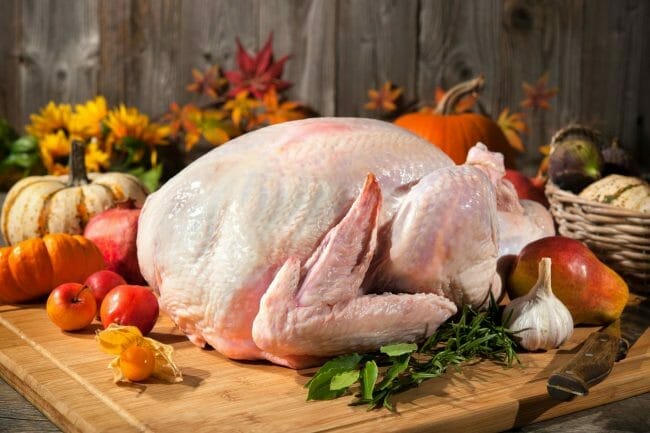 Most ham options come flavored with honey, maple, or wood smoked. You typically will find ham pre-packaged or offered fresh from the deli, however, some variations like salt pork may come dry-cured.

A popular Italian deli meat option, you can find salami pre-packaged, fresh from the deli, and in dry-cured sausage. Usually, fresh and dry-cured salami has better nutritional quality than pre-packaged options.

This spicy Spanish sausage is a favorite in Hispanic cooking. You’ll typically find it pre-packaged or fresh at the deli counter. 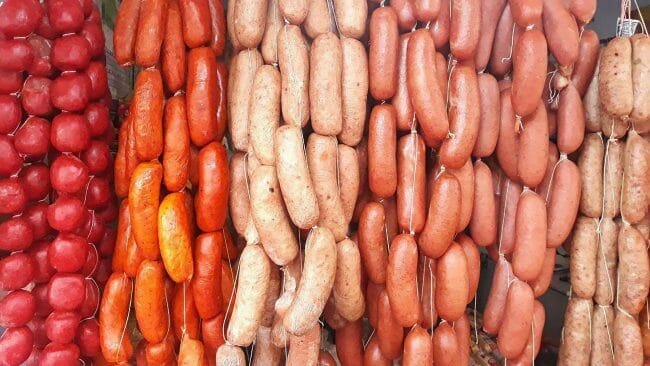 Another versatile deli meat, pepperoni, comes in pre-packaged, fresh, and dry-cured variations similar to salami. Usually, you can find all three variations in the grocery store.

A more expensive Italian deli meat, butchers marinate Coppa in red wine and spices while curing the meat. Coppa is salt-cured and air-dried, meaning you’ll usually find it either as a sausage roll or behind the deli counter.

Popular for sandwiches, you can usually find roast beef as a pre-packaged or deli fresh option. Roast beef is not generally dry-cured.

Generally processed as either thin layers or “carving board” style, you can typically purchase chicken fresh from the butcher or pre-packaged. Deli chicken tends to have smoky flavors.

If you’re worried that deli meat has sat out too long on the counter, there are several signs that can confirm your suspicions. Note: it’s never a good idea to “test” suspect deli meats by eating them; even a single bite of rotten meat can give you food poisoning or other bacteria-caused illnesses. If you are highly concerned about the deli meat’s safety, throw the meat out to ensure your peace of mind.

Deli meat that has sat out of the fridge too long often becomes warm or lukewarm to the touch. When deli meat isn’t chilly to touch, it indicates that it has become warm enough to support bacterial growth.

If deli meat has grown slimy, rubbery, or falls apart easily, you need to throw it out. This change happens because texture degrades as bacteria grows and the deli meat remains exposed to room temperatures.

Your nose is an excellent judge of quality. Bacteria tend to give off a foul smell as they start to develop, so if the deli meat smells bad or off in any way, don’t eat it.

If the deli meat has changed colors, developed new colors, or faded into a whitish or green coloring, it’s not safe to eat. Coloring changes can indicate bacterial or mold growth in the food.

If your deli meat doesn’t have the usual signs of expiration or rotting, check the dates listed on the packaging. Note, manufacturers are not required to list an expiration date on deli meats, and most will use Use-By or Best-By date to inform the buyer of the item’s estimated shelf-life.

Sell-By dates are the dates stores use to identify when they must sell a product or remove it from the sale floor. If you purchase items past their sell-by date, the USDA notes that you should consume them within the next few days.

Use-By or Best-By dates provide a better picture of when deli meats will stop tasting good and are more likely to go bad. While these dates are not expiration notices, they do tell you when the meat will lose its texture, flavor, and nutritional value.

You should freeze or consume deli meat within the use-by date to get the best value out of the meat.

You do not need to throw out deli meat past the use-by date. Instead, check for signs the meat has gone bad. If the package is unopened, you can safely keep it in the fridge for up to two weeks before eating it.

However, if you have opened the package, you should consume the deli meat within a week, regardless of the Use-By or Best-By date.

Eating rotten or bad deli meat can lead to food poisoning, an illness that can cause diarrhea, upset stomach, and nausea. In addition, pregnant women who consume rotten deli meat can get a listeria infection which may harm them or their unborn children.

Always check the manufacturer’s safe handling instructions for deli meat. Some, like hard salami, may recommend storing the meat at room temperature in a cool, dry place until opened. Others will recommend refrigeration.

Unopened deli meat packages can stay in their original packaging without any problems. However, the USDA recommends packaged lunch meat remain in the refrigerator no longer than two weeks before opening.

Opened deli meat packages generally need storing in the fridge. They can sometimes stay in their original packaging if the packaging reseals.

If it does not, place the deli meat in a zip-lock baggie or Tupperware to protect the food from cross-contamination and bacteria. The USDA recommends you only keep open deli meat packages for only three to five days in the fridge before tossing them out.

Interestingly enough, you can freeze deli meat! However, the FDA recommends not freezing the meat for more than two months before thawing and consuming the meat.

After the meat has thawed, you should never re-freeze it. Additionally, you should consume the thawed meat within three to five days.

Just make sure the deli meat reaches 165-degrees Fahrenheit and steaming hot before consuming the meat if you are pregnant.

If you want to avoid a soggy sandwich, consider heating the deli meat by itself in the microwave or using a toaster oven to heat and toast the sandwich evenly. Note that if you are reheating a sandwich that was previously hot, its texture may change.

In addition, liquids from any meats, dairy, or sauces may seep into the bread and cause it to become soggy.

If you take your deli sandwiches, charcuterie boards, or snacks to work or on trips, you’ll want to make sure and pack them correctly. Just throwing the deli meat in a lunch box won’t keep it safe to eat.

If your deli meat has grown warm, the ice pack has completely melted, or the lunch box sat in the sun for several hours, don’t take the risk and eat the meat. It may have developed bacteria that can lead to food poisoning.

Deli meats are one item you should never leave out at room temperature for more than two hours. If you want your deli meat to last for several weeks, always keep it refrigerated, or consider freezing it to extend its storage shelf-life.

As always, if you are in doubt of the deli meat’s safety, throw it away; it’s always better to be safe than sorry.