How Long Can Key Lime Pie Sit Out? [Find Out Now] 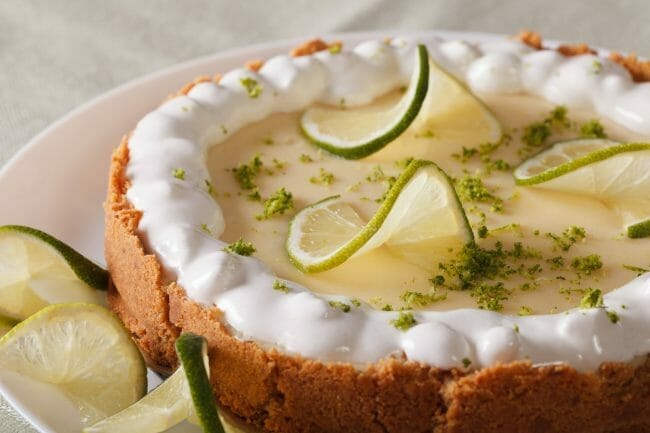 Key lime pie is a fantastic dessert that originates in the Keys, islands on the southern coast of Florida. You purchased a frozen one at the store and left it sitting on the counter.

Now you’re wondering about food safety and want to know how long can key lime pie sit out before going bad?

According to the U.S. Department of Agriculture, Key lime pie can sit out for a maximum of 2 hours. Key lime pie left out for longer than 2 hours moves into the Danger Zone. This is a temperature area where harmful bacteria can grow rapidly and cause food poisoning.

The Danger Zone sit’s between 40 degrees Fahrenheit and 140˚F. Key lime pie left in the Danger Zone should be considered unsafe to eat and discarded.

How To Make Key Lime Pie?

There are few things more satisfying than creating pie. Of course, this section speaks to the cooks.

If you don’t want to make you’re own, there are several store-bought options that are delicious.

We discuss those later. Homemade Key lime pie isn’t difficult and you can even purchase the crust to save some time.

Mix the condensed milk, sour cream, zest, and lime juice in a bowl until blended. The egg yolk gives it that color.

Pour the filling into the pie crust—Bake at 350˚F for fifteen minutes. The filling should be almost set and still a tad delicate.

Let it sit out for thirty minutes, and then transfer it to the fridge. It’s best when allowed to cool overnight. Top with whipped cream and enjoy.

How Long Can Key Lime Pie Stay Out At Room Temperature?

One of the essential steps to making Key lime pie is letting it get to room temperature before putting it in the fridge.

But, every recipe we’ve researched feels it should reach that point in no more than thirty minutes. Since the FDA says letting food sit out longer than 2 hours is at risk of bacterial infestation, we say the same.

A key lime pie that has been pulled out of the oven should not sit on your counter for longer than 2 hours.

This is the best place for bacteria to grow, and foodborne illnesses should be taken seriously. Food safety regulations are set for a reason, and we suggest always staying on the side of safely.

How Long Will Homemade Key Lime Pie Last In The Fridge?

Now that you’ve made your pie and served it to your guest, you have leftovers. How long will those pieces last in your refrigerator?

Homemade Key lime pie lasts in the fridge for four days. After the fourth day, we suggest disposing of your leftover pie.

Foodborne illnesses can cause severe symptoms like abdominal pain and dehydration.

Some cases are so severe the sufferer winds up in the hospital. It’s always the best idea to play it safe. When in doubt, throw it out.

Can I Freeze Key Lime Pie?

You most definitely can freeze a homemade Key lime pie. It’s your best option for long-term storage conditions. All you need to do is seal it in an airtight container and place it in the freezer.

If you live alone and make a whole pie, you could cut it into separate slices and freeze them individually.

The best way to freeze them by piece would be in small containers. Then, when you want a portion, you can pull one out and let it defrost.

How Long Does Homemade Key Lime Pie Last In The Freezer?

Homemade Key lime pie will last one month in the freezer. After that, it may not be filled with bacteria, but it will likely lose its texture and flavor. That’s why freezing individual slices is a great way to go.

Can I Refreeze Key Lime Pie?

No. Once you’ve defrosted Key lime pie, you have to eat it or store it in the fridge. Freezing takes a toll on the moisture content in food. When you defrost and refreeze, the quality will suffer.

This is another reason why freezing them in individual slices is a great idea. For the best quality, you only want to freeze it once. Otherwise, the pie will lose its creamy texture.

When you’re ready to defrost your pie, we suggest you take it out of the freezer and let it sit in the fridge.

Defrosting food on the counter isn’t a safe option because the outside will reach the Danger Zone first. The inside could still be frozen, and the outside becomes riddled with harmful bacteria.

If you forgot and want it for tonight’s dinner, try to let it defrost at room temp for 2 hours and then place it in the fridge.

The defrosting process will get a head start, and it should be ready for later that evening.

If baking isn’t your thing, never fear. There are ample selections in the freezers at the supermarket for lovers of Key lime pie. Here are some famous names synonymous with frozen dessert.

The nice thing about frozen store-bought Key lime pie is the lack of work that it requires.

All you do is pull it out and let it defrost. Then you’ll have a delicious tarty yet sweet treat for you and your family.

We recommend following the instructions on the package. Some brands might say to let it sit out at room temperature for longer than the 2 hours suggested by the FDA. As we’ve shown, the Danger Zone is a scary place.

The choice is yours, ultimately. It’s worth mentioning that the makers of store-bought pies know what’s best for their product.

Now that we’ve covered the types of Key lime pie available to most readers, what’s the best choice? The answer to that question lies in your tastes.

Are you a person who enjoys the process of baking and creating? Or are you someone who has a preference for Key lime pie and wants it now?

Store-bought pies are best when you don’t feel like working too hard to get what you want. And it’s also a great decision when it comes to cleaning up. There’s none when you buy a pie that’s already prepared and frozen.

Honestly, dessert couldn’t be easier than this. But, there are likely preservatives, including high fructose corn syrup and palm oil.

When you make a pie, you get to feel a sense of accomplishment for having created something delicious. You also get to know what goes into that pie.

So, you can cut down on the high fructose corn syrup. But, there is much more work involved, and you risk possible failure.

Plus, the cost of ingredients is higher than a single frozen pie. As you can see, there are pros and cons to both options, and you may choose both for different occasions.

The one thing store-bought and homemade pies have in common is this fact. Both of them can only sit out at room temperature for 2 hours max. Once they are defrosted and move into the Danger Zone, bacteria can multiply quickly.

While wasting food isn’t good, food poisoning is not fun and can cause severe symptoms. Some illnesses caused by toxins found in spoiled food can lead to hospitalization.

The History Of Key Lime Pie

You can find this dessert in the freezer section of the grocery store thanks to the cook in a Key West kitchen.

A millionaire’s servant was the first to combine the ingredients to create this pie filling.

Now it’s found in every supermarket and several restaurants across the globe. The Key lime pie is typically served in a graham cracker crust with a whipped cream topping.

Are Key Limes Native To Florida?

While the pie is attributed to that region, the Key lime’s namesake ingredient is an import.

A man by the name of Dr. Henry Perrine was in Mexico and discovered this citrus gem. He believed they would grow well in the Florida Keys and imported them in 1835.

Farming in that region proved to be difficult and the lime industry has had its ups and downs. But they’ve been around long enough for the little green fruit to make its mark on the region.

When visiting the Florida Keys, you can find slices, whole pies, pie on a stick, and even Key lime gelato. There are also Key lime cocktails in every bar.

Key lime pie is refreshing, and it’s a crowd favorite. They work all year long, too, so you can serve one at a cookout or your holiday party.

What’s essential is that Key lime pie that sits in the Danger Zone is risky to eat. If it’s been out too long, throw it away. You’ll be better off for it.