How Long Can Coffee Creamer Sit Out? 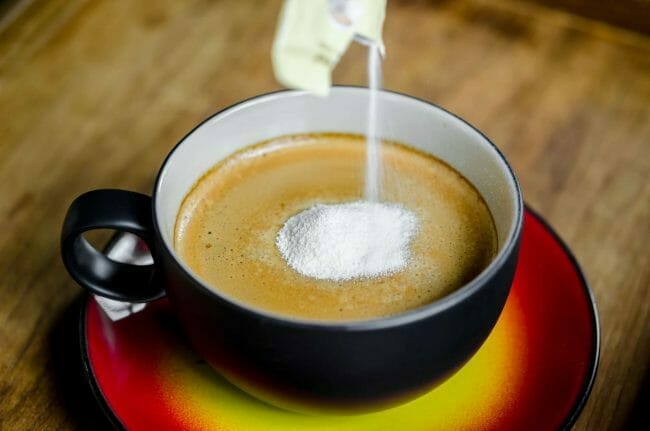 Creamers for your morning coffee aren’t always cream. Sometimes they’re made from dairy, but other times they’re dairy-free.

Creamers come in all types of flavors, and they even come in powder form. You walked into the office kitchen and saw the container of creamer on the counter.

Now you’re wondering, how long can coffee creamer sit out before going bad?

Generally speaking, all liquid coffee creamers, both dairy and non-dairy, can sit out for 2 hours. After that, liquid creamers move into the Danger Zone, which is between 40˚F and 140˚F. On the contrary, all powdered coffee creamers can sit out at room temperature for 18 to 24 months. Powdered creamers are free of moisture, which prolongs their shelf life.

The best way to preserve the shelf-life of powdered creamers is storage. They should be kept tightly sealed and in a dark space. Pantries and cabinets are ideal for storage.

Every type of coffee creamer typically comes with an expiration date. We highly recommend following the product guidelines for storage and shelf life.

As we’ve mentioned, there are several options when it comes to making your morning cup of Joe a bit creamier.

So many that we thought it would be a good idea to list them all here.

Did you ever wonder what half and half is? It turns out it’s a mixture of half milk and half heavy cream.

This mixture first came about in the early 20th century and has been added to coffee ever since. This creamer isn’t created directly from the cow. Producers at the dairy facilities mix it.

Half and half are used for so much more than coffee. It is used to make whipped cream, panna cotta, and mac and cheese.

Cooks and coffee drinkers all love it because it’s thicker than milk but thinner than heavy cream.

An open or unopened container of half and half can only sit out for 2 hours before it goes bad.

That goes for the half and half in your coffee and the original container. After 2 hours, it moves into the Danger Zone.

They look like cream, but they don’t have any milk products. There are tons of brands available, and we put together a list of the most popular.

These creamers are all unique and have their own set of ingredients. The ingredients in Coffee-Mate include the following.

Nutpods creamer is made from the following.

As you can see, there are some similar ingredients, but each of these brands has a unique recipe. If you love non-dairy creamers, it would be fun to try them all.

All non-dairy creamers that come in liquid form should not sit out longer than 2 hours.

Next, we have a type of creamer that can be found near most public coffee pots and in office break rooms. Here’s a list of popular non-dairy creamers that come in powdered form.

Creamers that come in powder form may or may not have dairy. The one ingredient that makes a difference is sodium caseinate, which is a milk derivative.

If you’re allergic to dairy, you’ll want to avoid powdered creamers that use this ingredient.

Whether they have a milk derivative or not, all powdered creamers can sit out much longer than liquid creamers.

Powdered creamers have a low moisture content, so they are good at room temperature for eighteen to twenty-four months.

When it’s fresh, milk stands for a bit because the parts with high amounts of fat will rise to the top.

This is where the phrase “cream rises to the top” is derived. This high-fat thick substance is heavy cream, and it’s fantastic in coffee.

There are downsides to heavy cream. It’s not the healthiest choice and has the highest fat content of all your options.

Heavy whipping cream will only last out of the fridge for 2 hours. This goes for any heavy cream you put in your coffee or the original container.
If heavy cream sits out longer than 2 hours, it quickly moves into the Danger Zone.

Whipped cream is a creation of heavy whipping cream, sugar, and vanilla extract. We typically eat it on sundaes, pie, or cake.

But a spoonful in coffee adds a creamy sweetness that’s hard to beat. Of course, with the addition of sugar, whipped cream is probably the unhealthiest choice on the list.

This kind of creamer is made with heavy whipping cream, so it can only sit out for 2 hours. Otherwise, it’ll move into the Danger Zone and can become riddled with bacteria.

Milk isn’t the most popular choice for coffee creamer, but it works in a pinch. It’s thin, so it won’t make the coffee creamy, but you’ll get a decent dairy flavor.

Whole milk will add more milky flavor than 2%. But they all work fine, and sometimes you want a thinner creamer.

Because milk of all kinds is dairy products, they can only be kept out at room temperature for 2 hours.

If you leave the milk out longer than 2 hours, it should be thrown away. The risk of food poisoning isn’t worth it.

This type of milk isn’t a dairy product. The milk is pressed from almonds, and it’s an excellent alternative to dairy milk if you’re dealing with lactose issues.

You can find cartons of almond milk in the dairy section in several flavors to enhance your coffee.

Almond milk can only sit out for 2 hours before going bad. The moisture content is high, and bacteria multiply quickly in the Danger Zone.

Soy milk is made from soy and is another choice for people who can’t have dairy.

It works well with coffee, too, and has a ton of protein. It’s a much healthier choice than heavy whipping cream.

Since it’s free of lactose, soy milk is perfect for those who have bad reactions to dairy. But, the moisture content is high, so that means soy milk only has 2 hours at room temp before going bad.

Cashew milk is made from cashews, and it’s another fantastic alternative for people avoiding dairy.

It will cream your coffee well and has only two grams of fat, so cashew milk is a much healthier choice.

Like all other high moisture milk, cashew milk can only sit out of the fridge for 2 hours. Any longer and it quickly moves into the Danger Zone where harmful bacteria multiply.

Made from oats, this type of milk or creamer is another fantastic choice. Its creamy texture will give your coffee the consistency you want.

It’s low-fat, low in calories, and based on plants, so oat milk is perfect for vegan diets. If you’re gluten-free, there are varieties made from gluten-free oats.

Still, oat milk has a high moisture content, so it’s only good out of the fridge for 2 hours.

Any longer, it also moves into the Danger Zone fast and could cause foodborne illness. This goes for oat milk in your coffee or the original container.

Coconut milk is another option that works well with coffee. It’s another healthy option and is plant-based.

You can find it with the other non-dairy milk in the grocery store’s refrigerated section.

Due to the high moisture content, coconut milk is only suitable for 2 hours out of the fridge.

If you let coconut milk sit in your coffee for longer than two hours, throw it away. If you let the original container sit out longer, throw that away too.

Dairy-Free Half And Half

These types of half and half are made with plant-based ingredients like almonds or coconut milk. They thickened and are an excellent option if you’re trying to cut out dairy.

Still, they are only good sitting out at room temperature for 2 hours.

The Danger Zone is just as harmful to dairy-free half and half. Harmful bacteria can increase swiftly and cause food poisoning.

Some creamers will indicate when they have spoiled by giving off a bad smell or changing color. Sometimes the signs aren’t there, so adhere to the expiration date.

How Long Will Creamer Last In The Fridge?

How To Freeze Coffee Creamer

If you have a ton of creamer, pour it into ice cube trays and let them freeze. Then you can pop them out of the tray and keep them in a ziplock freezer bag.

Then, all you have to do is put a few into your hot coffee and have a delicious treat!

Adding creamy flavor and texture to our coffee isn’t that difficult. There are tons of options for every taste and possible food allergy.

The critical thing to remember is that none of the liquid creamers can sit out for longer than 2 hours.

Otherwise, they will be at risk for bacterial infection. Powdered creamers have a longer shelf-life at room temp if refrigeration is an issue.