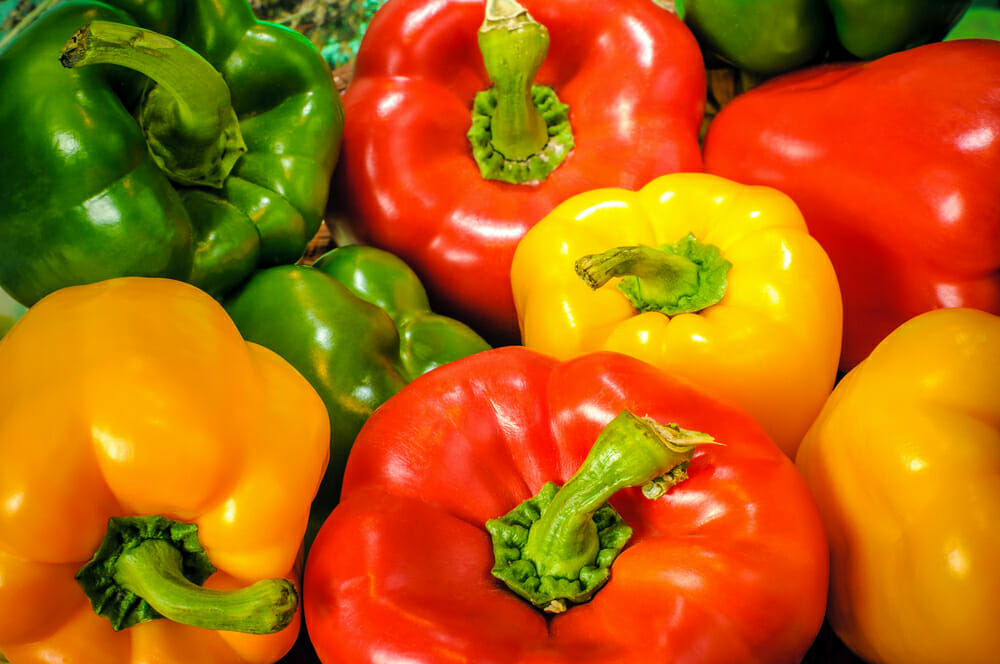 Fresh bell peppers give your food an incredible flavor and color and are used in many recipes globally. Other than the awesome taste, they are a healthy choice with low calories and a rich concentration of vitamins.

So, it is a culinary vegetable you would always want in your kitchen. But how long do bell peppers last?

What happens if you only have a freezer, though? Or you don’t have a refrigerator and plan to store your bell peppers at room temperature?

Find out how to keep your bell peppers fresh for as long as possible.

How Long Do Bell Peppers Last in the Fridge?

Red, yellow, and orange bell peppers can maintain their fresh taste and nutrients for two weeks when stored in a fridge. Green bell peppers will last for a week longer.

Some people argue that green bell peppers are the unripe form of the others and the colors change as they become ripe.

This claim is not true as the different colors of bell peppers come from different plants. Green bell peppers are sometimes unripe red or yellow peppers, though.

Most people opt for fridge storage as it keeps the bell peppers closest to their natural state.

While freezing might make the bell peppers last longer, they will lose most of their crispy texture.

Therefore, if you would use your red, yellow, or orange bell peppers within a week or two, it is best to store them in a fridge.

How to Prepare Bell Peppers for the Fridge

You have to dry the peppers with a clean dish towel to remove any moisture or dirt. Once the pepper is dry and clean, you store them in the crisper drawer.

Don’t just pour the vegetables directly into the fridge crisper drawer unless you will use them within a week.

If not, put the bell peppers in a vegetable mesh bag (produce bag). This bag has holes that allow the peppers to breathe and maintain their freshness.

You can always reuse the mesh bag for your next bell peppers, and they are super affordable.

You can use a regular plastic bag if you don’t have one. However, you will need to leave the bag unsealed to keep the vegetables fresh.

Don’t forget that your bell peppers last as long as their quality from the market, though.

Bell peppers with firm skins and a green stem without wrinkles would last longer than ones with soft, wrinkled skin.

So, look out for firm skins next time you go bell pepper shopping!

How Long Do Bell Peppers Last in the Freezer?

How to Prepare Bell Peppers for Freezing

In preparing bell peppers for the freezer, you need to remove the seeds and stem. When you want to use the peppers, you don’t have to go through removing the unwanted parts in a flabby vegetable.

You only have to thaw and eat or cook when you cut the peppers before storing them in a freezer.

So, the first step to storing your bell peppers in a freezer is to cut them into any size you want.

Place the cut bell peppers on a cookie tray with a parchment or wax paper underneath and freeze for about 1 to 2 hours.

This freezing would keep the peppers from sticking together in the bag.

Once that is done, pour the bell peppers into a freezer bag or airtight container. Frozen bell peppers can last longer, but that doesn’t mean you should forget them in your freezer.

How to Defrost Bell Peppers

Bell peppers are easy to defrost, like any other vegetable. If the peppers are chopped, you can easily throw them into your pot directly without defrosting.

Note that it will be a bit mushy. However, if you want to defrost, take the following steps.

How Long Do Bell Peppers Last at Room Temperature?

Bell peppers last for only a day or two when stored at room temperature. If you use the red, yellow, or orange bell peppers the next day, you can leave them on the countertop without a problem. Green bell pepper might last a day longer.

However, it would be best if you took care not to expose them to water, sunlight, or heat. Moisture makes it easier for the peppers to rot.

Therefore, you dry off any moisture before storing it in the fridge. Clean the peppers with a tissue or towel if it had come in contact with water.

Sunlight and heat would lead to discoloration and a loss of flavor. You would also not get the most of the nutrients contained in the peppers as they would be lost.

Therefore, the best place to store bell peppers at room temperature is a cool and humid environment of about 45 to 55°F.

So, it can retain its inner moisture without any outside moisture acting on it.

With the right environment, like a cellar, these peppers can last for up to five days at room temperature before it starts going bad.

If you want to use the bell peppers for longer, explore other storage methods like a fridge or freezer.

Note that this method of storing at room temperature is for whole bell peppers. If you have cut your bell peppers, it’s best to explore other storage methods.

How Long Do Bell Peppers Last Once Cut?

Bell peppers can last for days or months, depending on how you store them. Once you have cut your bell peppers, you cannot store them at room temperature.

Raw bell peppers are 92% water and begin to leak this moisture when cut, making it go bad faster. Store them in a fridge or freezer once you have cut your bell peppers.

When you store your bell peppers in a fridge, you can make them last for up to 4 days or more with a paper towel trick. Use the paper towel to absolve the moisture that will leak from the cut peppers.

You wrap the paper towel around the bell peppers and put them in an airtight container or plastic bag before storing them in the crisper drawer of your refrigerator. The tissue absolves the water, making the bell peppers last longer.

How Long Do Bell Peppers Last out of the Fridge?

Whether cut or whole, the bell peppers starts to wilt once it is out of the fridge. The skin of the peppers begins to get soft, and it loses nutrients.

Therefore, you don’t want to leave it out for more than a few hours before cooking.

If the temperature outside of the fridge is much hotter, the bell peppers are more likely to go bad faster. Temperatures hotter than 77°F will spoil the vegetables in no time.

Bell peppers can last for months and even years with the right storage. However, with poor storage, overripe, or spoiled bell peppers, it could go bad in hours.

The answer is that the longevity of the bell peppers depends on how you store them and the state of the peppers. It would be best to avoid bell peppers that show signs of going bad.

What Happens If You Eat Bad Bell Peppers?

Eating these kinds of peppers can cause food poisoning and other health risks as it begins to grow bacteria and mold.

You could experience nausea, vomiting, and other digestion problems. The mold might even cause more severe symptoms like respiratory issues.

Note that not everyone experiences these symptoms after eating bad bell peppers, especially if it was only a small quantity ingested.

However, you should avoid bad bell peppers as it can accumulate to something dangerous for your health.

How to Know Bad Bell Peppers

You can detect if your green, yellow, red, and orange bell peppers are not good for consumption from sight. You have to know the signs to check.

But first, you should know that your bell peppers are not bad if they have these signs;

However, you might want to throw out your bell peppers if you notice the following signs.

While bell peppers can get wrinkles while stored in the fridge or freezer, this degradation should not exceed a certain extent, or it has gone bad.

Once it starts to smell off or has mold, it’s best to throw it out and get fresh bell peppers.

Bell peppers, often called traffic light peppers, are available all year round. But, with the right storage, these peppers can last for weeks and months and still maintain their quality. Once you notice signs of spoilage, don’t hesitate to dispose of them.