How Long Can Flan Last In The Fridge Before Going Bad? 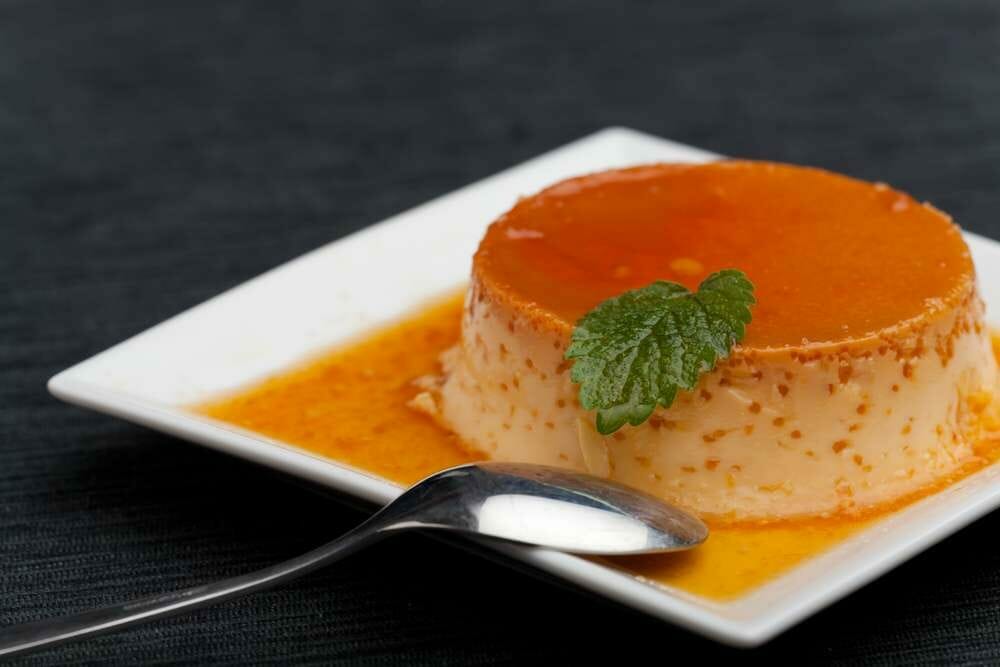 Flan is a popular dessert made of eggs, sweetened condensed milk, and cream or whole milk. You can add other flavors to it, like caramel, orange, or coffee.

Flan is typically served cold since the last step in the preparation process is refrigerating it for 4 hours or overnight, but it can also be served at room temperature.

Unless you are serving a large dinner party (or maybe a teenage boy!), you’ll have some leftover flan.

There are easy steps you can take to make sure your flan leftovers stay fresh so you don’t waste any of their smooth, sweet goodness.

Read on to learn more about how long flan lasts!

How Long Does Flan Last in the Fridge

When stored in the fridge, flan can last for up to three days. Flan is a custard dish, so it’s made of perishable ingredients that do best in the fridge.

It might keep as long as five days, but watch out for signs that it might be bad: a bad smell or a watery custard are two easy signs that you should throw the flan out.

To help your flan last in the fridge, it’s crucial that you store it properly. Before you put your flan away, wrap the flan in either saran wrap or wax paper.

Leave the top inch to inch and a half of the flan open so that the custard doesn’t get wet from condensation.

After you’ve wrapped the flan, you can leave it open or put it in an air-tight container. An easy way to store flan is to just keep it in the container that you made it in.

You’ll know if flan is bad when the custard layer becomes watery. The flan will smell unpleasant and the top foam no longer sticks to the rest of the flan.

How Long Does Flan Last in the Freezer

If your freezer settings don’t include temperature degrees, you can buy a freezer thermometer online.

Then, let your Flan cool on the counter before putting it in the freezer. If you put your flan in the freezer while it’s still warm, condensation can form on the top of the flan and become mushy once it defrosts.

Decide how much flan you want to eat at once. If you plan on serving the whole flan at a later date, you can put the entire flan in the freezer.

If you’re freezing leftovers or only want a small portion of the flan at a time to be defrosted, then cut the flan into pieces and freeze each additional piece.

To prepare your flan for freezing, lightly wrap the flan in freezer paper or multiple pieces of saran wrap.

Don’t use too much pressure when wrapping the flan or you could squish the dessert. After wrapping it with freezer paper or saran wrap, wrap it in a final layer of aluminum foil. Place all the flan in a Ziploc bag (or multiple bags if needed).

When you’re ready to eat your frozen flan, put it in the refrigerator the day before you want to eat it.

If you prefer your flan to be warm, you can put it on the counter and it will defrost in a couple of hours. Don’t unwrap the flan until it is fully thawed.

How Long Does Flan Last Unrefrigerated

Unfortunately, flan only lasts for two hours outside of the fridge. Because flan is made with milk and eggs, it spoils quickly if left outside of the refrigerator.

According to the FDA safe handling guidelines, any eggs or products with eggs (like custard) should be refrigerated within two hours.

And if the temperature outside is over 90˚F, flan should be refrigerated within an hour.

Since flan has such a short shelf-life, keep your flan in the fridge until it you are ready to eat it or serve it to your guests.

If you prefer your flan to be warmer, set a timer to make sure you don’t lose track of time and leave the flan out too long on the counter.

How Long Does Puto Flan Last

A puto flan is a little different from regular flan, and puto flan can last for three days in your fridge.

Puto flan is a mix of leche flan and puto. Puto is a Filipino steamed rice cake made with rice flour. When finished, the flan sits nicely on top of the puto, making it great finger food.

To store puto flan in your fridge, space them a little bit apart in an air-tight container so that they don’t spoil as quickly.

How Long Does Raymundo’s Flan Last

Raymundo’s flan is a popular flan variety available in stores like Wal-Mart, and Raymundo’s flan lasts seven to ten days if it is stored in the refrigerator.

In order to know if your Raymundo’s flan is good, check the expiration date on the packaging. If you can’t find the date, most store-bought flan lasts at least seven to ten days.

How Long Does Chocoflan Last

Chocoflan can last a little longer than regular flan, usually three to four days in the fridge.

Chocoflan is a dessert that’s chocolate cake on the bottom and vanilla flan on the top.It’s made in a bundt pan and because it is half custard, you must store it in the fridge.

Once your chocoflan has cooled, immediately store it in the fridge until you are ready to serve it.

How Long Does Caramel Flan Last

Like chocoflan, creamy caramel flan can last for up to four days in the fridge. To store it properly, tightly cover it with saran wrap or wax paper and place it on a flat surface in the fridge.

How Long Does Leche Flan Last

You can freeze leche flan to make it last longer. To freeze your leche flans, put them in an air-tight container.

They will last for up to one month and thaw them in the fridge overnight the day before you want to eat them.

How Long Does Costco Flan Last

Costco sells Marie Morin flan as a seasonal item, which lasts seven to ten days in the fridge.  You can usually find flan at Costco in the fall, around October/November.

You have to keep the flan refrigerated and you cannot freeze this type of flan. This flan comes in a pack of two in glass containers.

Check the box to see when this flan expires. If you can’t find the date, know that store-bought flan usually lasts from seven to ten days.

The box also states not to turn them upside down, so be sure to put the box directly into the fridge right-side up when you get home from Costco.

How To Properly Keep Flan to Extend Its Life

To extend the life of your flan, make sure that your appliances are at the proper temperature.

To ensure that your flan won’t go bad in the fridge, make sure the fridge is set to 40˚ F. If your fridge doesn’t say the temperature, buy a fridge thermometer so you can see.

Food keeps better in covered containers. To extend the life of your flan in the fridge, keep it in an air-tight container or a Ziploc bag. When putting food away, the FDA recommends not crowding the fridge too much.

The cold air won’t be able to circulate and so the temperature of the items in your fridge and or freezer will not be as well-regulated.

To store your flan in the fridge, the flan should be covered with wax paper or saran wrap that covers everything except the top inch of the flan’s surface.

This way, condensation doesn’t form and the top of the flan. Plus, the wax paper or saran wrap helps maintain the shape of the flan and keep it fresh.

If you need to extend the life of your flan for more than three to five days, just follow the steps above to freeze it.

How Long Past Flan’s Expiration Date Can You Eat It

Any time you eat expired food you risk getting sick. However, there is no hard and fast rule about expiration dates, and you need to use good judgment if you are going to try to eat expired flan.

According to the Cleveland Clinic, there are four distinct signs that your food has spoiled. Don’t eat flan past its expiration date if:

In addition, the USDA has different types of labels for food that don’t always mean expiration date. These are:

Make sure you are looking at the actual expiration date for your flan, not any of these other dates.

Can Flan Give You Food Poisoning

Flan is a custard-based dessert made with milk and eggs, so flan can give you food poisoning.

It’s important to prepare the flan properly. When cooking it in the oven, make sure the flan reaches an internal temperature of at least 160˚F.

You can use a candy thermometer to check your custard’s temperature before removing it from the oven.

Flan can also make you sick if you eat it after it has expired. Check for those four signs that your food has spoiled, and don’t eat it if it’s not good anymore.

There are lots of different flans to enjoy, and consume them following safe-handling guidelines to ensure your friends and family stay safe while enjoying these tasty treats.