How Long Can French Fries Sit Out? [Storage Tips] 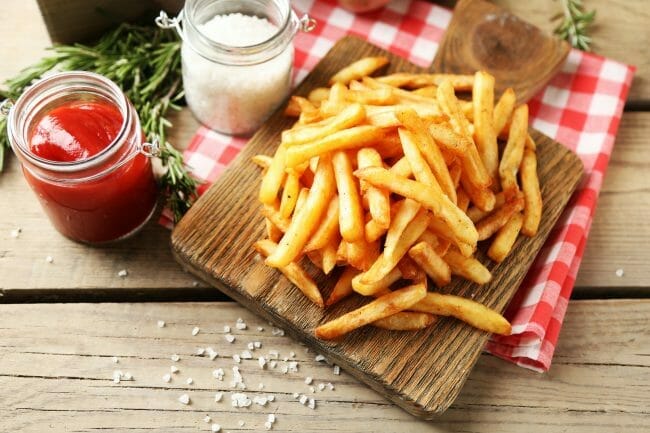 French fries are America’s favorite side dish. Due to this adoration, it’s not surprising that these tasty potato sticks are found on most dinner tables.

When everyone has run off to do something else, and you’re cleaning up, you may be tempted to grab a leftover fry, but then the question pops into your head. “How long can french fries sit out at room temperature?”

According to the United States Department of Agriculture, all foods, including french fries, head into the “Danger Zone” if left out for longer than two hours. The danger zone lies between 40˚F and 140˚F. Room temperature, which is typically 68˚F, falls right in the middle of this hazardous scale. If left out longer, you run the risk of foodborne illness.

How Long Can Frozen French Fries Sit Out?

Sometimes you order french fries in the drive-thru, and other times you make them in your kitchen.

Many people opt for the frozen kind because it saves time and they come out so crispy.

While you’re preparing dinner, you might be tempted to pull that bag out of the freezer and let it defrost on the countertop.

We strongly discourage you from ever letting anything defrost on your counter because when frozen foods thaw at room temp, the outside will reach the danger zone while the inside is still defrosting.

This gives troublesome bacteria a great place to multiply and gives you or your family to contract a foodborne illness.

As a person who loves to make frozen french fries at home, I discourage the idea of ever defrosting your potatoes before baking or frying.

They are made to be cooked frozen, so they will come out better if prepared according to the directions on the bag.

How Long Can Fresh French Fries Be Left Out?

Sometimes we like to cut up fresh potatoes and fry them. Homemade french fries are fun and delicious, but we still recommend not leaving any potato product out longer than 2-hours.

Bacterias will love it, but you will not be happy if you start coming down with the typical symptoms.

When making fresh-cut fries, they fry nicely in a cast iron pan. If you prefer to bake them, we suggest coating them lightly in olive oil, so they brown on the outside.

Can French Fries Sit Out Overnight?

Sometimes we don’t feel like cooking and decide takeout is the way to go. You could be enjoying a fun night with your boyfriend over burgers and fries, and you go to bed without putting the leftovers in the fridge. Would it be safe to eat old fries when you wake up in the morning?

No. Unless you took a quick nap and woke up within the 2-hour window, the USDA warns that it’s not safe to eat that french fry.

Toss them and get yourself some more when you head out for the day. The results of foodborne illness aren’t fun and could be more severe than you think.

Can I Prolong The Life Of My French Fries With Aluminum Foil?

Not safely. Many of us have experienced the baked potato covered in silver foil, but did you know that the combination of aluminum and potato baked is a considerable risk for botulism if it’s left out too long, specifically in that “Danger Zone” we talked about earlier.

When potatoes wrapped in foil reach a temperature between 40˚F and 140˚F, you could get seriously ill.

Like the Food and Drug Administration, experts advise skipping the foil all together when baking potatoes, so we recommend not taking a chance with french fries either.

Tip: The best way to bake potatoes is coated in olive oil with a touch of salt and pepper, whether whole or cut up like fries.

The skin of the potato will crisp nicely after baking in the open air of the oven. Skins wrapped in foil are moist and no fun to eat at all. Now we know it’s also dangerous.

How Long Does It Take For French Fries To Go Bad?

French fries start to move into the danger zone when they sit out at the two-hour mark.

All food moving into the temperature range between 40˚F and 140˚F are at risk for many bacteria that cause foodborne illness.

While your french fries might look fine and smell fine, they could still be infected with bacterial growth.

The symptoms and results of food poisoning could be mild or severe. It’s not worth risking your health or that of those you love for a few fries. When in doubt, throw it out.

Can You Reheat French Fries In The Microwave?

You can reheat french fries in the microwave but don’t do it to kill bacteria. While heat kills some bacteria, a few thrive in much higher temperatures than you or I could handle.

It’s a false notion that zapping it for a minute or two will kill anything on there. Don’t fall for it.

Also, microwaves don’t heat food evenly. Data sources say while microwaving food might kill some bacteria, other areas where it will be safe.

The only time you should reheat french fries in the microwave is when you pull them out of the cooler temperatures of the refrigerator and are still below that 40 degrees temperature mark.

How To Reheat French Fries

This is relatively simple. Put your fries on a microwave-safe plate and set them in the center. Cook them on high for a minute, and they should be ready to eat.

Just remember, they have to be pulled out of the fridge and go directly into the microwave.

If they have sat out at room temperature longer than two hours, throw away those extra fries.

Another way to reheat french fries is by baking them in the oven. A conventional oven will work too for leftover french fries.

Line a pan with heavy aluminum foil and bake at 350 degrees for ten to fifteen minutes.

The time duration will vary. Always be sure to check on them after ten minutes, and let them cook for five minutes more if they aren’t ready.

We did mention the risk of botulism growing on potatoes wrapped in foil. This is different.

When you bake them on an aluminum foil sheet, you’re saving some clean-up time. You risk taking your potato out of a safe level when you wrap it in aluminum foil.

As long as you transfer your fries to a plate before serving, you won’t risk contaminated food until that two-hour window.

Tip: Never microwave your food in the takeout container because they are typically made of plastic and might melt or seep toxins into your french fries.

How To Store Fries In The Refrigerator

When you’re done eating, it’s best to get all your leftovers into a sealed container and put them in the fridge.

While we’ve been consistently talking about getting food out of the 40˚F and 140˚F range, some bacteria will grow in the cold.

While these bacteria might not prompt a rapid emptying of the stomach, you might be laid up for a few days.

To a large extent, the risk of illness should be enough of an incentive to store leftover french fries correctly and use an airtight storage container.

Can I Use Plastic Wrap?

Yes. Fries can be covered in plastic wrap before being refrigerated. But we found that only restaurant-grade plastic wrap clings well enough to keep them safe from possible bacterial colonies on other foods like old dairy products.

How To Store Uncooked French Fries

Uncooked french fries are different than cooked when it comes to storing safely. If they’re frozen french fries, the best way to do it is to put them right in the freezer when you get home from the grocery store.

They have a shelf life of months, so you shouldn’t take them out until you are ready to put them in the fryer or oven.

We’ve all had those moments when we cut potatoes and realize we wouldn’t be cooking and don’t want them to start turning brown.

If you aren’t aware, when cut potatoes are left in the air too long, they turn brown from oxidization, a process that occurs when oxygen comes in contact with starches. Potatoes are high in starch.

If you still want to use an air-tight container, submerge the cut potatoes in cold water and store them in the fridge.

Be sure to cook them in a day or two otherwise, you should dispose of them.

How To Make The Best Quality French Fries

Deep fryers are the best way to make french fries, whether freshly cut potatoes or frozen.

If you want the great taste of frying but avoid high-fat items, try an air fryer. They offer all the crispiness without the oil.

It’s challenging to make potatoes as delicious McDonald’s fries, but keep reading, and we’ll give you one of our favorite flavor options.

If you like spicy foods, this combination will make for a great mix of flavors on your french fries.

All you need to do is cut up your favorite brand of hot pepper. Some popular varieties include jalapeno and serrano, but you can try habaneros if you like intense spice.

Preheat your oven to 350˚F. Cut up the peppers, and be sure to get rid of the seeds. Toss them with uncooked fries and coat them with olive oil, salt, and pepper. If you want to add some extra flavor, add a garlic clove or two.

Tip: Hot peppers will linger on your fingers, so wear gloves when cutting; otherwise, avoid touching your eyes or any other openings on your face.

Place the mix in a single layer on a baking sheet and cook for ten minutes. Pull them out and stir it all, so the other sides get a chance to cook on the pan.

Then let them cook until golden brown. Serve this at your next barbeque, and everyone will start calling your Dr. Potato.

French fries are rumored to have origins in Belgium, but they probably wouldn’t resemble today’s fast-food fries.

In the olden days, chefs didn’t have access to deep fryers and ovens. But we’re sure they still tasted delicious.

We’ve been lovers of french-fried potatoes for a long time, and the Devil is in the details, so get creative with those spices and create some delectable potatoes.