How Long Is Potato Soup Good For? 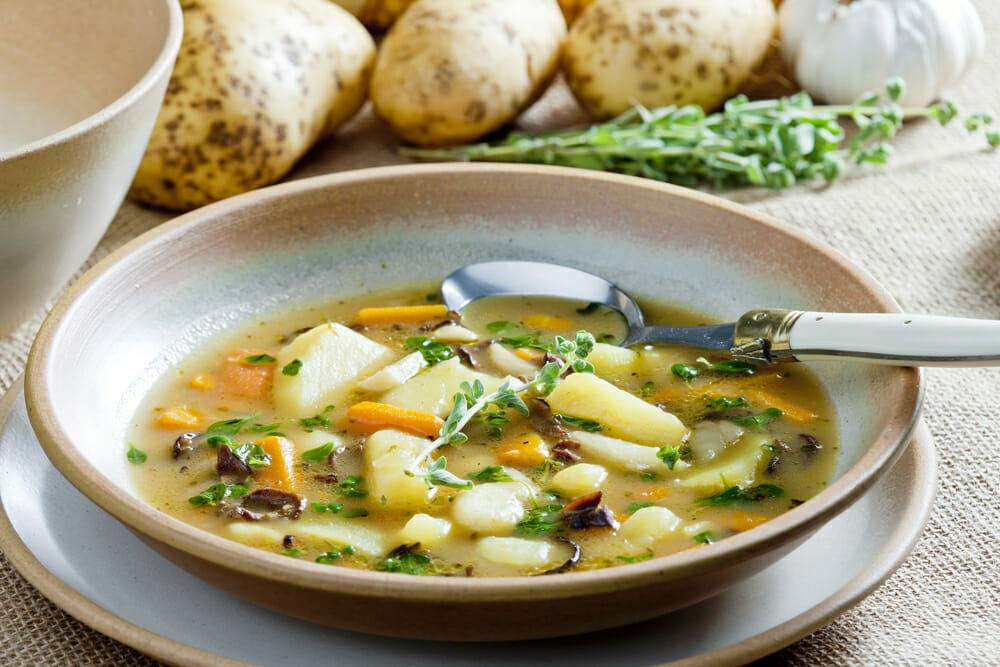 We love a nice warm bowl of potato soup, there’s nothing better on a chilly day. It’s a dish that consists of potatoes, creamy soup, and veggies blended into something magical.

Some people have a strict recipe they follow and then there are people like us who use whatever we have on hand to make a delicious soup.

The only issue with potato soup is that since it is cream-based, it has a limited shelf life.

All potato soup is good for roughly 3-5 days in the refrigerator, 4-6 months in the freezer, and only about 2 hours at room temperature. Unopened canned potato soup has a shelf life of 3-5 years but may remain safe to consume after that provided that it is stored properly in a cool temperature.

If you have a big family and you make a large batch of potato soup, you may have quite a bit leftover.

If this is the case, you may be wondering whether or not you can refrigerate, freeze, or leave it on the counter and for how long. This article will go over all of that and more.

How Long Is Potato Soup Good For?

You can store homemade and canned potato soup in the refrigerator for 3-4 days and in the freezer for 4-6 months.

If you have unopened cans of potato soup, they have a shelf life of 3-5 years or longer if stored in a proper setting.

If you have canned soup, check the expiration date. Chances are, your soup is still good if it’s expired or close to expiration.

If you want to ensure your leftovers keep their quality as long as possible, you should properly store them.

Properly storing your homemade and canned potato soup is the key to keeping it fresh for longer.

You can store potato soup in an airtight container in the refrigerator. The mode of storage is extremely important in preserving the shelf life of your potato soup.

Properly storing your homemade and canned potato soup is the key to keeping it fresh for longer.

A covered glass jar or airtight plastic container is the best way to store soup. We suggest glass though because it keeps the odor of other refrigerator items out.

The best containers are shallow and wide. This will help cool the food evenly. If you haven’t opened it yet, you can keep packaged or soup in its container.

If it’s been opened, transfer it to a glass jar or plastic container.

Don’t ever place soup in the refrigerator door as the temperature changes rapidly and can affect the shelf life of the potato soup.

If you are going to be making or preparing a creamier potato soup, you will need to plan ahead a bit. When the soup is about 75% cooked, remove it from the heat.

Separate enough soup for your current meal and continue to cook just that portion until it’s finished.

Whatever you plan on freezing or refrigeration for later consumption, don’t cook completely. This way, you can reheat your soup without the veggies becoming squishy.

The only exception to this is if you add any raw meat. Never half-cook meat as it can make you very sick, especially if it’s beef or pork.

Anything smoked or cured, like bacon or ham, is fine.

You should know that when you freeze potatoes, the water in them expands and it will break down.

When you thaw it and the water shrinks and will leave the potato broken down and mushy.

Make sure your soup is cooled for 2-hours before freezing it. It’s best to freeze the soup in single meal serving sizes.

Put the soup in a freezer-safe Ziploc bag or a glass Tupperware container. If you use a bag, seal it 90% of the way and then squeeze the rest of the air out of it so there’s an even layer of soup when laid on the counter.

You should lay it flat in the freezer until well frozen and then stand it up to make more room.

Frozen potato soup is best eaten within 6 months of freezing.

If you aren’t sure if you want to freeze your soup, you can refrigerate it first and put it in the freezer later.

Before you pop your potato soup in the freezer, you should put it in the refrigerator first.

The most important part of this process is to let it cool first, but only for about 2 hours. Anything after 2-hours and bacteria will begin to grow rapidly.

To give your potato soup a longer lifespan, pour it into a glass Tupperware container with an airtight seal.

Glass is the best material for liquids because it will protect your soup from other odors that may be in your fridge. Your soup will last 4-5 days in the fridge before you freeze it.

After removing it from the freezer for consumption, there are tricks to thawing it so the quality isn’t compromised.

The best way to thaw frozen potato soup is to put it in the refrigerator the night before you plan on consuming it.

Whether you’ve frozen smooth or chunky soup, there are a couple of steps you can take after you thaw it and before you serve it to get the best quality potato soup.

If you find yourself wanting to make the soup just a few hours before dinner, you can place your soup in a bowl or sinkful of lukewarm water.

This will reduce the time it takes to defrost your potato soup by a lot. If you have even less time to get your soup thawed, you can pour it into a large pot and slowly warm it up over low heat and stirring constantly.

If you’ve thawed or reheated your potato soup and found it odd-smelling or the texture isn’t right, you may have spoiled soup on your hands.

Spoiled soup can be spotted easily based on a strange smell, if it no longer looks rosy, has mold, tastes sour, or if there is bulging from the can if it comes prepackaged. These are all telltale signs that we’ll discuss further below.

Whether you’re removing it from the freezer, refrigerator, or can, your potato soup should smell fresh and pleasant.

If you begin to cook your soup and you notice a strange odor coming from your soup, it’s most likely spoiled.

Good potato soup should look rosy and inviting. If your soup no longer looks rosy, it might be bad.

There should always be a layer of fat covering your soup and it shouldn’t be cloudy. Additionally, you should also check for signs of mold.

If you see mold, throw it away immediately. Spoiled potato soup can cause botulism, according to the CDC. Botulism can paralyze the muscles needed for breathing if left untreated.

The smell and look may be on point, but if you put it in your mouth and immediately notice an off-taste, stop eating it.

The more of it you eat, the bigger risk you’re taking for bacteria consumption.

If your potato soup is from a can or prepackaged, you should check for bulging or swelling from the can.

If you notice this, it means your soup is spoiled. Not to mention, the bulging can compromise the packaging which may cause it to burst and invite more bacteria into the food.

Additionally, the canned soup will have an expiration date that will tell you when your soup stops being good.

The soup may still be good after the expiration date, but may not taste as good.

If you left your potato soup out on the counter, you may be wondering how long it’s good for.

Can Soup Be Left Out At Room Temperature?

Not for very long. Leaving your soup out for longer than 2 hours almost guarantees bacteria growth.

If you’ve forgotten about it, but manage to reach it within that 2-hour timeframe, you can put it in the refrigerator and it should be fine.

If you’ve made a nice warm pot of potato soup and can’t finish it, you may be tempted to leave it in the pot until you’re ready for more.

Or maybe you’ve simply forgotten about it as we do sometimes when things around the house get hectic. This may leave you to wonder if you can consume room-temperature potato soup.

There have been so many people with the same concern regarding the expiry of potato soup.

It’s perfectly okay to leave your soup on the counter for 2 hours to cool and then consume more of it. You can put it in the refrigerator or the freezer to preserve it.

It’s not good practice to consume soup that has been left out overnight as bacteria begins to grow after that timeframe at temperatures above 40 degrees Fahrenheit.

If you’re unsure of whether or not your soup is spoiled, check for the signs we mentioned above such as mold, odd smell, and strange texture.