How Long Can Pepperoni Sit Out? [Safety And Proper Storage] 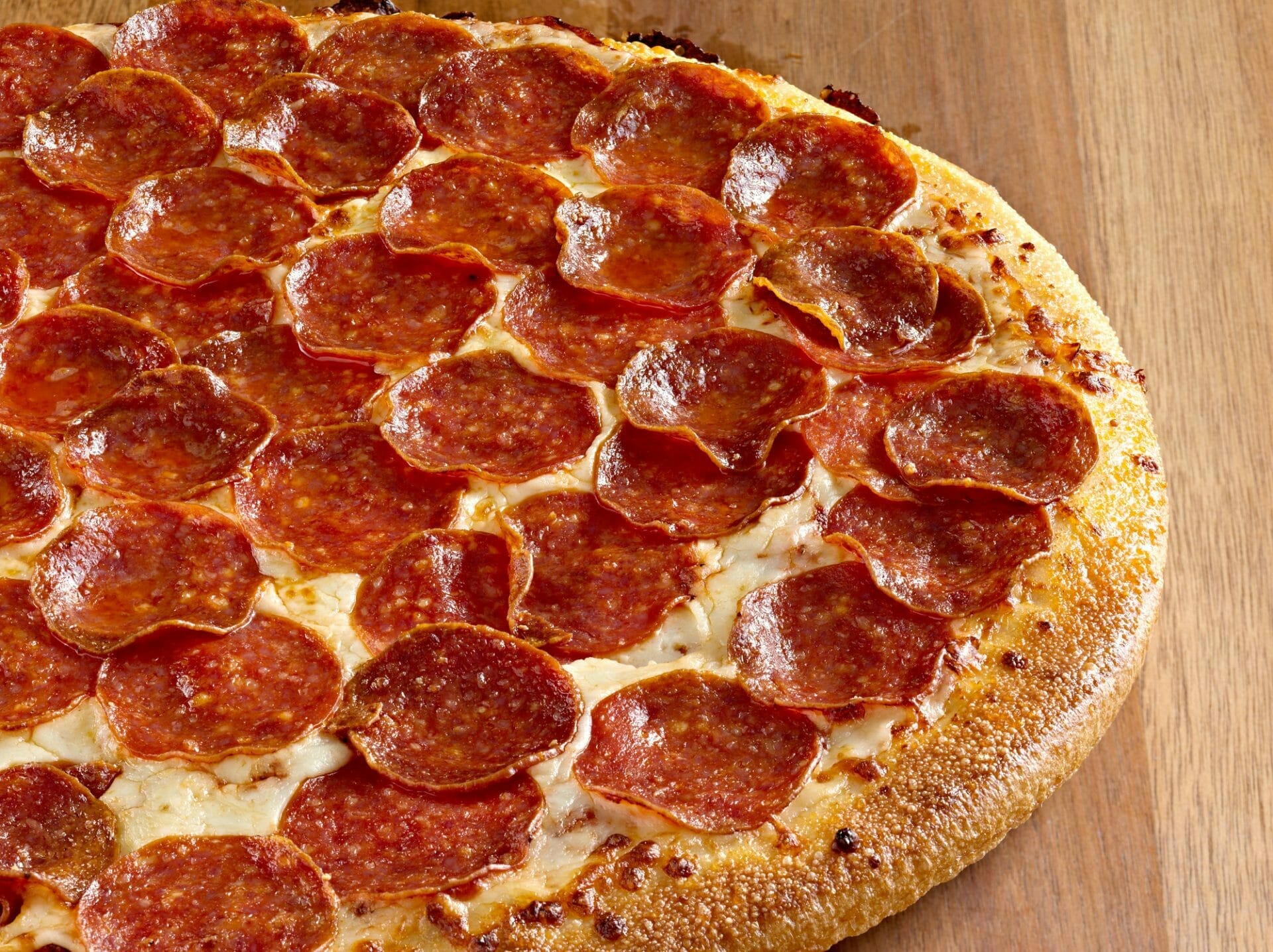 Who doesn’t love pepperoni? It adds flavor to so much more than pizza, which is why they sell it in nearly every grocery store in the United States.

You may have decided to start making your own pizzas, and in the thick of rolling out your dough, you realize that you left the pepperoni on the counter for hours. How long can pepperoni sit out?

An opened package of pepperoni can sit out for 2 hours and still be safe for consumption. According to the U. S. Department of Agriculture, perishable foods that are left out longer than 2 hours will enter the “Danger Zone.” This zone refers to any temperature between 40˚F and 140˚F. When food enters the “Danger Zone,” the risk of foodborne illness accelerates quickly. Opened pepperoni that has been refrigerated can last for 1-2 weeks.

Pepperoni that is unopened can sit out at room temperature for up to one month. It is preferable that unopened pepperoni is put in the refrigerator to prolong its taste and freshness.

How Long Can Cooked Pepperoni Sit Out?

Some people think because you can eat pepperoni right out of the package that it’s cooked. It isn’t cooked.

It’s cured. But chefs cook pepperoni, and you wonder if it can be left out longer because it’s cooked.

No. All foods that sit out longer than 2 hours head into that dreaded danger zone that can cause you and your family some serious problems. While we mentioned the “Danger Zone” earlier, let’s dive in deeper.

How Long Can Cooked Pepperoni Pizza Be Left Out?

Pizza may seem like something you can leave out longer because it’s so hot when it comes out of the oven. But, if you think about it, pizza that sits out longer than two hours isn’t hot at all.

And unless you like cold pizza, which many people do, you will likely put it in the microwave because it’s room temperature, which is 68˚F, and smack dab in the middle of the “Danger Zone.”

All foods start to reach room temperature about two hours after they are left out. So stick to the 2-hour rule.

You can put a leftover pizza in the freezer but be sure to put a date on it, so you know how old it is when sifting, though.

How Long Can You Leave Pepperoni Rolls Out?

Pepperoni rolls aren’t much different than a pizza. They’re just smaller and pack the flavor in an easy-to-eat package.

Still, even though these little guys come out of the oven too hot to eat and you have to sit there and wait to chomp on that first roll, once they’ve been out past the 2-hour rule, they become a breeding ground for harmful bacteria.

How Long Can Pepperoni Sticks Sit Out?

Pepperoni sticks are a curious thing. They come individually wrapped and are sitting at the checkout stand at the gas station or grocery store most of the time.

You may be thinking to yourself, “Why isn’t that pepperoni refrigerated?” This is because they are individually wrapped in air-tight packaging. Your pepperoni sticks will last longer in the fridge.

How Long Can Opened Pepperoni Sit Out?

If you open that seal, you need to get your pepperoni back into the refrigerator within that 2-hour limit, so you don’t risk food poisoning.

You can reseal the original packaging and put it in the fridge or use a zip lock bag. Either way, it should be air-tight, so your pepperoni doesn’t dry out.

How Long Can Unopened Pepperoni Sit Out?

While stores let pepperoni wrapped in air-tight packages in the checkout aisle, the Food and Drug Administration is adamant that letting anything sit out longer than two hours is not safe. So how do the major manufacturers avoid this?

Companies that make pepperoni have approved packaging that will prolong the shelf life to get to the stores and on your table in good condition.

This packaging is created to keep out as much air as possible. This is a general rule of thumb when you want deli meats or perishable foods to keep their best quality.

Hormel pepperoni is packaged in the Pillow Pack®, along with a silica gel packet to keep out moisture.

We still suggest that once you get your groceries home, throw all your perishable food, including the package of unopened dry pepperoni, in the refrigerator.  And if the expiration date has passed, throw it away.

How Long Can Turkey Pepperoni Sit Out?

Since turkey is lower in calories, turkey pepperoni has become quite popular. Still, turkey is no different. Avoid the danger zone and get it into the fridge within two hours.

What Is The Danger Zone?

It’s worth repeating that the USDA identifies this zone as temperatures that fall between 40˚F and 140˚F. Foods left out at room temperature, typically 68˚F, will reach the lower end of this scale in about 2 hours.

Foods left out in hotter climates, 90˚F and higher to be exact, will reach 40˚F in about an hour, so you should put it in the fridge sooner.

When food is allowed to reach this zone, it becomes the perfect environment for bacteria to grow.

Some of the common culprits of foodborne illness are the following viruses and bacteria.

How Long Can Pepperoni And Cheese Sit Out?

Rolling provolone cheese and pepperoni are one of my favorite snacks.

But, both these foods are susceptible to entering that danger zone area after two hours, so it’s best to put the deli tray back into the fridge when that two-hour limit starts approaching. You can always pull it back out in thirty minutes if your guests are still hungry.

Can You Freeze Pepperoni?

Yes. Like other deli meats, you can freeze them if you cannot use them by their peak quality.

Pepperoni is not like average sausage because it’s cured, which means aged with spices to achieve excellent flavor.

We suggest you make the best of freezer time by using freezer wrap and getting it air-tight.

Air molecules will cause freezer burn. Also, be sure to date the package because things that sit too long in the freezer can take a turn for the worse.

Can You Freeze A Pepperoni Pizza?

You can freeze uncooked pepperoni pizza for weeks or months. Food lasts in the freezer for a long time, but if all you have is one slice of pepperoni pizza left, eat it or throw it out.

The best way to freeze a pepperoni pizza is to seal it tightly with freezer wrap and be sure to date it.

A Bit About Pepperoni

Now that we’ve covered all the scary aspects of leaving your pepperoni out too long, we thought we’d have some fun and educate you a little on this beautiful little meat that is more versatile than you might think.

Some sources claim that pepperoni is an Italian invention, while others claim it”s 100% American and inspired by other dried meats one would find in Italy.

Either way, it first made its appearance in the United States after World War I, and we have been thankful for it ever since.

While pepperoni is a common topping on pizza or stuffed into a calzone, there are so many other ways you can use it.

Dropping sliced pepperoni into the pizza sauce as it cooks on your stove is a great way to add spice and flavor.

The pepperoni doesn’t disintegrate, and you can put it on while assembling your pizza.

A turkey sandwich with a few slices of pepperoni is terrific if you’re a fan of spice. Add a few pepperoncini peppers, lettuce, and tomato, and your taste buds will become your best friends.

Tomato sauce is not only for pizza. Tossing some pepperoni in your marinara will take it up a notch, and give your family something to talk about at the dinner table. Kids will love it too because their spaghetti will resemble pizza.

When you add a bit of cheese and olives into your green salad, toss in a few slices of pepperoni. It goes well with any dressing and adds a bite to this healthy dish.

Cuisine fusion is very American, and this is a great way to have some fun with an American staple and Mexican cooking.

Flour tortillas would work best when melting cheese and pepperoni for tasty tortilla sandwiches. You can top them off with tomato salsa or sour cream.

Bake It In Bread

This isn’t as simple as throwing some pepperoni into salads or melting it with cheese, but if you are adventurous, you can create a bread dough and roll the pepperoni in it. Don’t forget the cheese!

Use It In Lasagne

Lasagne is an Italian dish that Americans love. Adding a layer of pepperoni on top of your ricotta mixture will be the talk of the dinner table, but it will also add a bit of spice to this traditional dish.

Put It On Burgers

Today they put everything on a burger: fried eggs, guacamole, and more. Burgers are a blank slate ready for flavor creations. Pepperoni will be almost like bacon but a little bit zestier.

Pepperoni is a versatile sausage, and you may be surprised at all the ways you can use it in your weekly menu, and not just on pizza.

Just remember, when it comes to leftovers, no matter the food, be sure to get it in the fridge and out of the “Danger Zone” before that two-hour limit so you can enjoy your meals and not worry about foodborne illness.